Coup under the banner of Savchenko 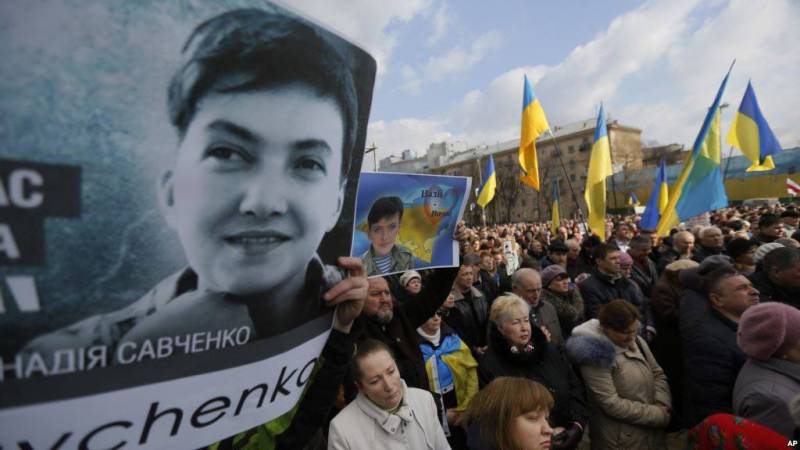 Strange история strange women in a strange state. Probably, it is possible today to briefly define what is happening in Ukraine in relation to the people's deputy, the hero of Ukraine Nadezhda Savchenko.

The coup d'état by a couple of fairly well-known people ... Pile weapons in the car of the popular Ukrainian "general in retirement" ... A mortar on the central square of the capital for shelling government buildings ...

Today, Ukraine is divided. Divided into those who unconditionally believe in the guilt of Savchenko and Ruban. And those who see the absurdity of the accusations and clearly protracted evidence of the prosecutor's office. 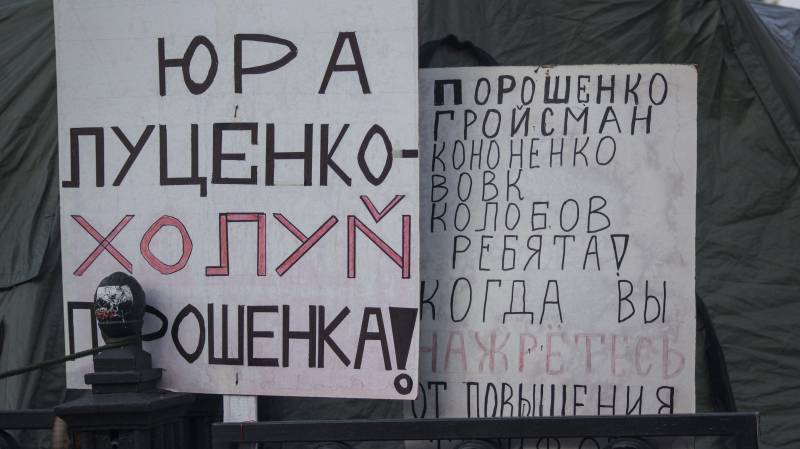 Among analysts, there are several versions of what happened. And some of them quite well explain the essence of the actions of Kiev. Others are clearly designed for mass consumption. It is necessary to introduce into the minds of people the thoughts for which the whole game was conceived.

First, about the punctures of the Ukrainian authorities in this matter.

From the moment Savchenko was released, it became clear to everyone that her, to put it mildly, extravagant behavior in a Russian court was not “heroism and contempt for the aggressor,” but a character trait.

If desired, the norm for this person.

And those sweets that were offered to her by the authorities rather confirmed the correctness of such behavior. Make a national heroine obedient Barbie doll failed. Neither Tymoshenko nor Poroshenko. 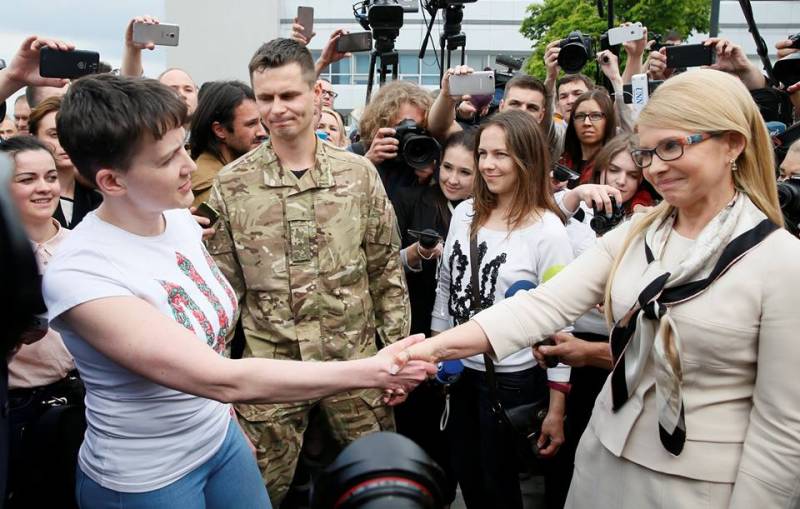 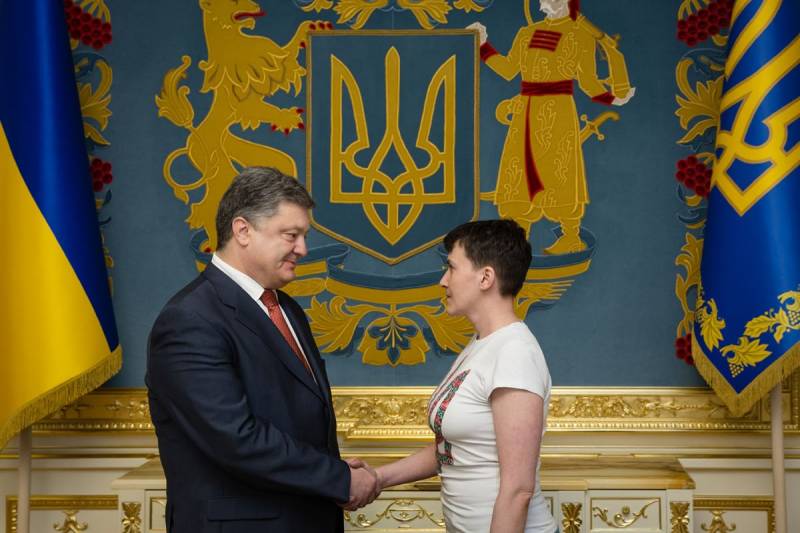 And it turned out that Savchenko does not fit into any of the existing political parties. The man is out ... Moreover, she is clearly trying to take the place of the national heroine. Heroines of the people. Heroine, which will be remembered even after death.

But - miscalculated. Nadia decided to play games with people who played at a professional level when she went to school. 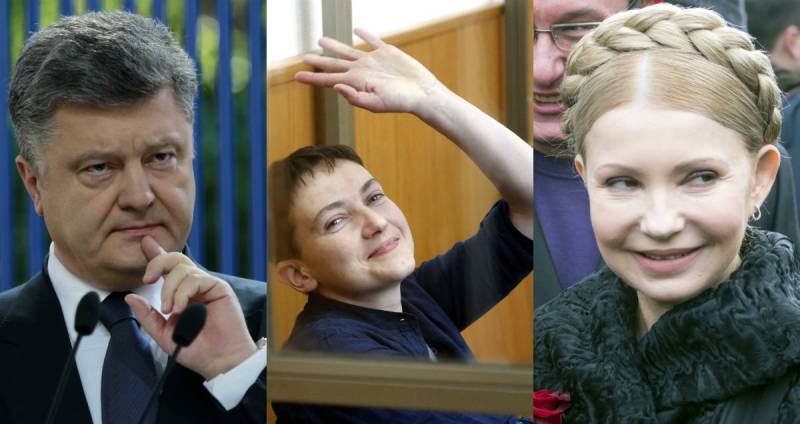 The campaign on the disappearance of an uncomfortable deputy inside the country from the media space of Ukraine is quite simple. Virtually no opposition media. The rest is well managed from government offices.

Once - and the deputy was not on the air.

Europe out of habit continues to listen to Savchenko. But what about that Europe, and who needs Europe now in Ukraine?

And Savchenko, respectively, is also not needed. For uselessness and intractability.

Plus, Nadia is still a “monkey with a grenade,” besides, do not understand what she did with her brains in Russia. Today, two years later, many are asking questions about this topic ... 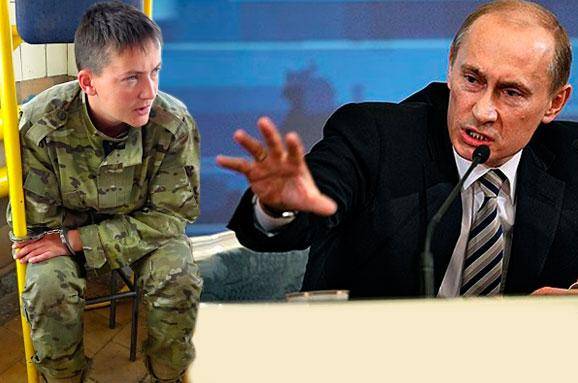 Thus, it becomes clear why this candidate is perfectly suited for the post of the head of the "bloody coup". Even the fact that Savchenko spends most of his time in Europe had to play into the hands of the authorities.

A normal person in case of danger of arrest would have to stay somewhere in Brussels and participate in the political life of the country from there. Elementary instinct of self-preservation. That was what the power was counting on. The mere fact that Savchenko would have remained in the EU would confirm her involvement in a hypothetical coup.

And therefore, in the Ukrainian media, there was a whole campaign to find a deputy. Today, they try not to talk about it, but before her arrival in Kiev almost all the leading media spoke of Moscow as the place where she went. Not Brussels, but Moscow.

Savchenko worked great. First, having arranged a photo session in the European Parliament, and he 146% in Brussels, but not in Moscow, there is nothing to cover. And then, knowing, in principle, what was going on, he nevertheless returned to Ukraine.

Why was such a complex multi-purpose designed? In order to assure people of preparing a violent overthrow of power? To discredit possible election candidates? To stimulate the interest of Europe and the United States to Ukraine?

The most popular version is the beginning of Poroshenko’s election campaign. We have already written about how the sociological services of Ukraine became active right now. Surveys are conducted almost weekly. The ratings are analyzed in the presidential administration of Ukraine, in the headquarters of political parties and movements, and in academic institutions.

A worthy version. Indeed, prepare a sleigh in the summer, and a cart in the winter. President for the year can really tarn any competitor. Resource is enough. However, if you think about it: can we today name at least one Ukrainian politician or public figure who would not be suspected of working for Poroshenko? Are there any who remained "white and fluffy"?

The main competitor of the current president today is Yulia Tymoshenko. That it is today in the lead. And, theoretically, Poroshenko is interested in reducing its rating. And practically? We understand perfectly well that there is enough compromising power on Tymoshenko. And the only thing that can stop the discharge of this dirt at the right time - how to react to it overseas.

How can this be related to Savchenko? Again, theoretically. First, the scandal today can be turned into peremoha tomorrow. Imagine a situation where after a few months of investigation it turns out that Savchenko is not guilty. Today the rating is Hope 0%. And after the triumphant victory over the prosecutor's office?

To win the presidential election, she still can not. But "knock out of the saddle" gas princess - completely.

Beat that takes away a certain number of votes. Thus, it is possible to come to the idea that the "bloody coup" is the work of hands, or more precisely the brains, of the Poroshenko administration.

Secondly, if the court still finds Savchenko guilty, the competitors will surely remember the list of “Batkivschiny” at the last elections to the Rada. After all, the fact that the first number there was Nadezhda Savchenko, then another "prisoner of the Russian KGB", provided the union with a sufficient percentage of votes for the election to the Rada deputies.

And third, Savchenko is not just tied to Ruban. It was Ruban who was rather successfully engaged in negotiations on prisoners. And who else has dealt with the prisoners? And engaged much more successful president? Medvedchuk! Thus, 4 surnames are easily intertwined. Ruban, Savchenko, Timoshenko and Medvedchuk. And this is the "agent of the Kremlin." Probably, there is no publication in Ukraine that would not mention this name in such a context.

On the whole, it seems that the goal of this “successful operation of the SBU and the prosecutor’s office” is completely different. More precisely, the goal.

The first goal is obvious. The authorities, realizing that the government of the country is being lost, thus warns competitors about the possibility of a forceful solution. About "tightening the screws", if you like.

And the second goal. Alas, the goal is trivial. The country today is in a deep economic crisis. Socio-economic problems are so deep that it becomes difficult to keep silent about them. Increasing tariffs and prices, unemployment, hryvnia depreciation, the outflow of the working age population.

Add to this the national debt and the need to pay interest. Add IMF requirements for unpopular reforms. Add permanent deferments of trenches. After all, all this will directly affect every Ukrainian.

In any case, what began today in Ukraine is the beginning of a whole chain of events.

What will be the final today is difficult to predict. Too many components, Ukraine’s dependence on the actions of outside players on the world stage, including Russia, is too great.

Let's just say: Russia's interest here is even greater than that of the United States. Why? Yes, everything is simple. Zoo anyway, sooner or later it will be necessary to close for major repairs. The main thing here is not to miscalculate, not to sell too much and not to spend too much.