In the US, fighting with the dead. Operation "Zebra" and the fight against the monument

March 26 2018
14
Moscow’s relations with the West (especially with Britain and the United States) are dramatically exacerbated. Syria, Ukraine, “intervening in the American elections,” “The Case of Violin,” and so on, are pretexts for fomenting Russophobia in the form of Pandora’s box. That Britain sends Russian diplomats and persuades other EU countries to take a similar step, then the United States is willing to follow a bad example. One gets the feeling that there was no cooperation period between our countries.


But he was when the anti-Hitler coalition existed during the Second World War. Now in the USA and in some other countries it has been decided to deny the decisive role of the Soviet Union in the defeat of Nazi Germany. Well, the response of many citizens of Russia is understandable: we often exaggerate, saying that only “canned cans” came from our allies. Of course, this understatement has its justification: it is unpleasant when they lower the huge price that our people had to pay for this Victory.

But, in fairness, the real help of the Allies was, after all. In particular, high-quality and modern at the time military equipment came from the United States. For example, the seaplane "Catalina" (and their improved version of "Nomad"). Soviet pilots were trained in the management of these machines in the US city of Elizabeth City. After that, seaplanes (which were called “flying boats”) were distilled in the USSR. It was a secret operation until recently called “Zebra”. It was declassified in the USA only at the beginning of the 90s, and in Russia - in the 2007 year. Of course, the United States did not supply seaplanes and other things for "beautiful eyes." weapon, and counted on the help of the USSR in the war with Japan.

Operation Zebra began in the summer of 1944. Within its framework, the Americans transferred over 160 amphibian aircraft to the Soviet Union. It was not safe to overtake planes from the United States to the USSR — adverse weather conditions, the likelihood of being hit by the enemy ... I had to follow difficult long routes, landing at the air bases of the allied countries. Therefore, the crews included navigators and boardradists, mostly British. They flew with Soviet pilots to Reykjavik, and then returned to the United States.

During the time that Operation Zebra lasted, two crashes occurred, as a result of which 11 pilots were killed. One of the crews, which followed to Murmansk, crashed in the northern coast of Norway. Famous names of the dead: N.P.Romanov, V.N.Vasilyev, I.F. Moscepan, A.M.Skvortsov, K.Chichkan and N.Ye. Kuznetsov. The bodies of the last two were not found. The rest were taken for American pilots and buried in Belgium. Until recently, they were considered missing.

Another tragedy occurred 11 January 1945 of the year. The Catalina, which took off from the aerodrome in Elizabeth City, crashed into the nearby Pasquotank River. Four Soviet pilots were killed: N.M. Chikov, V.M. Levin, D.M.Medvedev, A.I. Borodin, as well as an officer of the British Air Force, a Canadian citizen Nataros Peter.

But back in our day. After Donald Trump was elected president of the United States, there was a faint hope for at least a relative normalization of relations between Moscow and Washington. And in May, 2017, a good idea appeared: to install in the city of Elizabeth City (North Carolina) a monument to the pilots who died during the float of seaplanes.

Russia was supposed to make a monument. And the local authorities of Elizabeth City pledged to accomplish the improvement of the Coast Guard Park. It was there that it was planned to install a 25-ton bronze monument - three figures of the pilots of the allied states. 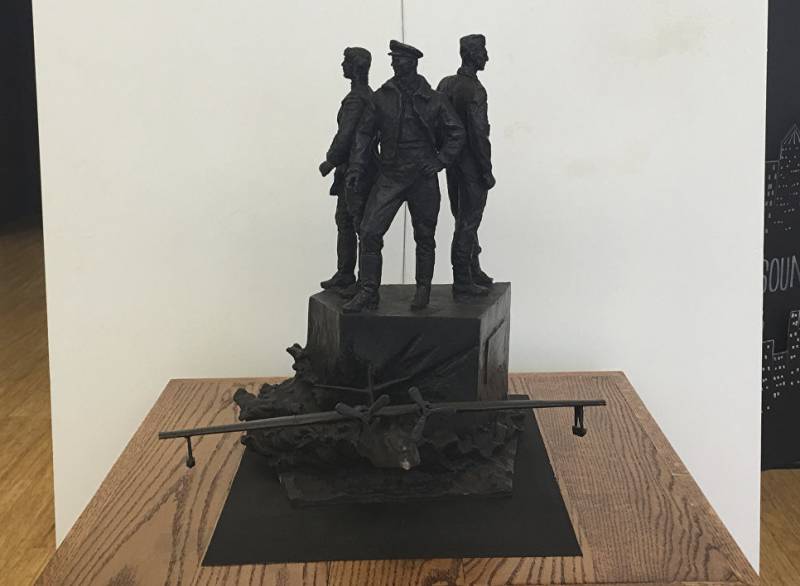 Last year, the Russian delegation led by the Deputy Head of the Defense Ministry to perpetuate the memory of those killed in the defense of the Fatherland, Andrei Taranov, was timed to coincide with the 22 Day of Memory and Grief in June. Then the parties, it would seem, finally agreed on the installation of a monument to the pilots. Representatives of Russia presented a draft memorial.

“Representatives of the mayor’s office and officers of the US Coast Guard base unanimously support the actions of the Russian side and promised assistance and administrative support in the installation of a memorial sign and a monument at the site of the death of Soviet pilots who died during the mission aviation technology ”
- then told Taranov, adding that this memorial would become an important landmark of Elizabeth City.

Less than a year later, it became clear that no improvement in Russian-American relations could be expected. The conjuncture has changed - the position of the American side regarding the installation of the monument has also changed.

The Associated Press recently published material on this topic, which states that a new vote was held in Elizabeth City. Five members of the city council spoke against the installation of a monument to the pilots (which, it would seem, have already agreed). Now only three support this initiative.

Those who opposed, do not even hide the fact that the whole thing is in a spoiled relationship. A member of the city council, Anita Hammer, said that she understood: it was about the memory of the heroes who died during the Second World War. She is also aware of the fact that there are American soldiers who are buried on Russian territory. “But now is another time,” she added.

What exactly does not suit those who voted against the memorial? It turns out that the fear of the mythical ubiquitous "Russian hackers" prevented. Another member of the city council, Johnny Walton, called Russia "the state of hackers." A monument compared with the Trojan horse. Say, these insidious Russians nashpiguyut his special technique that will help conduct cyber attacks.

There are, however, those who favor the appearance of sculpture in Elizabeth City. One of them is retired coast guard captain Tony Stimac. Previously, he was a member of the City Council.

“I know that now we are not in the best of relations with Russia, but she was our ally. It is about commemorating the events that happened 70 years ago ",
- he stressed. Moreover, in his opinion, it would attract tourists from Russia to the city.

Local activists collect signatures for the monument to be erected. As the Associated Press noted, this situation triggered a “miniature cold war in a small American town.”

It's a shame that in the USA, trying to spit in today's Russia and looking for various reasons for this, they are simultaneously fighting the dead. With those who died more than seventy years ago for the Great Victory. They certainly did not commit hacker attacks, did not poison Spy Slippery, but did their military duty, fighting and dying for the common cause.

Ctrl Enter
Noticed oshЫbku Highlight text and press. Ctrl + Enter
We are
Results of the week. "London, goodbye, time to go home"Bitter thoughts of the West. Will Russians poison Donald Trump and Theresa May?
Military Reviewin Yandex News
Military Reviewin Google News
14 comments
Information
Dear reader, to leave comments on the publication, you must sign in.