March 28 2018
17
As the large international shipbuilding group of companies Damen Shipyards Group reported on 26 in February 2018, it received a contract from Armscor, a South African procurement agency, which reports directly to the South African Defense Ministry to build three ships for the South African Navy. We are talking about the construction of three small patrol ships project Damen Stan Patrol 6211 length 62 meter. The construction will be carried out at the shipyard Damen Shipyards Cape Town (DSCT), located in Cape Town (the second most populous city in South Africa, the legislative capital of the state).


The shipbuilding group of companies Damen Shipyards Group is of Dutch origin. Its headquarters is located in the town of Gorinchem. Having become a large international group of companies doing business in the 120 countries of the world, it has not ceased to be a privately owned family company. She currently manages more than 40 shipbuilding and 16 repair and conversion shipyards around the world. Among the company's assets, there are dry docks measuring 420x80 meters. The total number of employees of the company is about 9 thousand people, of which only 3 thousand people work in Holland.

Damen Stan Patrol 6211 Small Patrol Ship, damen.com Renders
Currently, this company produces about 180 vessels of various purposes every year. The company develops and manufactures both civilian and military products. The policy of the Damen group of companies is based on the pursuit of standardization, the use of modular structures and the provision of a stock of finished vessels. This guarantees a short delivery time, low total cost of ownership and reliable operational quality of products, which allows maintaining a fairly high level of sales.

Among the company's products there is a rather extensive line of small patrol ships, which today are represented by 9 models. From a very small patrol vessel of the STAN PATROL 1204 project with a 12,6 length of a meter to the flagship of the Damen line of patrol ships of the company - the patrol ship of the STAN PATROL 6211 project, which has grown in length to the 62,2 meter. The case material is steel, the material of the superstructure is aluminum. The main mission of the ship is patrolling, ensuring the safety of the economic maritime zone, search and rescue of people at sea.

Damen Stan Patrol 6211 Small Patrol Ship, damen.com Renders
The features of the ship, the developer considers the excellent performance, which is achieved by a combination of excellent seaworthiness and a good arrangement of the wheelhouse. Separately, improved seaworthiness is also highlighted, the hull form provides the ship with good seaworthiness characteristics even at high speeds. Also to the advantages of the project include a high level of efficiency of the patrol ship. The long and narrow hull of the STAN PATROL 6211 guarantees the ship a very low resistance level, which provides excellent economy in the entire range of speeds.

As representatives of the Damen Shipyards Group shipbuilding group told 26 in February, a contract between the company and the South African defense ministry was signed as part of a project launched back in 2014 called Biro, initially involving the purchase of three large (Offshore Patrol Vessel - OPV) and three small coastal (Inshore Patrol Vessel - IPV) patrol ships. In February 2017, following the results of an international tender, the Damen group was selected as the main builder of both types of ships. Initially, the 85-meter 1800-ton patrol ship Damen 1800 Sea Ax was selected as part of the OPV program, but later the program to build three large patrol ships was abandoned, the contract was canceled for financial reasons. In the end, the contract was issued only for the creation of three small IPV patrol ships.

Damen Stan Patrol 6211 Small Patrol Ship, damen.com Renders
The South African Navy will be the first of the well-known customers of the small patrol ships of the project Damen Stan Patrol 6211. The ship of the designated project, similar to most other patrol projects developed and manufactured at the enterprises of Damen, has original outlines of the forward part of the hull with a vertical bow, which experts call "Ax Bow" (hatchet nose). This nose was originally created by Damen engineers specifically for high-speed transport ships like Sea Ax, which are widely used in offshore oil and gas production.

The length of the hull patrol ships Damen Stan Patrol 6211 reaches 62,2 meters, width - 11 meters, maximum draft - 4 meters. The power plant is a diesel four-shaft, the maximum declared power is 11 520 kW. The maximum travel speed is 26,5 knots, at this speed the ship can go up to 4000 nautical miles. Up to 62 people can be accommodated aboard the ship, including the crew and additional passengers. It is noted that in the 2014 year, as part of the Canter program, the DSCT shipyard (owned by Damen) built two raid tugs for the South African Navy under the Damen Tug 2909 project, the same shipyard will be engaged in the construction of Stan Patrol 6211 small patrol ships of the coastal zone. 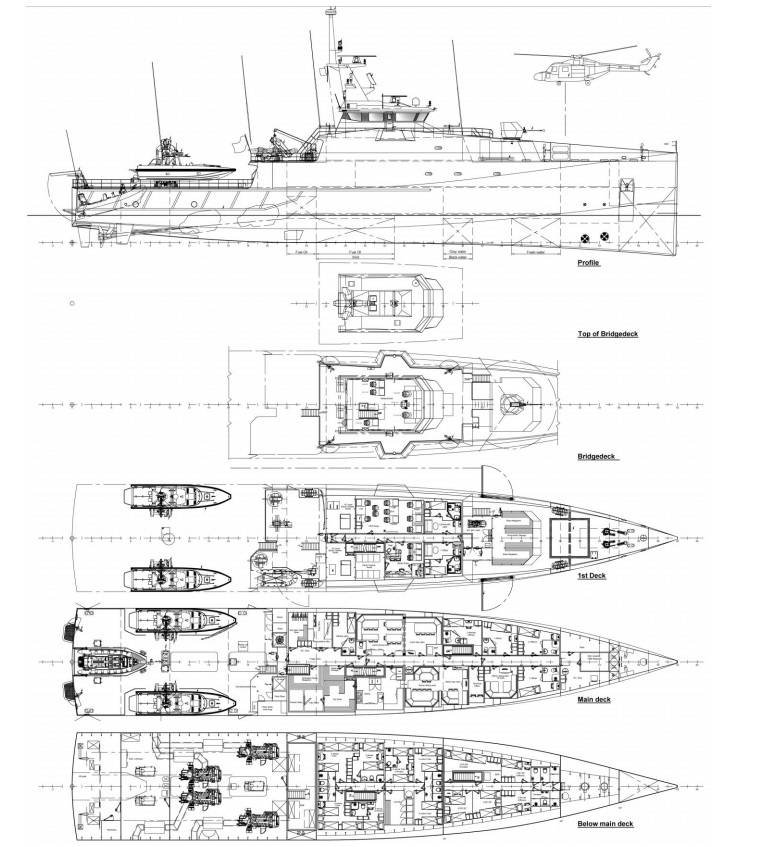