April 1 2018
15
A series of articles is devoted to the actions of the Russian cavalry in the Second Prasnysh operation February 7 - March March 17 1915 - one of the most brilliant victories of the Russian weapons over the German imperial army in the First World War.


One of the episodes — the actions of the 15 Cavalry Division — we considered earlier (see Polish attack of Ukrainian hussars). Now let us see how the detachment of V. A. Khimets acted — above all, the Cossack units that were part of it.

The overall situation in the theater to the beginning of the Second Prasnyshskoy operation.

By January 1915, west of the Vistula, a positional front had been established, and both sides were beginning to look for opportunities to use the flank maneuver.

Throwing their troops from the left bank of the Vistula and from France to East Prussia, the Germans planned to develop operations:

a) Against the 10 Army - striking Grodno. The correlation of forces - 15 infantry and 2 cavalry divisions of the Germans against the 12 Russian infantry divisions.

b) Acting on the line Osovec - Lomza. The ratio of forces is approximately equal - one and a half shells.

c) On the front from Torn to Mlava. The army group of M.K.V. Von Galvitsa initially had 3 corps and 2 cavalry divisions against 1 of the Turkestan and 1 of the Equestrian corps. The ratio of 3: 1 forces in favor of the Germans, but, according to E. Ludendorff, additional forces were pulled here - and by the end of the 10 operation, the German divisions were opposed by the Russian 6,5. But ... Galvitz was broken.

The balance of forces clearly tells us where the Germans were actually striking the main blow - and his success would have put the Russian Hungarian armies in a much more difficult position than it happened later - in July 1915, when the Germans succeeded in the same direction. It becomes clear why the French called the Second (Winter) Prasnysh operation “Russian Marna”.

But let's not get ahead.
The Russians also concentrated their forces between Osovets and Novogeorgievsk - but slowly, and by the beginning of the operation the 1 and 2 Siberian army corps and the 15 cavalry division were located as reserves.

Private situation to the beginning of the operation.

The 1 th Turkestan army corps covered the approaches to Novogeorgievsk, having the right flank at Grudusk, and the left flank at Glinojeck. Next to the Vistula stood 1-th Horse Corps. On the contrary, with headquarters in Mlawa, stood the German corps of E. von Tsastrova. 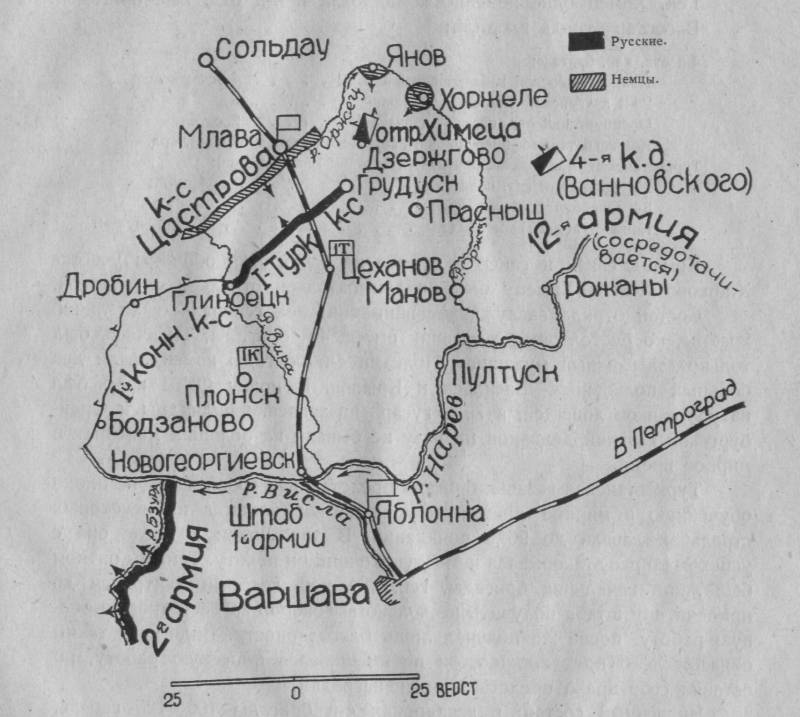 Both sides covered the future areas of concentration of their troops - and the Russians found out about the concentration of the Germans much later, from intelligence sources. Naturally, the task of the cavalry, which was part of the 1 of the Turkestan Corps (detachment of Lieutenant-General V. A. Himets), was also defensive and was formulated as follows:

“To ensure the right flank of the corps, occupying the Dzerzhgovo-Shumsk area and not allowing the enemy to the Zharkovo-Kitki area. To scout in the directions to Mlawa, Yanov and Khorzhele, including defensive directions Yanov - Prasnysh and Khorzhele - Prasnysh ”. 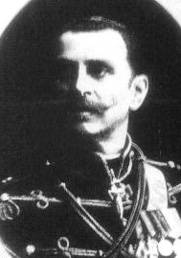 2. The commander of the 4 th Separate cavalry brigade and Detachment V. A. Chimets.

The order was given when the detachment of V. A. Himets, consisting of the 4 th Separate cavalry brigade with a battalion of riflemen, doubled: the Turkestan Cossack brigade arrived, and it is surprising that it was signed by a cavalryman (commander of the 1 Turkestan general sent a letter S. M. Sheydeman): after all, being in Dzerzhgovo, you cannot defend the directions from Janov and Horzhele to Prasnysh, and you cannot stand in Dzerzhgovo to defend them. The correct decision would be to entrust the protection of the flank of the corps of one, and the rear - another brigade (but apparently affected the magical "principle" of massing cavalry - which was good for the attack on Mlava, but bad for the protection of different directions).

The squad of V.A. Khimets.

The squad of V. A. Khimets, which after the arrival of the Turkestans (January 20) turned into a division, included: 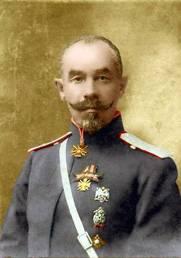 3. Commander of the Turkestan Cossack Brigade A. M. Loginov.

There were no communication teams and a sapper in the detachment. For the defense of the Zharkovo-Kitki sector, V. A. Khimetsu was given a battalion of riflemen with a battery.

Describing the part of the squad, it is necessary to note the following.
In the regiment of the officer's cavalry school (OKS) 75% hussars were called up from the reserve. The Finns and the Orenburg Cossack Division in peacetime have never been to large maneuvers. At the same time, the Turkestan Cossack Brigade was a well-trained part with peacetime training (its machine-gun crew at some firing gave up to 96% of hits). In the days of the Lodz operation and later the Turkestan Cossack brigade successfully and repeatedly attacked the German cavalry and infantry.

Fighting before the operation.

The location of the detachment is shown in the following diagram. 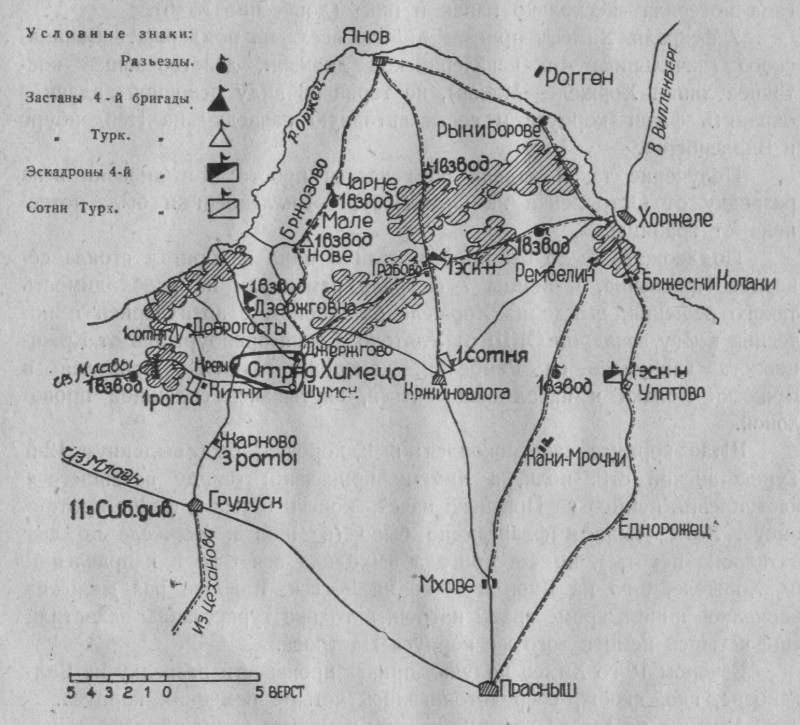 4. The location of the detachment of V. A. Khimets on the right flank of the 1 of the Turkestan Army Corps is from January 20 to February 7 1915.

In total, 8 of hundreds and 6 of separate platoons — that is, half of the detachment — were sent to reconnaissance, escort, and the duty unit every day, and often the banners of the regiments of the Turkestan brigade were guarded by adjutants, and the staff carrying the guard carried the guard.

Since the 4-I brigade stood in the area for more than two months and the German position did not change, intelligence turned into observation, and the intelligence agencies stood in one place for weeks. Security, separate outposts, consistent with German practice - to move only along the roads. It turned out a double lane outposts.

Until the end of January, there were several minor clashes with German intelligence officers - in which the Turkestans took four prisoners. 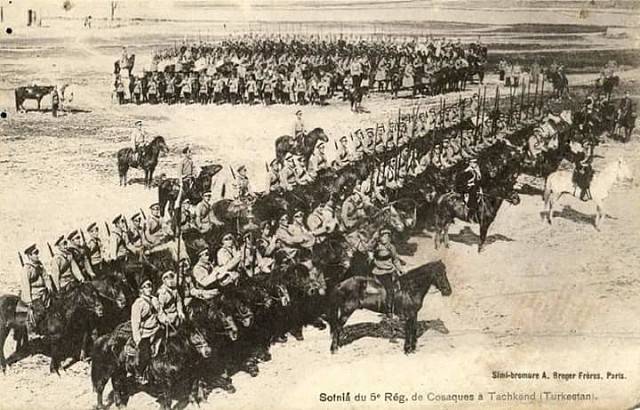 On January 25, V. A. Chimets received an order to support units of the 4 Cavalry Division operating east of the Khorjele-Macov line, without losing sight of the main task - to guard the flank of the corps and conduct active reconnaissance on Neidenburg and Willenberg.

Obtaining such a task is explained by the fact that the 4-division conducted reconnaissance from Ostrolenka to Ortelsburg-Willenberg and was pushed out from the border. It would be easy to support her if one of the detachments of the Detachment, V. A. Khimets, stood north of Prasnysh, and the Germans hinted at the need for such a solution, leaving the Horzhele battalion with artillery and pushing the OChS squadron to the south. A hundred of Orenburg citizens moved from Krzhinovlog to Remebelin - and the German battalion returned to Brzeski Kolaki and began to dig in, wrapped in a continuous curtain of barbed wire.

The corps headquarters became worried: the 12 th Turkestan rifle regiment was advanced to Edorozhets, and V. A. Khimets was ordered: “in view of the beginning of the German offensive on Prasnysh, begin the search for rear and flank of the enemy”. Although there was no “rear and flank” (there were two battalions of infantry in Yanov and Khorzhela), but the 4 I brigade went out in the direction of Khorzhela - Yanov and Roggen. Each time the search ended to no avail. The Turkestans seized four more Germans from the corps of Tsastrov.

In the evening of January 28, V. A. Chimets received an order to reconnoiter Villenberg - where, allegedly, four German corps were concentrated.

Aviation she didn’t fly - neither Russian nor German - and the Turkestans received an order: to speak on Ednorozhets at dawn on the 30th. The chief of staff of the Turkestan brigade intended to go around Jorgele from the east and release a series of patrols - to capture languages. But on the 29th, V. A. Khimets received accusations of inaction from the Commander and ordered a "dashing raid" to break through the German guards and capture Wallenberg.

On January 30, the detachment of V. A. Khimets under the guise of the 12 of the Turkestan Rifle Regiment spent the night in Edorozhts. In 4 hours of January 31, cavalrymen marched on Olshevka - Rakuyka - Laz, having a platoon of Oksh in the vanguard. The roads were icy and the troopers walked at a speed of 4 miles per hour.

From Rakuyk, V. A. Khimets sent three hundred Orenburg residents on Khorzhele - to cover the detachment on the left, while he himself moved on to Montvitz and went to the edge of the forest stretching along the border. 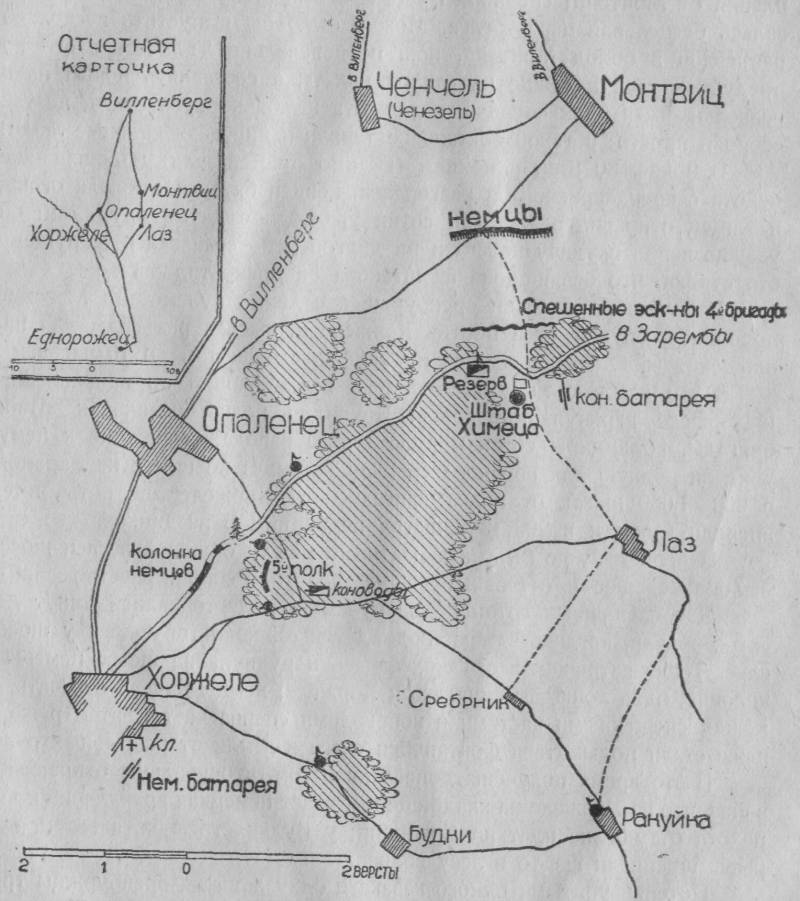 The 4 Brigade was met by fire from the Germans, who were sitting behind barbed wire in front of Montvitz - it was not possible to achieve surprise.

In 9 hours 30 minutes to the Germans came more infantry and artillery. The fight flared up. The horse battery opened fire.

By 8 hours, three hundred Orenburg residents with two machine guns approached the edge of the forest against Horzhele and, sending patrols to observe Opalenets, the Booth and Rakuyka, stood there until the 10 clock.

At 10 hours, the regiment commander, brigade chief of staff, commanders of hundreds and machine-gun platoons saw the following picture: from Khorzhele, two enemy companies moved along the Zaremba highway - a group of 6 horsemen were ahead. The first Russian thought was to attack, but between the edge of the forest and the highway there was a frozen and thawed marsh. We decided to shoot the enemy column.

Two dismounted hundreds and two machine guns were waiting for the riders to approach the fir tree sticking out along the highway. As soon as the Germans came up with this landmark, fire was opened - and the German column remained on the highway. The Germans began to respond, and between the dismounted parts and the grooms began to rise fountains of snow and earth - from explosive bullets.

At that time, reports were received that the Urals had been sent to Laz, German artillery was leaving Hororel, and infantry were moving from there to Srebrnik.

Having lost one Cossack and one horse killed, the Orenburg citizens set off on Laz - Rakuyku - in order to prevent the Germans from attacking the detachment from the rear.

Parts of the brigade moved away.

But the wire obstacles did not give the detachment the opportunity to break through the guard of the enemy in the equestrian system. The dismounted cavalrymen, even using 1000 rifles, could not compete with the strong German garrisons of Horjele or Montvitsa.

Ctrl Enter
Noticed oshЫbku Highlight text and press. Ctrl + Enter
We are
140 years of the heroic defense of ShipkaVoenkor "Mag" about the situation in the Donetsk Republic
Military Reviewin Yandex News
Military Reviewin Google News
15 comments
Information
Dear reader, to leave comments on the publication, you must sign in.