Where female “Batalon” strides: what remains behind the scenes

March 28 2018
28
As is often the case, an informational occasion has led to a chain of different social and regional initiatives. A kind of catalyst in this case was the movie "Battalion", released on the screens of the country in February 2015. 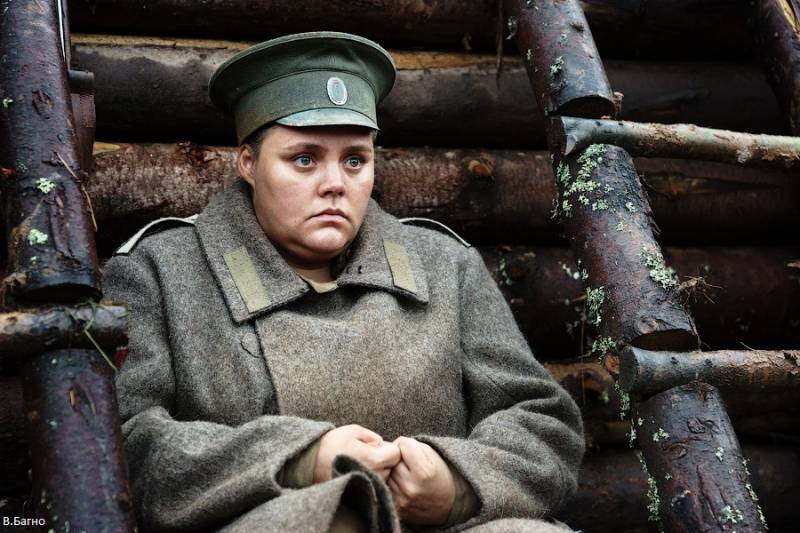 The film directed by Dmitry Meskhiev takes the viewer to the distant events of a hundred years ago. The plot focuses on the “female death squad” led by Maria Bochkareva. Enough time has passed since the release of the film to try to analyze what was seen on the screen and compare it with real historical events. Emotions calmed down, disputes calmed down, impressions from watching the movie with the audience settled down.

Who wanted, already looked it. Someone liked the film, some did not. Here it’s a matter of taste and interest in the country's historical past. To some he seemed to be of little interest and they just missed it. But in any case, all this demonstrates the audience position in relation to the film and the historical authenticity of the film version of those distant events. And even a refusal to watch movies is also the attitude of our contemporary to the hectic revolutionary events of 1917 of the year.

Those who liked the movie, do not need our comments. They had the impression of watching a movie. And it suits them perfectly. Otherwise, this part of the audience would look for answers to the questions that arose when watching a movie.

For some part of the audience, the film “Battalion” became just one of the recent ones and did not cause any special emotions or specific questions. Perceived as an ordinary event.

But there are other viewers who show a true interest in the study of Russian history and have a certain reserve of knowledge and facts about the events of 1917 of the year. Among them there are many who meticulously try to get to the truth and separate real historical events from deep-rooted social myths, distorted by people and the time of facts. The task is not easy, since many historically deformed or completely distorted facts have been moving from book to book, from newspaper and magazine publications to pages of Internet portals for decades. They are circulated in television shows, in documentary and feature films dedicated to the fate of Maria Bochkareva and other female volunteers in an era of revolutionary upheaval with persistence worthy of better application. And as a result, the female "Battalion" continues to march away from the road of a real HISTORY.

Of course, the film "Battalion" is a work of art. The scriptwriters, director and producers fully realized their right to artistic fiction and their own interpretation of historical events related to the personality of the volunteer commander and the First Women's Military Team of the death of Maria Bochkareva formed by it. In this case, the name "Women's Death Battalion" was used in the 1917 year only for propaganda purposes, since it did not correspond to either the battalion structure or the size. According to these indicators, the female team of death Bochkareva was not quite suitable even for the company level. And although the representatives of the authors of the film crew repeatedly stated that the plot was as close as possible to the real fate of people and historical events, they did not fully succeed. Hence, those censures on the historical outline of the events shown, and frank “kinolyaps”, which, apparently, cannot be avoided during any shooting of films on historical themes. Inaccuracies in the presentation, and, sometimes, significant distortions of historical events and facts from the pages of the book, considered to be the memories of Maria Bochkareva in someone else’s presentation, migrated to the screen. This is the book “Yashka. My life is a peasant woman, officer and exile "(hereinafter -" Yashka "). This topic, in our opinion, requires a separate discussion. In the meantime, we will confine ourselves only to assigning the book of memoirs of M. Bochkareva to sources that need clarification and additional verification of the facts and descriptions of specific historical events contained in it.

Returning to the “Batalon” tape, we note that the film really holds the viewer in emotional tension. The rapidly developing events related to the fate of young women and girls who have risen to weapons in the hands of the defenders of the motherland, capture the viewer. They make you worry about them, worry about them, be proud of their actions. For most viewers, especially young people, the main thing is a tense plot, a spiral of events and impressive special effects on the screen. Against this background, the understanding of the fact that young volunteer ladies are dressed in overcoats, while real events took place in the summer of 1917, somehow goes away. And they are placed in the film in Petrograd in the Engineering Castle, where the Bochkareva female formation never happened. It housed the First Petrograd Women's Battalion under the command of the staff captain of the Life Guards Keksgolmsky Regiment Loskova. And it was a completely different female volunteer formation, created in full compliance with the requirements of the provision “On the formation of military units from female volunteers”. The document was approved by the Military Council 29 June 1917 of the year. The women's volunteer formations established after this date were legally part of the Russian army and underwent longer training in infantry training programs, taking into account the military practice of those years. In October, 1917, the company of this particular women's battalion, was fraudulently brought to the defense of the Winter Palace. But this is a completely different story, in no way connected with the fate of the female death team of Maria Bochkareva.

A significant part of the events shown in the film was far from the real story. Here are some more examples of inaccuracies in just one day. At the presentation of the banner of the women's death team shown in the film, which actually took place on 21 on June 1917 of the year (again in the summer without overcoats), there was no War Minister A. Kerensky. From June 14 until the end of the month, he was completely absent in Petrograd. The commander-in-chief of the troops of the Petrograd military district, General P. Polovtsov (sometimes mistakenly referred to as Polovtsev), dressed in a film in a general's overcoat, preferred to wear a Caucasian-style military uniform, in which he was actually on that day when presenting the banners to the female team of death and detachment disabled volunteers. But the audience at this event was much more, judging by the published photographs of the time. The filmmakers have repeatedly saved on extras. And there are a lot of such deviations from historical realities in the film. However, the general patriotic concept and the heroic plot of the film to a large extent smooth out all these historical inaccuracies and inappropriate details.

V. Putin was watching the film among the first viewers. According to the press secretary D. Peskov, the president liked the picture. Later, at a meeting with the film crew, the president confirmed his positive impression of watching the film. The film itself, actors, director, producers and other members of the film crew deservedly received various awards in many categories. It should be noted that several films about female volunteers of that time had already been shot before, but they did not have such success with the audience. Therefore, the film "Battalion" can be easily attributed to the monuments of culture and art in the form of a film, which perpetuates the feminine patriotic impulse and readiness to sacrifice life to defend the Fatherland.

A series of round dates devoted to the first 100 anniversary of the First World War, and then the centenary date of the October Revolution, in which the movie “Battalion” fit into the framework of memorable events, intensified the work of local history and other public organizations. A number of Siberian organizations initiated a discussion of their proposals to perpetuate the memory of Maria Bochkareva as the heroine of that distant war and an active participant in the fateful events for our country. In terms of specifics and implementation options, these proposals envisage a wide range of actions - from the establishment of monuments to the installation of memorial plaques on buildings and the renaming of streets.
However, the joint work of local historians, search engines and historians, we think, is yet to come. Restoring the chronology and description of real historical events involving female volunteers in the battles of the First World War and the Civil War, it would be right to devote individual pages to the most interesting or little studied people, for example, M. Bochkareva, M. Skrydlova, A. Palshina, L. Mokievskaya- Chive and others. At the same time, they do not separate them by decades-old stereotypes and ideological cliches on red, white and other “color” in the palette of political and ideological shades. All of them became victims and hostages of those impetuous events and ideological differences. They all fought for Russia, for its future power and prosperity. They saw only ways and means of achieving their goals in different ways. Yes, and these goals themselves were also different, and, sometimes, just the opposite.

The stronger the truth is no support

With all its inaccuracies and inaccuracies, the film “Battalion” stirred up the mass consciousness and fueled the interest of our contemporaries in those distant events. Since then, a century has passed. Several generations have changed and much has changed in our lives. Serious changes occurred in the assessments and perceptions of those distant and, at times, bloody events. Now, in our opinion, there is a favorable situation for the gradual smoothing of the historical and ideological confrontation between the red and white. And this should be done jointly, moving along the path of harmonization of the public consciousness.

With a view to historical reconciliation between representatives of various ideas and attitudes, strengthening intergenerational ties within Russian society, it is time to think about devoting our historical and cultural monuments and memorials not only to specific, albeit honored persons, but to all women soldiers distinguished themselves in the period military service in different periods of national history. And on the memorial plaques and memorial signs indicate their names, regardless of their political views and ideological positions. At the same time, it is necessary to consistently restore the historical accuracy of the events described, the reliability of the facts and biographical information.

And since in our case we are talking about the difficult fate of Maria Leontyevna Bochkareva, we will immediately note that there is still no complete and reliable biography of this courageous woman - officer. Many gaps can help fill, first of all, local historians and local historians of those regions that were somehow connected with her life and destiny. It is not only about the Petrograd, Tomsk and Krasnoyarsk periods of her life. In our opinion, its one-year stay in the Northern region is not enough. Moreover, even the birth date of Maria Leontievna has not yet been documented. Only month and year are known from her words.

Much of what is published today in various publications is often far from the truth and only replicates certain fragments from the book of her memoirs Yashka and the interrogation protocols in the Cheka. It is still not known for certain where, when and how the difficult life of Maria Leontyevna Bochkareva ended. Such uncertainty gives rise to various conspirological versions and assumptions that are not supported by documents and facts.