March 30 2018
92
The South-Western (Galician) theater of military operations in the 1914 campaign on the Russian front of the First World War was the main one. In this theater, almost 2 / 3 of the Russian armed forces and 4 / 5 of the Austro-Hungarian armed forces were collected. The Russians concentrated 20 cavalry divisions on the Galician TVD, and together with the Cossack units of the second stage, more 85000 sabers. Austro-Hungarians concentrated 10 cavalry divisions, and together with the military cavalry - more than 40000 sabers. The actions of these masses of cavalry could determine the fate of the entire campaign. But did they pass the exam during large-scale, maneuverable military operations at the most crucial stage of the war?


After the declaration of war, cavalry of both sides turned along the border - from Lublin to r. The Dniester is generally evenly distributed throughout the theater, in the form of a curtain with a total length of more than 400 km, with the task of covering up the concentration and deployment of its armies. In addition, each of the deployed armies received: cavalry (Cossack) divisions from the Russian - 4 armies on 4-5, from the Austro-Hungarians - 4 army on 2 - 3 cavalry divisions. After the declaration of war 1, the Austro-Hungarian and 8 Russian divisions in the theater of operations were still absent (on the way to it or mobilized - in particular, second-priority Cossack divisions).

Acquaintance with the scheme number 1 shows that when forming their cavalry groups, the parties showed a lack of understanding of the nature and nature of this type of troops. This was the first examination of the Russian and Austro-Hungarian General Staffs on the course of the use of cavalry - in the theater of operations, which allowed the use of large masses of cavalry. 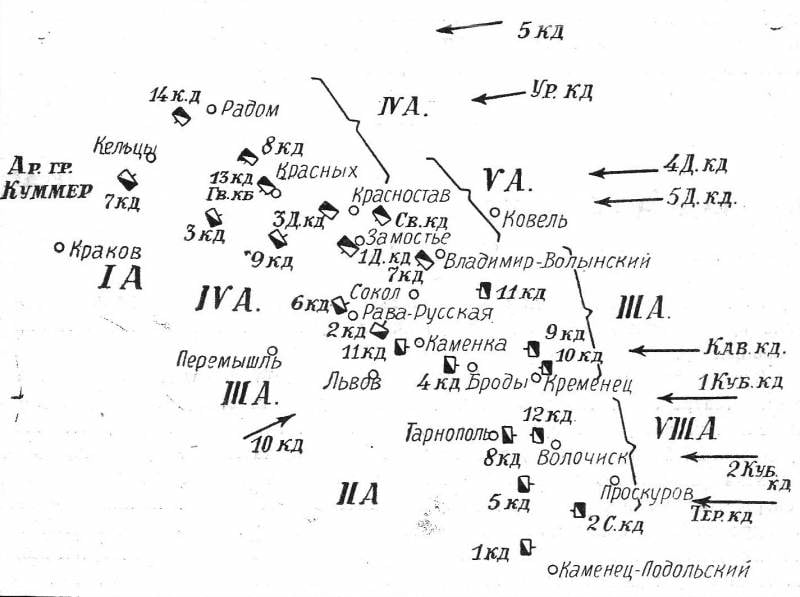 Scheme number 1. Grouping cavalry in Galicia in the initial period of the First World War.

The cordon of patrols, field guards and outposts set up and sent out by the cavalry, in essence and in form, looked like a kind of change of the border guards or the second line of the border cordon - intended to catch smugglers. This cordon could be broken anywhere. 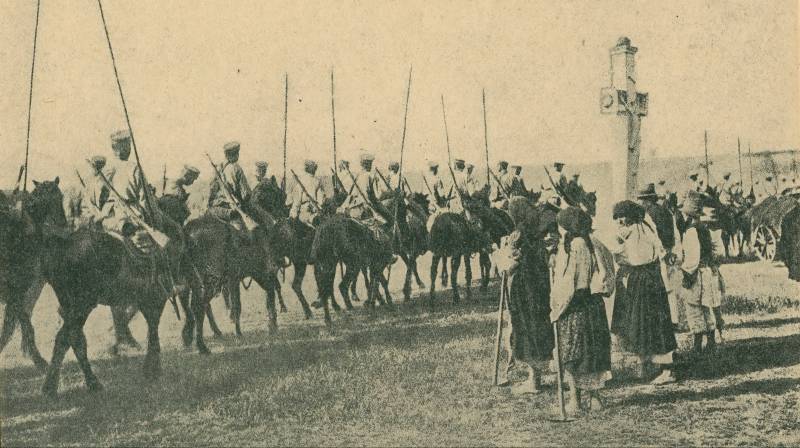 Having set up a cordon, the cavalry organized reconnaissance, sending out separate patrols and reconnaissance squadrons according to the regulations, which were designed to reveal the enemy grouping. These patrols and squadrons, naturally, could not seriously delve into enemy territory, either because of quantitative weakness, or because the charters established a certain standard for removing the separation from the main forces. And since the main forces of the concentrated and deployed armies were in 4 - 6 transitions from the border, then, of course, patrols and reconnaissance squadrons could not reach them - especially since the enemy's outposts and sentries stood along the roads and key areas. Incidentally, Austro-Hungarians armed and loyal local residents - and the latter met with fire the Russian cavalrymen who arrived in the border villages for intelligence information from the local population. 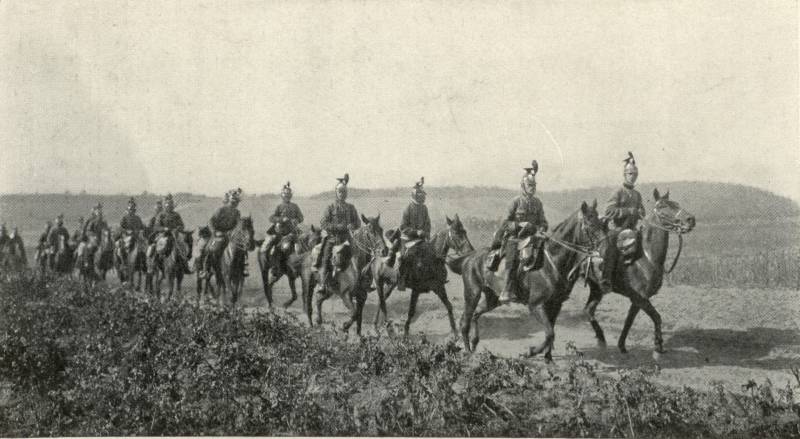 Naval outpost of the Austrian cavalry.

29 July 1914 The Austro-Hungarian cavalry was given the task of producing operational intelligence — it was to identify the location and grouping of the Russian troops.

Performing the task, the Austrian cavalry crossed the Russian border and in the border zone came into contact with the cavalry curtain of the Russian cavalry - which by this time also received the task of producing deep reconnaissance.

The 14-th Cavalry Division operating on the extreme right flank of the South-Western Front, conducting reconnaissance to the west of Radom, established that there are no large enemy forces in close proximity to the border. In this area, the compound encountered the 7 of the Austrian Cavalry Division, but the collision was indecisive - both divisions were limited to observation. August 4 Austrian 7-I cavalry division with the support of infantry occupied the Kielce - also setting the absence in the area of ​​large enemy forces.

1 August The 1-I Don Cossack Division crosses the Austrian border, occupies the Belz and Naral area, where it meets reconnaissance units of the Austrian 6 Cavalry Division. And here both the Donets and the Austrians confined themselves to mutual observation.

The exception was the actions of the joint cavalry division (2-I and 3-I separate cavalry brigade). 7 August This division broke through the border at Rava-Russkaya, advanced to Kamenka, 8 August destroyed the bridge over the river. Bug, and dispersed small parts and rear Austrian 2 th and 11 th Cavalry Division. But, turning to the northeast of Kamenka, she came across the rangers 2 battalion of jägers and border units and, failing, moved away. As a result of these actions, it was established that large Austrian forces are absent northeast of Lviv.

August 3 Austrian 2-th cavalry division, reinforced by the rangers 2 battalions, made a raid on Vladimir-Volynsky, patting the 62-th infantry regiment and, satisfied with this success, returned to its territory. A day earlier, the Russian 7 Cavalry Division made a raid on Sokal from Vladimir-Volynsky - she had a skirmish with a company of Austrian infantry, seized several abandoned carts and returned back.

Russian 11-I cavalry division, aimed at Busk, could not break through the Austrian veil and did not get any information about the enemy. 9-I Cavalry Division worked similarly.

The Russian 10-th cavalry division in the Kremenets area during the battle in the Tarnopol region established the presence of the Austrian 11 corps.

On the Volochysky direction, the Russian 12 and Austrian 8 cavalry divisions mutually constrained each other and, like the other divisions, did not dare to conduct serious attacks.

In the direction of Gorodok, the Austrians abandoned the 5 Cavalry Division, which met at the Gorodok with the 2 Joint Cossack Division, supported by infantry. There was a serious battle - during which the Austrians were defeated and retreated. Cossacks remained in the town. 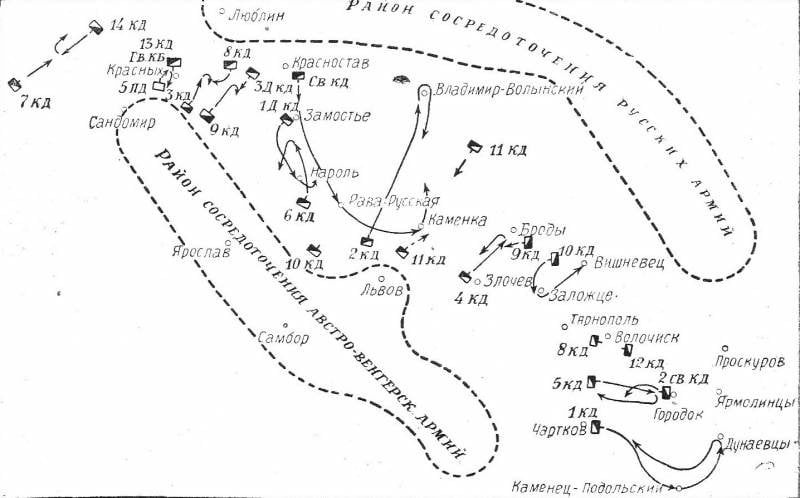 2 schema. The actions of the Austro-Hungarian and Russian cavalry in the initial period of the war in Galicia.

The Austro-Hungarian command was especially interested in the southern flank of the Russian South-Western Front. The fulfillment of the reconnaissance task was entrusted to them by the 1 Cavalry Division, thrown through Kamyanets-Podilsky on Dunaevtsy. Having broken through the cordon of the border guard Kamenetz-Podolsk, the Austrians reached Dunaevtsy - without meeting significant Russian forces here, and, therefore, without feeling for the left flank of the Russian 8 Army.

Thus ended the work of cavalry in Galicia at the stage of deployment and concentration of enemy armies. The cavalry of both opponents, although they worked a lot, could not fully give everything.

The Austro-Hungarian commander-in-chief, due to the poor performance of the 1, 5 and 8 Cavalry Division, had a false idea of ​​the disposition of the Russian troops in Podolia - which subsequently led to a sudden strike from the 8 army. Deploying the latest Austrians missed.

As you know, in 1912, the colonel of the Austrian General Staff A. Redl sold the plan for the strategic deployment of the Austro-Hungarian armies to the Russians for 50000. In accordance with the latter, the Austrians deployed directly at the pvcco-Austrian border. The Austrians, having learned about the leak, attributed the concentration area to the interior of the country, extending their northern flank to Krakow.

Relying on the data of the old deployment plan, as well as on the insufficient reconnaissance data of their cavalry, which confirmed the biased views of the front and main commands, the Russians deceived themselves. As a result, the 3-I and 8-I armies in the first days of the operation hit the empty space (which the main forces of the Austrians assumed), and the 4-I and 5 armies were hit by the enemy’s northern flank.

Thus, the first exam of the cavalry of both opponents (without exaggeration - the best in Europe) failed, failing to realize the basic task - to conduct operational intelligence. What are the reasons for the weak intelligence activities of cavalry?

The main reason is that neither the Russians nor the Austrians used the cavalry en masse.

Having 3 three-division equestrian corps and abandoning them for reconnaissance in the directions of: a) Tarnopol - Proskurov, b) Brody - Exactly, c) Tomashev - Kholm, the Austro-Hungarian General Command received not only reliable intelligence data, but could seriously compromise concentration Russian armies. If we take into account that the Austrians were afraid of the invasion of the Russian cavalry masses in Galicia, then all the more it should be recognized as erroneous to disperse the existing cavalry.

In turn, the Russians also did not mass their cavalry and did not abandon it to defeat the covering troops - which the Austrians were terribly afraid of. Meanwhile, at the beginning of August the Russians could invade 6 with equestrian corps consisting of more than 50000 sabers on: a) Radom, Kielce, Krakow; b) Lublin, Krasnik, Sandomir, Tarnov; c) The Hill, Tomashev, Yaroslav; d) Volodymyr-Volynsky, Sokal, Lviv; e) Tarnopol, Lviv; e) Kamenetz-Podolsk, Galich, Stry.

A particular advantage was gained by massaging cavalry on the right flank of the front. From the district of Radom, Krasnik equestrian mass, breaking into the valley of the river. San, she could crush parts of the Kummer group and the left flank of the Austrian 1 Army. Moreover, even the passive disposition of cavalry masses in the region of Kielce, Radom, Krasnik would have put the Austrians under threat of a flank attack from the Russian cavalry in the event of the Austrian 1-army eastward. With a similar way of using cavalry on the left (southern) flank of the front, the cavalry corps or 2 corps abandoned south of Lviv would meet the troops of the Austrian 2 army approaching from the Serbian front and force them to deploy significantly west.

The course of the Battle of Galicia would be completely different - with more serious and decisive strategic consequences.

Ctrl Enter
Noticed oshЫbku Highlight text and press. Ctrl + Enter
We are
The turning point in the Baltic sky: will we be able to fend off the hidden threat of the “watching” Rivet Joint?Research "Standard". Development of anti-aircraft systems of military air defense
Military Reviewin Yandex News
Military Reviewin Google News
92 comments
Information
Dear reader, to leave comments on the publication, you must sign in.