Terror and the fight against it. How it is done in Hamastan

March 26 2018
20
24 March 2017, a high-ranking activist of the Hamas organization Mazen Fukha (Fakha) was shot dead in a car park near his own apartment in one of the districts of Gaza. The identity of the victim, the method, and most importantly - the place of his liquidation make this event not only remarkable, but perhaps unprecedented. 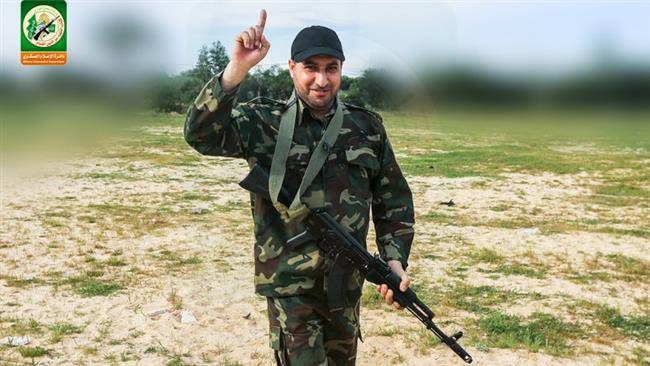 According to reports coming in from Gaza a year ago, 38-year-old Fukha brought the family home, and he went to park the car. In the parking lot and waited for him - the terrorist received four bullets. The absence of noise, as well as the fact that they missed him only after an hour and a half, allowed the liquidators to leave with impunity.

It is these facts that are first, but not least of all, perceived in Gaza as a sign that Israel is behind the incident. He lived killed near the sea, and therefore among the local population the most common version is that the killers came exactly from the water and left the sector in the same way.

In the 2003 year, this native of the Samaritan town of Tubas was sentenced to life terms by 9. It was his court that recognized the organizer of the terrorist attack, which resulted in the death of 9 near the town of Safed and about Israeli citizens were injured around 50: a suicide bomber exploded on the Egged company bus. 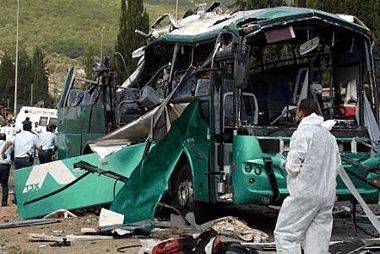 Fukha, one of the most wanted Hamas at the time, was arrested by the soldiers of the Duvdevan army anti-terrorist unit. Despite the fact that he had a Kalashnikov assault rifle at his disposal, he chose not to offer resistance.
Judging by the sentence, he would not have seen the century of freedom, but Shalit’s deal on the exchange of everything has been erased: Fukhu was released and deported to Gaza.
Mazen Fukha was one of the most prominent otpushchennikov, released from the exchange of Gilad Shalit in 2011 year. 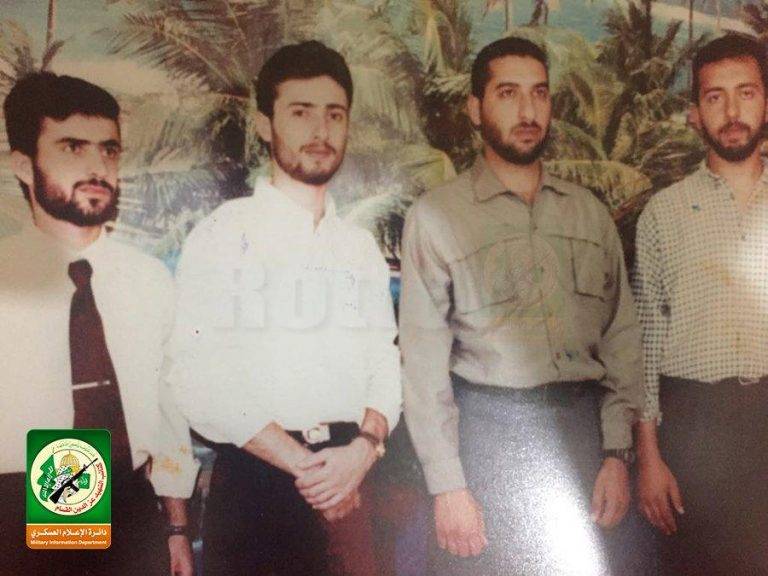 A group of terrorists released under the Shalit deal. Fukha second right.
Gilad Shalit is a soldier of the Israel Defense Forces who abducted 25 on June 2006 from Israeli territory by terrorist organizations: the Izz al-Din al-Qassam Brigade (military wing of Hamas), the National Resistance Committees (which include members of Fatah, the Palestinian Islamic Jihad and Hamas) and the Army of Islam, and held as a hostage by the Hamas movement. October 18 2011, after five years and four months in captivity, Gilad was released and transferred to compatriots in a deal in exchange for 1027 Palestinian prisoners, more than 400 of whom were convicted by an Israeli court on charges of terrorism and murder of Israelis near 600.
You should be aware that all those released from an Israeli prison under the “Shalit deal” in writing have pledged no longer to engage in terrorist activities. In contrast to the usual procedure of pardon, “within which prisoners leave prematurely as a result of their forgiveness,” Shimon Peres, then President of Israel, noted in the document on clemency that “he does not forget their crimes and does not forgive them”. 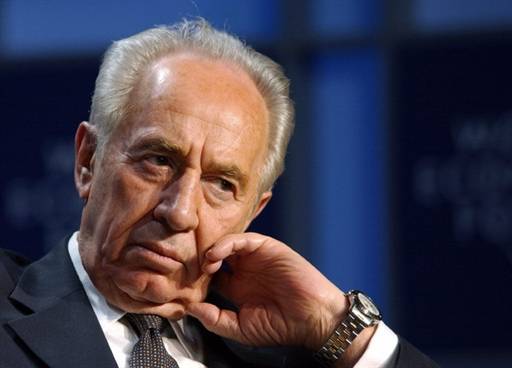 What did this terrorist do when he was in Gaza after being released from an Israeli prison? Like his fellow-comrade Yahya Sinuar, he did not retire. 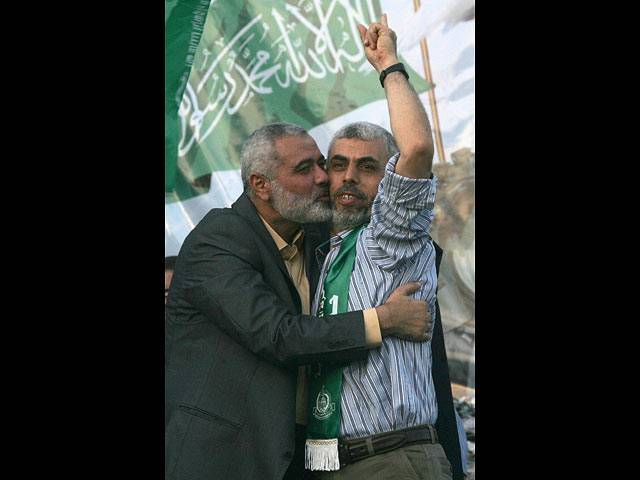 İsmail Haniya and Yahya Sanoir
And if Sinuar made a political career (in February, 2017 was elected leader of the Hamas movement in Gaza. Responsible for many terrorist attacks and executions of dozens of Gaza residents accused of collaborating with Israeli intelligence services. Sanoir was sentenced to 450 years of imprisonment, but spent in 22 prison .), then Fukhi’s specialization was much narrower: he became one of the main external curators of Hamas’s terrorist activities in Judea and Samaria.
Despite the fact that, thanks to the effective actions of the Shabak, the IDF and the police, as well as the assistance of the Palestinian Authority's special services, the military structures of Hamas in Judea and Samaria are under severe pressure, foreign and “Gaz” headquarters are constantly making efforts to reanimate the old ones and create new ones operational capabilities of the military wing of Hamas in these places. Confrontation, most of the vicissitudes of which remains unobtrusive to the media, does not stop for a minute. As for the headquarters in Gaza, its objectives include recruiting, instructing and funding both new and existing cells. Well, modern technology allows you to keep in touch much more efficiently than 10, and even more so 20 years ago. It was in this confrontation that Mazen Fukha, who settled in Gaza, played a huge role. 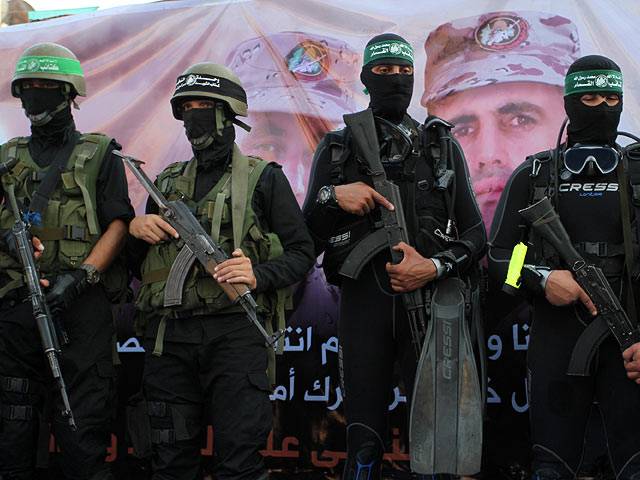 In this context, it is important to note that the “unwritten rules of the game” are in Israel’s relations with Hamas, which are a condition for the cease-fire established in 2014 following the results of Operation Unbreakable Rock. For example, within their framework, Israel does not carry out pinpoint liquidations in Gaza. Directly in the area of ​​the border fence, periodically clashes and various excesses occur, but this kind of incidents do not apply to point liquidations. Since the departure of the IDF from Gaza within the framework of the so-called demarcation, the vast majority of pinpoint liquidations (and even earlier) were carried out by air attacks. Additional options are strikes from the sea or from the territory of Israel. So, if the same Fukhi were eliminated with the help of a similar strike, this would undoubtedly become a pretext for escalation - like that in 2014. Since Israel is not interested in an escalation - essentially a new war - high-ranking Hamas activists felt almost completely safe. In fact, if you do not fear the Israeli aircraft, what could happen to them ?!

Yes, an engineer Mohammed ha-Zouari, who was making drones for Hamas and, as it turned out after his death, was a prominent member of the organization’s combat wing, was eliminated in Tunisia. 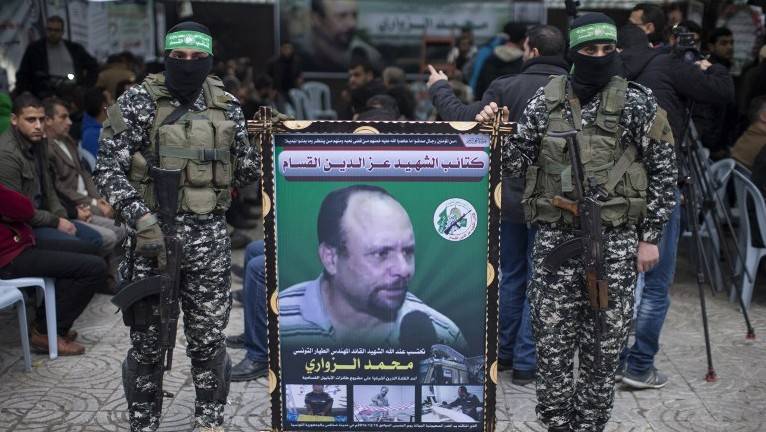 However, there is a huge "but": one thing - Tunisia with its many tourists, border checkpoints and weak intelligence services, and quite another - an isolated Gaza. To penetrate into the sector to a stranger, and even quietly dissolve into it, is not just difficult, but daunting. The entire line of contact with Israel - a kind of front line, almost always closed the border with Egypt - is also not a checkpoint between Belgium and France, and, of course, the sea ... And if it is not easy to get into Gaza from the outside, it’s even more difficult to leave it without being noticed as conceived fulfilled. It must be remembered that the Gaza Strip is by no means a field or a forest, but largely a gigantic building, where, among others, tens of thousands of Hamas security officials are based ...
And the most important thing: if the liquidators leave a mark, Hamas will have clear evidence against who did all this, hypothetically - against Israel. And if so, what's the point of this operation? After all, there is a huge risk for its performers plus an undesirable escalation. Given all these reservations, it is not surprising that Fukha and members of the leadership of the Islamist movement felt confident, because the current Gaza is far from Schem, not Hebron, not Tunisia and not even Beirut. But, as it turned out, such layouts were inappropriate. If (purely hypothetical) take the version that Israel stands behind the liquidation, then we can say that this is the first time since the withdrawal of the IDF from Gaza, when a high-ranking terrorist was eliminated in this way - in the spirit of the special services operations. No air strikes, special forces landings (at least, someone noticed) - nothing ...

Was the activity of the deceased a problem for Israel? Certainly, and very serious. Direct confirmation of this is an interview with the father of a murdered Hamas citizen living in the Samaritan Tubas, which he gave to both the Israeli and Arab media. Fukha Sr. said that Shabak officers came to him more than once and absolutely explicitly recommended to influence his son to stop his terrorist activities. Otherwise, the guests said in plain text, “Israel’s hands are long.” Moreover, judging by the publications, once the visitor even talked on the phone with Mazen Fukha himself ... The fact that all these visits did not have the desired effect is quite obvious, as well as the fact that if you judge at least them, Israel’s activity in Gaza Hamas terrorist was very disliked.

Hamas authorities in Gaza accused Israel of eliminating Mazen Fukhi after the murder was committed and threatened with revenge. Due to the complete absence of any evidence of a classic response in the form of rockets on Israeli settlements, no one followed. However, the threat of revenge at the “right time in the right place” sounds continuously and at all levels. Just two days later, the Gaza Interior Minister said that after the murder of Fukha, “more than 45 Israeli agents were arrested”. Very quickly, several people named “Mossad agents of Israeli foreign intelligence” were executed in the sector, but as you know, in fact, the Gaza Strip is overseen by the internal Israeli General Security Service (SHABAK).
Today, Fukha is the last pinpoint liquidated high-ranking member of the Islamic terrorist organization, the Islamic Resistance Movement HAMAS. The last and last was a close friend and “comrade-in-arms” of Fukhi, “the Chief of General Staff” of Hamas, the organizer of the abduction of Gilad Shalit, Ahmad Jabari, eliminated by an air-to-ground missile launched from the IDN helicopter 14 of November 2012. 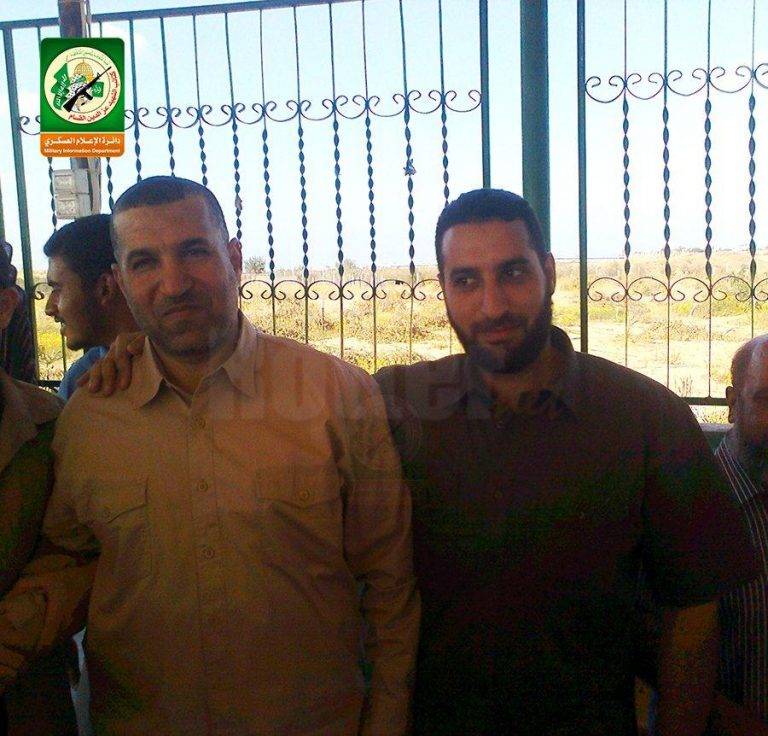 Mazen Fukha and “Chief of General Staff” of Hamas, Ahmad Jabari (photo after Shalit’s deal on October 18 of 2011 of the year)

Fukhi’s liquidation was a painful and, most importantly, serious psychological blow for the Hamas leadership. After the incident, many activists of this organization, even during a lull, are forced to significantly increase security measures. For some, this is a transition to a semi-legal position, and for someone, the need to guard, change their way of life and be on the alert all the time. For Israel, this is useful if only to ensure that Hamas and other groups will now be forced to allocate additional human and material resources to ensure their own security. So, those, as well as time, will remain less for other “useful” cases.

Sources:
Sharpe David. Newspaper "News of the week
Wikipedia articles, etc.
Recording from a camera that captured the elimination of the terrorists in Gaza 27 June 2014. From the plane of the Israeli Air Force a rocket was fired at a car traveling in the central part of the Gaza Strip. According to Palestinian sources, at that moment there were two people in the car: Osama al-Hasumi and Mohammad al-Pasiah. Both were field commanders of the terrorist group "Committees of the National Resistance".