March 26 2018
10
After joining the European Union and the transition to a single European currency, the economy of Latvia dropped sharply. Its only sector, which showed surprisingly positive dynamics, was the banking sector. In Riga, they talked about the appearance on its territory of a new world financial center - the Baltic. A sort of banking hub on the way of capital flow from the states of the former Soviet Union to the West. 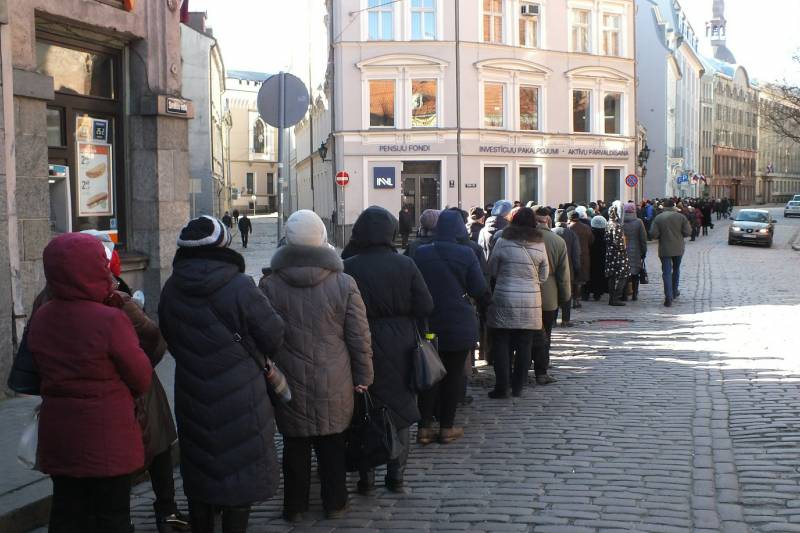 What capital went to the West through Riga

In fact, Latvian ambitions were supported by the work of 16 local banks and 10 branches of foreign banks. Almost ten thousand people worked there. For a small Latvia, the banking sector turned out to be a fairly large employer. Especially since 22,5 was still occupied by thousands of people in adjacent structures.

According to the estimates of the international auditing firm KPMG, the contribution of the Latvian banking sector to the gross domestic product reached 4,5 percent (three times more than the country’s agriculture provided, and twice the contribution of the IT industry.) It appeared that Riga managed to realize its financial ambitions center of the Baltic region.

Meanwhile, observant experts began to carefully note: ten out of sixteen local banks were fully focused on servicing non-resident money. Moreover, quite often the transaction through the Latvian banks took place during the day. For this, banks, of course, received their commission fees, but the republic had no benefit from such transit capital.

The second important point. More than 90% of non-residents' funds, as experts say, “just slept in bank accounts”. Clients could withdraw this money at any time, so that “dormant capital” could not be used for lending to the Latvian economy.

Finally, fictitious companies (also called dummies), suspected of cashing out or legalizing gray, even criminal capital, became the main interested party in transactions in Latvian banks. This should have been known at the European Central Bank, which controlled the banks of Latvia. But it seems that the ECB headquarters turned a blind eye to the obvious risks in order to support the weak Latvian economy. (Recall 4.5% of GDP from the banking sector!).

The first alarm bell rang last spring. In April 2017 of the year, Deutsche Bank stopped servicing the dollar transfers of all Latvian banks. The decision of the German bankers, experts explained that Deutsche Bank was under the strong pressure of the Americans.

The United States then announced a tougher fight against terrorism and money laundering. They started this struggle with their European competing partners. Since the beginning of the year, the US Federal Reserve has fined a German bank several times "for failure to comply with American laws in the area of ​​countering money laundering."
For example, in January 2017, Deutsche Bank was fined $ 425 million for the scheme of "mirror transactions" with Russian shares. According to the Americans, as a result of these operations in 2011 — 2015, about $ 10 billions were withdrawn from Russia.

Apparently, Latvian banks were involved in the scheme of these operations. At the very least, financial analysts by that time had already openly written about disproportionately large dollar transactions going through Riga. Not only Russian business, but also companies from many CIS countries had a hand in these payments.

In an interview with rus.db.lv, investment banker Geert Rungainis explained the reason for stopping dollar payments through Frankfurt: “The decision of Deutsche Bank is a consequence of all these processes (money laundering from the CIS - Ed.). Aggravated the situation история with Moldova, when it turned out that a large amount of stolen money had passed through Latvian banks. In fact, it was about the robbery of the banking system, which was a success, thanks in part to the Latvian banks. ”

With these sad examples, the dubiousness of Latvian banks, as the Baltic Financial Center, has clearly revealed itself.

Last year's history Riga managed to slowly lower on the brakes. However, claims against Latvian banks remained. This February, the Americans reminded of this in the most dramatic way. The US Treasury Department banned all financial institutions in the United States from opening and maintaining correspondent accounts with the second largest Latvian bank - ABLV Bank.

The bank actually denied access to the US financial system. This happened after a joint investigation by the American Ministry of Finance and its financial police FinCEN. As US Deputy Secretary of Treasury Sigal Mandelker said, “FinCEN discovered that ABLV bank institutionalized money laundering, turning it into the core of its banking business. The illegal financial activities of the bank included transactions for companies and individuals designated by the UN as responsible for participating in the procurement or export of North Korean ballistic missiles. ”

In other words, the reason for American repression was the "Korean trace" in the payment transactions of the Latvian ABLV bank. In addition, the disgraced bank was accused of “using billions of dollars for corruption purposes”. In addition to Russia, ABLV was convicted of illegal activities related to the business of Azerbaijan and Ukraine, as well as “transactions for corrupt politically exposed persons.”

It all happened on February 13. Five days later, in Riga on suspicion of extortion and receiving a bribe in the amount of € 100 thousand, the head of the Bank of Latvia Ilmar Rimshevich was arrested. Rimshevich was soon released on bail. The arrest initiator, the Latvian Bureau for the Prevention and Fight against Corruption, did not specify how the case of the head of the Central Bank is connected with the machinations revealed by the Americans in ABLV.

There were flashes in the press about extortion of a bribe from shareholders of Norvik Banka by “some official in the financial sector of the country”, but they were overshadowed by another news. February 26 at an extraordinary shareholders meeting (87% of the bank’s share capital belongs to three individuals), it was decided to self-destruct ABLV Bank.

The meeting, as they say, made a good face on a bad game. It did not agree with the charges of FinCEN and instructed the bank’s liquidators to refute them. This passage from the decision of the shareholders of ABLV did not mislead anyone. It became clear to all: over all Latvian banks, carried away by dubious financial operations, clouds thickened.

Those who did not understand this were explained by the special mission of the American Ministry of Finance, which arrived in Riga in early March. Latvians listened to overseas guests, hesitated, but made a difficult decision for themselves. On him last Tuesday in the transfer of LNT "900 seconds" said the head of the Finance and Capital Market Commission Peters Putnins: "Latvian banks must stop working with dummy companies of unclear origin, which are often used in money laundering schemes for half a year."

In the assessment of Putnins, this is roughly 35% of deposits in the Latvian banking sector, plus what is accounted for by fictitious company transactions. After such an execution, “3-4 operating banks will remain in Latvia”, this is the forecast of the banker Geert Rungainis already mentioned here.

It seems that the Latvian “bank shop”, referred to in Riga as the Baltic World Financial Center, is turning into an ordinary provincial banking sector, located on the sidelines of the continent and the movement of capital. The miracle did not happen. Latvia’s financial ambitions were not supported by the strength of its economy and the authority of the state. In excess now there are only reputational losses with which Latvia will continue to live.

Ctrl Enter
Noticed oshЫbku Highlight text and press. Ctrl + Enter
We are
Results of the week. "Well, do not change me because of every idiot!"Yuri Drozdov: Russia prepared the role of the sacrificial calf
Military Reviewin Yandex News
Military Reviewin Google News
10 comments
Information
Dear reader, to leave comments on the publication, you must sign in.