Zrada or peremoga? What is now fed the Ukrainian army

March 27 2018
38
Habitual discussion of the Ukrainian army: either bad or nothing. There are, of course, enough reasons, but such an approach frankly reminds complacency in the fact that to the west of the Russian borders there is a completely disorganized and demoralized army that can be filled with hats, and generally “defeated by one hand”. 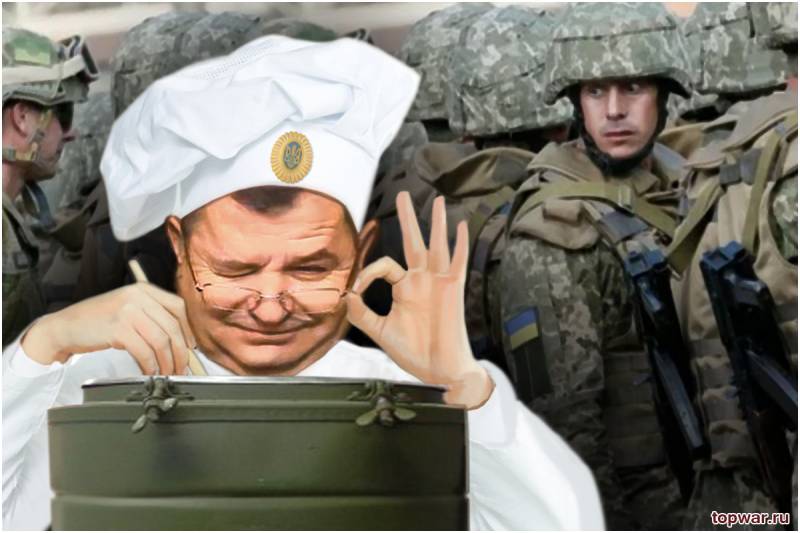 Both disorganization and demoralization against the background of the ongoing civil war are, of course, present in the Armed Forces of Ukraine, but it is clearly unacceptable to underestimate those who are frankly trained as a force directed against Russian interests, against Russian sovereignty, not to mention the Russian mentality (in including in Ukraine itself).

Annual spending on the military sphere about 6% of Ukraine’s GDP (Poroshenko personally sounded such data) with all cuts and kickbacks by definition could not help but play its role. Could not not play - it means played. You can, of course, try to brush aside this fact. You can continue to engage in a strange shuffling about the fact that all this is "not a problem." You can be ironic about and for no reason.

But, by and large, the Western sponsors, making considerable investments in the Ukrainian (read - anti-Russian) military, and without Ukraine’s acceptance into NATO, were able to achieve a lot for themselves. Not only finances from the West have done their work. They have done their job: Western military instructors, taking control of the most important segments of Ukrainian military logistics, and, of course, the total impoverishment of the country's population in exchange, including the increase in military spending. Loss of Ukraine's sovereignty? The thing is obvious. But for those who are at the helm of this country, is it really important? Not for this they were brought to power in the 2014 year, in order to endow Ukraine with real sovereignty. The main goal is separation from Russia. And this goal is systematically achieved. Although the ratings of the Maidan government are slipping to the level of statistical error, but for the organizers of this whole action, the goal justifies the means.

So, what is changing in the Ukrainian army? One of the areas that, by definition, can not be ignored - the power system. Of course, you can continue to discuss eating “freshly prepared” snakes by “atoshniki”, having fun about mouse tails in bread for Ukrainian recruits, and the lack of spoons “for everyone”. But if objectively: in the yard 2018 year. And since the year 2016, the Ministry of Defense of Ukraine, on the urgent recommendation of advisers from NATO, has undertaken to reform the food supply of the Ukrainian Armed Forces. The NATO partners explained to the Maidan authorities that it would be extremely difficult to hold on to their seats without the support of the armed forces, and therefore it is necessary to invest in the armed forces — to steal, but to invest ... They do so, relying on the fact that the army shuhera "will substitute a shoulder of the help to this mode. Substitute or not substitute - a separate question, for another material. In the meantime, the facts.

Until 2016, the list of standards for an individual soldier of a certain type of service was in effect in the food supply system of the Supreme Court of Ukraine. The rules prescribed about 40 positions, which could be used for cooking for the Ukrainian military. One of the examples cited by Diana Petrenya, the head of the power system reform project in the Ukrainian Armed Forces: the bread soldier of the armed forces of Ukraine were assigned to 650 g of bread and 70 g of bread every day, and the soldier should have received these bakery products (of whatever quality, but received).

Diana Petrenia:
But this is insanity, no one eats so much bread. We offered to completely abandon the rules and developed an alternative - Product Catalog. Today it includes about 400 product names.

The matter is actually about 348 product positions, in which the command in one or another military unit of the Armed Forces of Ukraine is free to make changes in the framework of the released funding. In other words, instead of "extra" 300-400 gr. bread and 300 g pearl barley is proposed to diversify the menu with other positions. With an increasing overall level of funding for the Ukrainian Armed Forces, this becomes (de jure) possible. Naturally, not everywhere; Naturally, through the format of "but you can and less."

For obvious reasons, the expansion of the product mix dictates the need for more professional competencies on the part of cooks. The Ministry of Defense of Ukraine agreed to solve this problem with the help of the outsourcing system known in Russia, which is actively attracting civilian personnel. At the same time, civilian cooks in Ukraine receive the status of military personnel and pass into the subordination of the chief product. The problem for the Ukrainian Armed Forces is that today their staffing level does not exceed 50%, and therefore, with responsibility, to put it mildly, not everything goes smoothly.

The new power supply system, in fact, on the “buffet” system appeared in the 22-s of the 23-s “experimental” parts. First of all, we are talking about training centers. It is clear that these are exhibition parts, where not only internal ministerial checks, but also journalists often visit them, and therefore “mouse tails” will not be by definition, and by definition, it will be a weighty percentage of showing off. But where is it not? Therefore, it is worth paying attention to the intermediate results of the reform of the power supply system in the APU. As an example, the 184 training center of the National Academy of Land Forces in the Lviv region, which made Mr. Poltorak an exhibition with an eye on the “NATO level” with chicken shashlik, Greek and “crab” salad, an abundance of vegetables and other things unheard of for the average Ukrainian soldier menu items.


What specific positions are now included in the reformed power system in the APU (in the same directory)? This is reported by the head of the department of food supply of the Armed Forces of Ukraine (Logistics of the Armed Forces of Ukraine) Colonel Nikolai Kuklyuk
Vegetables - 67, cereals - 28, spices and sauces - 27, meat and meat products - 65, honey, jam, chocolate - 20, drinks - 32, fruits, berries, nuts - 30, etc.

According to Kuklyuk, such a catalog “brings the power supply system in the Armed Forces of Ukraine closer to NATO standards.”

In 2019, the Ministry of Defense of Ukraine plans to complete the reform of the power supply system and introduce the use of the above-mentioned catalog in all military units of the country.

And against the background of the fact that the Ukrainian authorities are trying to show how far the support system has stepped on the funds invested in the army, representatives of the same support department talk about big problems in the widespread implementation of the system.

The mentioned above project leader of the reform of the power supply system in the Armed Forces of Ukraine Diana Petrenya notes that outsourcing is outsourced, but the reform is “hampered” by the monopolization of the Ukrainian market. Affiliated with those responsible for the organization of catering to the military companies, they actually divided the market, which allows them to dictate prices at a level that clearly does not correspond to the “store” (market) market.

Petrenia:
Each of these monopolistic companies has a number of affiliates, which, in fact, allows them to win tenders for ProZorro (bidding system). They come to 16-th companies and start bargaining, and if some other, third-party company comes, they complain to the Anti-Monopoly Committee. They do not hide, it is not even a secret. Everyone knows very well, for example, that Geos Group is Voentorg, and vice versa. The same people come to bidding, to negotiate. But the real owners, I can only guess. I know the official directors of these companies, but the final beneficiaries are unknown to me. In these companies there are a lot of former colonel of security and deputy commander for the rear, because they know the system from the inside and understand what military food is. Monopolistic companies know that they win half of the courts because it is difficult to make this assessment. And sometimes it is easier for these large supplier companies to pay penalties and do everything the same way.

So, the fact is that, in fact, huge amounts of money in Ukraine are allocated for food security. At the same time, this fact stratifies the Ukrainian army. Why? Because there are exhibition parts, where sparkling kitchens, attractive chefs and full (by army standards) abundance on the menu and on the table. And there are others. Where there was no decent security system, there is no.
Well, here ... It would seem, in the end, about the Ukrainian army is still bad.

In fact, with the funding that is provided to the Armed Forces of Ukraine, they could well be reformed “from one to the other,” including a high percentage of rearmament, not to mention the food security system. But the Ukrainian army, with all the NATO desire to make it "European", is an unkillable nuance - corruption. And this is the very “aggressor” that the APU doesn’t “overthrow”.

While some take a variety of food in the spacious dining room, others knead the dirt and burn from insecurity and their own razvstveydstva at the sites. While some have a buffet, others have an overdue NATO suhpay from volunteers, resold to the neighboring pidrozdil to buy several packs of cigarettes.

The lion's share of these 6% of GDP allocated Poroshenko, Poroshenko's “falconists” and goes into the pockets.

And if we consider the current Ukrainian army as one of the potential adversaries, then we can openly say: “Glory to Ukrainian corruption!” If it were not for it, we could have much more problems. But we must not forget that Ukraine’s overseas partners always have a printing press for this case - the holes at the right time for themselves can be plugged if the situation starts to spin out of control. In general, hats and moods are superfluous anyway.

Ctrl Enter
Noticed oshЫbku Highlight text and press. Ctrl + Enter
We are
Weekly summary (30 January-5 February) on the military and social situation in the DPR from the military officer "Mag"Situational analysis of the death of the MH17 flight (Malaysian Boeing 777), made on the basis of engineering analysis from 15.08.2014
Military Reviewin Yandex News
Military Reviewin Google News
38 comments
Information
Dear reader, to leave comments on the publication, you must sign in.