Russians are always to blame

March 26 2018
29
What catches the eye in the poisoning of the ex-employee of GRU Skripal and his daughter, allegedly on the Novice 4 OB in March in Salisbury? The English Prime Minister Teresa May and Boris Johnson immediately assigned Russia guilty to the incident, without even waiting for any results of the investigation befitting the incident. And they began to transfer the arrows to Russian President Vladimir Putin, and Foreign Minister Boris Johnson assumed the role of investigator, suddenly seeing that the decision on the assassination was most likely made by the Russian president. It is Boris who is, in essence, the head of the investigation into the “Skripal case”, because the investigation itself does not say anything substantively. What does this mean? 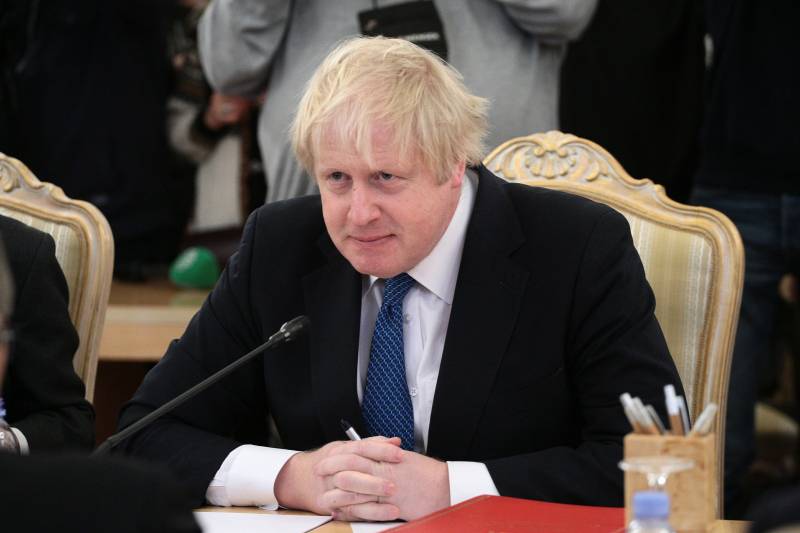 Boris was in a hurry to unleash the "Case of the Violin" for the presidential election in Russia on March 18. Is it really in such a hurry to help Putin with voter turnout? Perhaps this is a consequence of the "unpredictability of Russia" for Boris. His task was to delegitimize the presidential elections in Russia, and England’s subsequent efforts to "not congratulate" the victory in the election of Vladimir Putin show this.

Incidentally, in this case, England was immediately supported by Senator John McCain, from a hospital bed, one might say, a bed, which fell upon President Trump for congratulating Putin on his victory in the elections. This speaks in favor of the fact that the poisoning in Salisbury was a special operation of the financial and oligarchic world elite, England is only its performer, Boris Johnson is a loudspeaker.

What follows from this? Russia cannot trust the English investigation, because it appointed the culprit before it began. Russia may not recognize the results of the English investigation, since England has violated the OPCW Convention, which obliged the country in which the incident occurred, to provide the alleged participating country of the incident with a sample of the toxic substance during 10 days. England has placed itself outside the Convention, therefore it can be considered by Russia, with a high degree of probability, involved in the poisoning in Salisbury.

The unproven English accusations of Russia became an occasion for some Western leaders not to congratulate Vladimir Putin on his election victory. Including for the head of the European Council Donald Tusk. Although the opposition leader in England, Jeremy Corbin even urges England not to run ahead of evidence. European Commission President Jean-Claude Juncker sent a congratulatory telegram to Putin. US President Donald Trump congratulated Putin, and did not mention the “Skripl case” at all, for which he was particularly harassed in the world fake media.

Why did Trump congratulate Putin on his election victory? Former CIA head John Brennan hurried to put a shadow on the fence: "Putin has something to Trump." There is a simpler explanation: this is the result of a recent visit by the heads of Russian special services to Washington. Maybe they warned Trump and CIA Director Mike Pompeo about the provocation in England? Is that why Trump is distancing himself today from the “fake distraught media”?

The visit of the heads of our intelligence services to Washington is an extraordinary event, and we see the extraordinary behavior of Trump, who fired Secretary of State Rex Tillerson, who succumbed to British provocation, and then congratulated Putin, and did not mention English provocation. Mike Pompeo receives a new appointment to the vacant position of state secretary.

If the British intelligence agent Christopher Steele falsified the file on Trump, why doesn’t England falsify the Skripl case against Russia? The Russian special services could learn something about this English provocation at the preparation stage, and reported it to Trump and Pompeo.

Despite the English “high probability share of Russia's guilt”, and the solidarity shown by the European Union with England, there is a split in the collective West in the “Skripal case”. This split in itself reinforces the hysteria of the globalist financial elite of the West, but what lies at its foundation?

Vladimir Putin says his famous speech on the latest Russian strategic weapons 1 March, three days before the poisoning of Skripal and his daughter. March 4 globalists hands of the British intelligence services responded to Putin's speech. They also answered politically, and it turned out that not everyone in the West agrees with such a policy. In Salisbury, there was a deliberate attack on Russian citizens, since Skripal had dual citizenship, it was "directed" for the Russian elections, - Vladimir Ermakov, a representative of the Foreign Ministry, gave a Russian political assessment of the incident in Salisbury.

Boris Johnson, meanwhile, is already acting as a visionary: “Putin will use the 2018 World Cup as Hitler used to use the Olympics — 1936”. Johnson is crazy, delirious? What is it all about? This is the logic of war. In a war against the enemy, any lie is allowed, any accusations are allowed. And this is another indirect confirmation of the poisoning of Skripal and his daughter by Western intelligence agencies. In general, England has a very bad reputation: in this country, Russian citizens are constantly dying, and they have connections with the British special services. They give consultations to their secret services, read lectures, and then die in a strange way. Skripal is not the first and, apparently, not the last in their row.

The last argument of the globalists in an attempt to delegitimize the Russian elections: “Russia is not a democracy, Russia is a dictatorship and autocracy!” The world’s “democratic” media shout. If the criticism of the elections comes from such heights of "democracy", then what is Western democracy worth?

It is time to say that in the West there is no democracy, in general, as many of it are supposedly represented by the "power of the people." And there is the corrupt power of the oligarchic financial elite, which buys a democratic facade and demagogues like Boris Johnson at a reasonable price in the satellite countries and changes these demagogues like gloves as needed. Boris understands this and slams the door louder to at least get stuck in history.

The financial and oligarchic elite of the West now supports the nationalists in Ukraine, Poland, in the Baltic States, and incites them against Russia, as in its time it also supported and incited the ultra-nationalist Hitler against Soviet Russia.

Ctrl Enter
Noticed oshЫbku Highlight text and press. Ctrl + Enter
We are
Toxic substances "Novice": do not exist, but used?Bitter thoughts of the West. Will Russians poison Donald Trump and Theresa May?
Military Reviewin Yandex News
Military Reviewin Google News
29 comments
Information
Dear reader, to leave comments on the publication, you must sign in.