The most long-range rifle of the Wild West

March 28 2018
22
It just so happened that in the US, small weapon developed many. The same Browning made an improvised gun while still a boy, and then what about adults? And someone was expecting success, but someone was not. But nevertheless, people tried to create something of their own, to improve the work of their predecessors. So Christian Sharp patented his first rifle back in 1849, and its design was so perfect that it began to be produced almost immediately. First of all, I must say that it was a rifle with a bolt vertically sliding in the grooves of the receiver, controlled by a lever below or a “Spencer bracket”.

The cartridge to it was first paper, and ignition was carried out using the capsule. But Sharpe designed it all so well that its rate of fire has increased significantly, and the usability has increased. The upper part of the bolt had a wedge-shaped form and, after the cartridge was inserted into the barrel, and the bolt itself went up, it cut off its bottom, opening the access of hot gases from the capsule to the powder charge. The cap itself was put on the brand-tube on the gate manually. From it to the trunk was the L-shaped channel, through which gases flowed exactly into the central part of the trunk. However, there were also known attempts to automate and speed up this process - and, in particular, a container for a capsule tape was installed on the receiver box, which was fed out automatically and superimposed on the brand-tube opening when cocking the hammer. Such was, for example, his 1848 carbine of the year, which weighed 3,5 kg, and had a caliber 13,2 mm.

In 1882, the company created by Sharpe ceased operations, but the rifles and carbines of his system remained for a long time in the hands of people and were actively used by them. During the entire production of weapons, Sharpe managed to sell 80512 carbines and a 9141 rifle.

As soon as unitary cartridges appeared, Sharpe’s carbines and rifles were converted to them. Now, when lowering, the shutter opened the charging chamber, where the unitary metal cartridge was inserted, while the trigger beat on its rim, in which was the initiating composition.

Sharp rifle with a faceted barrel.

By 1861, it was Sharpe’s rifle that turned out to be the most rapid-fire weapon of the cavalry and infantry of the unionists, that is, the Northerners, and was actively used on the battlefields of the American Civil War. In particular, the so-called "Arrows of the United States" and snipers were armed with a rifle. Carabiner is popular with pioneers and migrants in the era of the conquest of the "Wild West". In contrast to the usual infantry regiments of the North, soldiers from this brigade were recruited not from one state, but from all over the country, and they were the only army division of the northerners wearing a dark green uniform. The main selection criterion was the ability to shoot straight. The strict rule by which volunteers were selected was: “no one who can hit the target from 200 yards of 10 with successive shots so that none of these hits are removed from the bullseye by more than 5 inches will not be accepted into the ranks of the brigade. " The Sharps also armed other choice shooters of the civil war - snipers.

Their weapons were usually supplied with telescopic sights, which were the same length as the barrel on which they were attached. Snipers were aimed fire, having as its main goal officers and generals of the enemy. They acted on both sides and at the same time they sometimes managed to shoot a very “big game”. For example, in the Battle of Gettysburg, a southerner sniper hit the commander of the 1 Corps of the Potomac Army, General Reynolds. True, Southerners snipers used another weapon, namely Enfield English rifles with Joseph Whitworth's drill. However, ordinary soldiers on both sides considered snipers to be professional assassins and, again, in both armies hated them with fierce hatred. One soldier-northerner wrote, for example, that only one type of a killed sniper — no matter if he was a Confederate or a federal soldier, and it was easy to recognize them through a sniper-sight on a rifle — always provoked great joy in him.

Samples of popular small arms in the US after the civil war - from top to bottom: Sharp rifle, Remington carabiner, Springfield carabiner.

Moreover, Sharpe's rifles were distinguished by long range. It is known that in 1874, it was from Sharpe’s rifle that someone Bill Dixon hit the Indian warrior from a distance of 1538 yards (around 1406 m), which for that time was a real record of firing range. 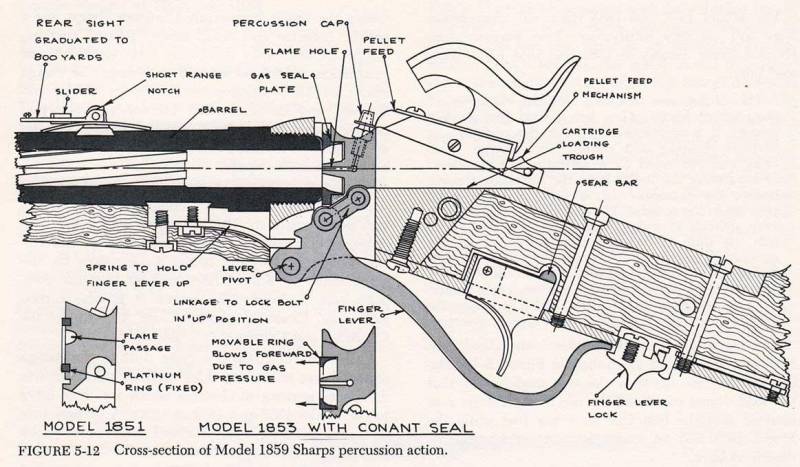 Sharp's rifle device, model 1859 g. The sharp edge of the bolt cut off the back of the cartridge, but protection from gas breakthrough provided a rotating platinum ring of a special form, which was bursting with gases when fired, so that the breakthrough to the outside was excluded.

However, despite the success, at the beginning of the 1860-ies Sharpe closed his company and, joining the partnership with William Hankins, began to produce with him small-caliber four-barreled pistols, and, again, in demand, breech-loading rifles and carbines. True, in 1866, the partnership broke them up, and then Sharpe re-founded his own enterprise and continued to manufacture weapons. Interestingly, after his death, the company created by him began the production of powerful rifles, which were named after him. They included the famous .50 caliber rifle, known as the Big Fifty. 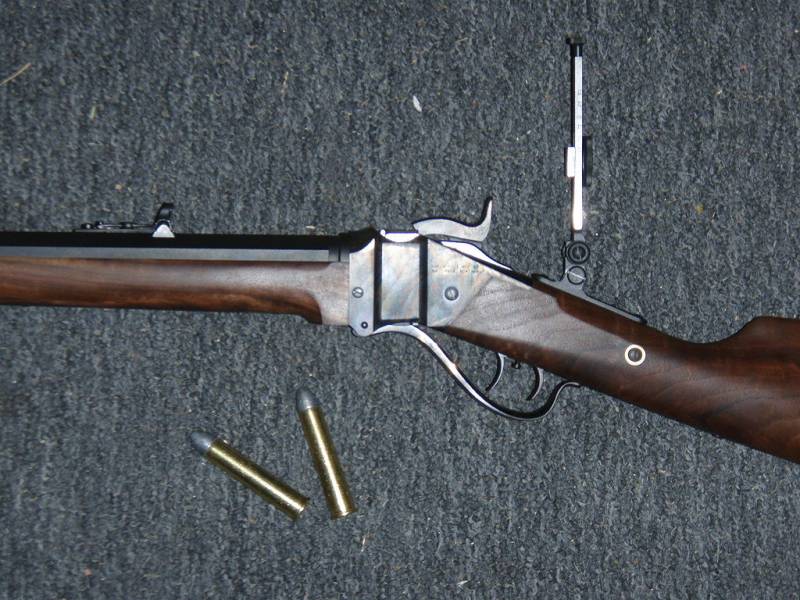 It was called so because of the .50 caliber. The bullet in the cartridge of this caliber had a diameter of 13-mm, so you can imagine its destructive power. The photo shows a Big Fifty rifle and its ammunition next to it. 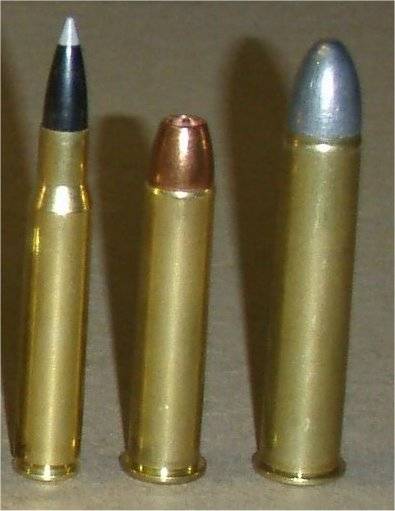 The accuracy of shooting and the large stopping effect of Sharpe’s large-caliber rifle bullets turned into a legend, and a fatal shot of them could have been made at a distance of 900 meters. Interestingly, their production continued in the twentieth century, and since 1970-s many copies of Sharpe’s rifles were made in ... Italy.

Modern copy of "Sharp" with diopter sight and faceted barrel.

Thus, for example, the Sharp-Borchardt model 1878, a rifle developed by Hugo Borhardt and made by the Sharps Rifle Manufacturing Company, appeared. It was very similar to Sharpe’s older rifles, but at the heart of its design was Hugo Borchardt’s 1877 patent. It was the last of Sharp and Borchardt single shot rifles, but it did not sell very well. According to the company, 1877 22 rifles have been launched since 500, and the company was closed in 1881. The reason was that it was calculated under the cartridges with black smoke powder. 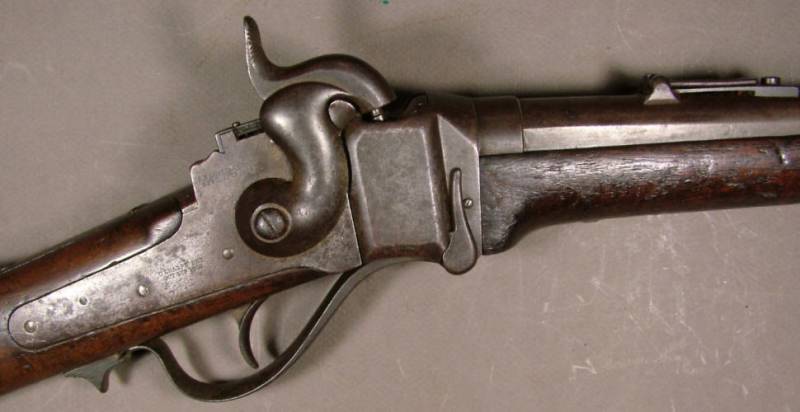 View of the bolt carrier on the right.

View of the bolt carrier on the left.

Several options were released: "Carabiner", "Military", "Short range", "Medium range", "Long range", "Hunter", "Business", "Sporting" and "Express". The Sharp-Borchard military rifle was manufactured with 32-inch round barrels purchased by militias of the states of Michigan, North Carolina and Massachusetts. Other models were made of different calibers, with faceted trunks, had an engraving, etc. The option for hunters was, of course, the most affordable. 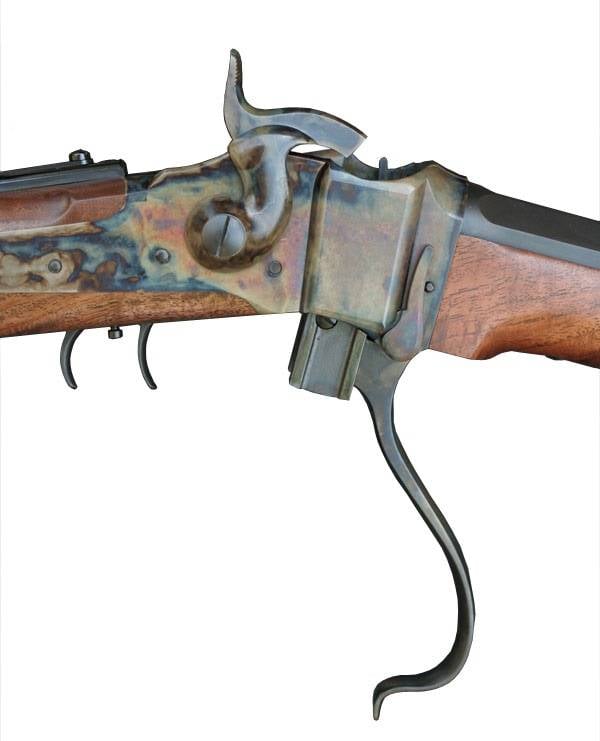 Sharp Shutter The second trigger with the shneller and the bolt of the schneller setting located between the hooks are clearly visible. 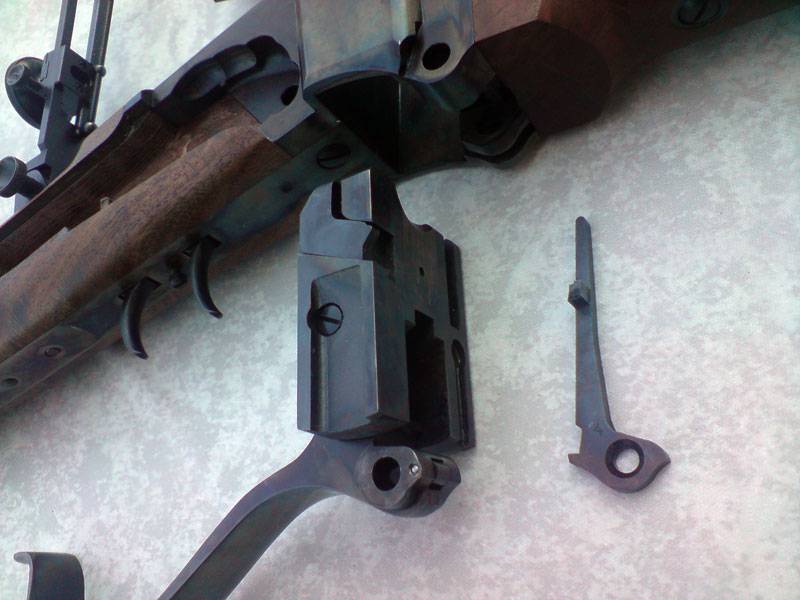 The shutter removed from the frame.

Despite the lack of commercial success, this rifle impresses with its strength and accuracy: it is considered one of the strongest, if not the most powerful weapons ever made before the beginning of the 20 of the 20th century. The gun was revolutionary in its time, because it began to use twisted springs, rather than flat. Reached today, these rifles are highly valued by collectors, especially unmodified specimens designed for large heavy cartridges of .45 and .50 caliber. 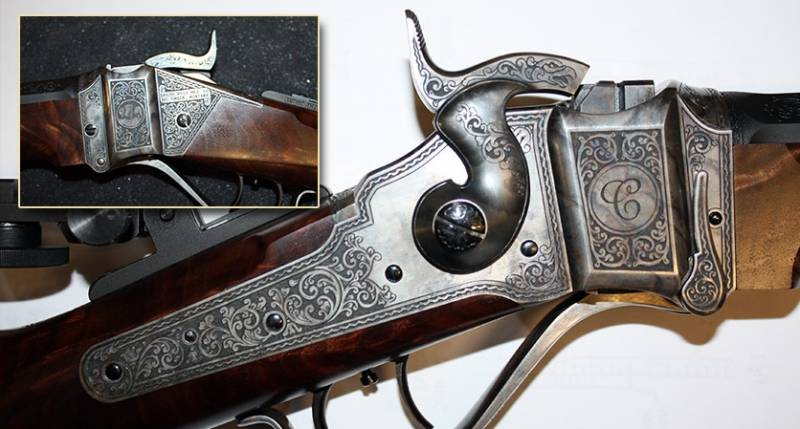 Today you can buy not only an exact copy of Sharpe's rifle, but also buy it with personally engraved metal parts for you ...