March 24 2018
50
On Saturday, a ceremony was held in Primorye Territory to award the name of Hero of Russia, Major Roman Filipov to the Su-25 Su-Assault Aviation Regiment of the Eastern Military District (VVO), the district press service reports. 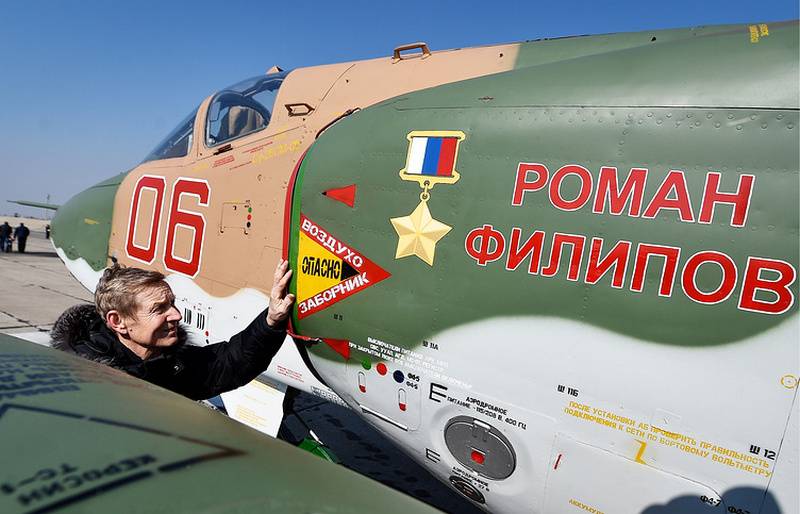 Today, at the airfield of the assault aviation regiment of the Air Force and Air Defense Army of the Eastern Military District, stationed in the Primorsky Territory, the ceremony of conferring the name of Hero of Russia Major Roman Filipov to the Su-25CM aircraft took place. In this part, the pilot served for 10 years and from there he was sent to solve special tasks in the SAR
- said the head of the information support department of the BBO press service for the Pacific the fleet captain of the second rank Nikolay Voskresensky.

A solemn formation of the regiment's personnel and a rally took place at the airport, in which the parents and widow of Filipov took part.

The father of the deceased pilot, Nikolai Filipov, thanked the aviators for the memory of his son and expressed the hope that the pilots who will fly on a personal attack aircraft will receive special motivation for exemplary performance of tasks.

Recall, Major Guard Roman Filipov was killed on February 3 while patrolling over the province of Idlib. His Su-25 attack aircraft was shot down from a portable anti-aircraft missile system. The pilot managed to eject and led the battle until the last minutes. In order not to be captured, a Russian officer blew himself up with a grenade. The pilot was posthumously awarded the title of Hero of Russia.