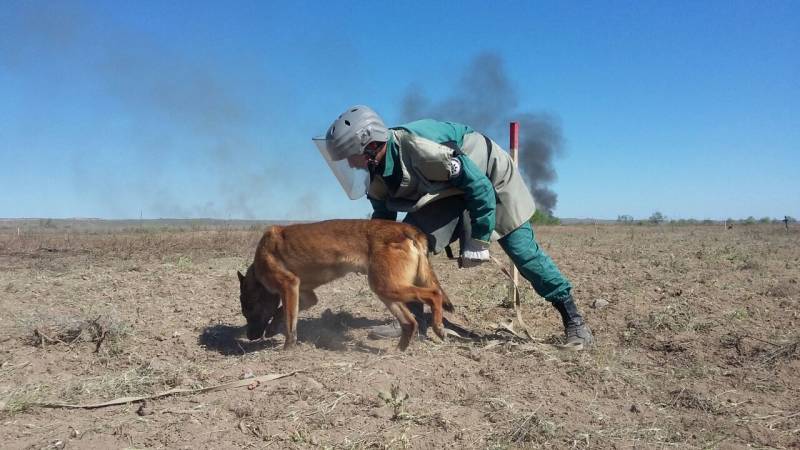 A mine search service dog from the Marshall Legacy Institute, along with its counselor, helps clean the land of Azerbaijan from mines


More than 700 min types are known. They are made of various materials: wood, metal, plastic, bakelite and even glass. They are light and heavy, large and small, flat and thick, round, angular, asymmetrical, and, moreover, in different colors. The only thing that unites them is the charge of the explosive inside, which makes its detection one of the most important stages of demining.

It has no equal in the performance of such tasks dog nose, also sometimes called a "biosensor." In addition to the detection of mines, dogs are widely used in equally important tasks in determining non-mined zones.

Since 1992, the world's largest non-governmental organization NPA (Norwegian People's Aid - Help of the Norwegian People) has been carrying out the program “Detection of explosives by dogs”, in which it breeds, trains and uses dogs to clean various areas of the world from weapons that can be killed or crippled people, including children. 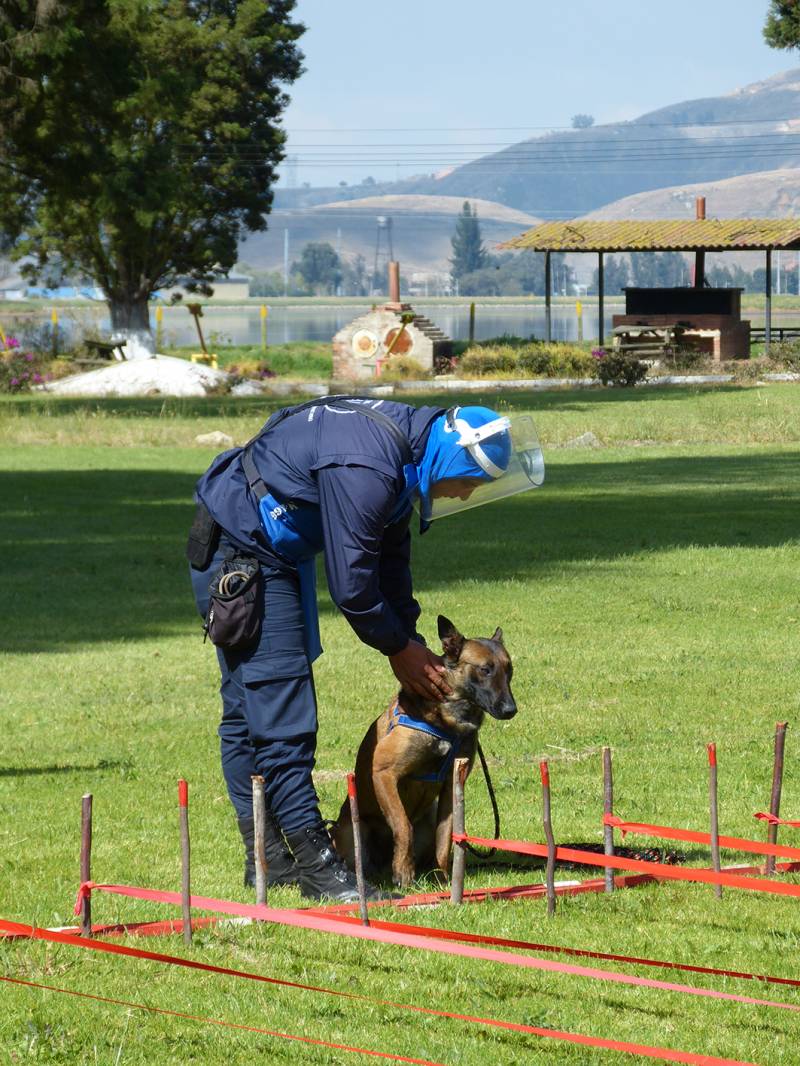 This job is difficult and very dangerous. Dog handlers and counselors entrust their lives to the paws of these animals, or rather to their noses, and over the years 25 no dog from the NPA has been injured. More 500 sapper dogs (called 9 abroad) work around the world, in Africa, South America, Southeast Asia and the Middle East. All existing attempts to replace these “live” sensors with electronic technologies have had limited success. The problem is that the degree of development of smell in dogs is ten times higher than the degree of smell in humans. If there is about 6 millions of olfactory cells in a person’s nose, then a dog has about 225 millions. Such qualities are best suited for the detection of explosives.

The American Marshall Legacy Institute (MLI) launched the Mine Detection Dog Partnership Program (MDDPP) in 1999, which accepts public and private donations for the purchase, training and supply of mine detection dogs (Mine Detection Dog) demining organizations in countries affected by this problem. Currently, more 900 sapper dogs operate in 24 countries, and the MLI Institute has donated more 200 such dogs. Since the start of the MDDPP program, MLI dogs have investigated more than 45 million square meters of minefields.

MLI dogs are trained either at the General Training Academy in the State of Texas or at the SMRS Training Center in Bosnia and Herzegovina. Both organizations buy a dog from famous breeders in Europe. Dogs undergo an intensive 3-5 months training course in which they learn to identify the smells of explosives, mainly contained in mines.

Dogs are trained to identify the desired smell and then sit next to each other, signaling the counselor to mark this place. Thus, the complete destruction of explosive items in a given area is guaranteed. The sense of smell and acquired detection skills, as well as agility and size, make the dog one of the most versatile and valuable partners in demining units. 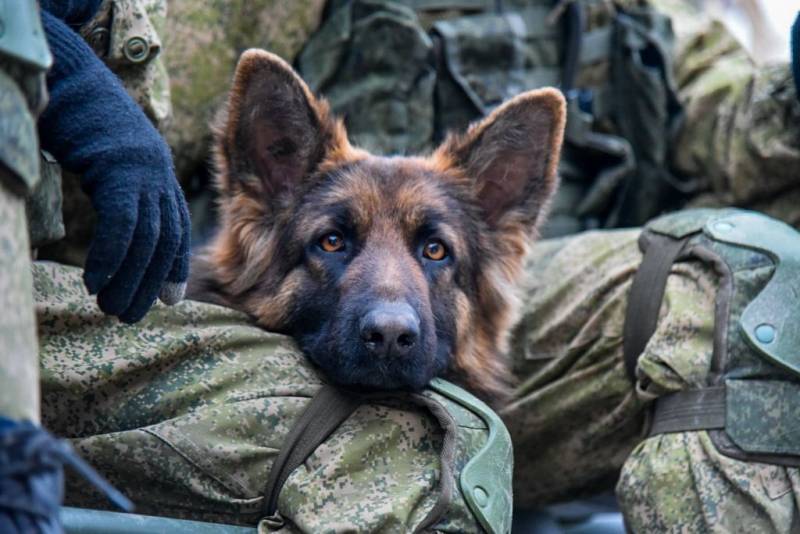 SMRS are motivated to work because they have close relationships with their counselors, from whom mines receive an award for finding mines. When a dog finds a mine, the leader praises it and gives a reward, usually a ball or a toy. It amuses dogs and motivates to continue the search.

Six MLI-trained dogs were recently transferred to the HALO Trust, the largest humanitarian demining organization in support of the Landmine Free Artsakh initiative of Armenia, which was launched in 2002 to clear the territory of Nagorno-Karabakh from all mines.

After many years of negotiation, a breakthrough demining agreement was reached between the Government of Colombia and the largest rebel group FARC (Revolutionary Armed Forces of Colombia). In 2016, Colombian President Juan Santos promised that 21 is a million square. meters of Colombian land must be cleared of mines for five years. This complex mission was led by the Colombian army, which in August 2016 of the year formed a brigade for the removal and destruction of anti-personnel mines, improvised explosive devices (IEDs) and unexploded ordnance that killed more than 11500 people.

The NPA is actively involved in demining in Colombia, along with the organization HALO Trust, which has four mine search teams with SMRS in this country. For the detection of mines, dogs of different breeds are selected, but mostly they are young East European Shepherd Dogs and Belgian Shepherd Dogs Malinois, who have been trained for one and a half years to detect various types of explosives used in mines and IEDs. Samples of these materials are supplied by the Colombian state-owned company Indumil; dogs that often work in dense jungles or on dry sandy terrain need only a few grams of substance to detect.

Dogs can “sniff” more than 400 meters per day, which is 20 times more than a person with a hand-held mine detector can handle; in addition, having a small footprint and light weight, they are less likely to detonate an explosive object. When a similar device is found, the dog stops, sits down and points to the detected object until the leader approaches. After that, the dog receives a reward in the form of a rubber ball. By the way, among the counselors there are a lot of those who themselves have lost a limb during a blast on a mine or IED. 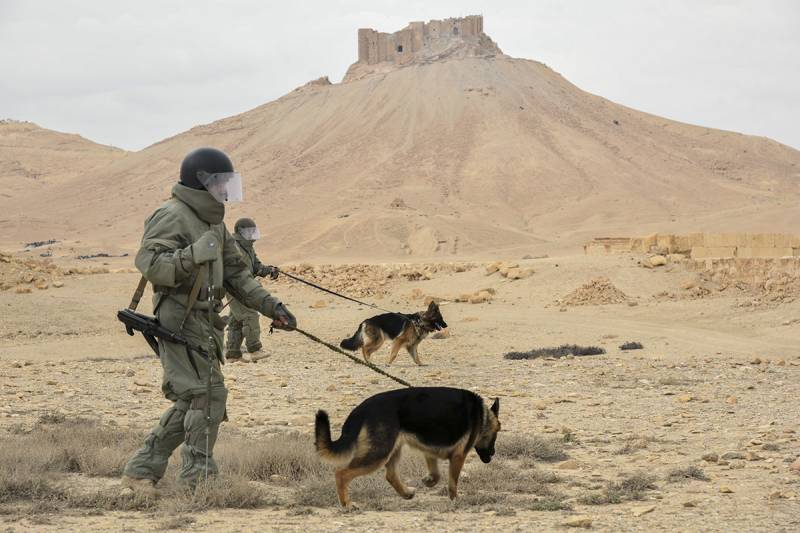 From Croatia to Colombia and Syria

The Croatian Mine Action Center (CROMAC) has been involved in Colombian demining projects since 2009, and in 2017, signed a memorandum of understanding on humanitarian demining with the Colombian Ministry of Defense, which also provides for the training of SMRS.

In addition to the military operations of the Russian Armed Forces against the Islamic State (IG, prohibited in the Russian Federation), in Syria, mine-search units from the Russian Mine Action Center did their work in 2015, taking part in the humanitarian demining of liberated cities, including Aleppo, Palmyra and Deir-ez. -Guest. By the end of 2017, Russian sappers of the Center cleared more than 6500 hectares of land, 1500 kilometers of roads, more than 17000 buildings and structures. They defused or destroyed more than 105 thousands of unexploded ordnance and IEDs.

In September 2017, a group of 170 demining specialists from the International Mine Action Center were sent to the liberated city of Deir ez-Zor. Specialists cleared more than 1200 hectares of land, 250 km of roads, more than 1800 buildings and structures and neutralized over 44 thousands of explosive devices.

The dog training center of the Armed Forces of the Russian Federation regularly holds the International Loyal Friend competition, which attracts the attention of specialists from Egypt, Kazakhstan, Belarus, Uzbekistan and Russia. In 2017, five groups of dog handlers, each with five counselors with three German and two Belgian shepherds, represented the Russian side. More than 200 calculations within the 47 teams took part in the qualifying stages of this competition. The Russian cynologists became the winners of the "True Friend" contest in August 2017. 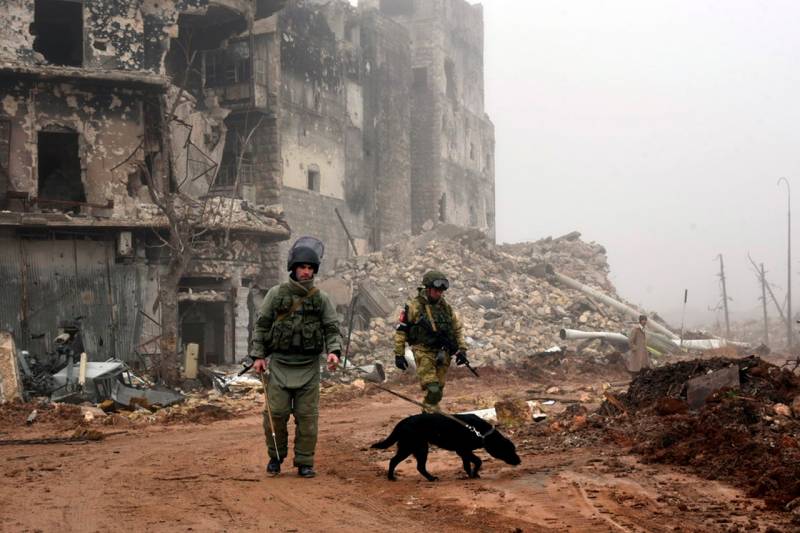 Dog units get at their disposal the German, Belgian, Eastern European shepherd dogs and Labradors mainly from the 470-center of dog breeding of the Russian Armed Forces. After a special mine training course, counselors should train dogs to detect non-detectable devices, various types of explosives and false IEDs. Special attention is paid to the behavior of dogs in combat conditions. In Armenia, canine calculations are trained in thin air at altitudes above 1500 meters above sea level, training is conducted day and night and in any weather.

Based on their experience in demining in Syria, the Russian military in a relatively short time organized training for Syrian specialists. More than 750 Syrian sappers were trained by experts from the International Mine Action Center of the Armed Forces of the Russian Federation at its branch in the Syrian city of Homs. This was told Anatoly Morozov, head of the Center for Mine Action in the Syrian Arab Republic. He added that the Center was organized in February 2017, in the city of Aleppo, but in April it was relocated to the city of Homs. “The skills acquired by the military during training allow them to independently perform mine action. A practical training course lasts a month and a half; at the same time, up to 100 people can study at the Center. ” 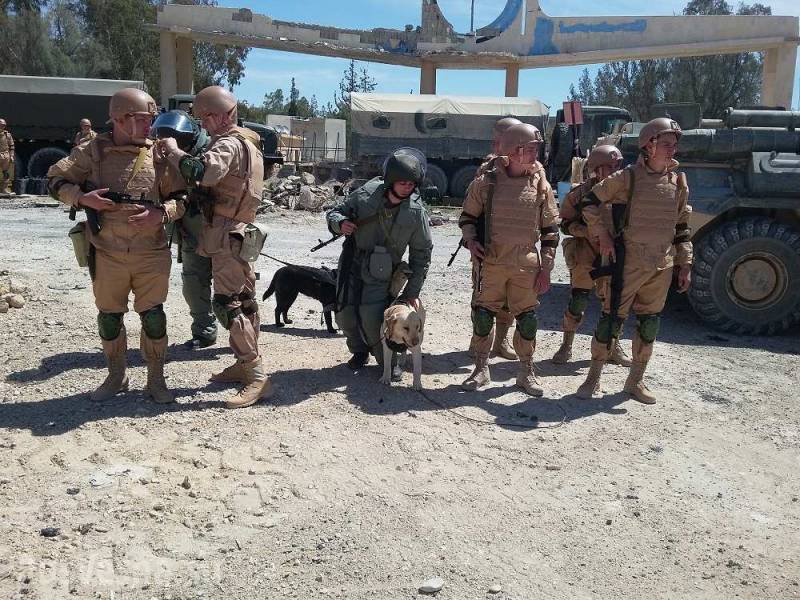 The Russian army uses its rich experience in demining not only abroad. In October 2017, the sappers of the Southern Military District cleared unexploded munitions from the Gvardeets, Kalinovsky and Alpine training complexes, whose total area exceeds 1000 hectares. More than 200 people were involved in this work and about 20 units of special equipment were involved. In addition, for the detection of explosive objects in hard-to-reach places, cynological calculations with mine detection dogs were used.

In December, a UN delegation led by Jean-Pierre Lacroix visited the Russian International Mine Action Center in Nakhabino, Moscow Region. The Head of the Center, Igor Mikhalik, told the delegation about how the methods and experience of demining operations in Syria are used in the educational process. The sappers of the Center showed the guests their equipment and humanitarian demining skills.

Ctrl Enter
Noticed oshЫbku Highlight text and press. Ctrl + Enter
We are
June 21 celebrates the Day of canine units of the Ministry of Internal Affairs of RussiaProtection and booking systems. Challenges, opportunities and trends
Military Reviewin Yandex News
Military Reviewin Google News
14 comments
Information
Dear reader, to leave comments on the publication, you must sign in.