Appeal of Vladimir Putin to the citizens of Russia

March 23 2018
439
After the CEC published the results of the presidential election in Russia, Vladimir Putin spoke with appeal to the Russians.

Today the Central Election Commission announced the final results of the election of the President of Russia. More than 67 percent of voters took part in them - more than 73 of millions of citizens. Over the 56 of millions of citizens voted for the current head of state - more than 76 percent of voters. This is the highest level of support in stories of our country.18 March, immediately after the announcement of the first results, I spoke at a rally on Manezhnaya Square and in my election headquarters. He thanked his supporters, all those who participated in the elections, - that night it was timely and necessary. However, given the large-scale, unprecedented support that you have given me, I believe that only the words of gratitude spoken in the center of Moscow are not enough. I feel an inner need to address directly to you, to those who supported my candidacy throughout the country, to all citizens of Russia. I believe that such powerful civic engagement, your responsibility, and consolidation are extremely important. Especially in the current conditions, in a situation of complex internal and external challenges that we face. 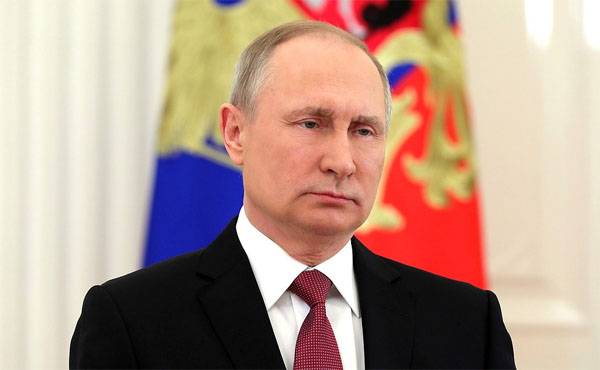 During the appeal, Vladimir Putin also touched upon problems in the country:
I know well about our problems. You, the citizens of Russia, rightly speak of reducing incomes, shortcomings in health care, housing and public utilities, and other areas. I see in your high confidence, above all, hope for a change for the better. I expect that this assessment is also connected with the work that has already been done, with the positive results that we have already achieved together in previous years. But this, of course, is not enough. We need a real breakthrough. And in your active participation in the elections, in your support I see readiness for such work, for such changes.

The President of Russia noted the personal responsibility to the citizens of the country:

I understand my colossal responsibility to the citizens of Russia, to the country. Everything that was said during the election campaign should be done. Of course, I really want the problems that the citizens put to be solved as soon as possible - we will strive for this. But it would be absolutely irresponsible to promise to do all this immediately, right now, to change everything overnight. This would be only a beautiful, ostentatious gesture, designed for a short-term, momentary effect. And we need consistent, profound changes, well-thought-out steps that will bring a steady, positive result, both today and in the future.

About the implementation of the message:
We will create new jobs and increase the efficiency of our economy, increase real incomes of citizens and reduce poverty, develop infrastructure and the social sphere - education, health care, solve environmental and housing problems, renew and improve our cities and villages. And all this - on the basis of a powerful technological breakthrough that we have to make. I spoke about these tasks in the Message. In essence, this is a clear, concrete, detailed plan for our common actions. I am sure that he is realistic, correct and reasonable.

At the same time, I want to emphasize that all the upcoming decisions, even the most difficult ones, will be dictated by only one thing - the need to overcome the lag in some areas, to ensure the dynamic development of the country and the new quality of life of people, to respond to the historical challenges we face. And most importantly, any of these decisions will ultimately be made solely in the interests of our country, our citizens, for the sake of our children and future generations.
On the need for open action by the authorities:
We will act openly, discuss all our key decisions with people, explain why we are doing this, and not otherwise, what goals we want to achieve. I emphasize that our development agenda is consolidating, nationwide, and should unite everyone.

About political competition:
I would like to appeal to all the social and political forces of the country. I understand that the logic of political competition lies in the fact that the current government is criticized: on the left and on the right - always. Yes, criticism, disputes, discussions are necessary, important, but there should be no place for irresponsible populism in them. The main guideline for all, especially today, should be the national interests and well-being of people. This is the basis for our consolidation and collaboration. I appeal to those citizens of Russia who voted for other candidates. With respect to your position, your choice. Political preferences should not divide us. We are all patriots of our country, and we have one common concern - the fate of Russia, its prosperity.
We must embody our unity, responsibility, common understanding of goals, aspirations of millions of people in the development of Russia, in a powerful movement forward.
As a result, Vladimir Putin once again thanked the Russians for their support:
Thank you again for your support and trust. I am sure that together we will surely succeed.