The crash of the passenger aircraft of the company Germanwings in France: a detailed investigation

March 24 2018
28
A private detective and human rights activist from Germany is conducting a new investigation of possible technical malfunction in order to restore the presumption of innocence unfairly violated during the accusation of the second pilot Andreas Lyubits in the crash. The prosecutor's office of the city of Dusseldorf (Germany) opened a criminal case in connection with the newly discovered circumstances of the accident. 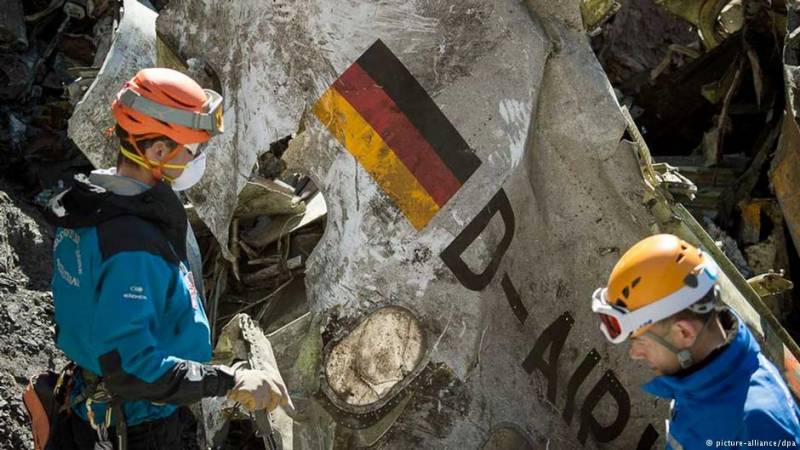 On March 24, 2015, an Airbus A320-211 owned by Germanwings crashed in the highlands of the Alps of Haute Provence (France). Paris Office of the European Agency aviation Security Agency (EASA) investigated the disaster and reported that the tragedy was caused by the co-pilot of flight No. 4U 9525, who was heading from Barcelona to Dusseldorf, who was mentally unhealthy and intentionally caused the tragedy to commit suicide.

As a result of the publication of a preliminary report issued by the EASA official office in France, many German media actively began to blame the co-pilot Andreas Lübitz mentioned in the report, thus violating the presumption of innocence enshrined in the European Convention for the Protection of Human Rights and Fundamental Freedoms article 6. In this vein, the biased, one-sided coverage of the disaster by the German media has formed a generally accepted attitude of the public: they say that in the case of a tragedy with flight number 4U 9525 only the human factor is possible.

Abusing the one-sided opinion of the German media, a number of German lawyers gathered 149 relatives of the dead passengers (excluding relatives of the biased accused co-pilot Andreas Ljubitsa) to file a lawsuit, first in the United States and then in Germany itself against the German airline Lufthansa, which is the owner of Germanwings. With the help of the German media, lawyers gained an advantage in bringing airlines to justice with subsequent compensation for multimillion-dollar damage to the relatives of the victims and the lawyers themselves. There is every reason to suspect that one-sided coverage of the disaster by some media in Germany may be caused by professional PR trials organized by the involved lawyers.

One woman, who works in the field of law, conducted her own international investigation and probably discovered the real cause of this plane crash, after which she initiated the re-initiation of criminal prosecution in the Public Prosecutor’s Office of the German city of Düsseldorf. Where an investigation was previously carried out related to the aforementioned case of the influence of the human factor is not supposed to be the only possible cause of this plane crash. The German activist, who wants to achieve justice, has done a lot of work in the framework of a deep study of various facts and expressed a reasonable suspicion of a technical malfunction. This happened in January 2018. The name of this activist is Nadi Muller, she lives in the city Offherheim (Germany).

The theory of human rights activist Nadi Muller from German Offersheim was that the pressure barrier inside the stern of the aircraft broke due to a defect. A report by the EASA Civil Aviation Incident Investigation Division of the Paris Aviation Bureau explicitly refers to airflow noise caused by a malfunctioning pressure manifold. This source also mentions negotiations between crew members regarding technical problems on board. After consultations, the crew commander decided to leave the cockpit to go to the tail of the aircraft, where they can independently determine the cause of the noise, presumably related to the pressure barrier, these data are contained in the official EASA materials. While the aircraft commander visited the tail section of the aircraft, this pressure barrier collapsed, which suddenly led to a drop in pressure in the cockpit. Following the theory of Nadi Muller, this pressure drop caused a loss of consciousness in the second pilot, who was alone in the cockpit, while the crew commander was in the tail of the plane, where the pressure barrier was installed.

To restore pressure, the lonely second pilot immediately launched the emergency system to lower the aircraft, after which he lost consciousness due to lack of oxygen in the cockpit. During this incident, the crew commander attempted to get into the cockpit. All this fully corresponds to the content of EASA materials. The plane crashed in the highlands, at an altitude of about 10.000 feet. Due to the high mountains in this area, the co-pilot did not have time to regain consciousness after equalizing the pressure and stop the decline of the aircraft. Mountain range became an obstacle that prevented his attempt to escape.

This co-pilot, who struggled, with great courage to try to save the plane and the lives of passengers, was subsequently biased against the fact that he deliberately crashed the plane as a result of a suicide attempt caused by the alleged mental illness. In many ways, this is the result of purely financial interests. This was the reason for the slander of Andreas Lubitz.

Surprisingly, the Public Prosecutor’s Office in Düsseldorf discontinued the above-mentioned criminal investigation regarding the version of a technical malfunction after the German edition of Bild-Zeitung began to publish materials about this criminal case. This newspaper played a leading role in the campaign to discredit the accused co-pilot Andreas Ljubica as a “mass murderer of suicides”. Therefore, the parents of this dead (and, accordingly, defenseless) co-pilot filed a lawsuit against the powerful German media to force the publication to comply with the presumption of innocence rule.

This newspaper was informed about the investigation of Nadi Muller, as well as the initiation of a criminal case No. 10 UJs 37 / 17, which is led by the prosecutor in Düsseldorf. It is known that between the journalists of this newspaper and the investigators of the Düsseldorf Prosecutor’s Office there was an exchange of views, it is also known that this powerful newspaper has very good connections at the top (up to the top leadership of Germany).

In early February of this year, Bild-Zeitung published an article in which it was denied that the relatives of the victims of the crash were pursuing financial interests with their suit. This source showed these relatives very emotionally, having done everything possible to arouse the pity of the readers and enlist their sympathy. The picture presented was extremely one-sided. In addition, the article included a letter from the victims to the respondent, Lufthansa Airline, which was also written in an extremely emotional style. But after a detailed examination of the letter it is clear that it was developed by a professional legal adviser.

From the point of view of the author of these lines, who has been a practicing lawyer for more than 13 for years, this article with the enclosed letter was a classic example of a PR trial, as is common in the United States, when the law justifies multimillion-dollar losses.

The presence of these facts suggests an attempt by the German Bild-Zeitung to take on the role of “defender” of the victims, since the publication biasedly illuminates the role of defenseless dead co-pilot Andreas Ljubitsa from the very beginning to the present day, presenting the human factor as the only version of the crash.

Faced with this PR litigation, Nadia Muller filed a complaint with the German Press Council to initiate proceedings against the Bild-Zeitung. In a statement, Nadi expressed suspicion of several violations of the rules of the organization that controls the work of the press in Germany. The complaint is pending from February of this year.

The goal of human rights defender, Nadia Muller of Oftersheim, is to launch a detailed investigation into the technical issue of the pressure bulkhead as the real cause of a plane crash. It is very important right now, on the 3 anniversary of the tragedy, to prove that the suspect co-pilot Andreas Lubits was innocent and could not be a “suicide - mass murderer” responsible for the death of 149 people. Through the publication of these merciless articles in the media, the wrong version has spread. The truth of a technical fault should no longer be covered; it should be open to the general public. This is the desire of a brave woman from the city of Offhreime on the third anniversary of the tragic plane crash.

Ctrl Enter
Noticed oshЫbku Highlight text and press. Ctrl + Enter
We are
The investigation is over. Forget it?What you didn't want to know about England
Military Reviewin Yandex News
Military Reviewin Google News
28 comments
Information
Dear reader, to leave comments on the publication, you must sign in.