So what about the income tax?

March 23 2018
259
Literally the next day after the statement by the former Finance Minister Alexei Kudrin, who now heads the Center for Strategic Research, about the presence of a “window of opportunity” for the new Russian government, materials appeared in the media about allegedly considering the increase in income tax.


To begin with, it is worth recalling the Kudrin words expressed in the format of an article in the Kommersant. According to Kudrin, the new cabinet of the Russian Federation will have no more than two years to begin reforms, many of which are being postponed today due to "unpopularity." After this statement, economic experts and ordinary citizens who are interested in the economic realities of the country regarded Kudrin’s words as another call for raising the retirement age.

However, the first information about the occasion after the Kudrinsky statement did not touch the pensions. The Vedomosti newspaper, which is distinguished by a neoliberal approach to covering events, including references to “unnamed informed sources,” appeared a publication entitled “The Government is discussing the increase in income tax.” In the publication, referring, as already noted, to unnamed sources, including (quote) "a person who knows about this from the participants of the (government) meeting," stated that the Medvedev Cabinet discussed the increase in the tax rate for individuals from 13% to 15%. At the same time, it was stated that the government also discussed the issue of a non-taxable minimum. And about the level of this minimum - not a word.

From the material "Sheets":
The decision was finally not made, the official warns. Another says that “consensus has been reached.”

In the news agency Interfax At the same time, a statement was submitted by Dmitry Medvedev, Prime Minister of the Russian Federation, who did not report on the details of the meeting held on tax policy, but said that “the tax system needs adjustment”.

The same "Interfax" led the statement of Deputy Prime Minister Arkady Dvorkovich on this issue. According to Dvorkovich, “the difference between 13 and 15 percent is not dramatic.” From the news agency material:
This number - the 13% rate - is also not a fetish, it is no different from 14% and 15%, it is just one of the possible numbers. I repeat: if there is an understanding of the justice of new approaches in comparison with the present, it will be a consensus in society, then it really makes sense, I do not see anything terrible in it. We have been living with the 13 interest tax long enough, and if the additional 2 percentage points will go to health care, that’s definitely a plus.

If 13% is no different from 14 or 15 percent, then this “somewhat” contradicts the laws of elementary mathematics. And when it comes to the income of the population, one can talk about the direction of funds (from a hypothetical tax increase) to health care, but this is in any case an increase in taxes. And so that on this issue, as has been said, a consensus has emerged in the society, the government will obviously have to sweat.

On the other hand, if the government discussion of the topic of increasing income tax did indeed take place, then we must not forget that we are still talking about the current government. Who said that the same people will be in the new composition? It is clear that the initiative of representatives of the current cabinet of ministers that is being put forward today depends directly on whether this or that official from the current government magazine continues its work in the new cabinet or will be "thrown to another front."

In fact, any hints on discussing the topic of raising this tax (to “not dramatic” 2%) in the context of the fact that the country's economy is still growing at a lower (than this value) rate, to say the least, strange. By the way, even Mr. Kudrin, actually calling on the authorities to move on to unpopular reforms, considers the idea of ​​increasing the income tax rate in Russia too unpopular. More than a month ago, in the course of the Sochi Investment Forum, the former head of the Ministry of Finance noted that raising basic tax rates to 2024 was counterproductive. At the same time, Kudrin said that the reason for such counterproductiveness is precisely vague economic growth, which is still below the world average.

A separate question: where will the state get money for the implementation of all that was announced as strategic goals in the message of the president to the Federal Assembly? Here, the government is accustomed to two ways out: the first is to move to unpopular reforms, including the pension one (and this can “agitate” the public), and the second is to put many presidential initiatives on the brakes and work in principle, it has often happened lately). There are, however, other options. True, they are all from the realm of fantasy: wait for oil on 120 per barrel or (and this is already a presidential decision) - not to rearrange the beds, but to change personnel ... Well, you understand ...

After the appearance in the media of the first reaction to the rumors about a possible increase in tax rates in the Russian Federation, the Minister of Finance was called to the president’s office. Understanding that he might not be in the next government, Siluanov decided, as they say, to smooth corners, and reported to the president that taxes in the country would not rise in the near future.

Head of the Ministry of Finance:
In general, the tax burden will not be increased, we say that we will work precisely in terms of improving tax collection. A large body of tasks is a small business, whose share in the economy is growing today. We believe that there are also reserves here due to a more complete tax collection. 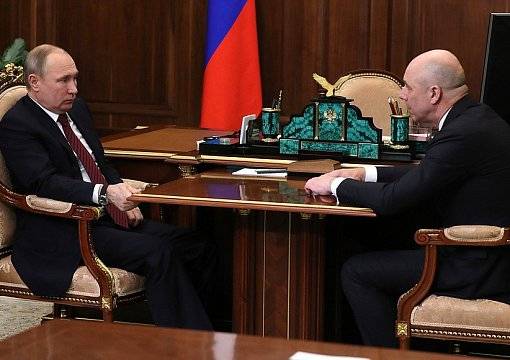 From all this motley picture of statements and publications that contradict each other in places, one conclusion can be made: the current ministers of the economic bloc just don’t want to be without ministerial work after the inauguration of the president and at the same time understand that now everything will slow down the brakes more difficult. At the same time, the ministerial “bride” before the president (after appearing in the media about “unpopular” initiatives) will definitely continue until the inauguration. Perhaps in this format: “If Nikanor Ivanovich’s lips were to be attached to Ivan Kuzmich’s nose, to take some swagger, like Baltazar Balthazarych, yes, perhaps, add to this the dignity of Ivan Pavlovich ...” Classics

Ctrl Enter
Noticed oshЫbku Highlight text and press. Ctrl + Enter
We are
Raising the retirement age. Forced measure for the development of the economy or a threat to the social order of the country?Kudrin against Rogozin, or New revelations of the ex-minister
Military Reviewin Yandex News
Military Reviewin Google News
259 comments
Information
Dear reader, to leave comments on the publication, you must sign in.