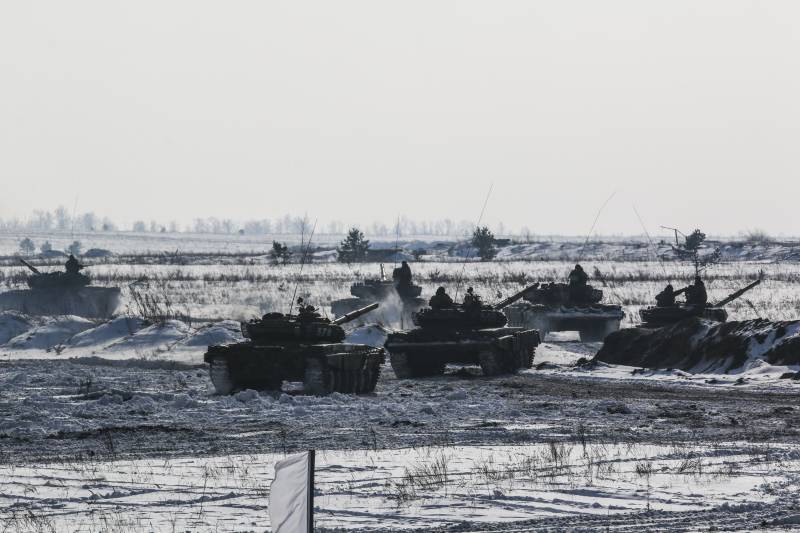 We often talk and write about the old, Soviet army. We speak in excellent colors. Many of the army veterans remember how and what we trained soldiers. And they cooked mostly good. The soldiers, not just once or twice in the post-war period, showed not just courage, but heroism, dedication, willingness to die for the sake of victory. 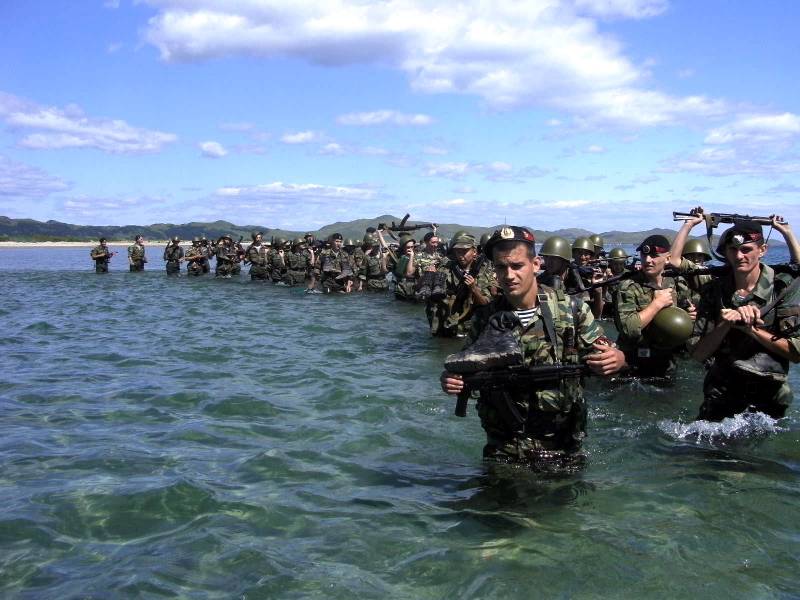 The most trained and trained were, perhaps, the airborne troops and the marines. This is not a whim of commanders and chiefs. This is a dire need. Airborne and MP units were supposed to fight the enemy on its territory, with a huge numerical superiority not only in manpower, but also in equipment and weapons. In fact, the paratroopers were suicide bombers.

However, military operations in Afghanistan, and then in the Caucasus, where paratroopers and marines were actively involved, revealed the shortcomings of such units and formations. In this regard, the reaction of one of the generals, the commander of a motorized rifle formation, on the exams at the Academy of the General Staff, after becoming familiar with the weapons and equipment of the Airborne Division, is quite indicative. "Well, and how to fight this?".

Last year we wrote about the reinforcement of air infantry units with new artillery systems, infantry fighting vehicles and armored personnel carriers. They wrote about tank units that have become mandatory for the Airborne Forces. And now the time has come for innovation for the Marine Corps. The fleet will receive heavy weapons.

Talk about the need for such weapons were long. The tactics used by the marines are long obsolete. In fact, this tactic was born in the Second World War. 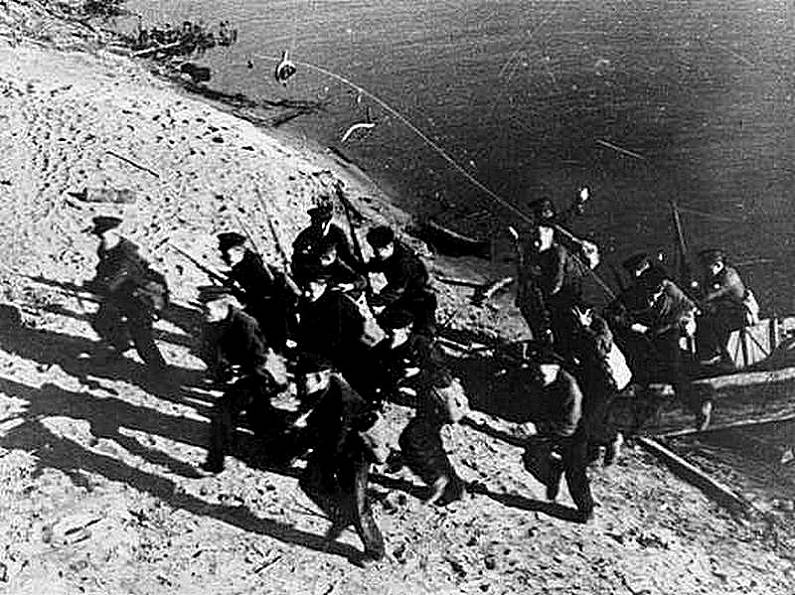 Has the world changed? Yes.

75 years ago everything was easier. In coastal operations, support was provided by artillery ships and aviation. In the period of the Second World War, a completely feasible task. Coastal batteries were in certain places, and field artillery, even of large calibers, was not afraid of ships. And the air defense of ships more or less protected from enemy aircraft.

The appearance of missile systems has completely changed the situation. The coastal anti-ship complexes "drove" the ships from the landing site and effectively deprived the Marines of support from the sea. 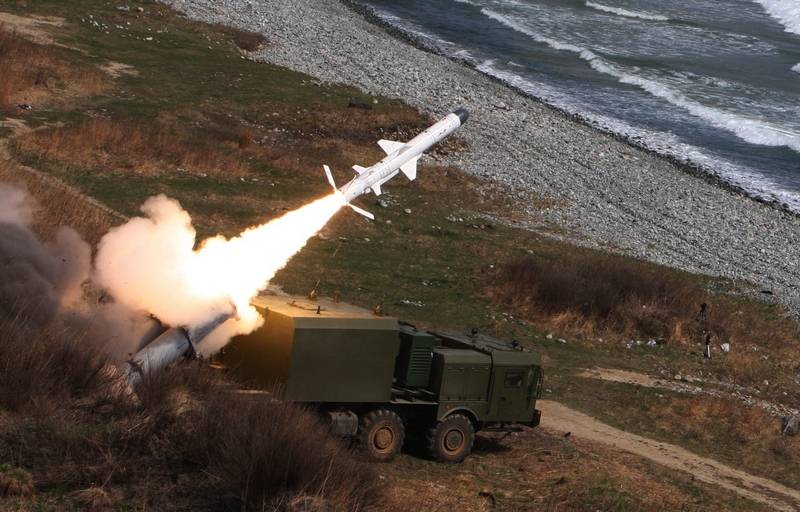 In fact, the ship / ship mix has become more vulnerable as a target for coastal missile systems. And do not forget about EW systems.

If it is serious, then with such a serious operation as the landing of troops and the seizure of, for example, an island, ships should pay more attention to their own safety. Using all means of air defense, missile defense, EW.

Why? Yes, everything is simple. The cost of the same BDK is not comparable with the cost of the battalion of marines that the ship is transporting.

It turns out that as soon as the ships enter into real contact with the enemy, the protection of the marines is at the 80% of the marines themselves. 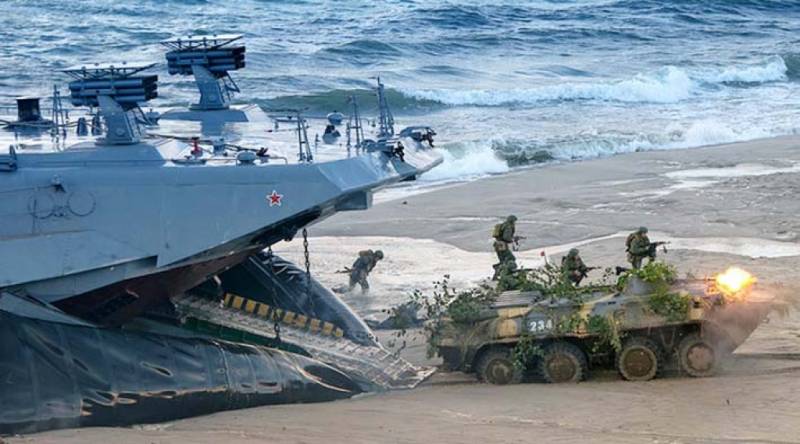 And while ships and coastal complexes will throw missiles, interfere with and suppress enemy complexes, marines will have to land and perform assigned tasks. 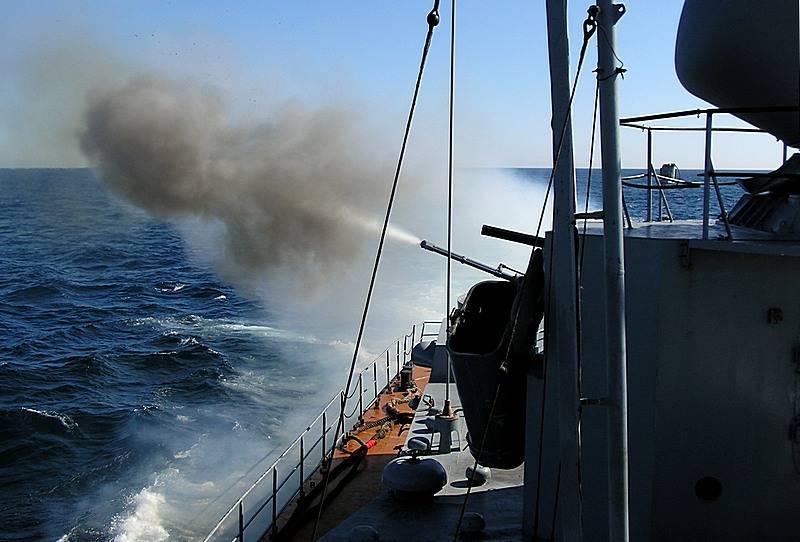 It is clear that if we are talking not about uninhabited islands, but with something like the Kuril, then they will be waiting there. Accordingly, the amphibious assault force should have something that will allow fighting on an equal footing with the enemy. 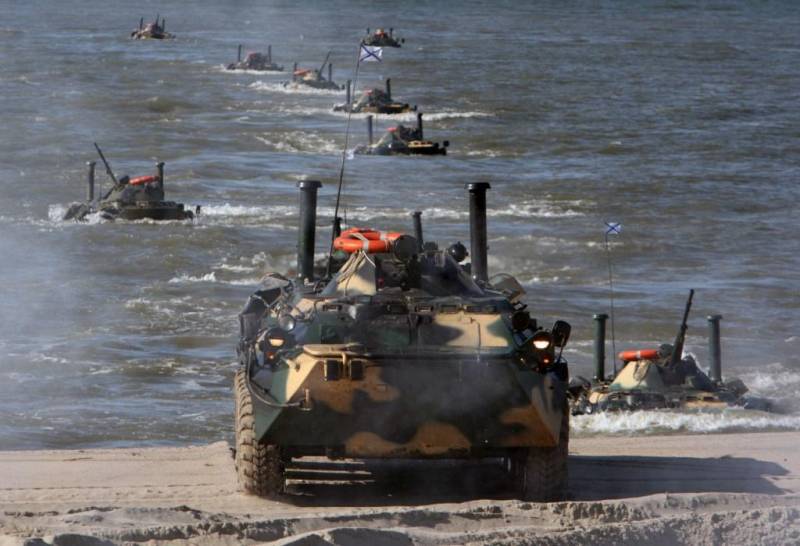 The armored personnel carriers and infantry fighting vehicles under these conditions will not be able to provide real fire support. Not to mention the old tanks PT-76. Yes, and the release of these rarities stopped in the distant 1967 year.

For a long time among the commanders of the landing force and the marines there was the opinion that military equipment for such units should, respectively, “jump with a parachute” or land on the coast “by swimming”. And such an opportunity appears only in the case when other things necessary for the battle are suffering - the caliber of guns, armor, some means of protection of equipment that are already quite common for infantry.

As a result, it was decided to establish tank units (battalions) in the brigades of the marines.

Moreover, depending on the location of the brigades, the tanks will be different. Southerners will receive T-72B3, but the Northerners will get gas turbine T-80BV. The reason is simple. Despite the efficiency of the diesel T-72, in the Arctic, such tanks are less reliable. And the weapons and equipment of the machine are comparable. 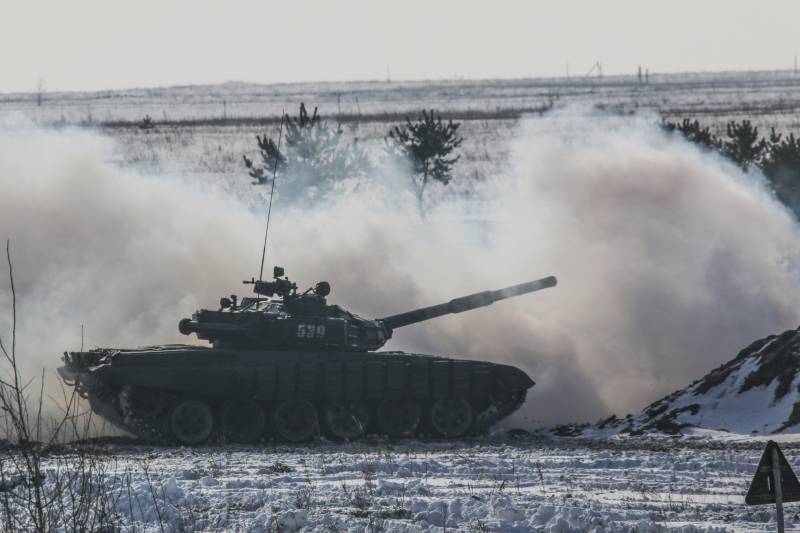 And the first - and what can tanks on the coast? Wouldn't they be a great target for an adversary? Will be! And they will be the first and most important target. And any paratrooper? Any sailor, midshipman, officer will not? But during the seizure, it will also be a fortress capable of destroying enemy firing points and supporting the landing with "fire and maneuver." And after the capture of the tank will be the most important link in defense.

Our recent one immediately came to mind. historical investigation on the feat of Alexander Matrosov. Then there would be at least one T-26 or BT-7 among the advancing - and the infantrymen would not have to perform feats. A 45-mm tank gun would calmly pick out the bunkers without coming close to it.

What is not an argument?

The second question that arises from a thinking person is: why increase the staff of the brigade? After all, a tank battalion is not only tanks, but also many service services. Isn't it easier, if necessary, to attach tank units and even units to the brigade commander?

Alas, the effectiveness of the attached units is much lower than the regular ones. And the point is not in the training of these units, but in the specific situation, the specific brigade commander will not know in detail the strengths and weaknesses of the specific dowry unit. And this in the situation of landing is an important aspect.

And the third question. Not less important. Does our fleet today are heavy vehicles to the coast? After all, a tank, unlike an armored personnel carrier / infantry fighting vehicle, does not float. It can pass through the bottom, but they haven’t been taught how to swim.

Means of delivery is. BDK, large landing ships according to our classification, according to the western are called tank-landing ships. They are able to transfer parts over long distances and with heavy weapons.

And there is also the latest boat project 21820 "Dugong". The newest air cavern boats capable of transporting tanks as well. 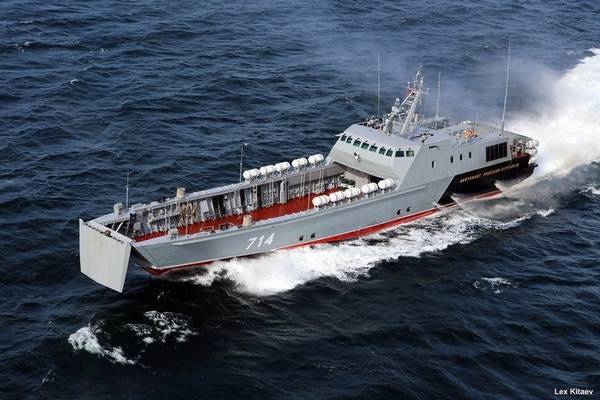 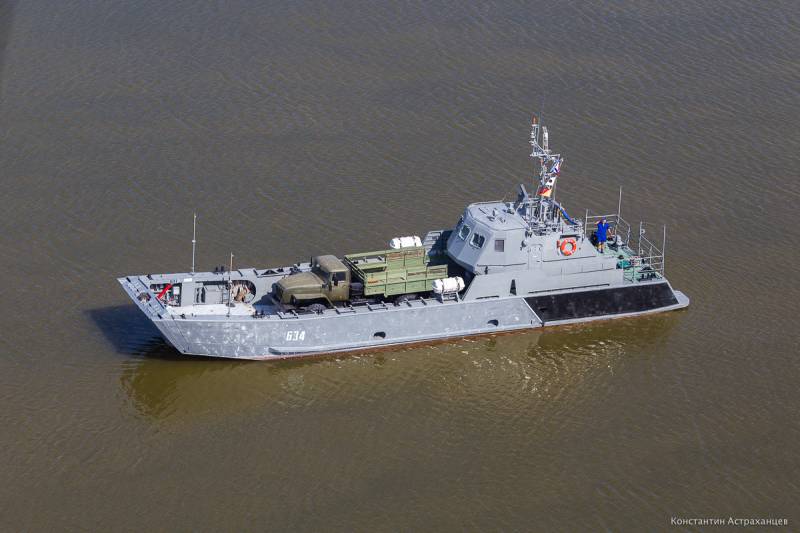 There is, finally, a small landing ship of the 12322 project "Bison". The largest hovercraft capable of lifting 150 tons of cargo and landing troops almost anywhere on the coast of the world's oceans. 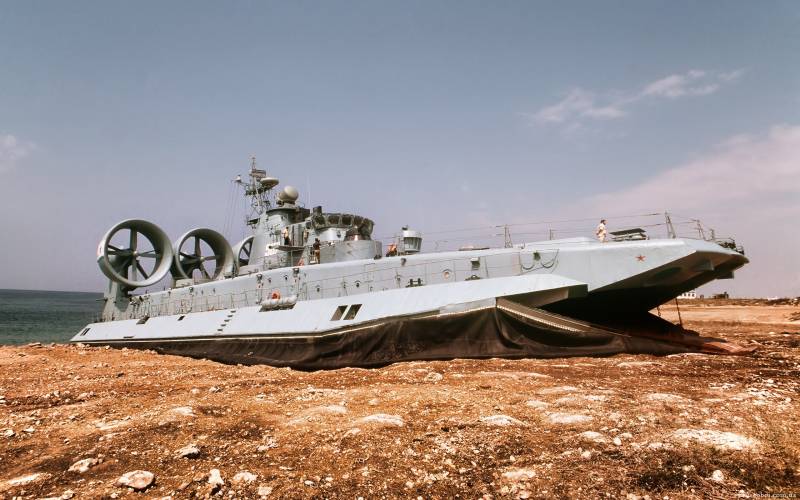 And now it's time to return to the beginning of the article. What is new in the fact that the marines are reinforced with tanks in terms of the range of tasks solved by such compounds?

Recall a recent story. Marine brigades today are involved in military operations in exactly the same way as airborne divisions and paratrooper regiments. They solve completely different tasks that were not peculiar to them before. These are units and subunits, if you will, of the expeditionary forces.

Someone was surprised by the participation of marine brigades in the Chechen wars? Someone is surprised at the appearance of naval officers in Syria or anywhere else in the world? Marine Corps today performs the tasks that perform other parts, and compounds of high alert. And so these tasks in particular require the strengthening of the power of brigades.

It is necessary to achieve such a state of affairs in which the marines could not only capture bridgeheads on the coast and hold them until the main forces approach, but also conduct independently combat operations for a sufficiently long period with ground units and enemy formations.

And the last. Modernization of the existing T-72 fleet is being carried out quite actively today. More than a hundred tanks will be delivered in the near future in the army units and subunits. By the end of the year, the figure should grow to one and a half hundred. It seems that the first brigade will receive them soon. In general, the formation of the battalions will be completed in a year or two.

Ctrl Enter
Noticed oshЫbku Highlight text and press. Ctrl + Enter
We are
The Ministry of Defense is starting to eliminate the Airborne ForcesQuestion to the President of Russia: To be or not to be airborne?
Military Reviewin Yandex News
Military Reviewin Google News
33 comments
Information
Dear reader, to leave comments on the publication, you must sign in.