The head of the DNI: Ukraine has lost control over the army, territory and faith in the people

March 22 2018
20
The Ukrainian authorities continue to exist in their parallel world, and they believe that the Ukrainian people are a “flock of sheep”, which cannot distinguish truthful information from lies themselves. Thus, Ukrainian Prime Minister Vladimir Groysman stated that the Ukrainian economy managed to “completely get rid of the Russian economy.”


Groisman:
It is clear that when countries are close, it is very important to completely sever all relationships. But I must say that it was Russia that took absolutely unacceptable steps in military aggression, economic aggression, and commercial aggression against Ukraine. Therefore, we were forced to reorient our economy to completely different markets. We are getting stronger from these challenges.

The facts show that the words of Groisman about “not connected with the Russian economy of Ukraine” are a banal fake. Thus, according to the results of 2017, the trade turnover between the Russian Federation and Ukraine grew by almost 29% and approached the 10 billion mark. This, of course, is several times lower than, for example, in 2013, but clearly makes it clear that the link between economies is very high. Moreover, Russian imports to Ukraine in 2017 have increased by almost 40 percent, reaching the level of 6,3 billion dollars.

Against the background of the statements of Groysman, one cannot but pay attention to the statements of the head of the DPR, Alexander Zakharchenko. During the meeting with students of republican educational institutions, Zakharchenko noted that for Donbass there was no longer a way back to Ukraine. According to him, the Donbass can only agree on good-neighborly relations, and the Kharkiv People's Republic could arise on the territory of Ukraine. "Politnavigator" quotes the words of the head of the DPR:
We are fighting not with the Ukrainian people, but with a certain part of the population that has become infected with the virus of Nazism and fascism. We also fight with commercial structures and people who, thanks to the conflict in Ukraine, want to weaken the Russian Federation. A lot of the DPR servicemen have registrations in the Kherson, Mykolaiv, Kharkiv, Dnipropetrovsk, Zaporizhzhya regions, there are also Lviv, Kiev residents, guys from Uzhgorod, from Vinnitsa. Everyone has an opinion. 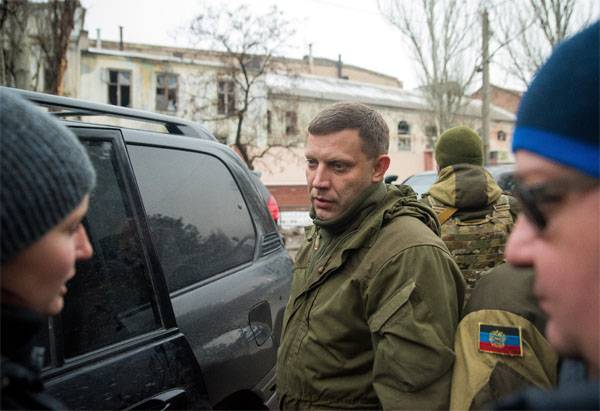 Why Ukraine will never be the same? You can’t live in a country that allowed itself to cover with blood a huge chunk of its territory - tens of thousands of dead, hundreds of dead children, old people, women, kindergartens, schools. If the state sends an army to suppress those who disagree, then it is no longer a state, and the army does not belong to it. Ukraine lost control over the armed forces, over the territory, and most importantly - Ukraine lost faith in its people.