March 23 2018
57
The former “prisoner of Putin”, the hero of Ukraine and the people's deputy Nadia Savchenko returned to Kiev from Europe, where, she says, testified against Poroshenko in order to try her luck in her homeland, where she faces either prison, or murder, or triumph. 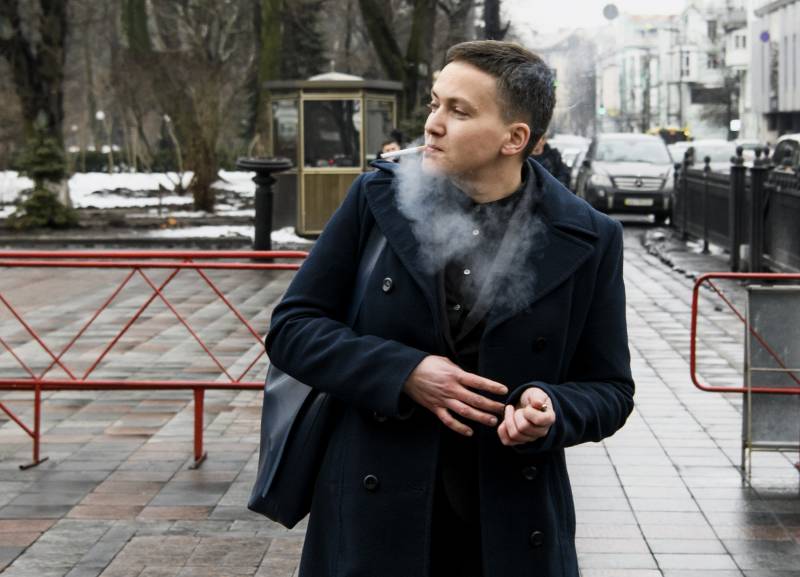 Investigation into the case of the head of the Center for the Exchange of Prisoners Vladimir Ruban, arrested by the Security Service of Ukraine for smuggling weapons from the DPR and accused of preparing a coup d'etat with the execution of the Verkhovna Rada, came to Nadia Savchenko. It turns out that it was for Nadia that Ruban carried weapons, including mines and mortars, Nadia, after all, the famous mortar gunner. How Poroshenkovsky’s minister with the physiognomy of a criminal, George Tukas, turned out to be right, immediately said that “Ruban is a pawn in a criminal organization”. Savchenko, obviously, a figure, and who will be the queen, everyone guesses to himself.

Nadina's figure turned out to be a tough nut to crack: with parliamentary immunity, with a rather figurative language (“compromising me - what the sky is painting”), with military experience and, as she hints, with ties to military friends. She immediately raised a rebellion, albeit a solitary one, in the form of very courageous interviews and press conferences. What does she say to them!

“Poroshenko is under Putin’s heel, and Zakharchenko and the DPR are also Ukrainians,” it turns out that the difference between Savchenko and Zakharchenko is that they hate Poroshenko’s regime from different sides. Nadya threatens Poroshenko with the fact that “half of the Armed Forces of Ukraine knows it,” and she knows that “there are enough military in Ukraine ready for a coup” who will gladly help “unload the furniture to Ruban”. Only about “Kedr” - special forces officer and SBU agent Pavle Balov, who substituted Ruban under the Security Service of Ukraine, Nadia refuses to speak, refers to military secrets, which can only be discovered when interrogating a polygraph in the presence of the media, preferably European.

Nadya, the first of the people's deputies, said the idea publicly walking around the “separatists”, experts and common people that Euromaidan organized the West, and one of its leaders, Pashinsky, led the snipers who shot the “heavenly hundred” to Maidan. All of this, as it were, is already known, but now the seditious truth has officially sounded from the mouth of the people's deputy. Challenge the main myth, which holds the "Poroshenko regime", by the way ...

What do we see that we, so to speak, see? From Vladimir Ruban, the fire of the new coup has spread to Savchenko, and where will he go next? Nadia, of course, is a more attractive leader of protest than the American protégé and Georgian, the former president of Georgia Miho Saakashvili. She was not afraid to return to Kiev, although the people's deputy Teteruk from the Yatsenyuk-Turchinov-Avakov fraction tried to intimidate her. She has a lot more chances to become the assembly point of the new Maidan than Saakashvili’s.

Poroshenkovskaya power, and even the SBU, are afraid of Nadia: they do not know what to do with her so militant. She blames Ukraine’s troubles at the same time on Russia (Putin) and the West (having organized all the Maidan in Ukraine). That is, Savchenko serves as a force independent of Poroshenko and the West, and on the other hand, from Putin and Russia.

Poroshenko, and Gritsak with the Security Service of Ukraine, now they are thinking: why did they exchange Nadia with Putin? To take Nadia or not to take? Option: declare Nadya "Putin's agent", and then take it, but are afraid to go over with the partners. If from Savchenko, or its bright image, the flame is kindled, then it cannot be extinguished, as it was possible to extinguish Mihomaydan ...

The situation is directly antagonistic and surreal: someone must plant or kill someone. The press publicly and seriously discusses the subject of the prison and the murder of Nadi with her. Nadia hints, in turn, at a possible revolt of the Armed Forces of Ukraine, and that she can become the banner of the revolt of the Armed Forces of Ukraine. The main intrigue is now moving to the Verkhovna Rada: will Rada remove parliamentary immunity from Nadia, or not?

How to react to all this in Russia? Save Nadia Savchenko as Yanukovych? She is already under Gritsak's cap. Then it is better to “save” the head of the Security Service of Ukraine, Gritsak. Soon, “Kremlin agent” in Ukraine can be anyone, from Ruban and Savchenko to the head of the “Ukrainian Choice” Viktor Medvedchuk and former Prime Minister Yulia Tymoshenko.

Is all this absurdity happening in the 21st century in Europe? Yes, the United States delivered Latin American fascism to Europe, with “death squads” and without brakes. The current leader of the "Right Sector" Andrei Stepnitsky called on social networks to kill all the unreliable. And - silence ... And then a raid began on the "accomplices of Russia" in the media: the authorities listen to Andrei.

On the eve of the Russian elections, observers were expecting a military outburst in the Donbas from the Armed Forces of Ukraine. That did not happen; instead of external escalation, we see internal escalation in Ukraine, the first excesses of the “night of long knives”. The Nadia lonely uprising can indeed escalate into a riot of the Armed Forces of Ukraine named after Nadya Savchenko, perhaps posthumously.

Ctrl Enter
Noticed oshЫbku Highlight text and press. Ctrl + Enter
We are
The obvious combination: Ruban - Medvedchuk - PutinReports from the militia of New Russia for 27-28 September 2014 of the year
Military Reviewin Yandex News
Military Reviewin Google News
57 comments
Information
Dear reader, to leave comments on the publication, you must sign in.