Serbian son of the regiment

March 23 2018
37
War breaks into people's lives unexpectedly. Both adults and children suffer from it. The latter, as a rule, become victims or refugees, but few of the guys are forced to become heroes and fight side by side with adults. Sometimes, in order to protect what is dear to a young soul, it is necessary to withstand a lot of trials and prove its usefulness.


One of these young warriors was Spomenko Gostich, who fought on the side of the Bosnian Serbs. He did not live to see the 15 anniversary - 25 died years ago, 20 March 1993. But in this short life it contained quite a lot of grief and dangers.

Spomenko Gostich was born in the village of Doboj (in the north of Bosnia and Herzegovina) 14 August 1978. This village is known for the fact that during the Second World War, a partisan movement was active in it. Maybe the place of birth was not random, and история his small homeland predetermined the character of the boy. In school, he went to the city of Maglai. Early lost a father. 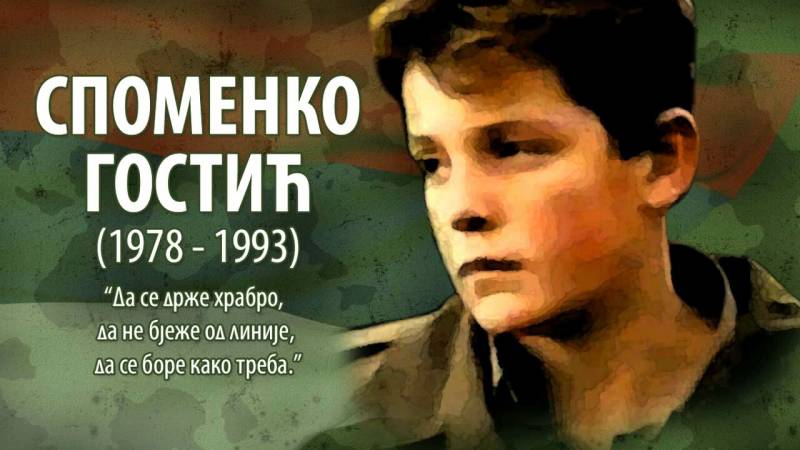 Then there was a united Yugoslavia, and no one could have imagined that the collapse of the socialist camp would happen, after which world predators would need to tear the Balkan country to pieces. About how and why the war broke out in Bosnia and Herzegovina, you can talk for a long time. But here - not about that, but about a specific young hero.

In 1992, the life of all Yugoslavs, including Spomenko’s family, changed dramatically. The boy was forced to leave school. Together with his mother, he moved to the village of Yovichi near the town of Ozren. His grandmother lived there.

Unable to withstand the war, the mother died soon after the start of hostilities. It happened in April 1992. Under the conditions of the siege for her could not find the right medicine. In September of the same year, Bosnian Muslims shelled a village with mortars. As a result of this crime, Grandma Spomenko died. The teenager was left all alone.

He joined the Bosnian Serb army. And he had a desire - to fight and avenge his relatives. At first, the fighters did not want to take it. On the one hand, they understood that the boy had no one left. On the other hand, adult fighters usually say to such desperate guys: “You're still too small.”

But Spomenko insisted: if he is not allowed to fight, he wants to help the soldiers. The boy loved horses. The ability to handle them has proven very useful. Having procured a cart, he drove the fighters to advanced food and water. In this case, it was often necessary to overcome dangers, to come under fire. Once, during one such departure, the boy, along with a cart and horses, got into a mined area. One of the horses ran for a mine. Thundered explosion. Spomenko was injured. (Moreover, it was already his second injury).

Serbian photographer Tomislav Peternek arrived at the position that day. Seeing there a young soldier, he decided to take a picture of him. "You will now go down in history," the fighters joked at the boy. He answered: What the hell is the story for me? The main thing is, I survived today. ”

Several times a teenager tried to offer options for evacuation. He said one thing: "I am not a deserter." Once, Spomenko became the hero of a television report. This story was seen by a Serb Predrag Simikich-Pegan, who lived in France. He was excited about the idea of ​​adopting a boy.

Especially from Paris, this man came under Ozren with a humanitarian mission. There he found Spomenko and offered to go with him to France. The boy was very touched by such kindness. And he said that he, in principle, agreed, but only after the war. “I will not leave the village and will not leave my comrades,” he added.

In March, 1993, during the battle for the city of Ozren, Spomenko remained to defend his village Yovichi. Once Muslims shelled this town. Five soldiers of the Bosnian Serb army were killed, and Spomenko was mortally wounded. 20 March his short life is interrupted. He was awarded the Medal of Merit for the People. Posthumously. “Our Bukhko Bukh died”, - the soldiers spoke of him bitterly, recalling another young hero who fought during the Second World War.

Spomenko is buried in the cemetery in Jovičy. After the war, Bosnia, as you know, was divided into two parts - the Muslim-Croat and the Serb. The village of Jovići was under the control of Bosnian Muslims. Moreover, there is a real nest of Wahhabis there.

In 2011, the leader of the Military Organization of the Republika Srpska, Pantelia Churguz, set out to rescue Spomenko’s remains and reburial in the territory subject to the Serbs. But this failed to do so. 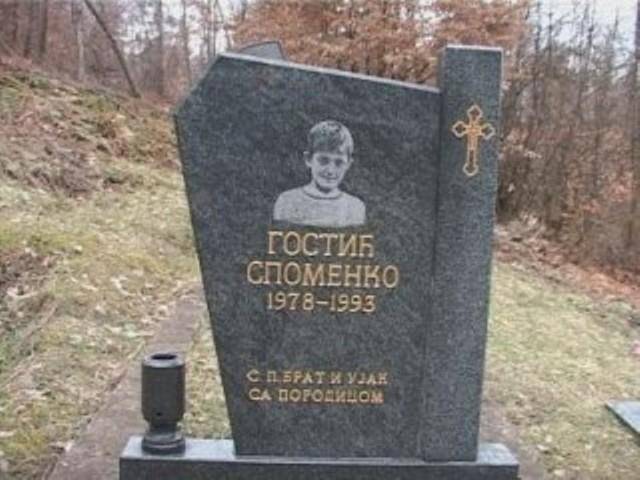 In the 2014 year, on the 21 anniversary of the death of the boy, a monument was unveiled in his native Doboj (which is located in the Republika Srpska). And in 2016, one of the streets in the Serbian city of Visegrad was named after him. In addition, in Voronezh, the public organization Russian-Serbian Dialogue proposed to name one of the streets in honor of Spomenko Gosticha.

About the young fighter in his homeland composed song. Recently, Serbian director Mile Savich, with the support of the authorities of the Republika Srpska, made a documentary about him “Spomenko on eternal guard,” which was shown, among other things, in Russia.
Spomenko on the eternal guard

Ctrl Enter
Noticed oshЫbku Highlight text and press. Ctrl + Enter
We are
Reports from the militia of New Russia for 27-28 September 2014 of the yearResults of the week. "Well, do not change me because of every idiot!"
Military Reviewin Yandex News
Military Reviewin Google News
37 comments
Information
Dear reader, to leave comments on the publication, you must sign in.