March 22 2018
32
Not so long ago, I had to hear the phrase of a foreign historian and political scientist who is related to France, that, say, you, the Russians, have an irresistible craving for renaming. It was expressed at the end of January, when St. Petersburg "celebrated" (it is possible without quotation marks) another anniversary from the date of the renaming of Petrograd to Leningrad. Like, you, the people of Russia, just give me a reason - they are immediately ready to change the name: from the alley to the whole country.


On the one hand, the person, it seems, is right. Indeed, there is a tendency to rename us - depending on the political system, the mood of the elites or the attitudes of the elites, at the moment current, to the elites, at that time previous. First, the streets and cities in honor of the kings, then to the base, and then ... lanes, squares and settlements - in honor of party comrades, then again, "return line", but not brought to the end. Therefore, some pearls such as the Order of Lenin's institute named after the emperor Nicholas II remained for some time ... In July last year, the name was changed.

On the other hand, the thought immediately arose, and who is talking about the “Russian burden” of changing signboards? Excuse me, didn’t you infect the Great French Revolution? .. Didn’t the “freedom-loving” French people become the collective subject who so actively began to get rid of the “hated monarchism” not only by the method of guillotine, but by the change of names - and literally everything and everything.

It was decided that the names of kings, queens and saints are outlived and cannot “stain” the new French history. New time dictated new names. True, the heroes of the new time were typed in a little, therefore they often had to repeat themselves.

The Paris sections begin, almost every day, to contact the Executive Council with requests to rename their streets, communes, cities. And the Executive Council warmly welcomes the initiative “from below”. Thus, the street of St. Anne, on which the philosopher Claude Helvetius was born, gets his name. The Street of the Daughters of God, which was a haven, as they say now, women with reduced social responsibility, turns into a street of Virtue. Themselves "lowered" a new likeness of law enforcement agencies in the face of virtually complete anarchy is trying to put the right path, but it does not always work. Someone takes the "spirit of revolution", someone moves to the next street and - for the old ...

Forges of Good News appear in Paris. Villages receive “demonarchized” and “desacralized” names: Rocks of Freedom, Mother Svobodnaya (instead of the Mother of God), Svobodny Dol, Free Valley, villages of Voltaire, Marat, Rousseau. And the villages and neighborhoods of Voltaire and Marat became so much that even the residents themselves were confused.

But the change of place names seemed small. The players decided that it was useless to use cards or chess pieces, where the word "King" is. Thus, the Jacobin Guiton de Morvo, who voted for the execution of Louis XVI, proposed his own version of the chess reform. He proposed the king to be renamed the Banner (the Banner of the French Revolution), and the queen the adjutant. According to de Morvo, a game in which it is necessary to protect the king will be strange in a revolutionary country. "Therefore we will defend the Banner of our revolution on the chessboard as well." According to de Morvo, even pawns were to be renamed, as this is a derogatory name. And the new name for the pawns was picked up quickly - arrows.

In the playing cards also carried out a "reform".
Of course, one of the “renaming peaks” was the change of the calendar. By decree of the National Convention in the whole of France, 5 of October 1793 was introduced a new, revolutionary calendar. The convention decided to keep track of the years since the proclamation of the republic - from September 22 1792.

The new calendar also had 12 months, but in each month there were 30 days. The old month names, associated with the names of the Roman emperors and mythology, were replaced by new ones that reflect the phenomena of nature. The seven-day week was abolished, a new unit of time was introduced instead - a decade consisting of 10 days. The month was divided into 3 for decades, and each of its last days was a day off.

By the way, decades have firmly entered not only calendar matters, but also purely mathematical things that have survived to this day - for example, the decimal metric system. True, with the division of the right angle not by 90, but by 100 degrees, it was clearly overdone, which led to numerous difficulties in geometric studies. As a result, returned to 90.

To match the length of the calendar year with the duration of the sun, it was necessary to add 5 at the end of each simple year and 6 days for a leap year. The entire period from 17 to 22 September was named after the insurgent people "sankyulotidami" and declared non-working, each of his days was devoted to a special holiday: Day of Valor, Day of Talent, Day of Labor, Day of Opinions, Day of Awards, Day of Revolution.

The inventor of this calendar was a mathematician Charles-Gilbert Romm, who himself said that his work was aimed primarily at de-christizing the life of the country.

It is particularly noteworthy that the "freedom-loving" French as easily abandoned this calendar as they accepted. And then, by the way, they reintroduced that the Paris Commune, with its first dictatorship of the proletariat in history, had to “lean” on something.

So there is a craving for renaming, it seems to be in the genes of humanity. Even in ancient Egypt, arranged his total renaming of the pharaoh reformer Akhenaten. True, later his own name was tried to wipe out “grateful descendants” from history. Somehow, archaeologists "discovered" the fact that those same "grateful descendants" did not have time to break it.

Today is, of course, Ukraine. 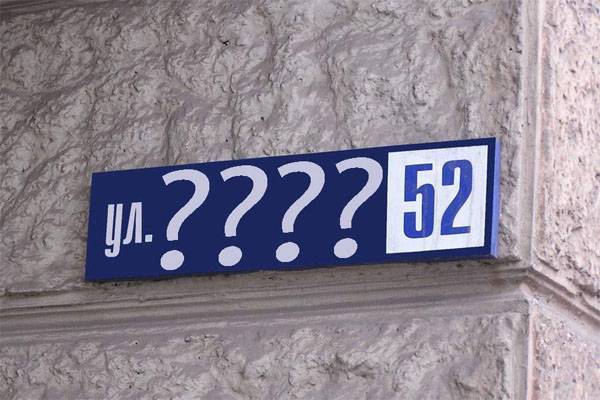 There are few heroes altogether, but because the monuments to Lenin have been brought down, and they cannot decide who to supply in exchange, for Bandera is not always everywhere in Ukraine. Decommunization, sort of like, held, but the soul requires more. Maybe they will get to chess, because they are played in Russia too ...

Ctrl Enter
Noticed oshЫbku Highlight text and press. Ctrl + Enter
We are
Results of the week. “In our cooperative, the board is always agreed”Syria: Americans scare themselves, and Asma Asad buys chairs
Military Reviewin Yandex News
Military Reviewin Google News
32 comments
Information
Dear reader, to leave comments on the publication, you must sign in.