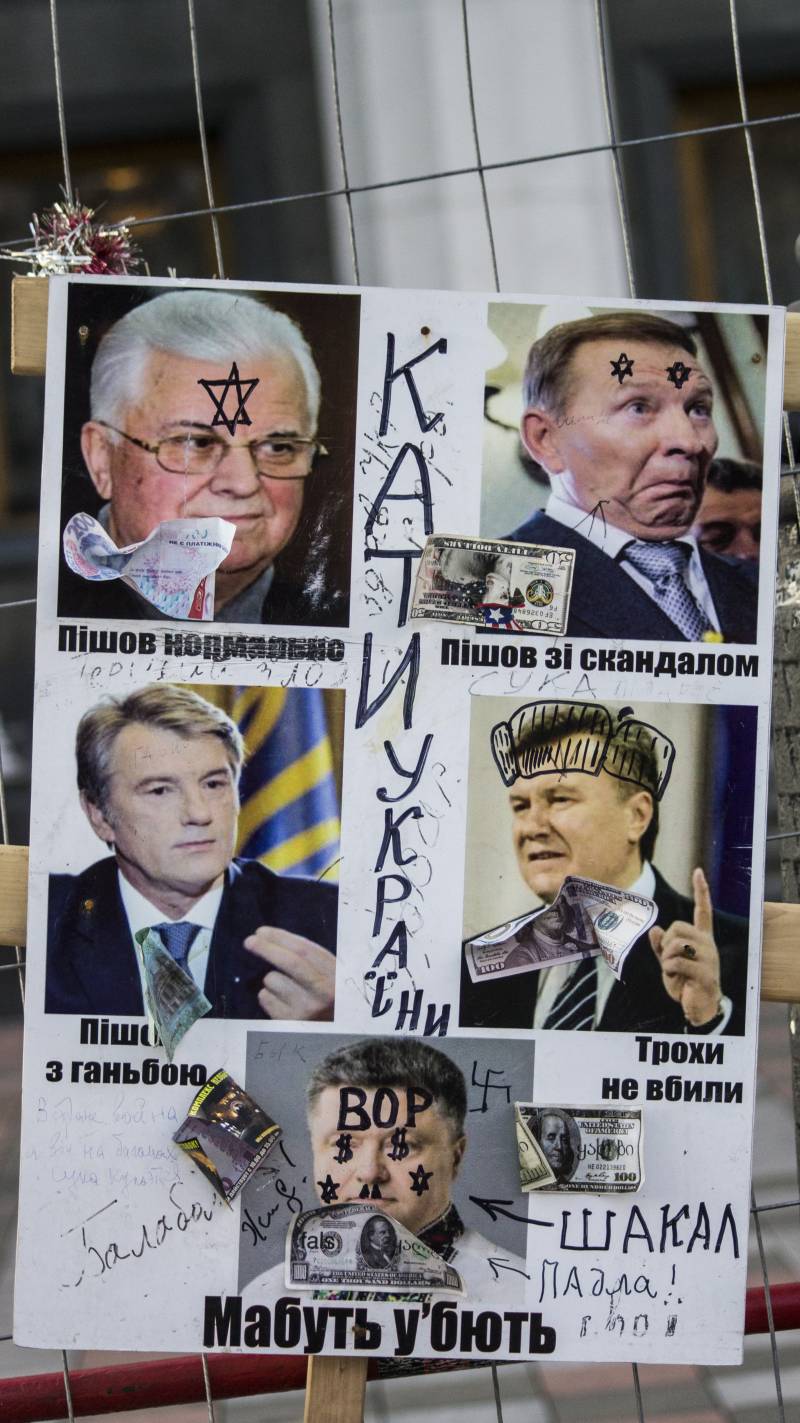 "Deadly tired" by News from Ukraine, we advise you to immediately pass by. Information about how tired you are, of course, is very important to us, but, nevertheless, in the future we will consider such moans as a flood with all the consequences.

For everyone else who understands what is happening around and looks at the environment not only on the 1 channel and REN-TV, we continue.

And today, despite the funny headline, it will be a matter of far from fun.

We can say that the pre-election race started in Ukraine. More precisely, a certain show of survival, where there will be only one left. President of Ukraine.

We translate: the president of a country that, unfortunately (sincere) takes the honorable third place in the number of hemorrhoidal colic for Russia. And, unfortunately, is not, again, at least an adequate neighbor. It is inconvenient to recall the former brotherly republic.

And nevertheless, we will talk about what is happening and in every possible way analyze it. Given that one of us to the border with this awkward formation of some 150 kilometers.

Experienced readers know that we are serious about the topic of Ukraine. And this is caused not only by personal attachment to this country, but also by the fact that today Ukraine resembles a rural warehouse of fuel and lubricants, where the men organized Friday gatherings.

Everyone understands that it can take off, but I really want to smoke after the next "weave" ...

The fact that today is called the political situation or the balance of power for the Ukrainians is still a dark forest. But even in a dark forest there are glades and pieces of a bright sky.

But the bell struck. It is difficult to say how it happened. But suddenly, everyone quickly began to understand the situation of “what is there tomorrow?” And “so for whom?”

Perhaps the Russian elections have acted.

So far, the Ukrainians themselves will not be able to sensibly explain their own desires and preferences. At least, in personal conversations and disputes, even well-known and competent political scientists cannot give an exact answer.

But, nevertheless, the process has begun. Yes, already today some of the actions of the top political beau monde of our southern neighbor clearly show that the active phase of the election campaign has begun there.

If you do not dig deeply, then it’s quite difficult to imagine the future of Ukraine. And the future depends largely on who will be at the helm of the ship "Ukraine" after Poroshenko. Or, as an option, today seriously (!) Is considered ... Poroshenko's second term!

Some of the readers now thought: what, to the demon, the election? Poroshenko still a year to rule and rule. Elections will be held only 31 March 2019 of the year. So what campaign can we talk about today? Quite logical reasoning. True, without taking into account Ukrainian specifics.

If you open the Internet pages of Ukrainian politicians, then read almost every second thought about the conduct of early elections. Parliamentary elections and presidential elections.

Moreover, such thoughts are present in the opposition and politicians from Poroshenko’s pool.

Indeed, the situation in the country today strains not only ordinary Ukrainians, but also those who have money, and, therefore, real power. The problem of Donbass, due to the promise of a quick solution to which Poroshenko won the elections, has not yet been resolved.

Domestic reforms, about which Kiev politicians speak, led to the destruction of the comfortable environment that existed just recently. Industry and virtually the entire economy is in a state of hysteria.

Foreign policy, perhaps, with the exception of obtaining tourist visa-free, has led to a sharp restriction of the countries-friends. More precisely, turning friends into lenders. There is practically no sphere of life left, where obvious negative changes would not be observed.

The boiler is gradually boiling ...

At our disposal were the results of several sociological surveys that were conducted in Ukraine in general and in Kiev in particular in the near future.

Poll this weekend. The survey is serious. Conducted with a wide coverage of all segments of the population. And the number of respondents is about several tens of thousands of people. Who "leaked info" is clear: those who collected it. With details.

Just say, you can trust the numbers, control was hoo, and polls were conducted in cities exclusively in person, on the streets. This is not the VTsIOM RF by telephone. A student is, we all know, a funny organism. We were lucky to make acquaintances with several, and even working for different offices. It is possible to compare the numbers.

We will constantly return to the discarded pack of copies of the results. Today, the focus will be on a survey that was conducted last weekend in Ukraine.

In the course of his interviewee was asked only one question: for whom would you vote if the elections were tomorrow?

As you can see, the question is posed specifically. And the answers, of course, specific. The results of the February survey of Ukrainians by Rating agency are as follows:

In March, the picture changes somewhat:

According to the results of the work of the “Rating” employees who interviewed about 4 thousands of Kiev residents this weekend, the situation is as follows:

This is despite the fact that Kiev has an unusually large number of undecided (24%) and decided not to go to the polls (16%).

Kiev International Institute of Sociology did not stand aside and also conducted its survey in Kiev. It was interviewed a little less, about two thousand of Kiev, and, apparently, were interviewed by some other method. The data is too different.

But the deputy Savchenko, as you see, is not. A well-conducted operation to discredit her gave results. As there are no heads of the Ministry of Internal Affairs and the Security Service of Ukraine.

Tymoshenko today for Ukrainians associated with domaydannoy life. Many believe in its ability to return the country to its former, more or less steadily growing state. Therefore, leadership is understandable here.

But a group of pursuers perfectly shows discord in society. Probably it is worthwhile to disassemble each of the applicants who really have the opportunity to compete.

The fact is that behind the same Lyashko, Boyko, Rabinovich and Gritsenko are strong parties by today's standards. And, accordingly, future places in the Rada.

The fight will be serious.

And we should not turn away from her and wrinkle her noses. Yes, yes, we, and not to someone else, will get the smelly (or not) results of both elections in Ukraine.

It should be understood that there, in contrast to Russia, there is a choice, and a lot depends on it. For example, how the war with LDNR will continue. How many more migrants will arrive in Russia to ensure a better life for themselves. How many dirty tricks and so on.

And here it is important who will be the helmsman of this barge. Who will be allowed, and who will be removed.

But in any case, the process has begun. Spiders in the bank begin to hunt each other. On the one hand, it will be quite funny. Spiders eating each other are, albeit an amateur, but informative and adrenalinistic.

On the other hand, the bank has a bunch of participants in the events. Ordinary people. Embittered with poverty, hopelessness and lack of perspective. At least some.

Accustomed to blood and death at the front. Often well armed.

These are a pity. But alas, science today has not learned yet to replace the diseased brain with a healthy one. And the brain of a huge part of Ukrainian society is really not healthy.

However, dear readers, tired of Ukraine, we still have to live and live with this country. So to be continued.

Ctrl Enter
Noticed oshЫbku Highlight text and press. Ctrl + Enter
We are
Reports from the militia of New Russia for 27-28 September 2014 of the yearResults of the week. "Well, do not change me because of every idiot!"
Military Reviewin Yandex News
Military Reviewin Google News
67 comments
Information
Dear reader, to leave comments on the publication, you must sign in.