Portraits of the century. Anatoly Lyapidevsky. To the 110 anniversary 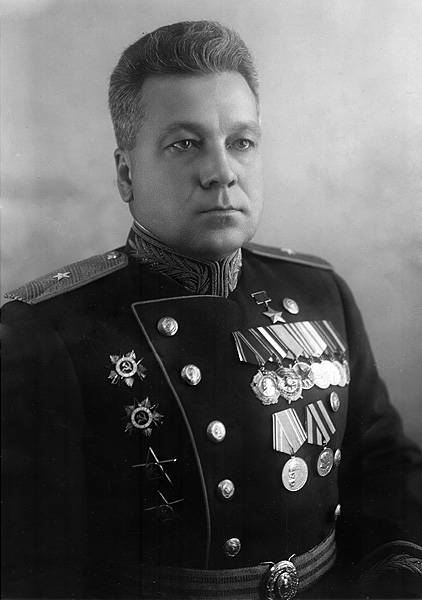 Of course, calling Anatoly Lyapidevsky the first Hero of the Soviet Union is somewhat wrong. Still, the feat was a collective one, and it’s definitely not worth reckoning who did more.

They were the first, and that's enough.

And our hero, who lived a very interesting life, is one of the "magnificent seven".

110 anniversary of the birth of Anatoly Vasilyevich Lyapidevskogo dedicated.

Anatoly Lyapidevsky was born 10 (23) in March 1908, in the village of Belaya Glina, in the Stavropol province (now the Krasnodar Territory), in the family of a priest.

He spent his childhood in Yeisk. The guy was attracted to the technology, because in his youth he willingly worked as an assistant in the forge, apprentice mechanic, mechanic mower, assistant driver at the oil mill.

But the real passion of Anatolia was the sea ...

When in 1926 Lyapidevsky was called up for service in the Red Army, he wanted to enter the naval school. However, "non-proletarian origin" put an end to a career in the military navy.

We will never know the name of the one who advised the frustrated guy to go to the pilot school. But this man had to say a big “thank you”.

In 1927, Lyapidevsky graduated from the Leningrad military theoretical school of the Air Force, and in 1928, the Sevastopol school of sea pilots. 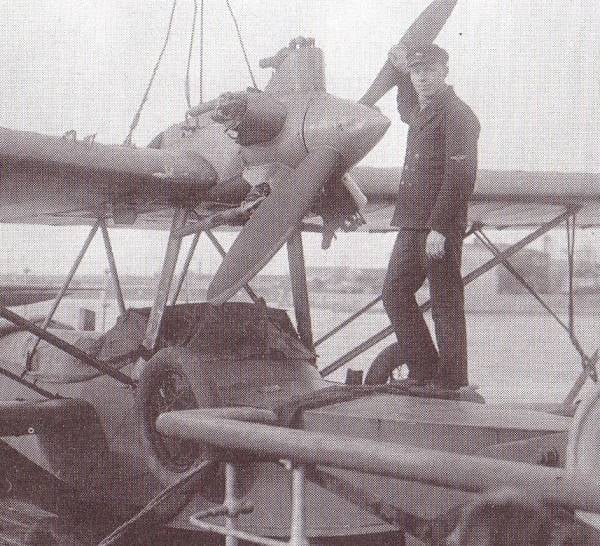 He served in the Air Force of the Red Banner Baltic Fleet, then he was transferred to the position of an instructor pilot at the later famous Eiisk School of Naval Pilots.

In 1933, Anatoly Lyapidevsky was sent to the reserve. He left the army in the Civil Air Fleet and asked for one of the most difficult lines - Sakhalin, in the Chukotka detachment of the Polar Administration aviation Glavsevmorputi.

He flew from Khabarovsk through the Tatarsky Strait to Aleksandrovsk. This route is very difficult, but having mastered it, Lyapidevsky, whose soul clearly demanded a feat, was transferred to the Far North.

What is flying in our North, and even in those years, only those who fly can tell. We simply state the fact that Lyapidevsky flew and flew well.

When the 1934 crashed with the Chelyuskin ship, Lyapidevsky was one of those who were thrown into search. And this is the best characteristic of the skills of both Lyapidevsky himself and his crew.

Could. Were able to. Flew.

And here the words “One is not a warrior” would be the best motto. Especially when the field is icy or snowy in the North.

It is now all travelers and tourists have GPS or GLONASS and rescuers clearly know where to fly. And then there are difficulties and difficulties.

And in the 30 of the last century ... The crew of Lyapidevsky knew about where they needed to go. 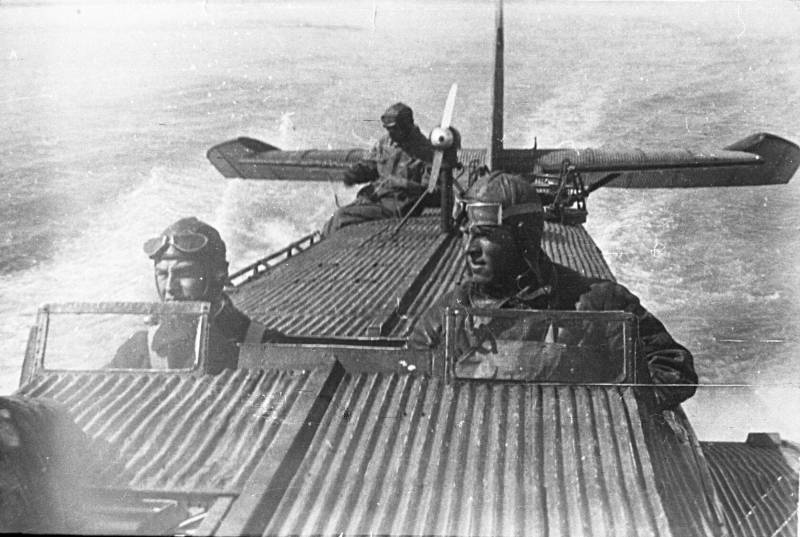 The picture is not the crew of Lyapidevsky, but everyone flew on ANT-4.

29 flights were unsuccessful. And only on the 30 time, March 5 1934, they found Chelyuskinites.

“We tried twenty nine times to break through snowstorms and fogs in the most difficult conditions of the Arctic, and all were unsuccessful ... They flew out, took a course, and returned each time - the elements raged, the frost reached minus 40 degrees, and then we flew without glass caps over a cabin and even without goggles, just a deerskin face was wrapped around and left small slits for the eyes. But nothing saved me from the cold. In the end, on 30-th flight, I discovered this camp.

The sun, silence, but a terrible frost - 40-45 degrees ... We peered up to the pain in our eyes. And finally, they directly "rested" in the Schmidt camp. The first camp saw Lev Vasilyevich Petrov, our navigator, showed me with a finger: “Tolya, look! ..” 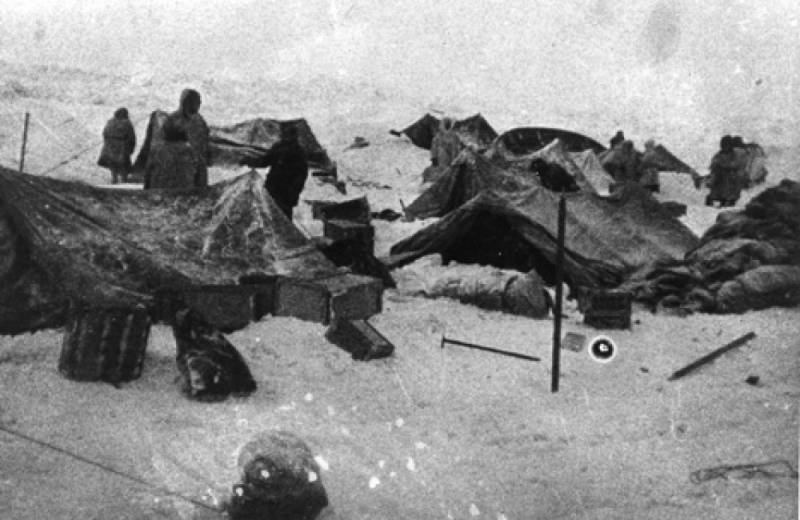 I decided to sit down. I landed once, differently, but for a big heavy car the ground was very small, only 400 on 150 meters. I miss - hit the ice, slip through - fall into the water. He made two circles and sat on the ice floe at the minimum speed. When he got out, everyone around shouted, hugged, climbed to kiss. And I have one thought in my head: hell, how can I fly up from here ?!

They consulted with Otto Yulievich Schmidt and decided to immediately take with them ten women and two girls ... The plane was big, heavy ... they shoved, figuratively speaking, into large, heavy Malici women and children, and they had to lie to someone then sit, much shrinking. "
(From the memoirs of A. V. Lyapidevsky.)

After the first flight to the ice floe, Lyapidevsky repeatedly flew from Whélen to the Chelyuskin camp, but because of the weather could not get through to it. 15.03.1934, he had to deliver fuel to Vankarem.

The flight ended in an accident: the crankshaft of one of the engines broke.

However, not on those ran. With the help of local residents, whom Lyapidevsky and the crew literally fell on their heads for their own happiness, the crew reached Vankarem. On dogs.

In Vankarem were workshops, which made everything necessary for the repair of broken skis. Plus crankshaft for the engine. The aircraft was repaired and returned to the base under its own power.

Forty-two days in the icy desert.

A. Lyapidevsky made 30 search flights, finding their camp, landed on an ice floe and took out a 12 man - ten women and two children.

For courage and heroism shown in saving the Chelyuskites, Anatoly Vasilyevich Lyapidevsky on April 20 of April 1934 was awarded the title Hero of the Soviet Union with the award of the Order of Lenin (No. 515). 4 November 1939 of the year, while presenting the Gold Star medals, he was awarded the medal number 1.

According to Lyapidevsky there was no separate decree, but since he was listed first in the list, they began to consider him a hero number XXUMX. When the Golden Star was established in August 1, he received the Medal No. XXUMX. 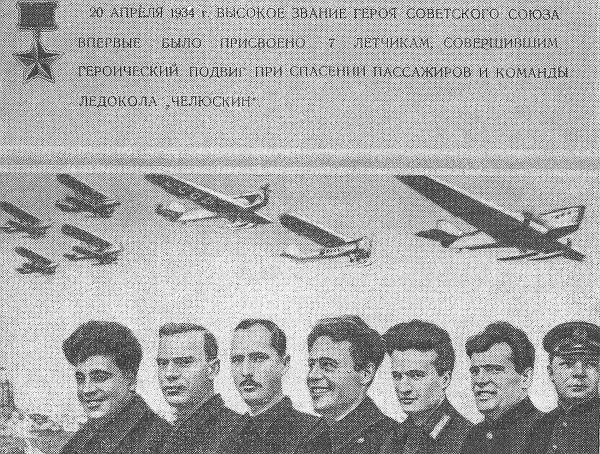 The country began the cult of the seven polar pilots, and with them - the research of the North.

Did it spoil the heroes? Not those times, not those ... And the people, in general, too, are different. 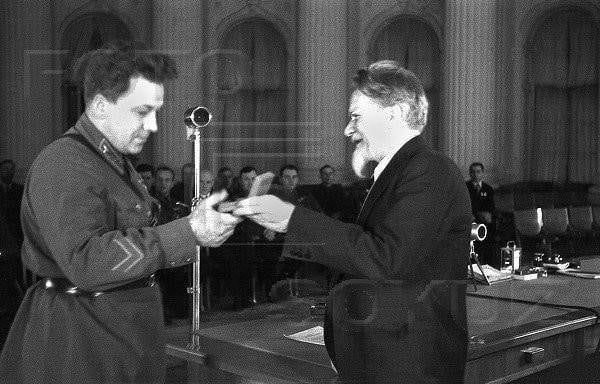 In 1934, in Moscow, the expedition participants had a solemn meeting with the leaders of the Soviet state. At the reception in the St. George Hall, Stalin himself approached Lyapidevsky. Lyapidevsky on 100% used the situation, asking Stalin to give him the opportunity to continue his studies.

A few days later, on the report of Lyapidevsky on admission to the Zhukovsky Air Force Engineering Academy, Voroshilov, the people's commissar of defense of the USSR, put on his famous resolution: “Test the knowledge of Comrade. Lyapidevsky: if prepared, accept, if not prepared, prepare and accept. ”

For the Academy Lyapidevsky was prepared. 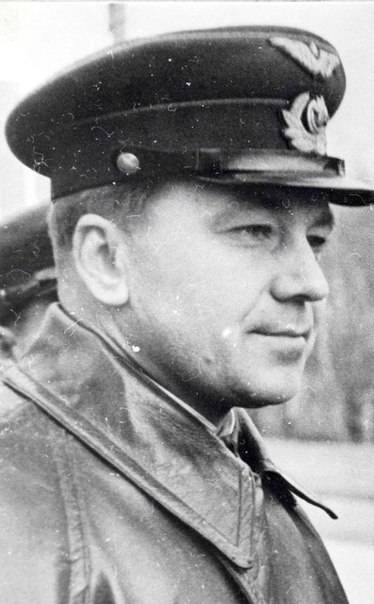 Voroshilov took full patronage over the polar pilots. In the 1938 year, on the 20 anniversary of the Red Army, the pilots wanted to be given the rank of major (they were mostly captains, only Kamanin major). Voroshilov personally wrote on the submissions to the title: "CROWNERS!".

In 1939, Col. Lyapidevsky graduated from the Air Force Academy of the Red Army named. Zhukovsky and was appointed deputy chief of the Chief Inspectorate of the People's Commissariat of the aviation industry. Then he moved to TsAGI - Central Aero-Hydrodynamic Institute, where he worked as head of the 8-th department (department of operation, flight tests and fine-tuning).

But the real work was ahead.

In 1940, Lyapidevsky was appointed Director of Aviation Plant No. XXUMX in Moscow.

Director of the plant and met the beginning of the war, Colonel Lyapidevsky.

4 July 1941, the People's Commissariat for the aviation industry issued an order organizing an aviation plant in the city of Omsk. Away from the front line. The plant was created on the basis of the Moscow Experimental Design Plant No. 156 and the Tushino Production Plant No. 81.

The first director of the new plant in Omsk, July 18 1941, was appointed A.V. Lyapidevsky. Subsequently, plant number XXUMX will be ONPO "Flight".

Drainage of the marshes, clearing the territory, erection of the plant buildings on it in wartime conditions (and therefore, shortages of literally everything) became a test for the director. The main thing is that in Omsk at that time there were simply not as many working hands and equipment as was required for an urgent (otherwise under war conditions) launch of the plant.

Even the NKVD with the GULAG could not solve the problems. There were already so many workers in the camps.

From mid-October 1941, the aircraft plant number 166 went into normal production mode, in the assembly shop from parts and assemblies made in Moscow, began to assemble the first front-line bomber Tu-2.

And Lyapidevsky rushed to the front ...

In May, 1942 was transferred from Omsk to Moscow Region as the head of the test department of the Air Force Scientific Research Institute. Nevertheless, in September 1942, Lyapidevsky was appointed deputy commander of the Air Force of the 19 Army for the rear.

In December 1942 - September 1943, Colonel Lyapidevsky served as the head of the field repair department of the 7 Air Army (Karelian Front).

He participated in the defense of the Arctic. On his shoulders lay the care of the hundreds of cars returning from the battlefield, and what is the repair of equipment in the conditions of the Arctic Polar field airfields - only those who served there themselves can understand this.

In 1946, A. V. Lyapidevsky was given the rank of Major General and was appointed chief controller of the USSR Ministry of State Control. 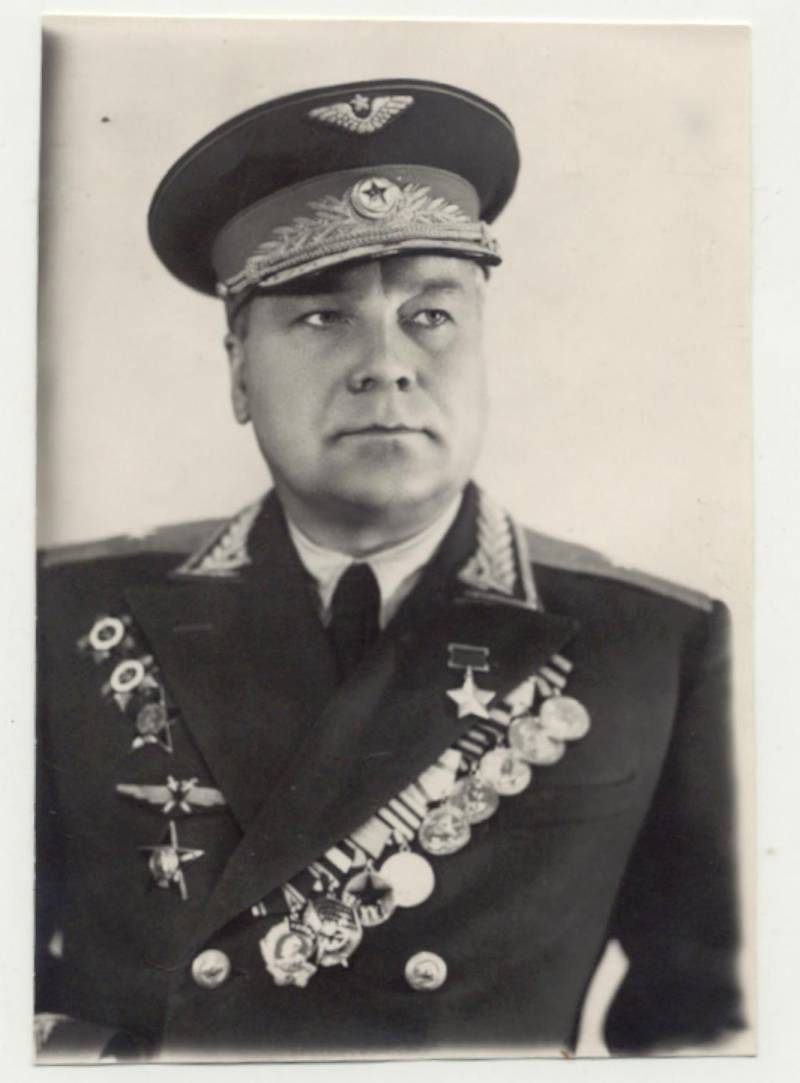 In 1949, A.V. Lyapidevsky was appointed by order of Stalin himself to the top-secret KB-25 (now the All-Russian Research Institute of Automatics), where a group of automatics for hydrogen bombs was developed by a group of nuclear physicists led by I. Tamm and A. D. Sakharov .

So by 1954, the pilot-hero became director again. And until 1961, Lyapidevsky worked as the director of this most experienced plant, KB-25.

In 1961, an event occurred that once again dramatically changed the fate of Lyapidevsky.

During the tests of the most powerful 50 megaton hydrogen bomb over Novaya Zemlya in the world, Lyapidevsky, like all members of a government commission, received a severe dose of radiation. 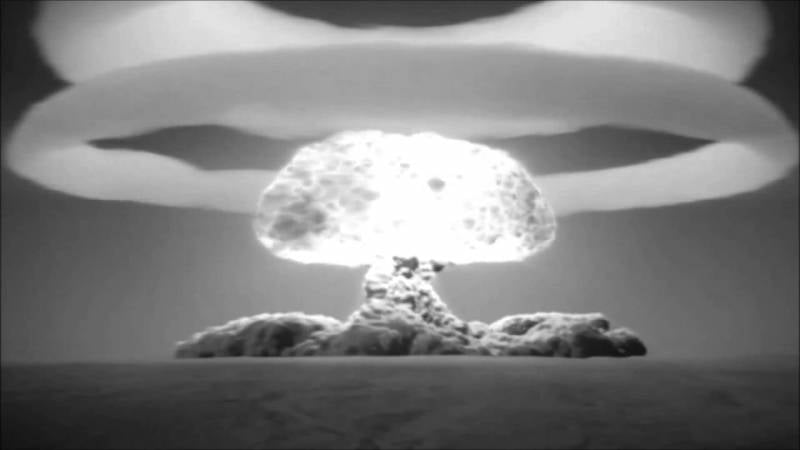 For this reason, in the same year 1961 Lyapidevsky retired for health reasons.

But when I healed, I realized that just sitting and dying from leukemia just like that is not an interesting thing. However, years and greatly shaky health did not assume that Lyapidevsky would be able to fully work.

Glory to the circumstances that again in the life of Anatoly Vasilyevich there was a man who considered the same.

He completed his career as Anatoly Vasilyevich as deputy chief engineer for capital construction. And led an active social life. 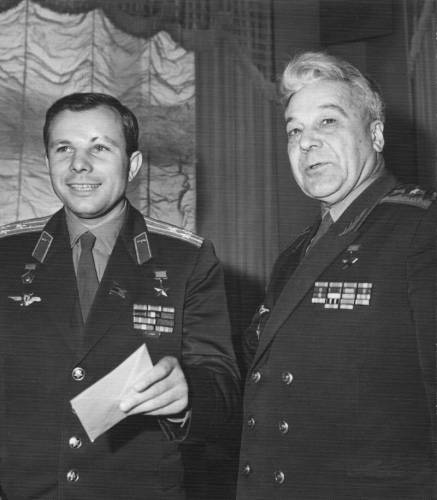 Major General Lyapidevsky 29 of April 1983 of the year died, having caught a cold at a funeral, which he simply could not attend.

29 December 1982 was buried by Vasily Sergeyevich Molokov, who was one of his first flight instructors and a comrade to rescue the “Chelyuskinites”.

Unfortunately, for Anatoly Vasilyevich’s sick and weakened leukemia organism, this cold became fatal. For several months he fought the disease, but ... his age took its toll.

And the first Hero of the USSR died the last of that “magnificent seven”. 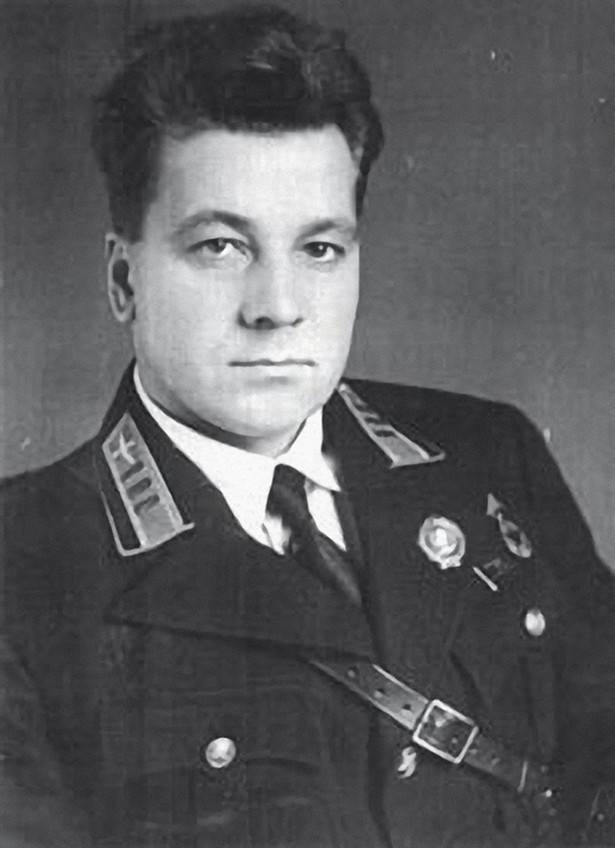 Eternal memory and eternal gratitude for everything: for the Chelyuskites rescued, for hundreds of combat aircraft and sorties, for MiGs, for the Tsar Bomb.