The Royal Air Force has 137 single and double Eurofighter Typhoon fighters (22 two-seater, the first series of which, the so-called Tranche-1, will be scrapped in the near future for financial reasons in order to continue production of the last Tranche) , 15 new F-35B Lightning-2 (joint property with aviation Navy), 30 old GR.4 Tornado fighter-bombers (this type of interceptor has already been decommissioned, and even these will be decommissioned at the beginning of 2019). There have always been many problems with the Typhoons, for example, several years ago a defect in the design of the rear fuselage was revealed, forcing aircraft users in Britain, Germany and other countries to halve the number of flight hours for these aircraft to reduce the load on the fuselage. But Lightning-2, one might say in advance, will easily plug him into the belt for problems. In addition, this aircraft, with its appearance, dealt a heavy blow to the pocket of the Air Force, forcing it to decide that in a year only 6 combat squadrons will remain in the Air Force, including one on the F-35B. 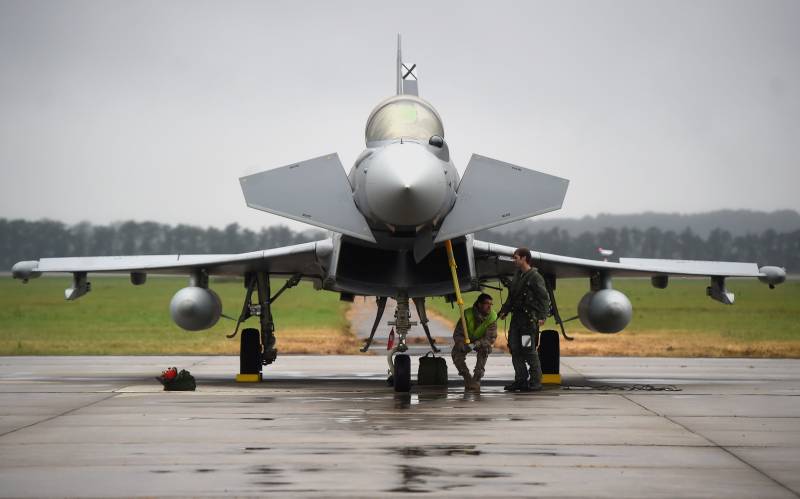 In addition, there are 56 Hawk training aircraft, in half the old version of T.1 and the new T.2 (T.1 is also in reserve). Also included are 6 E-3D AWACS aircraft and 3 RTR RC-135W aircraft. The transport “wing” consists of 18 military transport A-400Ms (with which there are a lot of problems) and 22 S-130Js (which, together with the chartered planes of various transport companies, carry the main cargo of transportation), as well as about a hundred different helicopters, mainly types of "Chinook" and "Puma." Serviceability of the fleet is also low, but in general, probably, it does not differ from the rest of the European "old" NATO countries. True, unlike Britain, a number of these countries have their own base patrol anti-submarine aircraft, while the British do not have them now. The old Nimrods have been dumped for a long time, the new Nimrod version has been slaughtered due to the high price, and now they are thinking of ordering 9 P-8A Poseidon from the overlord from overseas, and for 330 million. pounds overboard, at the price of a corvette in the West and a frigate - with us. But there is no money for this yet. So you have to beg the planes to use the Allies, and how then - Putin's hordes of landing submarines will soon land tank army in Dover, and how to reflect them?

"A distant line of stormy ships"

We can’t count on Britain’s “distant line of stormy ships covered by seas”, “ruling the seas” of Britain, it’s even worse than with aviation.

The naval forces of the Navy include X-VUMB-type Vanguard, 4 multi-purpose submarines - 6-new, such as Estujt and 3-old Trafalgar, which have been hard-lived for the last years. These submarines can shoot Tomahawk SLCMs, but only in non-nuclear equipment, like the Americans. There is simply no other for a long time, just as there are no charges for them.

"Estyut", despite a number of problems with this type, continue to build, recently on the wave of "reflection of Russian aggression" found the money to build the seventh boat, but it will be very soon. The structure of the surface ships recently introduced with pomp the first of two aircraft carriers, such as the Queen Elizabeth, the first aircraft carrier of the aircraft for many decades to be normal, rather than “pocket” under the vertical, airplanes with a short or vertical takeoff. In addition, the royal fleet even lived for a number of years, even without a “pocket” aircraft carrier, and the ocean-going helicopter carrier was the flagship. "Queen Elizabeth", nicknamed "Big Lizzy", although put into operation purely formally, has already burned through a huge hole in the budget, along with its sistership, which is in the process of completion. In fact, Britain found itself in the role of those underdeveloped countries, about which British gentlemen in the era of the zenith relics of the British Empire joked that let us, they say, give them a battleship and destroy them. To bring the "Lisa" to mind, the British write off the former flagship "Ocean" - it is already buying Brazil. And after him go either for sale, or to the "Coast of the Dead" in India, for cutting, and 2 airborne helicopter-docking ship "Albion" and "Bulvark" are good ships, in the ranks more than 10 years after stayed. But for them in Britain there are still heavy battles in the press, parliament and the Internet, and their fate has not yet been completely decided. Maybe the British will sell them to us at a reasonable price? And then from the USC we still get the first "Priboi". But no, they will not sell - they will hang. Yes, and now we ourselves will not buy.

Also in the 6 formation, the 45 Deering, 13 of the Duke 23 frigates and various minesweepers, patrol boats and others. The Dearingi, in general, is also not a masterpiece of shipbuilding, has a rather problematic SAM, weak percussion weapons (or it is not at all on the part of the buildings) and in general is largely the fruit of the desire to save.

But the British press, for all its problems fleet, loves to write about Russian, inventing fables about him.

Remember though the recent campaign of the CAG with "Admiral Kuznetsov" and "Peter the Great" - there was enough panicking in the style of "Putin's sea fist is going to seize Aleppo" and ridicule the "rusty ships" (first look at them) and over "smoking like a battleship on the corner of the "aircraft carrier, although they themselves, the Big Lizzy" with the new gas turbines smokes periodically a little worse. Although in this hysterical British media stoked irritation with the fact that in the Russian aircraft carrier and heavy cruiser a quarter of the tonnage of the royal fleet will fit in, and even Peter himself is capable of at least halving the “Lord of the Seas” with the Granites. But there was no particular need for this either, because the Duncan destroyer accompanying our CAG simply broke down, unable to withstand the struggle with calm in the English Channel.

Schizophrenia from the high stands

But not only island media, but also the authorities are very generous with “creatives” in relation to Russia. Recall from a recent report, for example, of Sir Peach (Air Marshal, Head of Defense Headquarters) that the Russian Navy would certainly leave the British without the Internet and telephone service, cutting off fiber-optic lines with its atomic deep-sea stations GUGI and underwater vehicles. And another sir, Williamson (Minister of Defense), said that Russia was going to cut the electric lines and gas pipes connecting the islands with the continent. Russia, of course, can really do all this, and no one on the planet has more opportunities for a deep-water war than the GUGI. But not in a peaceful time! It can be seen, the British just remember how they themselves cut telegraph cables from the German Empire to the then peaceful and neutral USA during the First World War, in order to force the Germans to broadcast messages, and the Britons had ciphers. Ended this история “telegram Zimmerman”, which was the last argument for the entry of the USA into the war. In general, a thief usually fears that he may be robbed.

Williamson believes that "Russia can take actions unacceptable for any other country"! Does it say a figure from a country that invented a wonderful way to kill tens of thousands of civilians in concentration camps, testing it on drills and using its most 20 centuries in colonies? Britons practiced concentration camps after the First World War in Palestine, and after the Second World War in Kenya, driving local hundreds of thousands into them, and not only there. The Germans were only their diligent students who were able to circumvent the teachers. Also among the British "exploits" are the slave trade of their own subjects, talking about the Irish - nowhere else, even in the Middle Ages, white Christians did not turn white co-religionists into slaves on plantations - for this there were negros. You can find other "unacceptable actions". In 1982 during the Falklands (Malvinas) war, the British initially thought about the use of TNW against a non-nuclear country that had no nuclear allies and did not threaten the existence and independence of the kingdom. Yes, many British experience "unacceptable actions." So do not the British talk about them. But Russia is to blame anyway!

At the same time, however, part of the British military-political circles retains a partially adequate assessment of reality. The Armed Forces of the Russian Federation have capabilities that are not and are not foreseen by the British Armed Forces. For example, General Carter (Army Chief of Staff) said that there was nothing to counter the threat from the high-precision KR and BR, which showed themselves perfectly in Syria (this is his assessment). He also gave the highest marks to Russian artillery, air defense, electronic warfare and much more. Carter said that both the British army and the rest of the NATO armies had completely lost their competence in confronting a real high-tech army. And they also do not have opportunities, they say, having become accustomed to fighting with different insurgents. And I must say that he is completely right - let’s look at the British infantry on open, low-armored vehicles for rides in the desert, or at the MRAP, which are a special case of the development of armored personnel carriers, but they are even less suitable for general combat than armored personnel carriers. composition on dangerous front-line roads, and not for combat. It is clear that the general "cut the truth-womb" not just like that, but for the sake of financing, but you cannot refuse him in objectivity.

But at the same time, the British shabby lion for some reason continues to twitch the Russian bear ignoring him, by the ears. And the recent "villainous poisoning" of the traitor who has become unnecessary is just another episode in a long chain of events of this kind. Let us recall Litvinenko, Berezovsky’s suicide, and a number of other characters who, of course, deserve what they received, but whose deaths they tried to hang on Russia. True, there were no ultimatums before. At least, after the famous "Curzon ultimatum" nothing like this is remembered. Which, in general, was also sufficiently contrived. Only here in 1923g. the British Empire had both the strength and ability to confirm its ultimatum by forceful actions, especially with regard to "no" militarily at the time of the USSR. Therefore, partly the conditions of the "Curzon ultimatum" were fulfilled. And they simply simply dismissed the current one, as from the regular statements of the Ukrainian side on the topic of Crimea or Donbas. And the “powerful response” of Britain to the “failure to comply with the conditions of Tereza’s ultimatum” somehow did not impress either. Obviously, because in the depths of the soul and the comic troupe "Teresa and Boris" understand that there is a line beyond which they themselves will apply what they intimidate the people. Moreover, we have a long bill to the Anglo-Saxons to describe everything, the article is definitely not enough.

Ctrl Enter
Noticed oshЫbku Highlight text and press. Ctrl + Enter
We are
What does F-35 not like in Australia?Reduction and transformation of the European Armed Forces
Military Reviewin Yandex News
Military Reviewin Google News
77 comments
Information
Dear reader, to leave comments on the publication, you must sign in.