"Javelin" is half the problem. MMP - this is a new headache for the Russian defense industry 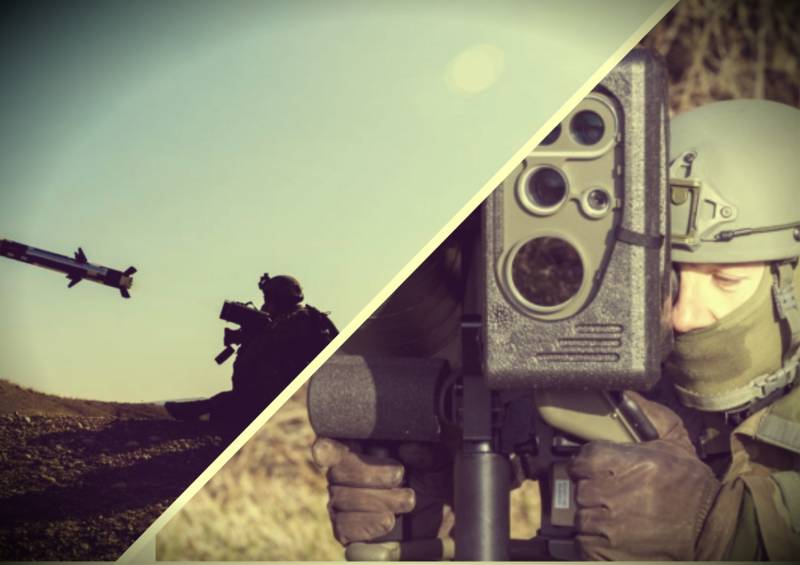 The provision to the Ukrainian side of a US package of gratuitous military aid worth more than 49 million led to a whole flurry of different visions of further changes in the tactical situation on the Donbass theater of war, which was constantly “warmed up” by military-political shakes. Absolutely nothing surprising in this squall of opinions there, because not a batch of outdated TOW-2A ATGM, but 36 ATGM of the 3 generation Javelin and 210 of anti-tank guided missiles FGM-148 to it will fall into the hands of the inadequate opinion. Some of our “experts” and patriotic bastards tend to either underestimate the tactical and technical characteristics and advantages of the Javelin complex on the battlefield, or even completely declare the complete absence of any positive tactical effect from the use of Darts in the Donbas theater of operations. In practice, everything will be completely different.

Even 4 — 5 launchers of the Javelin anti-tank complex and a couple of dozen FGM-148 missiles will be able to give the Ukrainian military formations a serious tactical advantage in the operational direction, the relief of which abounds in a large number of folds, closely spaced lowlands and elevations, and forest stands. Ukrainian operators of Javelinov, trained by Western specialists, will only have to wait until T-64BB or T-72А / АВ / Б 1 AK of the people's militia of the DPR, at least 25 — 35 seconds, will be in view of the combined television and thermal sight (PUF, - aiming launcher) and at a distance of no more than 2200 — 2500 m. After that, the operator will only need to point the 4 multiple of the daily and 9 multiple thermal sight on the detected tank, and then mark the target with a special marker cursor. During this process, the FGM-148 GPS will receive target designation from the PUF and “capture” the target, the operator will start and be able to instantly move to the shelter or change the firing position without being in the enemy’s optical-electronic field of view, which is controlled by a laser beam anti-tank 9М133-1 “Cornet-E” missiles belonging to the 2 generation.

Consequently, the Javelin operators should not be on the line of sight of the target (in open positions) during the march phase of the ATGM flight path to the target. “Competitions-M”, which are in service with the army corps of the LDNR, require it; Kornety-E will also be demanded (in case of their transfer to NM LDNR as military assistance). But if in the case of the 9М113М rocket of the Konkurs-M complex it is not so easy to calculate the position of the anti-tank player (thanks to the radio command control by wire), then with 9М133-1 "Cornet-E" the situation is somewhat more complicated: the emitter of the laser control channel is easily unmasked the position of the "Cornet" on the march of the flight. In the end, another unpleasant moment emerges: an intense backfire from rifle weapons and enemy BMP / BTR automatic guns in the direction of the Kornet complex operator can easily disrupt the process of semi-automatic guidance of the 9M133-1 missile to the target. Try to clearly keep the crosshair of the 1PN79M Metis-2 sight on the enemy tankwhen the M25 Bushmaster AP, or even the standard M242 120-mm tank gun with high-explosive shells, works for you.

As for the tight response fire according to the Javelin ATGM (if it can be detected immediately after the FGM-148 leaves the transport and “tube”), it will not affect the effectiveness of hitting the target, since the infrared missile allows the missile to act completely independently, regardless of the fate of the operator and the M98A2 launcher with a combined all-day sight. Based on the above, we make a final conclusion: “Javelins” are very formidable for the mechanized units of the LDNR People’s Militia weapons not only in urban areas, but also in the conditions of the steppe landscape zone characteristic of most of Donbass, and in particular for the Azov region. This zone is replete with both natural and artificial comfortable positions for deploying FGM-148 "Javelin". Moreover, in most parts of the contact line, the distance between the defense units of the LDNR military corps and the Ukrainian military formations that hold the defense is only 500 — 1000 m, which allows the Ukrainian Armed Forces to start using the Darts almost immediately, as the positions will be prepared already in advance. Significant disadvantages of the Javelin anti-tank missile system include:

- the need for 17 — 20-second cooling of the matrix infrared photodetector of the GOS based on the CdHgTe semiconductor solid solution for faster and more stable “capture” of targets that do not strongly contrast with the environment (under unfavorable circumstances this time may be quite enough to reveal the operator’s location by means of portable radar of artillery reconnaissance or optical-electronic means of the enemy);
- the impossibility of working on “cold” targets, the thermal “portrait” of which fully coincides with the thermal signature of the environment;
- the huge dependence of the effectiveness of the work of IKGSN on the meteorological situation in the theater of operations (fog, snowfall), as well as on such factors as the smoke and the use of aerosols by the enemy to prevent the spread of infrared radiation;
- the dependence of the GOS on the use of self-made "thermal caps", fixed on the sections of the MTO armored vehicles, including self-made thermal screens made of the inner layers of the carimat and the main dimension based on several dozen foil layers and dense cellophane;
- the lack of radio correction of the FGM-148 flight trajectory from the ATGM operator control terminal, as well as the impossibility of re-capturing a higher-priority ground target that was suddenly discovered by the shooter of the Javelin complex.

However, all of the above disadvantages do not negate the highest efficiency of the FGM-148 ATGM within the framework of the officially announced tactical and technical parameters (range 2500 m in the Block I modification and armor penetration of the order of 800 mm steel equivalent, when hitting the vulnerable upper projection of MBT or BIP); Moreover, neither the "Cape" nor the home-made means of reducing the infrared visibility of tanks in the armies of the Lugansk and Donetsk people's republics have been implemented. And the time is running out, exactly as the first installments of Javelin are already preparing to be sent to the “Square”. It is worth noting that in recent years, these complexes entered the armament of the Estonian army in the number of transport-launching “tubes” with the CPN M80A98 and 2 ATGM FGM-350 Block 148 / I, and are also planned to be adopted by the Georgian army in the number of 0 installations and 72 rockets.

Given that the majority of our MBT T-72B3 and T-80, which are part of the 1 Guards Tank Army, are still not equipped with KAZ Arena, the picture is very unruly, requiring very quick response. After all, even if we take into account the ability of the Pantsir-C1 anti-aircraft missile and artillery systems to intercept the JG-148 “Javelin” slow-fired anti-tank guided missile systems (the 400 flight speed is 450 km / h), it would be extremely illogical to constantly use anti-aircraft weapons for these purposes. There are all chances to “crush” much more serious and dangerous objects threatening tank units on the march, for example, 227-mm guided missiles M30 / XM30 GMLRS / GUMLRS included in the RSRS MLRS and HIMARS nomenclature.

In recent days, the more advanced MMP anti-tank missile system (Missile Moyenne Portee, the Medium-Range Missile), developed by the French division of MBDA with 2009, on its own initiative, and then, with 2011, under the program to replace obsolete anti-tank systems of the MILAN family. The active phase of the MMP project was launched in 2013, which was supported by financial support from the French Defense Ministry, whose specialists were able to look at the MBDA proposal at times more advanced alternative to the 76 purchased by the Javelin ATGM system in 2010, and there was something to see. Indeed, the developer’s plans were to design not only the standard ATGM in the MMT version (the range of 4000 m, 1,6 times more than the Javelins), but also the more long-range version of the MHT, capable of hitting enemy targets at a distance of 8000 — 10000 m, which comparable to the Israeli Spike-ER (NT-Dandy). And such a model is capable of satisfying the demands of the French army in the network-centric wars of the 21st century and participating in very ambitious and promising tenders announced by the same India. The movement in this direction is already being observed: representatives of the Indian Armed Forces began negotiations with MBDA on the possible supply of the MMP complex back in early February of the year 2014.

We are now more interested in not the export potential of the advanced French ATGM, but the volume of orders from the domestic consumer - the French Armed Forces and the technical features of the MMP and MHT versions that will be opposed to the Russian Armed Forces in the European theater of operations. On the first point, everything is very expected: 20 launchers and 50 ATGM systems in the MMP modification (the first batch delivered to the troops in 2017) reached operational operational readiness. By the 25th year, this amount should be 400 and 1750 units. accordingly, what the western news and the military-analytical publication www.armyrecognition.com on March 19, 2018. Even later - about 2850 missiles in two versions, as indicated in the original contract. The figures are very impressive, especially after the observed degree of “sagging” of the French elite under the imperial diplomatic and military-political “hops” of London and Washington in relation to the Skripal case and the preparation of an attack on Syria. Obviously, in the event of large-scale military events, this product will be used against us to the full.

The most important technical advantage of the MMP / MHP before the “Javelin” can be considered a dual-band uncooled infrared-television homing head, which does not need preliminary 17-second cooling of the matrix receiver. As a result, the gunner-operator can launch the rocket instantly after receiving target designation from third-party sources or the direction finding of the object by means of an optical-electronic sighting system mounted on a tripod with a “tube” -PU. In the first case (when receiving targeting from third-party sources), the ATGM can be launched from a closed firing position (“Javelin” is not capable of this). At the same time, the MBDA decided to return to the classical scheme of command guidance and correction of the MMP flight path over the fiber optic wire.

This conductor sends a video stream from the TV module of the GPS to the sighting device located outside the line of sight with the aim of the arrow operator, which will allow you to track the battlefield with virtually “rocket eyes”. Thanks to the two-way channel of information and command exchange, the shooter-operator can adjust the flight of the MMP until it hits the target; It can also fly around targets for damage to the least protected side projection (NLOS mode, “Non Line of Sight”). Also, there is an inaccessible for “FGM-148” mode of “retargeting” (“Man-in-the-Loop”), and, of course, the “fired-forgotten” mode using an infrared channel. It is noteworthy that the use of a fiber-optic channel in the NLOS mode virtually eliminates the possibility of targeting two-way communication of critical interference to the line, up to the failure of the task. Our only countermeasure remains the speedy adoption by the army air defense of high-frequency EMI generators of the “Ranets-E” type (or newer analogues), “burning out” the MMP / MHP missile-guided avionics of the airborne electromagnetic beam, laser complexes capable of disabling the dual-channel GOS, and All this in conjunction with the classic complexes of active protection.