March 21 2018
126
After his election victory, Russian President Vladimir Putin, as you know, met with former rivals. We talked "for life" and, first of all, about the further political processes in the country, that now it is necessary to consolidate efforts so that the country really began to actively develop. 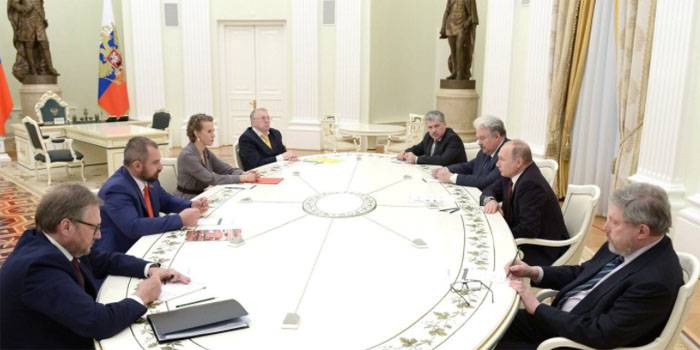 One of the newsmakers (after the meeting) was Vladimir Zhirinovsky, who took third place with about 5,6% of votes. Coming out after a conversation with the president to journalists, the ex-candidate from the Liberal Democratic Party announced that he had brought to the attention of Vladimir Putin an opinion on the future system of government.

According to Zhirinovsky, the form of government can be changed from “individual” to “collegial” (“collective”). The leader of the Liberal Democratic Party believes that such a collegial body of government could be the State Council (Supreme State Council of Russia - UGSR), which would not only determine the external and internal policies of the Russian Federation, but also “elect” for a certain term the president. At the same time, the president elected inside the WGRGR would have a lower level of authority than the current president, and at the same time the authority of the parliament would increase. Here it should be noted that the speech is not about the State Council, which is already in place in Russia.

Zhirinovsky noted that “then the presidential elections in Russia would not be necessary,” referring to the option with a popular vote.

Opinions on the evaluation of the statement Zhirinovsky, as usual, were divided. One group of citizens took Zhirinovsky’s words about strengthening the role of parliament and at the same time narrowing the scope of presidential powers, either as pure populism or as unnatural for such a huge country as Russia, a proposal. Another group of Russians saw in the initiative of Zhirinovsky a reasonable grain, believing that the stake should not be made in the country for one single person for the simple reason that in a certain plan it is risky.

The problem is that stories the countries were periods of absolute power of one person (dynastic monarchy), and a collegial format of government (Politburo of the Central Committee of the CPSU). At the same time, the effectiveness of state administration most often depended on a particular person. As it is known, it happened that even during the de jure absolute monarchy the monarch ruled, as they wished, “collegialists”. And it also happened that the collegial body was something pseudo-collegial and amorphous, and then one person pressed the body and its initiatives for themselves. Therefore, the question is what is called an open and actively discussed.

In the meantime, the topic of collegiality or strict individuality in power is discussed, there are related issues. For example, the question of the hypothetical composition of the Supreme State Council. If the VSGR (as an assumption) can be created, then by what principle will it be formed: only smart, only beautiful or smart and beautiful? In fact, the irony here is superfluous ... Indeed, in those countries where their collective management format (at least on paper) exists, there is a developed party system. Why are there party ... Most often - one-party.

As an example, the People’s Republic of China, where the National People’s Congress and other collegial bodies are the flesh of the Communist Party of China. One can argue here, noting that China’s NPC is “only” on 72,2% and consists of CPC members. 830 people in the NPC are not members of the country's Communist Party, but are part of the so-called Patriotic united front of the Chinese people. However, this very united front is controlled by the CPC, the working department of the united front of the Central Committee of the Chinese Communist Party. In general, decisions are made de facto in the lap of one party, which determines the direction vector. Vaughn, the other day they voted for the indefinite presidency, having changed the constitutional clause - and everyone, almost one and a half billion, is happy, everyone is happy. Maybe there are dissenters, but in China their activity is reduced to kitchen gatherings, and therefore the Chinese "Marsh" is not expected. Where did she come from, especially before the 20 anniversary of the events on Tiananmen ...

You can, of course, argue long about what our current multi-party system differs from the Chinese one-party system with the presence of consistent opposition parliamentary factions, but still ... Maybe, indeed, nothing special is different ... How, by the way and the American system, where the largest parties, it seems, are two, but these two parties, despite the media war with each other, resemble the two halves of one whole (although why they “remind” it is, in principle, it is). That is why party taxiing in the USA looks not much different from the format of the Chinese NPC.

So, we have our own “all the same” ... There is a single speech in parliament, but with lobbying of interests in relation to individual representatives of the elites, this single speech stops, especially when it comes to the implementation of the plans and adopted laws. Accept - accepted, and execute ... One - necessarily, the other - not with the hand, for a special caste.

Therefore, it is possible to introduce at least the Supreme State Council, at least recall the "tandem" (someone else remembers? ..), even to restore the monarchy, only hardly something fundamentally will change if you do not answer the question: what goal does the state specifically seek ? This goal should be transparent and understandable, as should the list of those responsible for if this goal suddenly continues to be only on paper. It is precisely the responsibility that must first be developed on the scale of the entire bureaucratic apparatus. And how difficult it is, and no need to say. Who will take responsibility when there is always the opportunity to change his shoes in the air and call himself "the politically persecuted victim of the regime" ...

Ctrl Enter
Noticed oshЫbku Highlight text and press. Ctrl + Enter
We are
Situational analysis of the death of the MH17 flight (Malaysian Boeing 777), made on the basis of engineering analysis from 15.08.2014Results of the week. “Take off your hats! Expose the head! The body will be taken out now! ”
Military Reviewin Yandex News
Military Reviewin Google News
126 comments
Information
Dear reader, to leave comments on the publication, you must sign in.