March 24 2018
107
Saxon diplomat Georg Gelbig, who was on business in St. Petersburg at the court of Catherine II, in 1787, together with the empress went on a journey to the distant Crimea. Upon his return, he anonymously wrote an article in the German magazine Minerva, in which he reported that the villages he had seen on his way were supposedly only painted on boards. These painted villages were built by Prince Potyomkin. Since then, the stable expression “Potemkin villages” has been formed in the sense of pretense, fraud. But really, Catherine and the persons accompanying her were so stupid that they did not notice the deception? 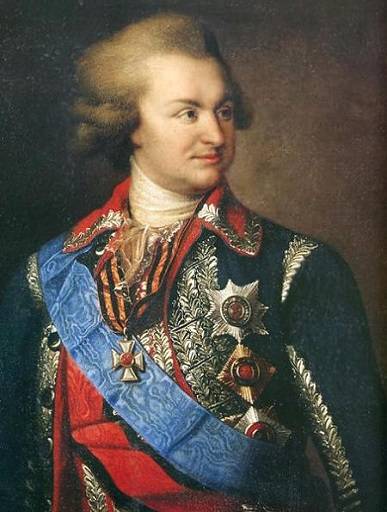 Saxon diplomat did not like Russia. He did not like to live in her, her customs and practices. He was not at all delighted at the rapprochement of Russia with the West and was annoyed that this peasant country managed to defeat Turkey in a short time, conquered vast territories in the south, went to the sea and managed to build a military fleet there. Uneducated power could threaten an enlightened Europe. And who is Potemkin? Yes, he is none other than the "prince of darkness", embezzler, bribe taker, a liar who created the scenery on the path of the imperial carriages.

In the article, Gelbig also wrote that, according to his observations, during the trip the empress of the inhabitants of one village and their cattle were driven to another in order to show those who were driving that the villages were inhabited, the inhabitants had meat, milk, and livelihood. Gelbig launched the myth of "Potemkin Villages" into international circulation. And this myth from its submission began to be treated as a reality. In the pamphlet “Potemkin Tavrichesky”, which was published later, in Russian translation its name “Pansalvin-Prince of Darkness”, Gelbig painted his impressions, which later caused great discontent in Russia.

In fact, everything was completely wrong. The empress and her favorite Prince Grigory Potemkin planned a trip to Crimea in 1780 year. Catherine really wanted to see new lands, especially Little Russia, Tavrida, Crimea. She dreamed of seeing the Black Sea, cypress trees, breathing the air of oleanders. Prince Potemkin talked about the beautiful warm climate, about the abundant fruit trees, fruits and berries. He shared his extensive plans for the transformation of this region, the construction of new cities, settlements, fortresses from the raids of the Turks. Catherine II agreed with him, allocated funds, and Potemkin set to work. He was an irrepressible person, clutching at many things, not everything worked out as he wanted, but still he managed to build several cities that were developing according to plan and were filled with visitors.

In 1785, Count Kirill Razumovsky, the last Ukrainian hetman, went south. He visited Kherson, founded by Potemkin in 1778, examined the fortress and shipyard, then visited the military fortification (the future city of Nikolaev), also founded by Potemkin in 1784, which was to become a powerful Russian naval and shipbuilding base fleet. He also visited Yekaterinoslavl on the Dnieper. This city, according to the plan of the empress, was to become the third capital of the Russian Empire. Razumovsky noted that these cities surprise with their "lepustroystvo".

In the place of the former desert, villages appeared every 20-30 version. Potyomkin, catching the desire of his lady, tried to make Yekaterinoslav not just a provincial city, but similar to the metropolitan metropolis. He planned to build a university there, to build a conservatory, to establish the work of a dozen factories. He agitated people to go there, to explore new lands. And people rode and mastered.

At the end of 1786, Catherine expressed, finally, the wish to go on a trip in the summer of next year. Potyomkin had to hurry. He wanted to impress the Empress with various accomplishments in the south. He gave a lot of strength to strengthen the Black Sea Fleet. Created a settlement-strengthening for the Russian army. The military and service people went to the places, new settlements, villages were created.

In the autumn of 1786, Potemkin developed an approximate travel route: from Petersburg to Smolensk, from him to Chernigov and Kiev, then Ekaterinoslav, Kherson, Bakhchisarai, Sevastopol, Sudak, Feodosiya, Mariupol, Taganrog, Azov, Belgorod, Kursk, Orel, Tula, Moscow and further to St. Petersburg. The total distance is approximately 5657 versts (about 6000 kilometers), including 446 versts by water, including along the Dnieper. At the same time, the prince ordered the regiments of the Russian army to settle in the places of the travel route of the empress and invited guests, thereby ensuring the safety of the movement of the imperial expedition and having soldiers in the field to perform separate preparatory work. Only near Kiev was the army concentrated under the command of P.A. Rumyantsev number 100 thousands. 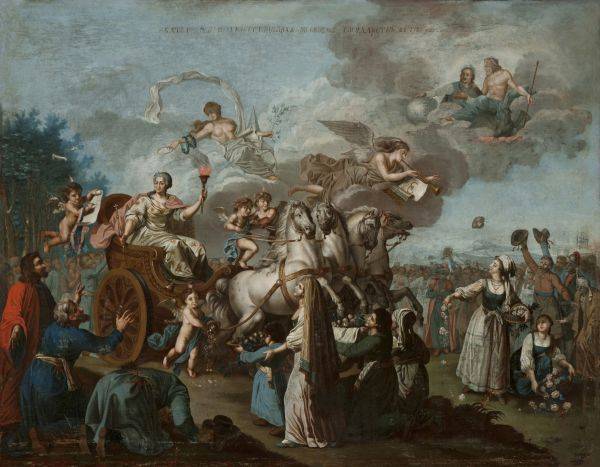 2 January 1787 from St. Petersburg moved the "imperial train": 14 carriages drawn by many horses, 124 sledges with tents and 40 spare sleds, 3 thousands of people. Tall cossacks drove ahead, the horse guards accompanied the “train”. The empress herself was sitting in a carriage designed for 12 people, which were pulled by 40 horses. Among her distinguished foreign guests was the incognito Austrian Emperor Joseph II, a personal friend of the Russian Empress and her ally. There was also a Saxon diplomat Georg Gelbig.

As we approached south, small villages began to appear along the road, well-dressed peasants, and a number of peaceful cattle. Potemkin certainly tried. He showed dignitaries only the best, so he drove in advance along the entire route. He ordered me to repair the houses, paint the facades, decorate with garlands, and change the peasants in a new board. And he asked everyone to smile and wave their handkerchiefs. But there were no cheap prints on the way. 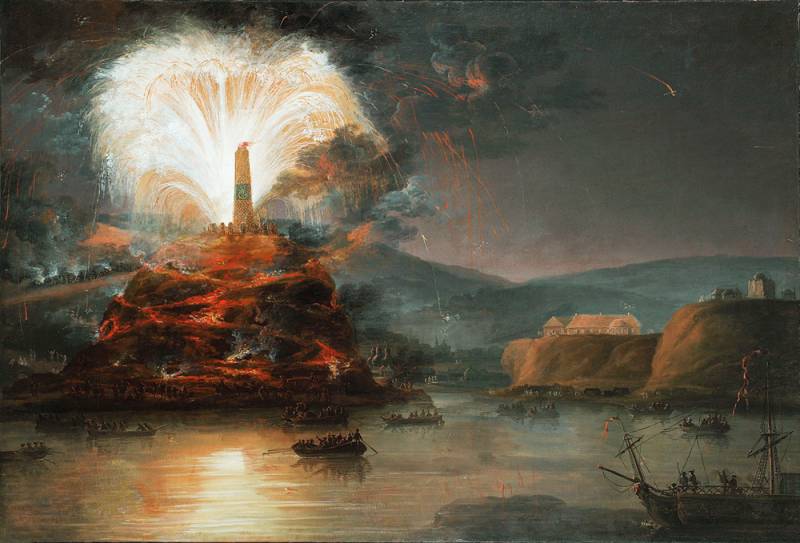 Fireworks in honor of Catherine II during her trip to the Crimea. Unknown artist. Kon XVIII century.

The “imperial train” reached Crimea at the very end of May. Especially for his arrival in the Old Crimea was built a small palace. Catherine and the persons accompanying her were met by the Tauride Regiment, who saluted her and bowed his standards to her. The whole evening played the trumpet, beat the timpani. After the salute and music, the empress was invited to drink tea in a special pavilion built in oriental style with a fountain. The Austrian emperor could not contain his emotions at the sight of such innovations: "Lord orders slaves perform- he said enviously. - Catherine can spend as much as you wish. We are beggars! Neither in Germany nor in France, no one can afford what is being done here by the Russians ... "

Joseph reflected the secret mood of many European monarchs, who envied Russia, which managed to acquire such important territories, thereby increasing its power and political weight. Especially Catherine and her guests were amazed by the view of the harbor city of Kherson, where the vineyards were blooming, you could taste grape wine. Even more admired Sevastopol, in the bay of which was located the sailing squadron-15 of large and 20 small ships. It was clear evidence that Potemkin was concerned about the development of the navy, really took up the transformation of the region. 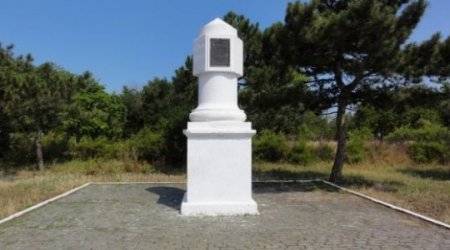 Catherine's Mile on the northern side of Sevastopol

Catherine Miles Monuments stories and architecture, road signs built in 1784-1787. on the intended route of the Empress Catherine the Great.

After inspecting the Crimea, many diplomats went to their homes to talk about what they had seen. Prince Potemkin drove the Empress to Kharkov, where he had to part with her. At parting, the empress thanked him for what he had done and awarded him the title of "Prince of Tauride."

Catherine arrived in St. Petersburg 11 July 1787 of the year. In total, she traveled 6,5 for a month. None of the foreign guests accompanying the Russian Empress expressed his displeasure. Everyone was interested in questions: would the empress want to share such an abundance of land and does she need an influx of labor from the West?

Catherine wanted a lot and planned a lot, but the political situation unexpectedly changed, alas, not for the better. Turkey, more precisely the Ottoman Empire, its rulers, absolutely did not like this arrangement of Russia in the south. The rulers of Turkey were eager to regain their lands, which were ceded to Russia after the Russian-Turkish war of the 1768-1774, including the Crimea.

And it was here that the Austrian emperor Joseph II recalled the former hospitality of Catherine and took her side. Potemkin assumed the role of commander. That same year, 1787 had to gather troops, now to repel the enemy, to expel him from the territories conquered with such difficulty.

The war ended in 1792 with the victory of Russia and the conclusion of the Yassy peace. A significant role in the victory was played by new villages and cities created by Potemkin: Kherson, Nikolaev, Sevastopol, Yekaterinoslav. 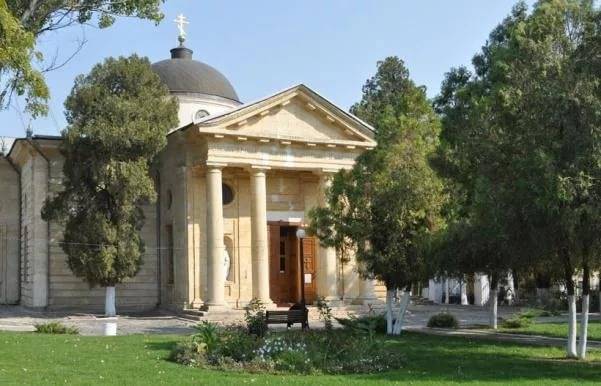 Catherine's Cathedral in Kherson, founded by Potyomkin, where he is buried

One of the most important achievements of Grigory Potemkin is the creation of a military fleet on the Black Sea, which was originally built in a hurry, from actually poor and even useless material, but it provided invaluable services in the Russian-Turkish war. In addition, Potemkin rationalized and the form of soldiers and officers. For example, he eradicated fashion for pigtails, boules and powder, put in the form of light and thin boots.

Grigory Alexandrovich also developed and introduced in the infantry troops a clear structure of units, which made it possible to significantly increase the maneuverability, speed of operations, accuracy of single fire. Potemkin was loved by ordinary soldiers, as he advocated the humanity of the attitude of officers to subordinates.

For example, the supply and sanitary standards for the rank and file improved, and for the use of soldiers in private work, which was almost the norm, the perpetrators were subjected to the strictest, often public, punishment. Thus, thanks to Grigory Potyomkin, at least a relative order began to be induced in the Russian army.

Based on:
https://24smi.org/celebrity/3091-grigorii-potiomkin.html.
https://russiapedia.rt.com/of-russian-origin/potemkinskie-derevni.
One hundred great secrets of the world. M .: Veche, 2010.