Was there a “Newbie”?

March 20 2018
34
Strange история It happens with the use of the allegedly new Novyok Soviet chemical warfare agent in English Salisbury, from which the former GRU employee Skripal and his daughter suffered, by the way, next to the largest chemical laboratory in England in Porton Down. Speaking experts say that super-chemical weapons "Newbie" none of them have seen, in one classification it is not. But everything can be, and they put the "Newbie" on a par with the OB of the VX, which can, by analogy, be called the "Old Man", and Porton Down produced it. 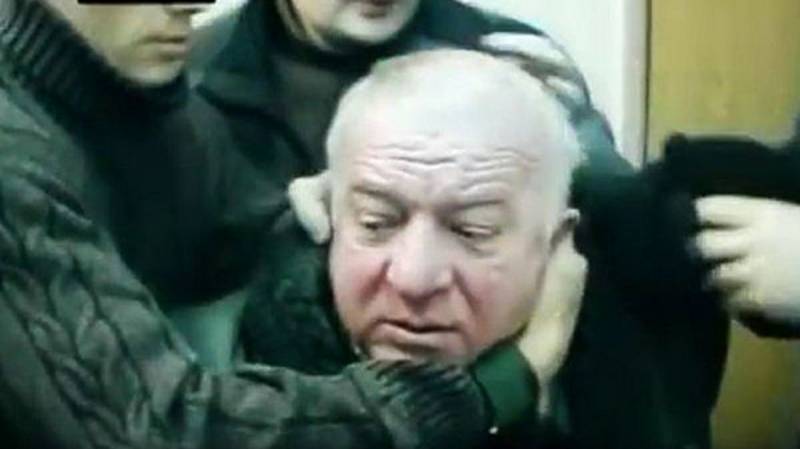 The British secret services somehow managed to identify that it was the “Novice” that was used in Salisbury, apparently with the help of Porton Down laboratory, but they refuse to provide evidence, do not allow Russia to investigate the materials, but place all responsibility on Russia, up to President Putin. Only the other day, the OPCW experts seemed to have been admitted to the body of the poisoned Fiddle.

Other oddities around Novice’s political order. At first, Russia, through the mouth of Sergei Lavrov, categorically rejected all the accusations of Prime Minister Theresa May and the head of the English Foreign Ministry, Boris Johnson, and insisted on the presentation of evidence and the admission of Russian experts to the investigation in accordance with the OPCW Convention. There was an exchange of expulsions of diplomats from both sides.

Further, the position of Russia began to tighten. Foreign Ministry spokeswoman Maria Zakharova categorically denies that the Novice public watchdog was ever produced not only in Russia, but also in the USSR. And it translates the arrows to the western countries, where, possibly, they tried to synthesize chemical agents under the Russian name “Novice”. Among the possible Western manufacturers "Novich" mentioned the United States and England. Press Secretary Dmitry Peskov also speaks out with a tough stance: "London will have to confirm its accusations, or apologize."

Vladimir Putin uncompromisingly put it: “If it were a military AE, people would have died on the spot. We have no such means. ”

The position of London becomes uncertain. The irreconcilable detractor and prosecutor of Russia Boris Johnson speaks of the readiness to allow Russia to investigate the Skripl case. And then he makes a very strange statement: “That Russia says that it has never produced a“ Novice ”, has destroyed it, or something has been exported to Western countries, even to England”. Boris mixed different things into one pile, so he turned out to be such an abracadabra, and he did it, it seems, deliberately. Russia said it had destroyed its chemical weapons, under the control of the OPCW, but there was no “Novice” in it, which Boris Johnson forgets.

The source of information about the combat newcomer "Novice" in the West was a defector chemist Wil Mirzoyanov, warmed by the United States as an eminent chemist. The name Wil is an abbreviation for Vladimir Ilyich Lenin, this is not the end of the oddities of this scientist chemist, but just the beginning. In 1995, Wil received an international passport and officially went abroad, and the Commission at the Foreign Ministry did not want to release a scientist who had to do with military secrets. The decisive word turned out to be behind the then head of the FSB, Sergey Kovalyov: “What kind of secrets Mirzoyanov is?” Kovalyov meant that Russia had already joined the Convention on the Prohibition of Chemical Weapons.

In the US, Mirzoyanov makes reports on the “Novice” super chemical weapon created in the USSR, an incredible lethality, speaks with a great article in the NYT, then writes a book that reveals the “Novice” chemical formula. Now any qualified chemical laboratory in the West could try to synthesize their "Novice". Thanks to the tremendous negligence of ex-head of the FSB Sergei Kovalev. It seems that this was what Maria Zakharova had in mind when she mentioned Western countries that can develop their “Novice”.

The problem of Western chemists was that Mirzoyanov was an analyst chemist and had never dealt with a practical synthesis of organic matter. According to Mirzoyanov, these technologies remained in the USSR, and the only evidence of the existence of the Novice was its precursor formulas, published in the book.

Here you need to turn to an interesting article by a certain blogger Andrey Lazarchuk on Facebook from 16 in March, which attracted the attention of many lovers of conspiracy. Lazarchuk, without opening his sources, said the following.

At the same time, the KGB of the USSR conducts a massive operation to identify channels of leakage of scientific information to the West, dozens of fake, but detailed chemical super-weapon projects of the NOVA series are being prepared. The project “Novice” passes through Mirzoyanova, very soon the KGB discovers its leakage, but continues to supply Mirzoyanova with disinformation on the “Novice” combatant. This is impossible to verify, but in 1995, the head of the FSB, Sergey Kovalyov, really releases Mirzoyanova to the United States. This fact is reported by Mirzoyanov himself in his interviews.

Thus, it is possible that Novice is not a combat agent, but a cipher of the operation of the KGB of the USSR, with the help of which the secret service checked the scientist’s chemical environment for leaks, and delivered misinformation overseas. Therefore, Sergei Kovalev contributed to leaving Mirzoyanova in the United States. But then what happened in Salisbury with Skripale and his daughter?

It seems that the "dead hand" of the KGB of the USSR from the other world got England, with Teresa May and Boris Johnson. Thanks to their efforts, the hoax of the “Novice” OB from the USSR managed to poison Skrypaley in Salisbury. Or does Porton Down Laboratory, which is adjacent to Salisbury, have Scripal poisoning? Where the real OB VX was produced.

NATO is now demanding that Russia disclose information on the Novice program. Imagine what will happen when Russia discovers that the “Novice” is a code of the operation of the USSR KGB for NATO! It seems that Sergey Lavrov meant this when he strictly said that “England will be responsible for misleading the world community”.

Ctrl Enter
Noticed oshЫbku Highlight text and press. Ctrl + Enter
We are
How to talk to liarsBitter thoughts of the West. Will Russians poison Donald Trump and Theresa May?
Military Reviewin Yandex News
Military Reviewin Google News
34 comments
Information
Dear reader, to leave comments on the publication, you must sign in.