After Afrin, Manbij, Raqqah and the eastern bank of the Euphrates

March 22 2018
26
The promise of the YPG field commanders (the Kurdish "people's self-defense detachments"), who surrendered Afrin without a fight, to arrange for the Turkish troops and the Islamist-controlled nightmares during the large-scale guerrilla warfare does not sound too convincing. 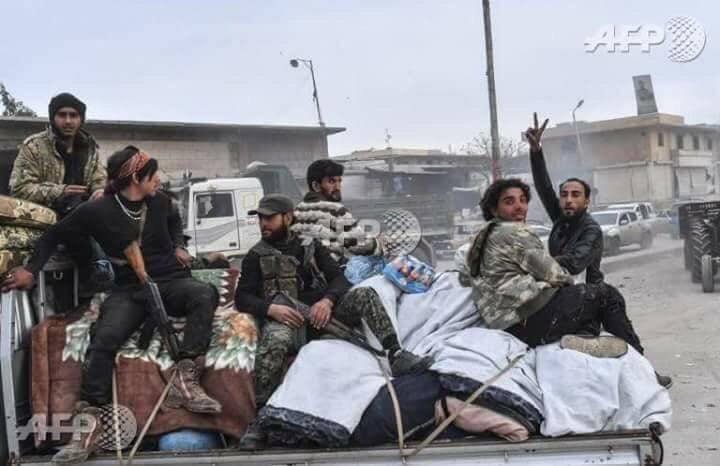 Recall that in March 18, the Turkish invaders and Islamists from the so-called “Syrian Free Army” occupied the city of Afrin, which was previously under YPG control, from resistance, from where it came before 150 000 civilians. The exodus of refugees was preceded by strikes on residential areas, entailing numerous casualties. Obviously, there was a deliberate fire "squeezing" of the population.

According to eyewitnesses, now in the city there is a mass looting and a real massacre. Militants of Islamist gangs who have taken the city are robbing, raping and killing the remaining residents. Turkish troops are not taking any steps to stop the crimes.

But back to the intentions of YPG to deploy a large-scale guerrilla war.

“We will bombard Turkish enemies and their mercenaries whenever possible. Our forces are represented throughout Africa. Our blows will be a constant nightmare for them. It will be a guerrilla war with horrendous consequences for the enemy, ”Reuters quotes one of the Kurdish warlords.

However, if YPG really intends to achieve “horrific consequences” for enemies, then urban fighting would be the best way to achieve such a goal.

Recall that the actions of small mobile militant groups of the IG (“Islamic State” is a terrorist organization banned in Russia) defending Raqqu and Mosul not only inflicted huge coalition losses, but also delayed the process of seizing these cities for long months.

Moreover, such results were achieved by relatively small forces and means. If the Kurds really would like to fight with the Turks and their allies “in an adult way”, then nothing better than urban conditions could be invented. There, assaults drawn into street battles at extremely short distances would lose their main advantage - artillery and aviation support

At the same time, partisan actions outside the city, in the rural areas of the enclave, are unlikely to be as successful as the Kurdish warlords say about this.

If only because the enclave is not the territory of Turkey, and the occupiers can not stand on ceremony with the population, without the support of which a long guerrilla war is impossible. In addition, for the dirtiest work, Ankara has “independent” SSAs, who can easily be trusted with the “solution of the Kurdish issue” in the event of a real serious partisan threat.
Recall that the Kurdish gangs performed the same task during the Armenian Genocide in 1915. The Turks willingly delegated the bloodiest "work" to them.

However, the "guerrilla" threats of YPG are likely to remain threats. And they were pronounced only to say something at all after the flight from Afrin. Moreover, as the Turkish edition of Anadolu reported, the Turks and Islamists, by the evening of March 18, the northern, eastern and western regions of the region, including six cities of Raju, Bulbul, Sheikh Hadid, Jinderes and Mabatly, took complete control.

Why did the Kurds surrender the city without a fight, when the YPG militants recently swore and swore to die for Afrin?

Most likely, the explanation for this is the agreement reached between Ankara and Washington.

Recall that recently the head of the Turkish Foreign Ministry, Mevlüt авavuşoогlu, announced that a withdrawal of Kurdish militants from Manbij was agreed with the US.
“YPG in Manbidz will not remain under any circumstances. There will remain the US and Turkish military, who will control the withdrawal of the YPG and will ensure security there, ”the Turkish Foreign Minister said, adding that such a withdrawal scheme of the Kurdish formations will be applied in Manbidzh, and later in others, for example, in Raqqa and the eastern bank of the Euphrates.
It must be said that the words of Chavoshoglu are similar to the truth, and the Americans "surrendered" their Kurdish allies, in exchange for the right to maintain their military presence in the "30-kilometer security zone" along the Turkish-Syrian border.

Probably, this conspiracy also involves some kind of territory where the Americans will be able to withdraw Kurdish gangs under their control. Although, as we see, the Turks are aiming at Raqqa and other territories controlled today by the pro-American coalition, consisting mainly of Kurdish troops.

Recall that Damascus and Moscow offered the Kurdish enclaves in the north of Syria protection and the creation of their autonomy within the framework of the CAP, but the leaders of the YPG and VTS preferred the proposal loyalty to the US and hopes of building a "Great Kurdistan".

The Americans, in turn, in order to avoid a highly undesirable direct confrontation with the Turks, which could escalate into an armed conflict with a NATO member country, Kurds were “merged”, and the YPG leaders who were in their salaries were forced to surrender. And the talk of a “large-scale guerrilla war” is intended to divert attention from ordinary militants and the Kurdish public from this fact.

It is noteworthy that the Kurdish administration of Afrin held a press conference in the village of Shahba, co-chairman of the Executive Council Osman Sheikh Isa, read out a statement in which he announced the "evacuation" of the city in order to "avoid massacres among the civilian population and a major humanitarian catastrophe."

Moreover, the co-chair blamed the incident ... Russia! He stated the following: “The attack on Afrin began on January 20, with the complicity of Russia and in the silence of regional powers. Russia opened its airspace for Turkey to commit the massacre of our people with all its weaponsand sacrificed our people for their interests. ”

As we can see, the cynicism of American mercenaries, who rejected the help of Damascus and Russia on instructions from their "employers", is unlimited.
What next? In addition to the campaign on Manbij announced by Chavoshoglu, one can expect Turkish activity in other directions. In particular, according to Kurdish sources that have not yet received official confirmation, a detachment of Turkish troops entered the mountainous region of Sidakan in the north of the Kurdish autonomous region of Iraq. As always, under the pretext of fighting the formations of the "Kurdistan Workers Party".

It is also reported that the borders of autonomy are being pulled by Iraqi troops and militia. To counter the Turks, or for joint actions with them, it is impossible to say for sure. Although the second option seems more likely.

In Afrin himself, the Turks intend to create a collaborationist administration of the "oppositionists" - the Islamists of the SSA. Turkish Deputy Prime Minister Bekir Bozdag, saying that Turkish troops will leave Afrin after the transfer of this region to the “real masters”. According to the official Ankara, it is the “real masters” who the Turkish Deputy Prime Minister didn’t specify, but there is reason to believe that the talk was about jihadist gangs.

If we consider that the militants created by the Turks of the SSA are from almost all the terrorist groups operating in Syria, we can expect that Afrin will turn into another gangster enclave, like Idlib.

That is, the issue of the liberation of the enclave will sooner or later arise before the Syrian authorities.

Ctrl Enter
Noticed oshЫbku Highlight text and press. Ctrl + Enter
We are
Ankara went to unexpected measures in an attempt to beat Moscow and Damascus. Commando and "al-Nusra" in Tayip's cunning planSituational analysis of the death of the MH17 flight (Malaysian Boeing 777), made on the basis of engineering analysis from 15.08.2014
Military Reviewin Yandex News
Military Reviewin Google News
26 comments
Information
Dear reader, to leave comments on the publication, you must sign in.