What will Putin allow himself with the support in 77%?

March 20 2018
467
After the announcement of the results of the presidential election (at that time preliminary), a considerable number of citizens had a question: if the level of trust in the president is more than three quarters of the number of those who came to the polling stations, how would Vladimir Putin use this incredibly high level of trust? This is not an idle question, given the fact that many people went to the polls and put a check mark in front of Putin’s name only to give the president a chance not only to bring order to the domestic policy, but also to solve the most important task - to increase the economic viability of the country with huge resources and capabilities.


So, if we assume that all the previous presidency (plus premiership), Vladimir Putin needed to stop the collapse of the country, break the backbone of terrorist scum, make the "partners" forget about the unipolar world, including the method of reviving the Armed Forces of Russia, to return the country’s self-esteem against the background of the decision to reunite with the Crimea and Sevastopol with Russia, what can be put at the forefront in the new six-year-old? 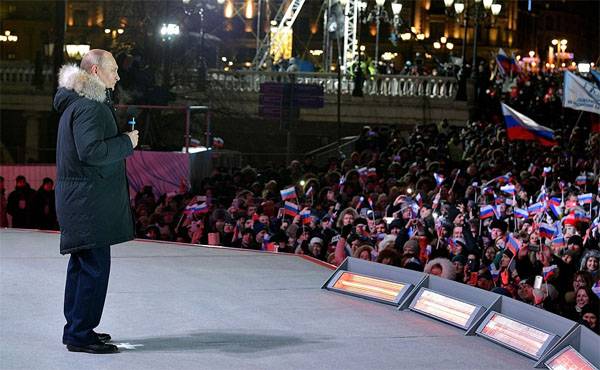 It is clear that we can talk specifically about the economy, the state of affairs in the “okolonulya” format in which for a country like Russia has been pretty long drawn out.

However, as is well known, the solution of directly economic tasks is not the direct responsibility of the President of the Russian Federation. And here another question is indicated: will the government change “horses” “at the crossing”? Indeed, in the Kremlin, by definition, they cannot but understand that almost 77% of the votes cast by Russians for Vladimir Putin is not only approval by the majority of what was done by the president, but also (perhaps even first of all) a kind of advance payment what can be done in the future.

So, about "horses" and "crossing".

Among political analysts of the Russian Federation, the view was expressed that the main government "horses", including the main one in the Cabinet, would not lose their seats even after Vladimir Putin officially assumed office. It is worthwhile to speculate on this topic, especially since this is actually a problem for the president.

If you don’t change any of the government ministers, primarily the economic bloc, then many fellow citizens simply don’t understand it, having decided that the obscure economic growth “okolonulya” completely suits the power, as the power and the system of official unbridledness suits the lack of at least appearance measures.

On the other hand, the president may well change a couple of “horses” for the appearance of change, but the pace of movement is unlikely to change in the direction of acceleration, because all other “horses” are accustomed to move a leisurely jog. And if the pace does not change, then again the "okolonulya" option and again public complaints against the president about his "horses at the crossing do not change." It is unlikely that Vladimir Putin will arrange it against the background of the speech he delivered to the representatives of the Federal Assembly. In the speech, quite ambitious goals and objectives were outlined, initially abandoning the solution of which meant cruelly deceiving the voter.

Option Three: a total update of the entire cabinet. But there are some pitfalls here too. Probably, society is shocked by the real euphoria, if the government elite, together with the economy unit and forever apologizing "for doping", suddenly in May go far away from the Cabinet seats. That's just the euphoria, unfortunately, can be quite short-lived, since updating “at the root” is a risk not only for the current government itself, but also for the country as a whole. This is from a series of claims that the then Russian national football team coach Fabio Capello presented to the fans at the time. Like, Don Fabio, you do not update the composition, because the Russian national team is losing. Throw these "bowleg" in the neck. Take young, talented. When the degree of criticism reached the boiling point, Capello clearly as a mockery released on the field completely young and experimental composition. The result was deplorable ... Capello left the coach.

So which option would Putin prefer? To answer this question, one could wait just a month or two. Well, suppose now ...

Changes in the government will be. As they say, they can not be. And there will be these changes, which are called, point, at the level of microsurgery. From the system can be “cut out” those who are already so zapronzvel in it that instead of working can create, perhaps, its appearance. Another thing is that all these potentially prepared for “cutting out” gentlemen may initially disagree with the fact that they are the “weak link”, which means, through a system of lobbyists, reshalschikov and other elements of the “vertical”, they will try to prove that they are not better touch. How is it on the classics of Soviet cinema: "Practice better on ... cats." But the piquancy of the situation is that “enough cats have already practiced enough time, and therefore the president himself admits that one of the most acute problems in the country has not been eliminated - corruption. It is her cogs, nuts and gears - those same reshalschiki with shiny faces, who know which corridor to go through and which door to knock. And in addition to small cogs, there are also whole "dinosaurs" of bureaucratic "fauna", which are dug in behind the backs of ministers. For example, those who celebrate voucher privatization, who, as is well known, are still in bread positions.

And this is a real challenge for the president. If he is unable to isolate from the system the elements of decay, which is thrown onto many other areas of a large organism, then why does the president have support at the level of 77%? Such support can and should be used. The Russian people have provided a huge credit of trust, and it’s simply impossible to not repay the real work on economic growth and eradicating the corruption that has hit the country. The main thing here is not to dwell on the idea that all those who wish to restrain Russia in every way and rob the millions of Russian citizens live exclusively in the area of ​​Capitol Hill ...

Ctrl Enter
Noticed oshЫbku Highlight text and press. Ctrl + Enter
We are
Reports from the militia of New Russia for 27-28 September 2014 of the yearResults of the week. "Well, do not change me because of every idiot!"
Military Reviewin Yandex News
Military Reviewin Google News
467 comments
Information
Dear reader, to leave comments on the publication, you must sign in.