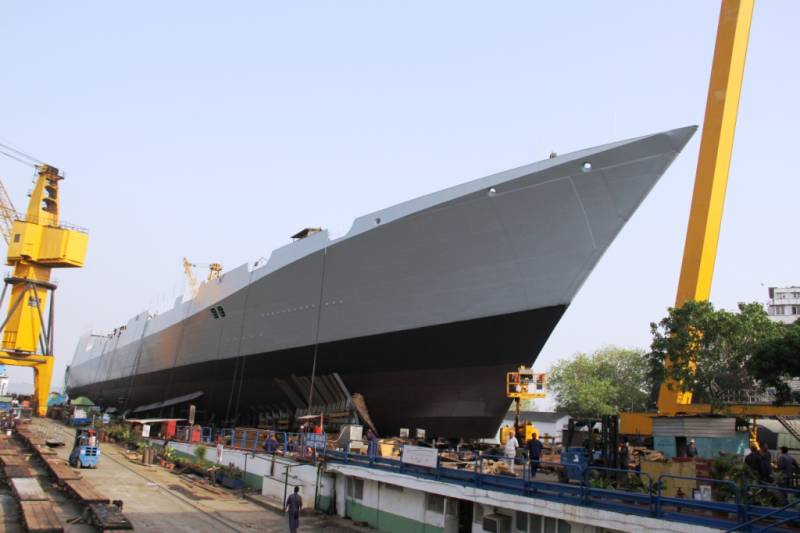 INS Visakhapatnam was designed by the Naval Development Authority of India with the participation of specialists from the Northern Design Bureau (St. Petersburg).

The power plant - gas turbine, combined, type COGAG - two independent turbines for each propeller shaft. The ability to turn off one of the turbines at an economical rate increases fuel efficiency (because at full load, the efficiency of the gas turbine is higher than in the 50% power mode). As the main engines, two units MXNUME (36 gas turbines, two gearboxes) manufactured by Zorya-Mashproekt (Ukraine) are used.

The lines of the propeller shafts are made at the Baltic Shipyard (St. Petersburg).

The hull is made at the shipyard Mazagon Doc Limited (Mumbai).

The most notable innovation of the 15B type destroyer is its network-centric BIUS, which allows it to provide high situational awareness for each combat position. In addition to the basic functions of the combat command and control system (analysis of incoming information, classification and prioritization of targets, selection and preparation weapons), the new version provides automatic distribution of energy between ship systems.

The creation of the radar complex and detection equipment for the Indian destroyer was carried out by the Israeli IAI Elta with limited participation of Indian specialists (Bharat Electronics) and the well-known European company Thales Group. 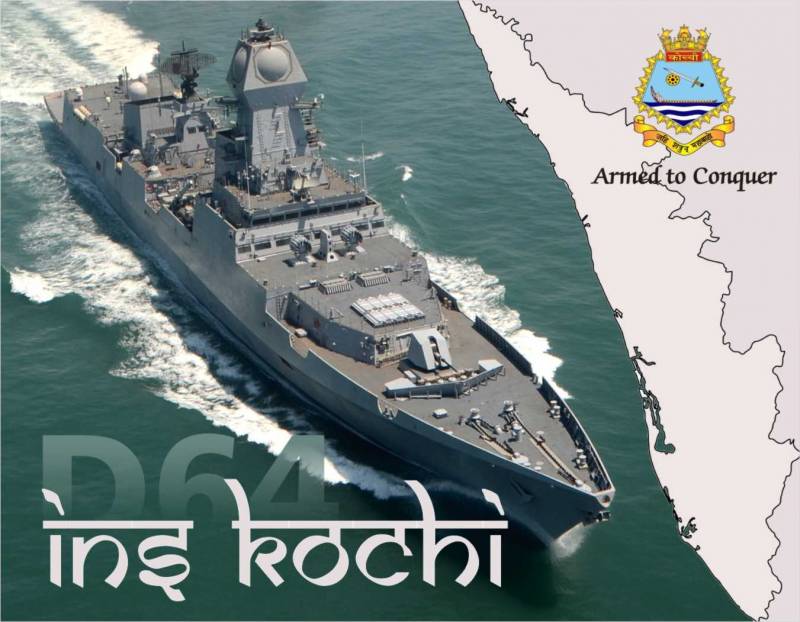 Destroyer of the previous type 15-Alpha ("Calcutta"), externally identical to the destroyers 15-Bravo

The Israelis offered the EL / M-2248 MF-STAR multi-function radar for monitoring the airspace and controlling missile weapons. According to the developer, the use of active phased antennas increases the efficiency of the MF-STAR radar when detecting unobtrusive targets in a difficult jamming environment. To counter radio interception systems, LPI technology is used (low probability of signal interception), at which the frequency of 1000 learning is tuned once a second. In addition to the basic functions, the radar can be used to adjust artillery fire in the bursts of falling shells.

The manufacturer draws attention to the low mass of the radar - the antenna post consisting of four AFARs, together with the underdeck equipment, weighs only about 7 tons.

The only controversial aspect of the Israeli radar is its operating range (decimeter waves, S-band). This made it possible to increase the detection range and level the influence of weather conditions, compared with similar systems operating in the centimeter wave band (APAR, SAMPSON, OPS-50). But, on the basis of world practice, such a decision should negatively affect the accuracy of tracking high-speed small-sized targets. Probably, the specialists of “Elta” managed to partially solve the problem due to the software signal processing algorithms.

The presence of two-coordinate Thales LW-08 two-coordinate radar with a horn transmitter and a parabolic reflector on a destroyer of the 21st century may be surprising. In my opinion, the only reason for the emergence of LW-08 is its manufacturer - the company Bharat Electronics, producing under license samples of the European systems of the previous generation.

Perfect enough for its time (1980-s), the system is used as a backup radar paired with a multifunctional Israeli MF-STAR. The indicated working range D is an outdated designation for the decimeter range with 15-30 wavelengths see.

The Israeli Barak-8 medium / long range air defense system (Molniya-8), capable of hitting air targets at ranges up to 70 km (some sources indicate the 100 km value), in the altitude range from 0 to 16 000 m. Among the advantages - active HOS, operating in the radio wave and thermal spectra (auxiliary IR-mode targeting with a small EPR). 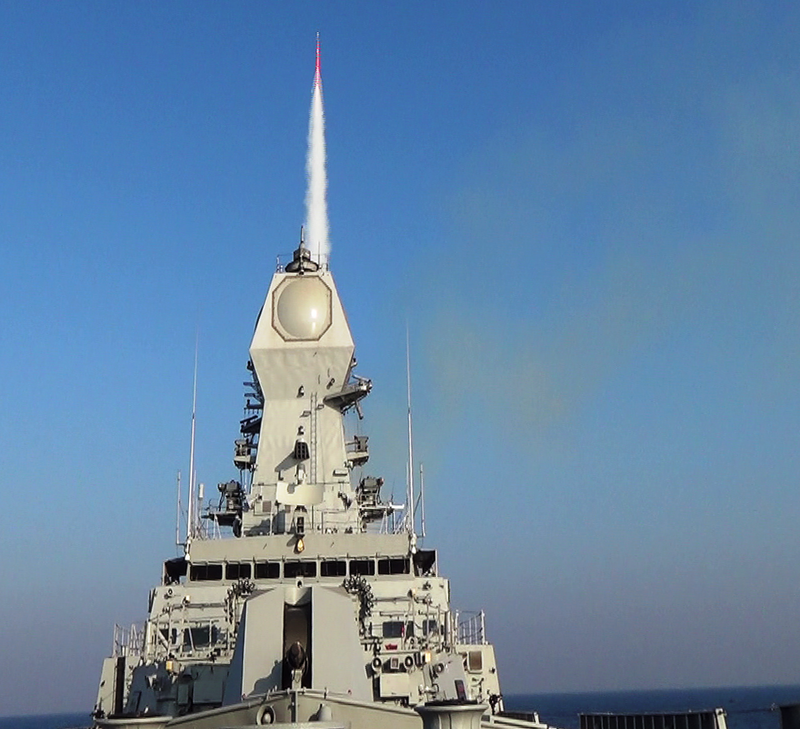 Launch of anti-aircraft missiles from the destroyer type "Calcutta"

The complex is distinguished by its compactness (the launch mass of the 275 kg rocket), storage and launch of rocket ammunition is made from the CID. Among other advantages: a combat unit that is quite powerful for such a lightweight missile (60 kg). The presence of a controlled vector thrust. The rocket is equipped with a double-engagement engine, which makes it possible to realize the most favorable trajectories when flying to targets at different distances; as well as develop greater speed when approaching the goal.

The most significant disadvantage of the Bark missiles is the low cruising speed of the flight (2М) - five times slower than domestic Fortress missiles. In part, this problem is offset by the possibility of re-enabling the solid propellant rocket motor on the final part of the trajectory.

Another unpleasant feature is the launch from a specialized UVP, which forces you to have two types of launchers, without the possibility of unification and its use for other types of ammunition (Mk.41, European Sylver). However, if there is enough space on the ship, this problem fades into the background.

A total of 32 launch cells for anti-aircraft missiles are provided on board the Indian destroyer.

Total cost four sets of ship-borne air defense missile systems for destroyers of the type 15B under construction amounted, according to official data, to 630 million dollars (2017), a very moderate amount against the background of global trends.

If you do not take into account the personal interests of those responsible, the choice of Barak-8 as the main means of defense of the Indian fleet dictated by the compactness and relatively low cost of the complex (at the cost of deteriorating energy capabilities of missiles and limiting the range of interception). Barak-8 is a reasonable compromise that allows you to get capabilities close to the best naval air defense / missile defense systems of long range, at significantly lower costs.

The destroyer armament of the destroyer includes two modules (16 UVP) for launching two types of cruise missiles: the long-range cruise missile Nirbhay (Fearless, the Indian counterpart of Caliber) for attacking ground targets at a range of 1000 + km, and three-dimensional supersonic anti-ship missiles PJ-10 “BrahMos” (“Bakhmaputra-Moscow”, a joint development based on the P-800 “Onyx”). 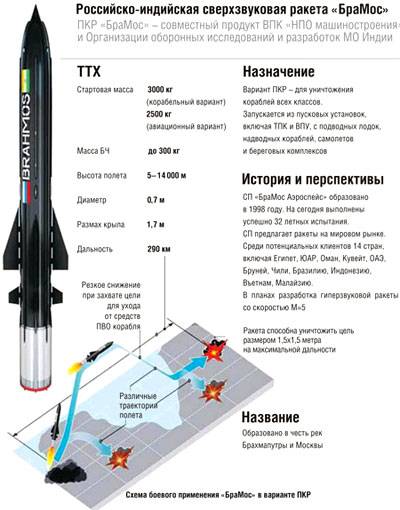 Given the high characteristics of the Brahmos anti-ship missiles (low speed 2,5М +) and the number of missiles, the Indian destroyer in the anti-ship configuration (all 16 mines are occupied by anti-ship missiles) surpasses all existing types of ships in shock power, including even Soviet-style missile cruisers.

Of course, this assessment does not correspond to the real combat situation. These are all technical notes submitted for a sober assessment of threats emanating from the Indian “missile carrier”.

The destroyer is equipped with a set of classic anti-submarine weapons of various generations, the real effectiveness of which is difficult to estimate. The presence on board of two anti-submarine / multi-purpose helicopters (such as “Sea King” or HAL “Dhruv”) expands the boundaries of the PLO zone. On the other hand, the absence of rocket-torpedoes and the dubious characteristics of the GAS do not give confidence in the fight against modern submarines.

The destroyer is equipped with the sonar of the Indian company Bharat Electronics. Obviously, we are not talking about the undercarriage gas, because in the presented pictures at the moment of launching, there is no characteristic “drop” (a massive sonar fairing in the nose of the destroyer). The presence of a towed low-frequency antenna is also not reported.

INS Visakhapatnam sailing afloat, caught on camera during the launch of the INS Khanderi submarine

For the destruction of submarines in the near zone, self-guided torpedoes of caliber 533 mm and two obsolete RBU-6000 are provided. The presence of the latter is only a given of traditions. Bombers (even reactive) are completely ineffective in modern conditions. The only more or less realistic assignment is the destruction of torpedoes with their help. This task also contains many unknowns; to counter the torpedo threat, it is more useful to use various towed traps.

Speaking of traps. The destroyer is equipped with the Kavach passive jamming complex of its own Indian design. Kavach missiles are capable of creating veils of radio reflecting particles at a distance of up to 7 nautical miles.

The reason why these systems are still used in the fleet remains unclear. The power of 5 projectiles is too small to hit any possible targets. On the other hand, 17 tons - a small price for the opportunity to make a warning shot under the nose of the offending vessel. Or finish off the “youngsters” by making 150 guns of mercy shots.

For the defense in the near zone, two batteries are provided - each consists of two six-barrel AK-630 automatic rifles and a fire control radar. It is noteworthy that, unlike the US Navy, the Indians do not save on such things. Or not yet fully realized the horror of the situation. Shoot down missiles near the ship - you can, but it's too late. In real combat, the benefits of any rapid-fire cannons (“Phalanx”, “Goalkeeper”, etc.) remain in question - fragments of downed rockets, one way or another, reach and cause damage to ships.

Structurally, INS Visakhapatnam and three of its fellows continue the ideas embodied in the destroyers of the previous type “Calcutta” (adopted in the fleet in 2014-2016), differing from them by increased armament and more modern “stuffing”.

The technical level of the destroyers of the Indian Navy does not yet reach the favorites - first-class destroyers of Great Britain, the United States and Japan. And the presence of a dozen foreign contractors does not contribute to an increase in combat effectiveness in the event of an aggravation of the international situation. And it indicates only the weakness of the Indian military-industrial complex.

At the same time, the Hindus managed to build one of the most interesting destroyers in their class (7000 tons), which differs from the standard concept of the American “burka”. The project’s weaknesses are leveled by its impressive anti-ship weapons. Unlike most fleets, Indians do not build ships to launch a pair of rockets around the ruins in the desert.

The creation of the destroyer type 15-Bravo was also attended by Russian specialists who gained experience in designing modern warships. Experience is what we get when we don't get what we want. Our Navy such ships would also have come in handy. 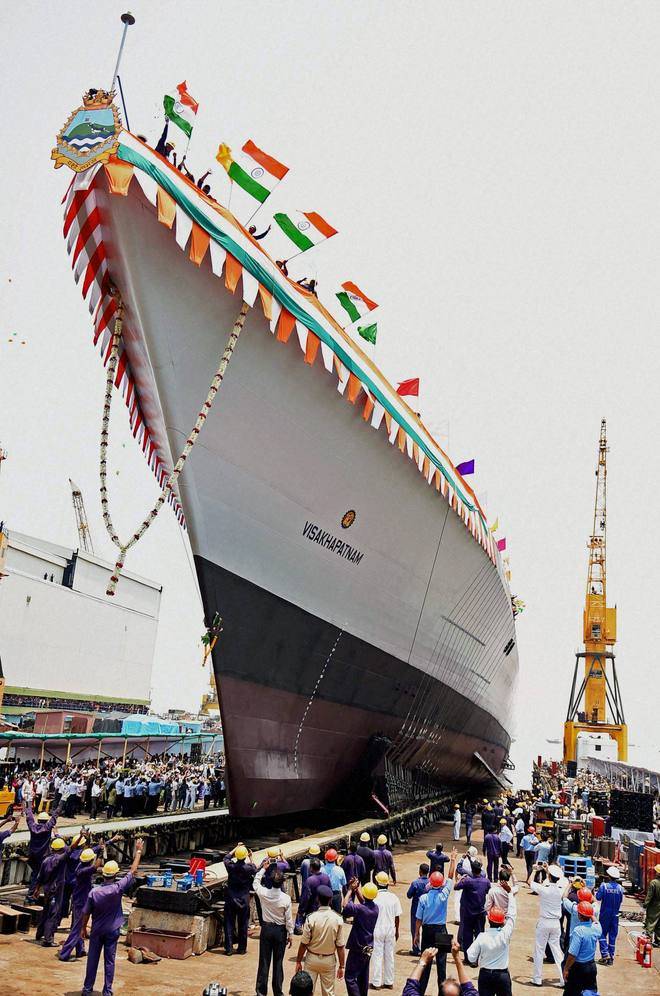 Ctrl Enter
Noticed oshЫbku Highlight text and press. Ctrl + Enter
We are
"Full Electromotive": the concept of the warships of the futureNew Navy ships of India: INS Kolkata and INS Kamorta
Military Reviewin Yandex News
Military Reviewin Google News
65 comments
Information
Dear reader, to leave comments on the publication, you must sign in.