Germany + Austria: A look through 80 years 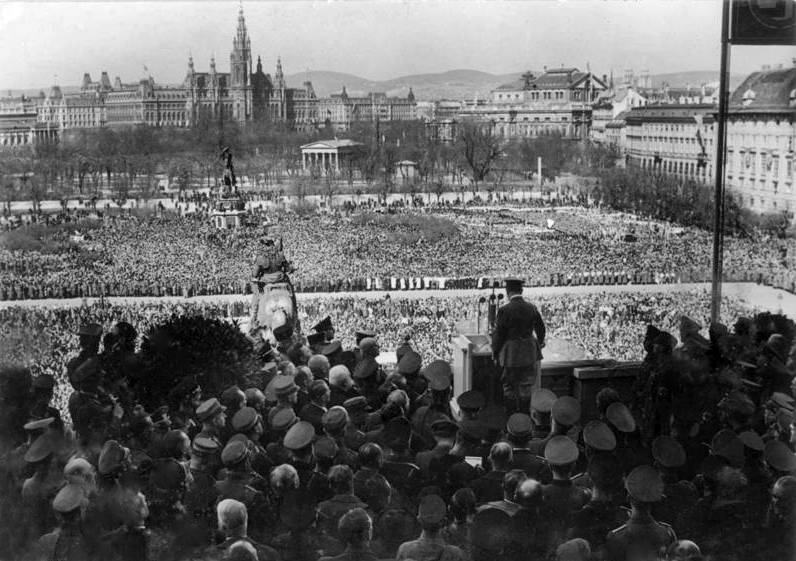 On the one hand, it seems to be nothing. Well, Anschluss ... Especially since so much time has passed!

However, when I sat down to study everything that was happening in Austria, as we moved more and more analogies were with completely different countries.

I think closer to the end you will understand what's what. 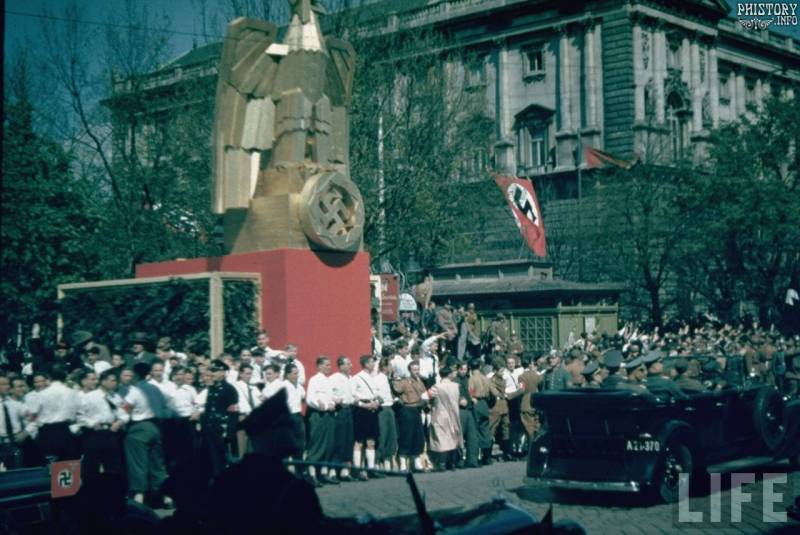 In general, the idea of ​​combining was not new. The great German Chancellor Otto von Bismarck dreamed about this. But the realization of the dream was realized by Adolf Hitler.

And then a bunch of historical nuances.

The first. Unlike all subsequent acquisitions for “Greater Germany”, not only did the annexation take place without a single shot, but also with the full support of the Austrians.

Second. Economic background. To say that Austria was thrown into the arms of Hitler - well, it is to say nothing. But more about this in more detail below.

Third. After the war, when Germany was once again broken up, Austria for some reason was considered a country liberated from Nazism with all the outgoing consequences.

And it is worth starting with item No. 2.

The Austrian origin of Hitler, as many believe, is generally not a reason for unification. The idea of ​​“reuniting the German people” was pressing long before Hitler came, oddly enough. Since the end of the First World War.

When the Austro-Hungarian Empire collapsed, it turned out that Austria turned out to be a very modest state by European standards. Both geographically and in terms of population. The newborn state was generally considered unviable.

However, the Germans who inhabited Austria (mostly) nevertheless, rolling up their sleeves, began to improve their lives. But they did not forget about the brothers in Germany, attempts to make an alliance with their neighbors began almost immediately. Of course, the Entente in the face of the remaining members did not allow such a plot to develop.

In general, the winners treated the losers in such a way that the birth of revanchism in German society with the subsequent arrival of revanchists to power became a matter of time.

Given the proximity to Italy, it is not surprising that during the raging economic crisis in Austria, totalitarian ideologies dominated in people's minds: communism, fascism and Nazism. 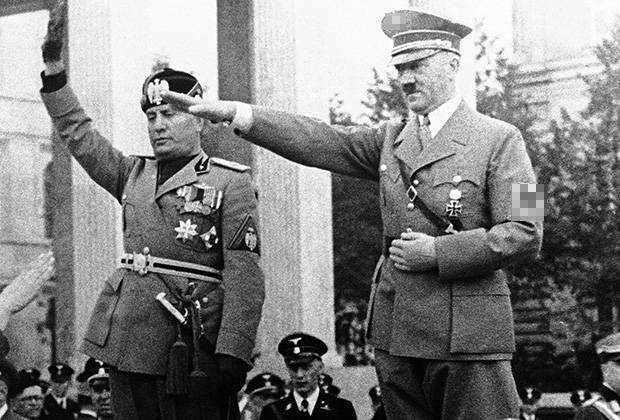 Officially, very moderate Social Democrats were in power in Austria. But, in addition to totalitarian currents, there was a standoff with the right-wing forces in the face of Christian socialists.

In 1933 (!!!), Chancellor Engelbert Dolfus, fearing the victory of the left in the elections, dissolved the parliament and proclaimed a “corporate dictatorship” - a system that was supposed to repel both the socialists and the German nationalists. Supporters of this ideology are often called “Austro-Fascists”.

The Dolfus government abolished the elections, reinstated the death penalty, banned the activities of the communists and the Nazis, and created a single organization with the church called the Patriotic Front. Later, the Austro-Fashista outlawed the Social Democratic Party. Just in case.

Austrian fascism, of course, could not dislike the Italian dictator Benito Mussolini - after all, even the Austrian “May Constitution” very much resembled his own. Duce dreamed of creating the “Danube Federation”, and Austria saw him as the most important ally in the implementation of these plans.

In the 1934 year, during a coup attempt, Dülfus was killed. The coup was not successful. Whether the readiness of the Austrians was to blame, or the four divisions of Mussolini, who had risen on the border.

But in the 1938 year, when Hitler firmly decided that Austria was “time to go home,” Mussolini did not want to clash with him. And he went "on the hunt." 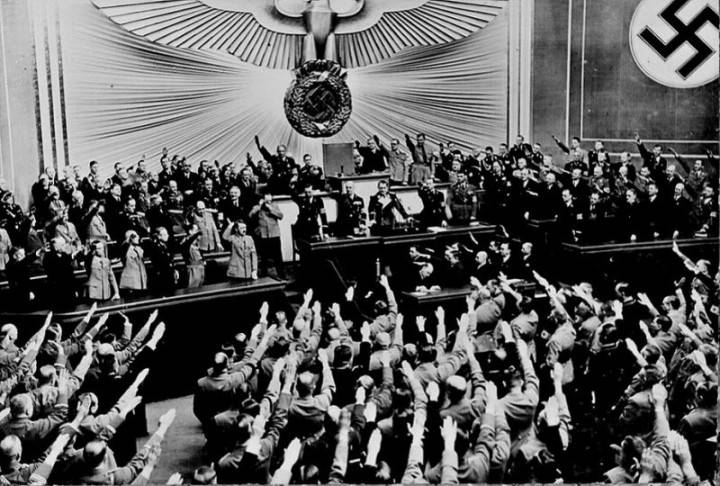 The new Chancellor Schusching had no choice but to pass on Austria to Hitler. Schuschnigg and the president of Austria Miklas were arrested for this and until the end of the war the former chancellor sat in concentration camps ...

And on April 10 in Austria, nevertheless, passed a referendum on joining Germany planned by Schuschnigg. But already after. The result, announced by Nazi propaganda, was loud: 99,8 percent of the country's population supported reunification.

And, by the way, do not suspect the "new" authorities of fraud: over the next years, the Austrians proved to be even more fanatical National Socialists than the Germans. By the end of the war in the NSDAP there were up to 700 thousands of Austrian citizens - almost every fifth Austrian.

It is worth mentioning that membership in the NSDAP was optional, but who didn’t accept anyone?

Well, a few words about the tolerance of the Austrians should be said. When Hitler took over the Jews, in Austria everything was quiet and calm. But after the Austrians completely made up for themselves. Before the Anschluss, about 200 thousands of Jews lived in small Austria, and more than 50 thousands came running from Germany.

The number of those who did not have time to escape from Austria and was destroyed: about 65 thousands. There are documents in which Kaltenbrunner himself roared at particularly zealous countrymen. But so ... friendly.

So, in fact, the history of Austria ceased for a while and the short history of the state of Ostmark began.

It is quite normal for the Austrians (we will continue to call them that) served in the Wehrmacht and the SS. The Wehrmacht was called up about 1,2 million Ostmark residents who were not considered bad warriors at all.

During the war years, 240 Austrians served as generals in the Wehrmacht, SS and police. Austrian SS units were thrown into the fight against the Yugoslav partisans, and they were no less cruel than the elite units of Himmler.

However, the number of activists and opponents of the regime was barely distinguishable against the general background of the gray mass of opportunists. Not sharing the goals of the war, and even losing the right to be called Austrians, the overwhelming majority of the inhabitants of Eastern Ostmark province continued to live peacefully under Nazism.

Moreover, industry, agriculture and tourism developed at an unprecedented pace. By May 1941, there were about 3 thousands of official unemployed in the whole of Ostmark. The unemployment rate has been reduced tenfold.

Well, again, the invisible patronage of a fellow countryman ...

Stories that the Austrians were supposedly "cannon fodder" for the Germans, do not receive confirmation. And it all started only after the first serious losses. Voronezh and Stalingrad. Well, the bombing that has begun aviation Allies in 1943.

It is impossible to say unequivocally that everything in Ostmark was very often a fan of Nazism. Of course not. More than 3 thousands of Austrians fought in the British army and 4 thousands - in the French Resistance. The Communists, who were not cleaned up by the SS and SD, also made their contribution.

According to modern data, almost 45% of those killed in the dungeons of the Gestapo Ostmarka are the communists of Austria and Germany. The number of about 35 thousands of people.

Go to the last oddity. Yes, it is strange, but after the end of the war, it was newly created Austria that for many years was considered the “first victim of Nazism”.

And the medal, which was awarded to the Soviet soldiers, knocked the Germans out of Vienna, for "liberation", and not for "capture". Although they took. By storm. And they paid thousands of our soldiers and officers during the assault on the lives of 26. 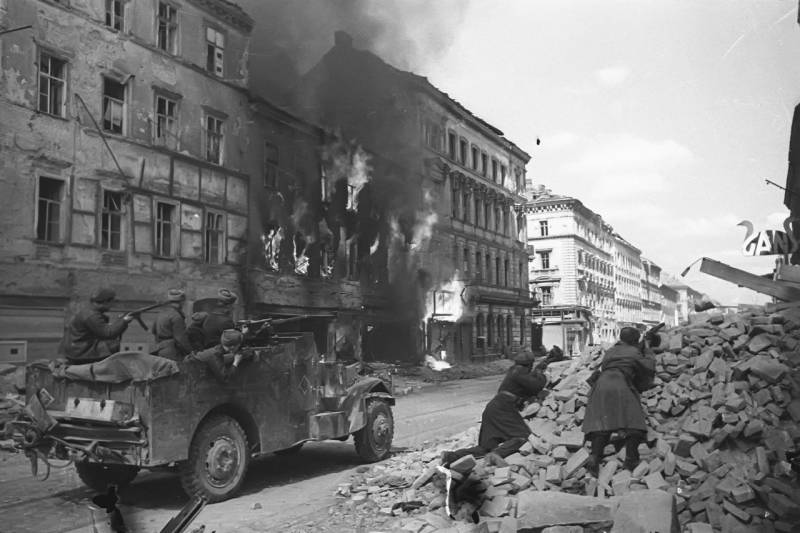 And the “tomorrow” of Austria, too, was far from being like in Germany.

Denazification in the country was extremely benign and ended by the year of 1948. Many researchers emphasize that the wording “extremely mild” is poorly said. Former SS functionaries quietly worked in the government, wrote new school history textbooks, and so on.

About war crimes - silence. If there was anything, it’s all from the Germans. Austrians are completely white and fluffy. Wehrmacht veterans have always been honored.

Such a doctrine suited almost everyone, since it really formed a new nation, fundamentally different from the Germans.

And this myth calmly existed until the end of the last century. Well, the Jews - they are ... you will not break. The Austrians had to admit many things that were completely unpleasant for them, such as participation in the SS and the Holocaust, and even paid more than 2001 million dollars of restitution to the Jewish diasporas in the 900 year under the Washington agreement.

I will emphasize boldly: only in 2001 did Austria confess its sins. Before…

The myth of the differences between the Austrians in the past collapsed. What's next?

But it is worth noting that accepting responsibility for what was done during the Second World War was hardly a wedge between Austria and Germany, wasn’t it? Quite the contrary.

The further, the more historians admit that the majority of Austrians supported the war on the side of the geek from Linz to the very end.

And when the end marked by the Tolbukhin fighters under the walls of Vienna was inevitable, they allowed themselves to be set free.

Do not remind anyone? It reminds me so much. Four states that do not know how to draw conclusions from their past.

The problem is that the Austrians have Germans. In Germany. Yes, we will not talk about the second Anschluss today, since there are states in modern Europe, but in fact there are no borders.

But this is Austria and Germany. Inhabited by virtually one people. Committed in the past almost the same mistakes.

Today, the history of these two countries cannot but should serve as an example. It is clear why.

Ctrl Enter
Noticed oshЫbku Highlight text and press. Ctrl + Enter
We are
Results of the week. "Well, do not change me because of every idiot!"Yuri Drozdov: Russia prepared the role of the sacrificial calf
Military Reviewin Yandex News
Military Reviewin Google News
21 comment
Information
Dear reader, to leave comments on the publication, you must sign in.