Borya, vodka, rock and roll. How the “partners” did not keep track of Yeltsin’s dance

March 19 2018
58
The theme of the election rattles. The turnout, the first results, the discussion of online broadcasts from the sites, the next screech of dissent, who each time invent a new reason for their disagreement. Non-systemic, it’s also non-systemic and non-systemic, the opposition already calls the current presidential elections "the most scandalous in recent years." Although the scandalousness of these elections is primarily related to their assessments by those who have become a so-called absenteeist and simply ignored participation in the vote. Among the absenteeists are the “dissenters” themselves, who have launched a whole campaign calling on citizens not to go to the polls as much as they are.


At the same time, it is impossible to deny the fact that the scandalous presidential election in the newest stories Russia really happened. The undisputed favorite of the “scandal rating” is the election of the 1996 of the year. It’s about the very elections when a person was re-elected as a president, whose rating before the start of the election race did not give any reason to assume that the country would elect the head of state for the next 4-year term.

So, in January 1996, Boris Yeltsin’s rating was at around 6 percent, and was quite seriously inferior to Gennady Zyuganov’s electoral rating. In Zyuganov, sociological monitoring services in that year were fixed at about 14-15% of the rating - according to some services, and up to 30% - according to others). Yeltsin’s 6% rating was cited by the Public Opinion Foundation.

Despite such unintelligible figures, the so-called democrats, as well as external sponsors of what was called democracy in Russia at that time, put on Yeltsin. A very “original” decision is the same as putting a racer at the races, which, due to objective reasons, will not be able to come first to the finish line. Were they going to bet on another candidate instead of Yeltsin? Yes, there were options. One of these options - Anatoly Sobchak, the then mayor of St. Petersburg, is very popular in the city on the Neva. However, Sobchak, after talking with the “candidate number one,” said that he would not participate in the 1996 elections.

From the then statement of the head of St. Petersburg:
Yeltsin will go for a second term, no matter what.

And this “in spite of everything” on the one hand looked like an absolute gamble of the “democrats”, and on the other hand gave rise to suspect the system that in 1996 it was guided by the well-known postulate “It’s not how they vote, but how they think”. Counted "right." And the result of a person with a 6-percentage rating has become a phenomenon in the modern political world. True, it was hardly worth the surprise then, especially after the statement by US President Bill Clinton, made shortly before the elections in Russia:
I really want this man (guy) to win.

He won in such a way that even those who took part in the artificially inflating the Yeltsin rating, after the elections recognized that by all standards a completely different candidate had won. True, this very “other candidate” announced after some time that the struggle for power was then actually merged, adding approximately the following: he did not want blood. On the one hand, highly, humanely, generously, and on the other hand - why then did this whole circus with horses get settled? - to throw millions of those who really supported the candidate?

But those elections were “wonderful” not only because a man with a “plinth” rating actually celebrated the victory in them. “Wonderful” they were, for example, the fact that Mikhail Gorbachev took part in them. Himself "the greatest genius of perestroika." And here, too, there is a reason to be surprised once again. So, to participate in the elections candidates had to collect 1 million signatures. Gorbachev, if you believe the then composition of the CEC, his million gathered. And in the course of voting for Mikhail Gorbachev, slightly more than 386 thousand people voted. In other words, (purely mathematically) even those who put his signatures before the election did not vote for the candidate Gorbachev. This is the question of what methods of signature were collected, and whether they were collected at all ...

Question: for what purpose did Gorbachev go to the elections in 1996?

Gorbachev himself is trying to answer this question (then, during the pre-election race):
Russia is hard. I can not stand and rub my hands: they say you then brewed porridge with Yeltsin, and here you dissolve. No, I would not be Gorbachev. We must help Russia to help out.


This statement by Gorbachev about "helping the country" and the need to "help out" actually repeated exactly his statements in those years when he was at the head of the USSR. Helped ... Rescued ... The country is gone. And it could not be in 1996 year (already the Russian Federation) - at least against the background of the Chechen conflict.

Why didn’t his Western friends bet on Gorbachev then? Why not supported.

What for? US intelligence services were clearly more knowledgeable about Gorbachev’s real 1995-1996 rankings than the CEC. Another thing is that Yeltsin’s rating indicators were only slightly better. But by that time, Gorbachev had already worked out material for them, and the same US pinned high hopes on 1996 in the year, they wanted a bet, according to which, as it seemed to Washington, their “wet” fantasies could come true and about the collapse of Russia. Suffice it to recall with what enthusiasm in the West they met (and initially promoted) the shameful for Russia Khasavyurt agreements with terrorists (after the Yeltsin "victory" in the elections). As a result of those agreements, one of the regions actually broke away from Russia, which with a new force would ultimately fuel separatist sentiments in other regions of the federation, whose elites so desired “separatism”.

In the end, Yeltsin was literally brought to the finish line, he was seated in a chair, and the “crown” was pulled over, because he was the one who arranged more than all the “friends of Russia”. 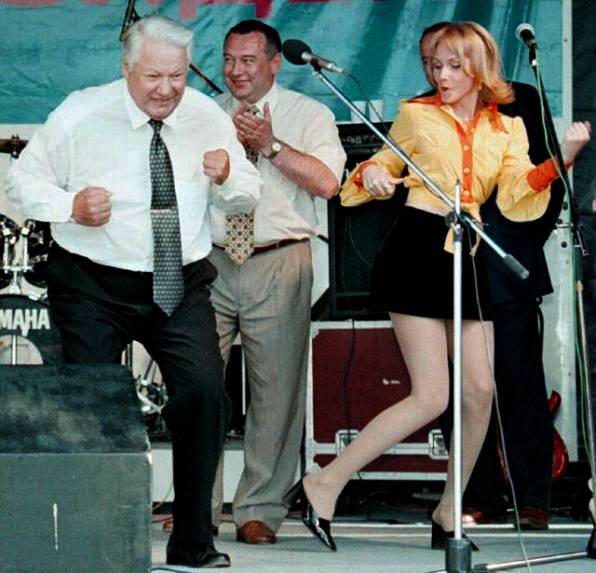 The president of a country derailed (in every sense of the word) dancing to the tune isn’t joy for those who can’t understand today how they slept Putin over Yeltsin’s dances ... At what point is Yeltsin danced not there? ..

And, having taken a frank part in the monstrous frauds in 1996, they are now shouting at all angles that the election of 2018 in Russia "was scandalous."

Ctrl Enter
Noticed oshЫbku Highlight text and press. Ctrl + Enter
We are
Situational analysis of the death of the MH17 flight (Malaysian Boeing 777), made on the basis of engineering analysis from 15.08.2014Results of the week. "Well, do not change me because of every idiot!"
Military Reviewin Yandex News
Military Reviewin Google News
58 comments
Information
Dear reader, to leave comments on the publication, you must sign in.