Merkel does not reckon with the Germans, dissatisfied with its policy towards Russia

March 19 2018
9
After a six-month government crisis, Angela Merkel sneaked into the chair of the German chancellor. This time, almost like a belligerent. One of the first actions of the Bundeskanzlerin in its old-new post was a joint statement with the leaders of America, Britain and France. In it, Russia is accused of poisoning the ex-Colonel of the GRU Sergey Skrypal, who collaborated with the British intelligence services. Thus, Merkel, at the start of her new term of work, demonstrated that she was not going to change the German policy towards Russia. 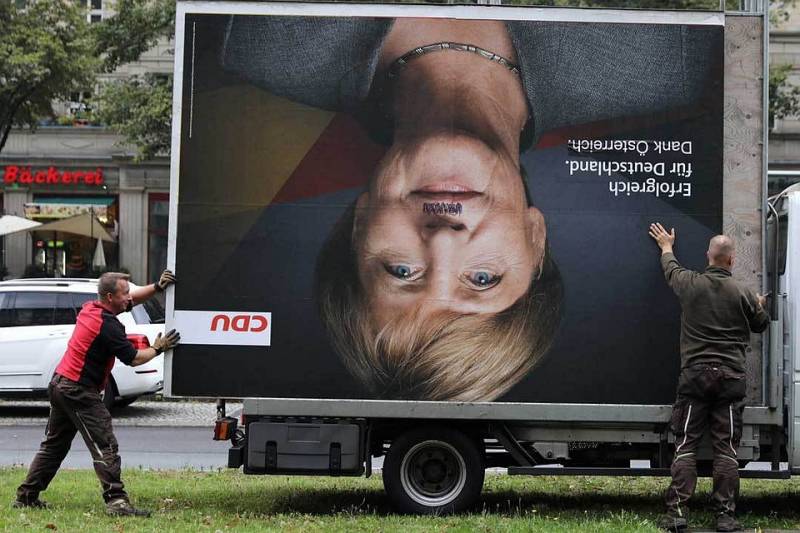 What surprised the March survey commissioned by Welt?

Meanwhile, measurements of public opinion show: in Germany, they are tired not only of Angela Merkel’s long reign, but also of her anti-Russian policy. On Saturday, March 17, the Welt newspaper published the results of a recent sociological poll, which recorded a growing desire of the Germans to move closer to Russia, to improve relations with it.

Last August, at a similar survey, less than half of the respondents spoke in favor of a rapprochement between Berlin and Moscow (42%). Now, to improve relations with Russia, 58 percent of Germans spoke and only 14 percent of respondents agreed to leave the current policy of the German authorities unchanged.

To some extent, the company they accounted for another 26 percent of respondents. These people believe that Berlin should generally distance itself from Moscow. Be that as it may, the survey clearly showed that opposition attitudes towards Merkel’s policy in the Russian direction are growing in German society.

Welt notes that residents of the eastern lands of Germany, who were previously part of the GDR, once again showed the greatest sympathy for Russia. There, 72 percentages of respondents spoke in favor of a policy of rapprochement between Germany and Russia, and 43 percentages even set themselves up for a “significant convergence”.

In the West German lands, 54 of the percent of respondents favored the rapprochement of the two countries. The same trend persists, if you look at the answers in the context of political preferences of the respondents. For the rapprochement with Russia, the majority of supporters of all major political parties, including Christian Democrats Angela Merkel, spoke.

Only the Germans who voted for environmentalists from the Soyuz-90 / Green party stand apart. But even among them the number of people who see Germany at a distance from Russia, only slightly exceeded the supporters of rapprochement - 44 and against 39 percent. But the electorate of the right-wing populist party “Alternative for Germany” overwhelmingly shares the idea of ​​rapprochement with Russia. For this, 81 responded to the percentage of respondents.

By the way, in recent years, AiG has become increasingly popular with the Germans and even held its own deputy in the autumn elections to the 94 of the Bundestag, forming the third largest faction of the German parliament. Experts predicted her even greater success if the crisis with the formation of the government leads to new early elections.

Not least, under pressure from this threat, the policies of the CDU / CSU and SDRG blocs overcame their mutual hostility and were able to eventually form a “grand coalition” of the new German government. However, they could not dismiss the sentiments of the AiG voters.

Last Friday, the new Interior Minister, the former leader of the CSU and the former Prime Minister of Bavaria, Horst Seehofer, in an interview with German media, partly repeated one of the election guidelines of AiG about the threats posed by the authorities that encourage migration to Germany from Asia and Africa.

Seehofer announced plans to "convene an Islamic conference to hold a discussion on the integration of Muslims in Germany." According to the minister, Muslims have become part of Germany, but this does not mean that the Germans, because of falsely understood tact, must abandon their own Christian traditions.

“Islam is not part of Germany,” Horst Seehofer concluded. His statement triggered an immediate response from multiculturalist Angela Merkel. “Islam is a part of Germany!” The Bundeskanzlerin retorted to her minister. Her remark clearly showed that Merkel had not learned the lessons of the last election and would continue her previous policy.

Although still in 2016, public opinion polls showed the Germans being extremely wary of Islam. Then 60 percent of respondents called Islam alien to Germany. Since then, this mood in German society, according to experts, has only increased. However, Merkel remained unconvinced.

Under the propaganda press

It seems the same will happen with the desire of the Germans to improve relations with Russia. As in the case of multiculturalism, Merkel here also does not count on the approval of the ruling cabinet’s actions by the population, but on the support of the German media, known for their widespread Russophobia.

This phenomenon was studied by the doctoral student of the University of Basel Jochen Jansen. After analyzing the publications of the German media about Russia, he came to an unexpected conclusion: “negative reports dominate among them, written in negative and disparaging tones, ... this did not happen even during the Cold War.

His study Janson accompanied by many vivid examples. This is how he saw the description of the Baikonur cosmodrome in the Handelsblatt newspaper: “a giant scrap metal warehouse”, where a successful launch of the launch vehicle should be immediately “washed”. Angered by Jochen Jansen, he wonders: “Didn’t the German author put on shoes while writing this article nazi-brown boots and did he not adore the portrait of Dr. Goebbels? In the end, the Russians from this “scrap warehouse” manage to send rockets into outer space — that would be the topic for the article! ”

By the way, in Russia there is a benevolent attitude towards the Germans. The Friedrich Ebert Foundation and the Union of the German Economy in Russia conducted a study that showed that the overwhelming majority of German citizens who are constantly working in Moscow feel quite comfortable here. 84% of respondents believe that "the German media are biased against Russia and deliberately exaggerate."

Doctoral student Jochen Jansen sees the reason for this "in the world war lost by the Germans." “The fact that the toughest battles took place on the eastern front, and Russia made the greatest contribution to the defeat of Germany, remains in the collective memory. Not forgotten is the fact that German soldiers never fought so cruelly as in Russia. To compensate for their own "debts", the Germans, after the war, preferred to recall the violence of the Red Army. The current prejudice against Russia is largely a consequence of this complex. In addition, recently the Germans see that "the enemy has stirred" - this can not but annoy. "

Jansen is probably not so far from the truth. This is supported by direct support by the Berlin politician of the coup in Kiev, organized by the heirs of Ukrainian nationalists who collaborated with the Nazis during the Second World War. Germany’s Russophobic stance is also evident by the tacit consent of its ruling elite to annual marches in the Baltic States of the not-dead SS men and the oppression of the Russian-speaking population here.

To this bleak picture one can add the increasing influence of the CIA on the editorial policy of the leading German media. Americans, not especially hiding themselves, use their NATO partners to put pressure on Russia. And even pay for their "hard work." Udo Ulfkotte, the former editor of one of the largest newspapers in Germany, Frankfurter Allgemeine Zeitung, wrote about it in detail in the book “Bought Journalism”;

It's amazing how, under such a propaganda press, the Germans still manage to change their attitude towards Russia and advocate for rapprochement with it. Many are changing, except for Chancellor Angela Merkel. They say she has a difficult relationship with Russian President Vladimir Putin.

Apparently, this is half the truth. The supervisor of the German-Russian Forum, Alexander Rahr, finds another explanation. According to him, Angela Merkel retreated from the pro-German policy of their predecessors (chancellors Helmut Schmidt, Helmut Kohl and Gerhard Schroeder), who even during the Cold War period sought a strategic balance with Moscow.

“Chancellor Merkel spoke for one hundred percent loyalty and loyalty to the United States and the pan-European policy of Germany,” said Rahr. So she not only got into operation the most notorious critics of Russia (Poland, the Baltic States and others like them), but in some ways even surpassed them, because she had a greater influence on the strengthening of anti-Russian sanctions.

Now Merkel is difficult to get out of the well-trodden political rut. Even the outlined change in the German public mood will not affect this. Germany is doomed to tolerate the chancellor, “who is walking by himself,” as the forces Merkel relies on are becoming fewer and fewer. It is unlikely that this will continue for a long time ...