The United States transferred to Europe Stryker with a laser installation

March 16 2018
68
The US Army has transferred experimental laser to Europe weapon. The 2 Cavalry Regiment of the US Army, stationed in the town of Vilsekk (Bavaria), received the Stryker MEHEL 2.0 experimental installation, the "Warspot" with reference to the portal armyrecognition.com 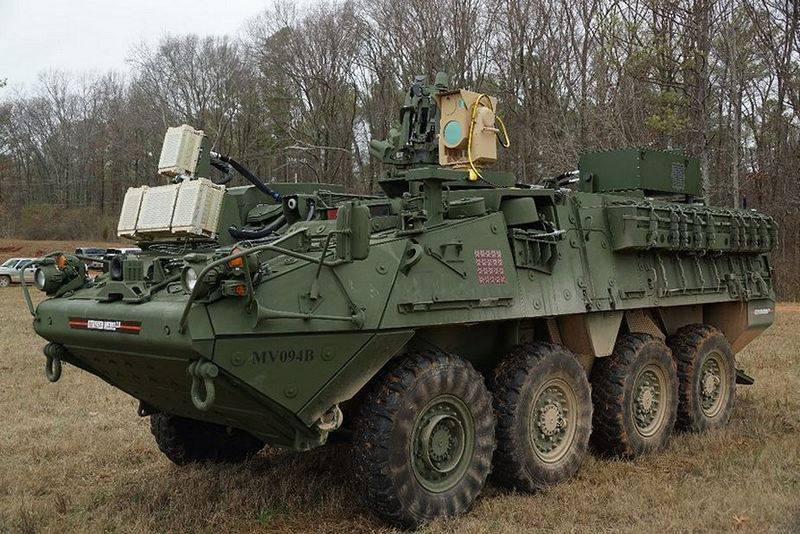 The Stryker MEHEL 2.0 armored personnel carrier arrived in Germany after a batch of Stryker Infantry Carrier Vehicle Dragoon (ICVD) combat vehicles and had already managed to participate in military exercises. The US Department of Defense points out that an experimental laser system will increase air defense capabilities, and will also make it possible to evaluate the capabilities of the Stryker MEHEL 2.0 in European conditions.

The Stryker with a combat laser system is being developed as an auxiliary air defense system and will complement traditional air defense systems. According to the military, using a laser instead of rockets will allow cheap and effective combat with small UAVs and other low-flying air targets.

For the first time, the Stryker MEHEL 2.0, developed by General Dynamics Land Systems, was presented at the AUSA 2016 arms exhibition. It was reported that the shown machine is equipped with a full set of tools for detecting and destroying UAVs, including a radar station, an electronic warfare complex, means of identification "friend or foe", as well as a 5 kW laser facility.