Oil Competition in Iraq: New Field of the Cold War between Russia and the West

March 19 2018
11
Part of the Cold War is rivalry for energy. In recent years, it has become particularly acute, including because the famous shale revolution in the United States in a decade and a half faces at least stagnation. Iraq is one of the places on the world map where the raw material interests of Moscow, Washington and London intersect. Russia got involved in fierce competition for Iraqi oil. 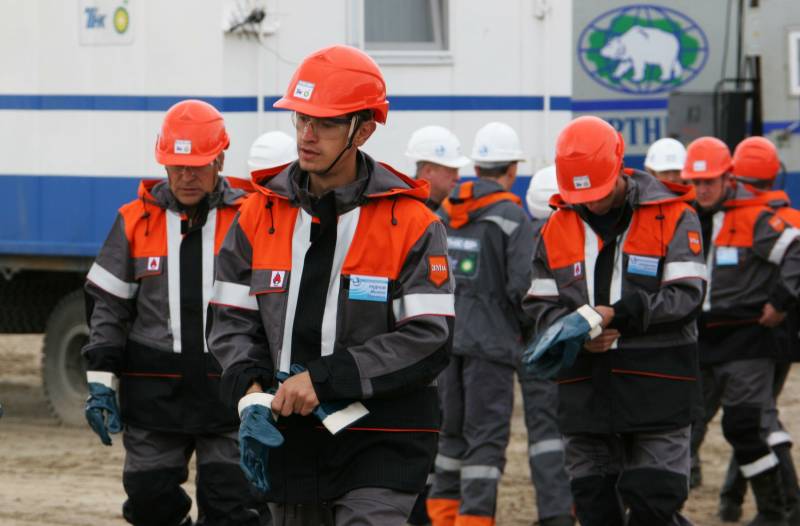 Last year, in December, victory was announced over the “Islamic State” (banned in Russia) in Syria and Iraq. The victorious statements were made by the USA and Russia. The votes of the winners were joined by Iraq, whose prime minister, Hyder Jawad al-Abadi, is also the supreme commander. Al-Abadi just proclaimed in Iraq "the final defeat" of terrorist forces, and at the same time declared himself the ideological inspirer historical victory over the IG. To his credit, he also puts the return of the rebellious Kurds into a relatively peaceful course of life. However, it was not without the assistance of other interested parties: Turkey and Iran. Nevertheless, the Iraqi army and the so-called people's militia actively opposed the Kurds. Soon, in May, parliamentary elections will be held in Iraq, and Haider al-Abadi has a chance to retain the prime minister’s chair and portfolio.

Whatever the results of the May parliamentary elections, the Americans will remain in the country. This issue is not discussed. One of the formal reasons for the preservation of American forces in Iraq is instability and the likelihood of the return of terrorism. One of the real reasons is Iraqi oil.

And not only Americans and Iraqis are interested in this oil. The oil issue of Iraq takes Russia.

The competition for the development of oil fields in Iraq is very tough. Russia has already realized that the United States and Great Britain, as well as the Kurds, have become its competitors. Iran is also a close local competitor.

All these potential “parties” are interested in the oil wealth of the territories located in the Kirkuk region.

What are the chances of sharing the cake and getting a fair piece from Russia?

At the end of last year, Iraq, at meetings with Russian representatives, suggested that Russia actively participate in the post-war reconstruction of the country and hold a special business forum. This told the correspondent RIA News" Iraqi Ambassador to Egypt Habib al-Sadr. He expressed hope for a "helping hand" in Moscow.

“We hope that Moscow will extend a helping hand to us in restoring the liberated regions,” he said. - Important meetings were held, they discussed cooperation in many areas, including the role of Russia in the period after IG. The Russian side welcomed the offer of Iraq to establish an Iraqi-Russian business forum. ” According to the ambassador, the cooperation "nothing hinders."

In those months it became clear that there would be a big struggle for Iraqi oil.

Oil resources in the Iraqi region of Kirkuk is an industrial goal for all forces in the region who participated in the war. Oil reserves in Kirkuk are estimated at 8 billions of barrels. This province has both an airport and a military base. Foreign experts from Europe have already recognized that there is a “territorial rivalry” of Americans, British and Russians in Kirkuk.

Russians, Englishmen and Americans started the race, which can lead to a “partition” of the oilfield territory: each piece will be controlled by several companies that will receive a certain “influence” there. Representatives of Iraq itself, the Kurds and "proxies" from Iran also do not want to stay at the mercy.

Iraqi troops advanced north of Kurdistan to the oil pipeline and border crossings to Syria and Turkey. Transition control is part of a general government plan.

Until now, the Kurdish regional government of M. Barzani controlled the only functioning export pipeline. This government is supported by US forces. According to the Washington Institute for Middle East Policy (WINEP), Kurdish-controlled refineries have reserve potential for producing oil, which the central government of Iraq lacks. However, as a result of the war, Barzani no longer has any influence. And in the future, the Kurds are threatened with the loss of the most important asset - a strong position in this oil region.

According to experts, we should not forget about the role of Iran. Indeed, even before last year’s attack on Kirkuk, the commander of the Iranian brigades, General Suleymani, called on Kurdish soldiers from the Peshmerga formations to leave Kirkuk. In addition to political issues, Kirkuk oil is a very important element for Iran, an OPEC member interested in maintaining high oil prices. Controlling Iran’s opponents over these oil fields would be a disaster for Tehran. This was reported to Reuters by “a close friend of the Iranian president,” Deutsche Wirtschafts Nachrichten.

However, Iraq is not going to give any one side to oil.

Immediately after the successful operation in Kirkuk, the Iraqi Oil Minister published an official statement in which he noted that the British oil giant BP could plan the development of Kirkuk oil fields. Later, the press office of the Iraqi Oil Ministry confirmed to the Financial Times that such a request was sent to BP.

Currently, Iraq’s Rumaila oil field is being developed jointly by BP, PetroChina and Basra Oil Company (BOC). According to BP, the oil reserves there amount to 17 billions of barrels.

After the attack on Kirkuk, the Russians also expressed their interests, Deutsche Wirtschafts Nachrichten writes. The Russian oil giant Rosneft declared its interests on 19 in October 2017: Rosneft agreed to acquire a 60-percent control stake in the Kirkuk-Ceyhan pipeline.

Recall that this oil pipeline, 970 kilometers in length, is the largest oil pipeline in Iraq. It connects the Kirkuk field and Ceyhan in Turkey.

Entry into the infrastructure project would be Rosneft’s way to achieve strategic goals and increase the efficiency of oil transportation to end-users, including deliveries to oil refineries in Germany, said Rosneft CEO Igor Sechin last fall. According to Reuters, Rosneft plans to invest 1,8 billion in the project. The company has invested in the region before: as of December 2016, its investments amounted to 4 billion dollars (data from the same Reuters agency).

However, the Iraqi Oil Ministry warns: all deals require the approval of the Iraqi central government.

Now about the Americans. Now they intend to strengthen in the south of Iraq. While Rosneft is expanding its presence in the north, the American oil giant Exxon plans to concentrate production facilities in southern Iraq, near Basra and Iran’s border regions. Iraq’s billion-dollar project and Exxon could result in the construction of oil pipelines, storage facilities and the supply of seawater.

With such a competition, one cannot say that Russia has succeeded in its undertakings. Despite visiting in December of Baghdad by Russian Energy Minister A. Novak, who sought to solve the accumulated problems of Rosneft, Gazprom and others, cooperation was hardly intensified.

Only at the end of February 2018 in Moscow a meeting of the intergovernmental commission on cooperation was held, at which the Iraqi side again asked to speed up the restoration of the power supply facilities. Russia, in turn, offered to purchase Sukhoi Superjet planes and equipment (from loaders to road repair machines). But no specifics are reported. Consultations will continue.

Later, the Iraqi ambassador to Russia, H. Mansur, said that the Prime Minister of Iraq agreed to accept Mr. Sechin in Baghdad against the background of the situation with Rosneft projects in Iraqi Kurdistan. About this Ambassador Haydar Hadi told RBC.

According to Hadi, the meeting was requested by Rosneft. It is curious that the representative of Rosneft, Mikhail Leontyev, said that the company was constantly in contact with Iraqi partners, but Sechin refused to confirm the fact of the trip.

There is an opinion that Sechin’s statement made after the events of October 2017 was not forgotten in Baghdad. Iraq and Kurdistan should solve their political problems themselves, Sechin said then. “I am not a politician, my business is to extract oil. We strictly observe the legislation in any zone where we work, ”he is quoted as saying. RBC.

It is known that the partner of Rosneft from the autonomy of the Kurds, the company KAR Group, has lost the right to work in the Avan and Bai Hasan fields in Kirkuk. The Iraqi Ministry of Foreign Affairs stated that negotiations on cooperation are conducted only through Baghdad, since the Iraqi constitution operates throughout the republic.

Later in February, 2018 recalls "Fund of Strategic Culture", Baghdad was visited by Rosneft Vice President Didier Casimiro. The press release of the Iraqi Oil Ministry briefly announced later that if the Russian company intends to gain access to the fields of Kirkuk, it should reach an agreement with the British BP and further coordinate with it.

Russia is still losing the competition for Iraqi oil. The Americans and the British are pushing, Baghdad is demonstrating intransigence, and experts are already talking about the impending “oil war” between Russia and the West.

In addition, if you believe projections The Energy Information Administration of the US Department of Energy (EIA), after fifteen years, the American oil industry will fall into stagnation. The cost of production will increase, the output will fall, as a result, world prices for black gold may jump. And the benefits of oil production in Iraq will be even greater.

The coming commodity standoff in Iraq will undoubtedly lead to geopolitical consequences and may further complicate relations between Russia and the West. The cold war is getting hotter.

Ctrl Enter
Noticed oshЫbku Highlight text and press. Ctrl + Enter
We are
Turkey against the Kurds. Is there a new phase of conflict ahead?Situational analysis of the death of the MH17 flight (Malaysian Boeing 777), made on the basis of engineering analysis from 15.08.2014
Military Reviewin Yandex News
Military Reviewin Google News
11 comments
Information
Dear reader, to leave comments on the publication, you must sign in.