Ambitious Russian project can give new impetus to space exploration

March 16 2018
156
One of the most ambitious Soviet-Russian projects in the field of space exploration is close to completion and is entering the stage of direct practical implementation. This is the creation of a megawatt class nuclear power plant. The creation and testing of such an engine can significantly change the situation in near-Earth space.


The megawatt class nuclear propulsion system (NESA) is a joint project of a group of Russian enterprises that are part of Roskosmos and Rosatom. This project aims to develop a megawatt class NPS. It is designed specifically for equipping a new spacecraft with the working title TEM (transport and energy module). The lead contractor for the project for the creation of the nuclear power plant is the FSUE “Keldysh Research Center” (Moscow). The goal of the ambitious project is to bring Russia to the leading position in the creation of energy complexes for space, with high efficiency and capable of solving an impressive range of tasks in outer space. For example, studies of the Moon, as well as the distant planets of our solar system, including the creation of automatic bases on them.

Currently, space flights in near-Earth space are carried out on rockets that are driven by combustion in their engines of liquid or solid rocket fuel. Liquid rocket fuel is divided into an oxidizer and fuel. These components are located in various tanks of the rocket in a liquid state. The components are mixed in the combustion chamber, usually with the help of nozzles. The pressure created by the work of the displacement or turbopump system. In addition, the fuel components are used to cool the rocket nozzle. Solid rocket fuel is also divided into fuel and oxidant, but they are in the form of a mixture of solids. 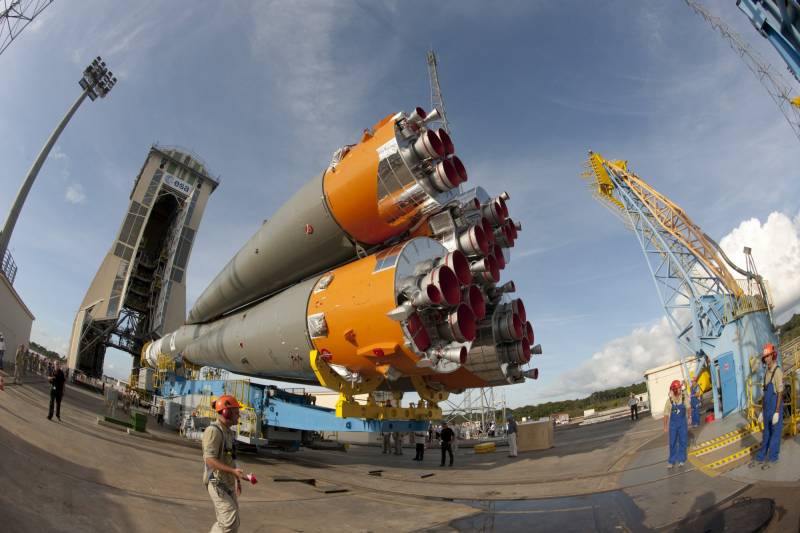 Over the past decades, the technology of using these types of rocket fuel has been worked out to the smallest detail in many countries. At the same time, rocket scientists themselves admit that the further development of such technologies is problematic. The former head of the Federal Space Agency of Russia, Anatoly Perminov, noted: “Roughly speaking, all existing rocket engines, whether liquid or solid propellant, are squeezed. Attempts to increase their thrust, specific impulse, are simply unpromising. ” Against this background, other technical solutions are of interest. For example, nuclear power plants that can provide an increase in thrust and specific impulse at times. Anatoly Perminov gave an example of a flight to Mars, to which you now need to fly 1,5-2 back and forth. With the use of a nuclear power plant, flight time could be reduced to 2-4 months.

Taking this into account, in Russia, starting from 2010, a project is being implemented to create a space transport and energy module based on a megawatt-class nuclear power plant, which has no analogues in the world. The corresponding order was signed by Dmitry Medvedev. For the implementation of this project before 2018, the federal budget, Roscosmos and Rosatom planned to send 17 billion rubles, 7,2 billion rubles from this amount was allocated to the state corporation Rosatom to create a reactor plant (Research and Development Institute of Power Engineering) Dollezhal), 4 billion rubles - Keldysh Center for the development of a nuclear power plant, 5,8 billion rubles - RSC Energia, which was to create a transport and energy module. In accordance with the new federal space program in 2016-2025, further 22 billions of 890 million rubles were planned for further work on the project.

All these works are carried out in Russia not from scratch. The possibility of using nuclear energy in space has been considered since the middle of the 50 of the last century by such prominent domestic specialists as Keldysh, Kurchatov and Korolev. Only from 1970 to 1988 years, the Soviet Union launched into the space more 30 reconnaissance satellites that were equipped with low-power nuclear power plants of the type Topaz and Buk. These satellites were used to create an all-weather surveillance system for surface targets in the entire water area of ​​the World Ocean, as well as issuing target designation with transmission to command posts or carriers weapons - systems of sea space reconnaissance and target designation "Legend" (1978 year). Also, in the period from 1960 to 1980, the year in our country was developed and tested at the Semipalatinsk nuclear test site, the TASS news agency reported. 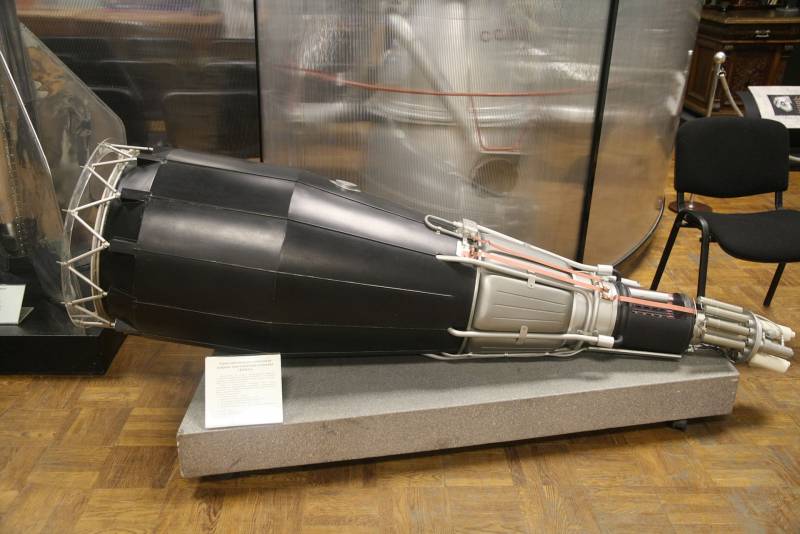 Nuclear reactor-converter "Topaz" (reduced layout)
Experts identify the following advantages of nuclear power plants:
- The ability to fly to Mars in the 1,5 month and go back, while the flight using conventional rocket engines can take up to 1,5 years without the ability to go back.
- New features in the study of near-Earth space.
- The ability to perform maneuvers and accelerate, in contrast to installations that can only accelerate, and then fly along a predetermined path.
- Reduced maintenance costs, which is achieved due to the high resource possible 10-year operation.
- A significant increase in the mass of the payload put into orbit due to the absence of large fuel tanks.

20 July 2014 was obtained a patent of the Russian Federation for the number RU2522971 for the “Nuclear power plant” (YAEDU), author Academician A. Koroteev. Later at the exhibition “State order - FOR fair purchases 2016”, which took place in Moscow from 23 to 25 in March , JSC “NIKIET” named after Dollezhal presented a model of a reactor facility for a megawatt class nuclear power plant. It is known that the nuclear power plant developed in our country consists of three main elements: a reactor installation with a working fluid and auxiliary devices, such as a turbo-generator-compressor and a heat exchanger-recuperator; electric propulsion system and a radiator radiator (system of heat release into space). Given the progress of work, it can be noted that the Russian Federation has every chance of first launching into orbit a spacecraft that will be equipped with a nuclear power plant.

It is planned that the model of nuclear power unit in the gland for testing will be created by the year 2019. And the first flights into space using a similar power plant will take place in 2020-s. Dmitry Makarov, director of the Institute of Reactor Materials (IWM, Sverdlovsk Region), told reporters as early as April of 2020 about the fact that the first flight tests of a nuclear space propulsion system were planned for 2016-s. Responding to questions from TASS journalists, he noted that in the near future, a ground-based prototype of this device will be created in Russia, and in 2020-s will pass the first flight tests in space. Such an installation of the megawatt class will allow the formation of powerful electro-nuclear engines that can accelerate interplanetary spacecraft to serious speeds. As part of the work on this project, Rosatom creates the heart of the facility - a nuclear reactor. 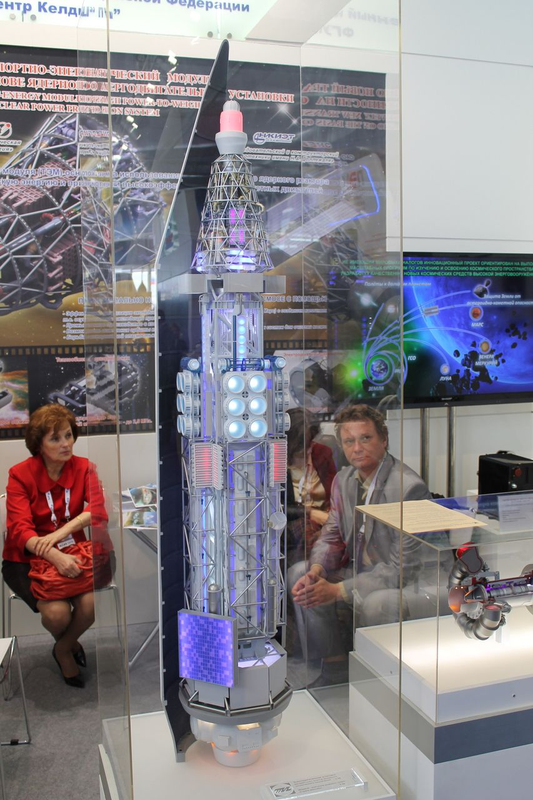 Model of a reactor facility for a megawatt class nuclear power propulsion unit
According to Makarov, the IRM successfully completed tests of heat-conducting elements (TVEL) for this installation, adding that full-scale TVELs that are planned to be used in such reactors were tested. Makarov has no doubt that, on the basis of the experience and competence of the Roskosmos and Rosatom institutes, it will be possible to create a nuclear power plant that will allow our country to reach not only the nearest, but also distant planets of our solar system. In fact, a platform will be developed through which it will be possible to implement serious research programs aimed at exploring deep space.

The development in Russia of a nuclear power unit carries the following practical benefits. First, this is a significant expansion of the capabilities of Russia and humanity in general. Spaceships equipped with a nuclear power plant will make the journey of people to Mars and other planets real.

Secondly, such ships will significantly enhance human activity in near-Earth space, giving a real opportunity to begin the colonization of the moon (there are already projects to build nuclear power plants on the Earth’s satellite). “The use of nuclear power plants is considered for large manned space systems, and not for small spacecraft that can fly on other types of installations using ionic engines or solar wind energy. It will be possible to use nuclear power plants on reusable inter-orbit tugs. For example, to move various loads between low and high orbits, to fly to asteroids. You can also send an expedition to Mars or create a reusable lunar tug, ”says Professor Oleg Gorshkov. Such ships are able to change the entire economy of space exploration. As RSC Energia experts note, the nuclear launch vehicle will be able to reduce the cost of launching the payload into circumlunar orbit by more than two times compared to missiles equipped with liquid-propellant rocket engines. 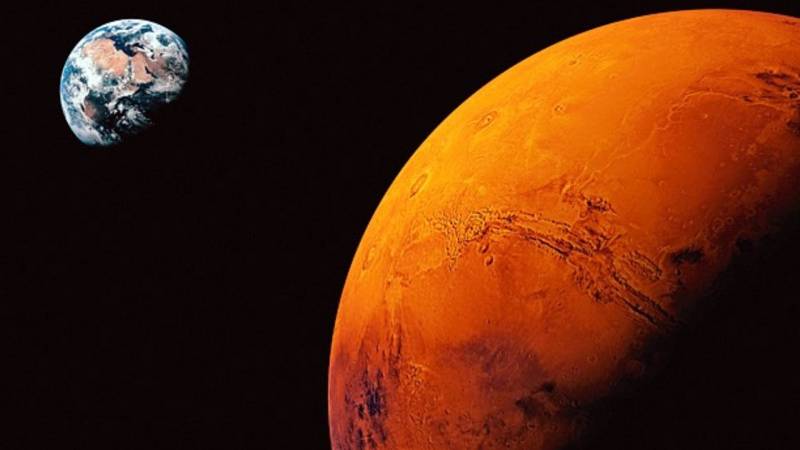 Thirdly, this development is new technologies and materials that will definitely appear during the project implementation. They can be implemented in other branches of the Russian industry - mechanical engineering, metallurgy, etc. This is a breakthrough project that, if successfully implemented, can give a new impetus to the Russian economy.