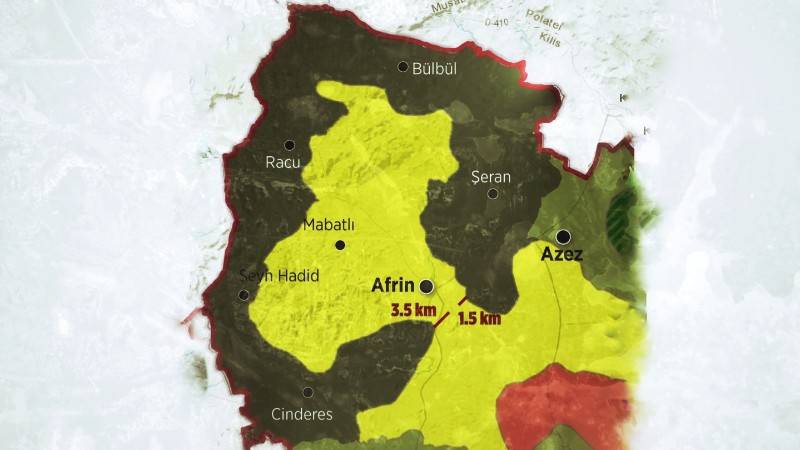 Since the beginning of the military operation "Olive Branch" conducted by the General Staff of the Armed Forces of the Turkish Republic in order to eliminate terrorist centers in the north of the Syrian Arab Republic (SAR) that threaten the national security of Turkey, more than forty days have passed. During this time, the Turkish armed forces, together with the opposition armed groups, established control over fifty percent of the territory of the Afrin canton; the entire border strip, strategically important heights, is occupied.

Also in the official statement of Ankara it is said about the liquidation of more than two and a half thousand “terrorists”. The Syrian opposition, (pro-Turkish), supported by the regular Turkish army, is rather slowly but surely approaching from different directions to Afrin himself. This campaign of the Afrin campaign is not at all accidental. Earlier, Turkish Prime Minister Binali Yildyrym announced four stages of the operation, the first of which ended in late February. At the moment, a large number of Turkish military equipment is sent to the frontline line, which may indicate the beginning of a new phase of the Olive Branch. To date, the Turkish regular units and their Syrian protégés are located five to six kilometers from Afrin. The leadership of Turkey in its public statements often emphasizes that the course of the operation will not be limited to Africa alone, but will be extended to other Kurdish regions east of the Euphrates. As it is known, the Kurds in these areas are supported by the United States, and the military aggression of the Turks in this direction may subsequently increase the already growing confrontation between Turkey and the United States.

The internal situation in Turkey is stable and does not experience any serious shocks. The need for an operation to protect the state borders of the republic at its southern borders is realized and supported by the majority of the population. The attention of the Turkish public is completely focused on the fighting in the south of the country. The military operation was announced by the authorities as a necessary measure to eliminate the terrorist threat emanating from the territory of another state and is a serious blow to Turkey’s national security. Such a message from the authorities to the Turkish people has become an excellent reason for the consolidation of society and is effectively used by the ruling regime in maintaining its authority in the domestic political arena. The topic of terrorism has become one of the most popular in the country, because for several years now Turkish society has been forced to confront the problem of terror. In the Turkish media, the state of the operation is described in a positive manner, great emphasis is placed on the statements of the official representatives of state power, each event during the operation is widely publicized. Also attention is paid to the interest of foreign representatives in the conflict. 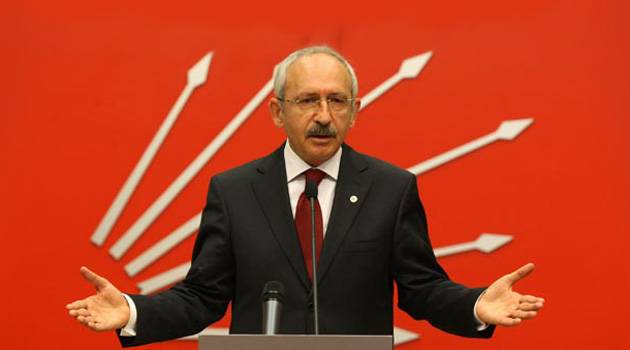 The opposition also made a united front, expressing support for the ruling regime in the fight against the terrorist danger. However, the support of the Chairman of the People’s Republican Party (NPF), Kemal Kilicdaroglu, was presented with great reservations about the methods of the antiterrorist operation. The leader of the Kemalists, criticized the solution of this problem by military means. CHP is the strongest opposition party in Turkey. Serious discussions began inside the party, which is reflected in the regular negative statements of its various members to the official authorities. The leader of the party, in one of his statements, noted that Afrin is not an easy goal and at first should have resorted to diplomatic mechanisms to resolve the current situation before entering troops and taking the city. The Deputy Chairman and the official representative Bulent Tezdzhan at a press conference at the headquarters of the NPP stressed the correctness and necessity of such a decision, however, for his part referred to the establishment of a diplomatic dialogue and its use in further negotiations.

The co-chairman of the Democratic Peoples Party (DPN), Selahattin Demirtas, was sharply criticized. This party (the pro-Kurdish) represents the interests of the national minorities of Turkey, so it can be said that it is in even more irreconcilable opposition to the AKP (in comparison with the NPP) - its tough policy towards the Kurds. In an interview with the authoritative Turkish edition of Cumhuriyet, the politician formulated his questions regarding the ruling party as follows: “Should people die for your seats, should people die for your sultanate?”. However, the other opposition Nationalist Movement Party (PND), led by Devlet Bakhcheli, whose loyalty to the ruling regime began to gain momentum after the well-known events of July 15 2016, fully supported the government line. In addition, the party leader criticized his opponents from the RPP due to their relative position on the upcoming operation. Turkish Prime Minister Binali Yıldırım, in turn, highly appreciated the support of the opposition and thanked his colleagues for their dedication to the common cause at such an important moment. 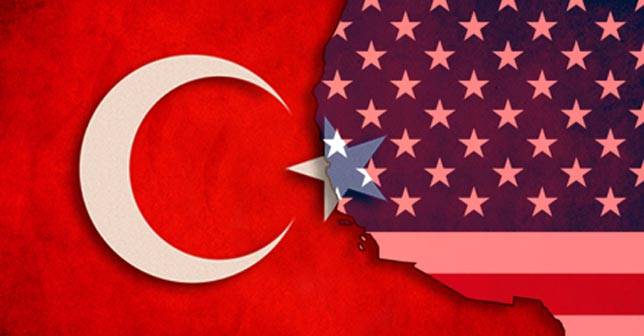 A significant factor in the current situation remains the state of Turkish-American relations against the background of the events taking place in the north of the SAR. After the almost final defeat of the Islamic State (a terrorist organization banned in the Russian Federation) on the territory of Syria, the United States began to strengthen its position through armament and additional support for the Kurdish national movements. However, serious contradictions between the two countries emerged after the statements of Colonel Thomas Vila, the head of the public relations department of the Operational Resolve operation (“Unshakable resolve”), that the US “are preparing the Syrian border security service from among the fighters of the predominantly Kurdish coalition.”

In turn, Turkish President Recep Tayyip Erdogan sharply criticized the maturing initiative of the American allies, stressing his full readiness to eliminate the Kurdish “terrorist” formations by direct military intervention. The Ministry of Foreign Affairs of the Russian Federation also expressed concern and the fallacy of the statements of the American side in connection with the decision to create "alternative forces" in Syria on the borders with Turkey, undermining at the same time the territorial integrity of Syria. Some time after the start of the Turkish operation on the territory of Syria, the US Foreign Ministry on the official website published a statement that additional support for the Kurdish armed forces is aimed solely at ensuring the safety of displaced persons and further hindering the return of the IG (terrorist organization banned in the Russian Federation) to these areas. The United States, feeling Turkey’s deep concern over its Kurdish policy, decided to reassure its Turkish partners of their full support in their fight against terrorism. However, it seems that this time the intentions of the Turkish leadership to strengthen their positions in the north of Syria and prevent the strengthening of the Kurdish elements on the southern borders of the country are serious enough, and to some extent coincide with the current political situation commensurate with the geopolitical realities in the region.

Ctrl Enter
Noticed oshЫbku Highlight text and press. Ctrl + Enter
We are
Ankara went to unexpected measures in an attempt to beat Moscow and Damascus. Commando and "al-Nusra" in Tayip's cunning planBonuses from the possible failure of the "Olive Branch": the United States is looking for tools to deploy contingent in the west of Aleppo
Military Reviewin Yandex News
Military Reviewin Google News
4 comments
Information
Dear reader, to leave comments on the publication, you must sign in.