March 16 2018
62
15 March 1990, the extraordinary Congress of People's Deputies of the USSR, then also called the “model of the indestructible bloc between communists and non-partisans”, elected Mikhail Gorbachev as President of the Land of Soviets. The first and, as it turned out very soon, the last. 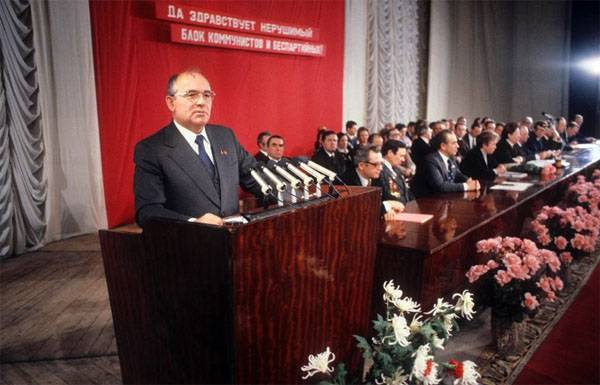 Perestroika gave a powerful slip. The Soviet Union was in a fever from interethnic conflicts. Store shelves are rapidly becoming empty. But the country has been confronted face to face with the greatest achievement of the Gorbachev era — a great friendship with the West.

Wide white-toothed smiles, friendly pats on the shoulder, the summit there, the summit here ... The country was falling apart before our eyes: the Baltic States, the Caucasus floated away under radical nationalist slogans, Central Asia broke away. In Russia itself (RSFSR) a wave of discord, poverty and chaos was rising. The country has lost the thread of foreign policy on the protection of interests on distant approaches. But Mikhail Sergeevich did it happen before that. Mikhail Sergeyevich had euphoria ...

After all, he has been courted by his fellow politicians from Europe and North America for many years now, and they have fought in all places, saying: “Mikhail Sergeyevich is correct! Right!"

Withdrawn troops from Afghanistan. Euphoria? - Euphoria. The Berlin Wall collapsed. Euphoria? - Well, of course euphoria. Especially when, Hans-Dietrich Genscher, Helmut Kohl, Douglas Hurd and others, others, others, shaking hands with Gorbachev, said something like the following: Well, you gave, Misha! .. We did not expect such a turn. They thought you were a fist on the table - hryas ... You thought, you would demand reinforced concrete documentary guarantees “in exchange” for the step of unifying Germany. And you, Michal Sergeyevich, well done! - did everything so that even it was difficult for us to hope. Then you go to the office for the Nobel Prize.

Well, of course, Misha, the friends approved. How can people be reminded of the bloody pages stories this party. Be you president! Just listen to the sound: pre-zi-dent! - chased, democratic, fresh!

And so, my friends, with the non-expansion of NATO? “You hurt, Mikhal Sergeyevich, everything was promised: they said, NATO will not expand, so NATO, as you see, does not expand anywhere. Our word, Michal Sergeich - granite, lump! And the fact that you believed us is just great. We ourselves do not believe in ourselves, and our people do not believe in us, but you believed in us — a worthy politician, ma la dez — take something else from the shelf. Credit? - you say. - Well, there will be a loan to you - all the same, you will not be paid - the descendants will pay off ... We’ll somehow wait, the interest is good - double-digit, in dollars.

Why all this "lyrics"? And to the fact that at the end of last year, the US National Security Archives at the George Washington University published a material that consists of numerous notes and notes related in one way or another to the “guarantees”, as it were, provided by Western partners of the then Soviet power elite. The material is called "NATO Expansion: What Gorbachev heard."

In enough bulk document it was quite frankly stated that, in fact, no one offered Gorbachev any guarantees, unless, of course, the statements in the series “Yes, we say to you for sure that NATO will not expand” will be considered guarantees.

European leaders, including Germans, British, and French, by and large, did not themselves believe that Gorbachev, without any “steep” requests, would agree to actually surrender not only the GDR, but the entire Eastern bloc. So, the note contained in the mentioned American archive is published, on which are the words of the then head of German diplomacy Hans-Dietrich Genscher. The note was transmitted to Washington through the American embassy in Bonn. Fragment of the text:
Changes in Eastern Europe and the unification of Germany should not be to the detriment of Soviet security interests. The East German facilities cannot be included in the NATO military structures. East Germany must have a special status in this context.

By the way, in the end, even a document was born - from 12 September 1990 of the year - which this pseudo-special status assigned to the former GDR.
The same Genscher from February 1990:
The Soviet Union should receive assurances that, if, for example, the leadership of Poland at some point leaves the ATS (Warsaw Pact Organization), then the very next day it will not join NATO.

This wording in words (this is the key word - ON WORD) was supported by the official London, which in the usual frankly deceitful manner through the mouth of the then Foreign Minister of Britain, Douglas Herd, declared: NATO will not move east to an inch.
Immediately, the wording was picked up by the US Secretary of State James Baker: Yes, yes, he says - Not an inch ...

From the material published by the US National Security Archive:
Not only the Soviet Union, but also other countries need assurances that if the United States maintains a presence in Germany within the framework of NATO, the current military jurisdiction of the Alliance will not move an inch to the east.

Then Gorbachev was asked: how does he look at the fact that after the unification of Germany, the American troops in the western part of it remain, they do not climb to the east, like the entire NATO infrastructure? And the general president replied:

Of course, no NATO expansion is unacceptable.

The most important note from the American archive with the words of James Baker:
It turns out that NATO in the current borders (at that time - author's note) - is acceptable.

This has actually untied the hands of the United States. Washington's frank draining of any "verbal promises" to Gorbachev by the then director of central intelligence (a prototype of the CIA) Robert Gates untied Washington's hands. If the secretary of state, who naively called the third person in the United States after the president and vice-president, still tried to declare that the Warsaw Pact countries need to block the very possibility of joining NATO, then Gates, seeing the crumbling USSR, made a different decision declaring something like this: “Guys, let's still not close all the doors to them (the“ socialist camp ”countries)”. And in fact, he did not deceive: at first, they kept the doors ajar, then they threw open wide, and only now they put a turnstile on them, so that only those who were really useful to NATO could enter.

Noteworthy in the published archival data materials relating to the position of the then official Paris. And then the French authorities were not yet servile at the American court. So ... Francois Mitterrand in May 1990, Gorbachev said the following thing: Friend, dear, you can listen to Americans, of course, but let's still think together: if everything goes to the fact that Germany is really uniting, dismantling the Organization Warsaw Pact, it is reasonable to raise the issue and that the military blocs were completely abolished.

That is, there was an unequivocal hint that Gorbachev could have put the approval of the merger of the Federal Republic of Germany and the GDR with the elimination of NATO.

However, as is well known, the future Nobel Prize laureate didn’t go at that. Officially, he was content with verbal guarantees of the security of the USSR and non-expansion of NATO.

But really, well, what kind of anti-state cockroaches in my head needed to be at that moment in order to pro ... uh-uh ...- to allow such an opportunity as mutually beneficial mutual liquidation of military blocs: Western NATO and Eastern OVD. It was quite worthy of the Nobel Prize. But ... NATO, as a military institution, has survived. And if, as the classic used to say, a gun hangs on the wall, then it will necessarily (according to the laws of the genre) shoot. And the shot ... It still burns so that the ears are laying.

Therefore, much can be said today on the topic: Mikhail Gorbachev was deceived by sophisticated Western combinators with their verbal promises, but only for the head of the world's largest state with a powerful army, branching by a network of special services, decades-old ideology is clearly not an explanation. In fact, there was a frank surrender of state interests. Let this be true with a beard, but the materials published by the Americans once again confirm this very fact.

Again - link on materials published in the USA. There is something to pay attention to.