The new Euro-Hitler will have the same "godfather" 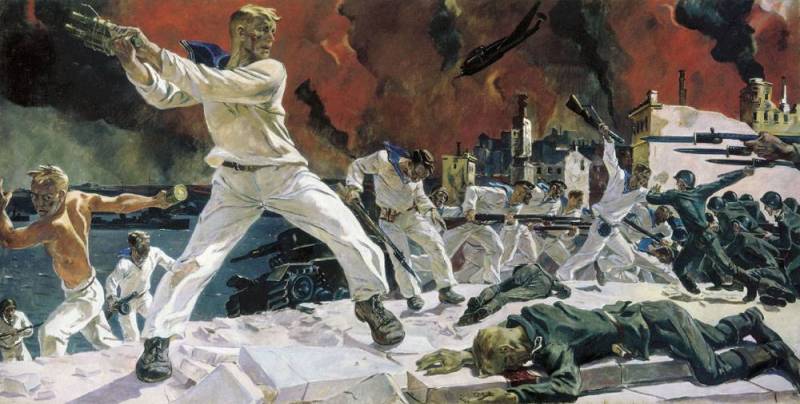 In connection with the current spring aggravation of Anglo-Saxon Russophobia, even if it has a purely pre-election tint, the question of who really is the main historical enemy of Russia and all Russians has again become topical. The notorious "cognitive dissonance" in this case lies in the fact that the Anglo-Saxons, with all their fair cunning and arrogance, almost always gave way to the palm in the bloody clashes with other nations with us. And they even managed to walk in our allies. As it was during the times of the biggest European wars, first the Napoleonic wars, and then the first and second world wars.

In the foreground, Germany has consistently acted as our enemy and offender, especially in the last hundred years. The Russians and Germans destroyed each other in such monstrous quantities that it is not surprising that this country was imprinted in our national mentality as the main historical enemy.

However, is this really the case? And are we not confused today, not taking fully the very serious, terrible and unchanging threat that exists for us for more than one century and the original source of which was and is by no means Germany?

For me, a man who was born soon after the next war with the Germans, it would seem that there should be a natural clear identification with the image of the main enemy of precisely “damned” Germany. In general, it was so. And all of our childhood war games have always been battles between “Russians” and “Germans.” And nobody wanted to be a “German” - the hatred towards them was so deep in us.

However, the years went by. I studied at the Faculty of History. And the “cold war” between the USSR and the West was raging in the world, in which Germany, recently defeated in the trash, played a far from main role.

It was then that our first doubts crept into our youth ideas about the “main enemy”. Soviet propaganda and the science of day-oriented historical science made certain amendments to the interpretation of recent events in world history, drawing our attention to the previously overly advertised role of our former allies in the Second World War, the United States and Great Britain, in unleashing this bloody drama. It was then, thanks to the works of many Soviet researchers of the pre-war period, that I had a rather harmonious picture of the events that had predetermined the military catastrophe in Europe.

And it was not a lightweight propaganda tale. Our scientists operated with fundamental, irrefutable facts. Among which was a mass of evidence of the most active participation of the Anglo-Saxon West, even against the interests of its official ally, France (!), In the accelerated economic and military reconstruction of Germany after its defeat in the first world war. I will not bore you with the appropriate texture - all this is described in detail in the scientific literature.

But especially eloquent were, of course, the Anschluss by Austria’s Hitler and the Czechoslovak Munich 1938 conspiracy of the year, during which it was Great Britain, with complete nonresistance of the United States and the doomed solitude of France, that gave the Nazi Third Reich the “green light” to territorial expansion in Europe. And she gave no apparent reason, because at that time the total military power of the Western countries could crush Germany without any difficulty.

Soviet historians have made a well-founded conclusion that Adolf Hitler’s Germany was no more than a tool in the hands of the West, designed to solve its main geopolitical task — to destroy the USSR, to eliminate the threat of strengthening the Soviet collectivist system alternative to Western egoistic capitalism, with incidental destruction of the entire Russian civilization as permanent carrier of such "subversive" ideas.

However, in the 90-ies the Soviet Union, with its politically incorrect point of view on world history, ordered to live long. In the Kremlin offices for a long time settled American-British "consultants-benefactors." And the topic of Anglo-Saxon responsibility for the fire of the Second World War again became irrelevant for as many as two decades. During this time, a new generation has grown up, which has already been processed in the spirit of "universal human values" and "unbreakable Russian-American friendship."

And only in the most recent years, when the Anglo-Saxon West began to show Russia its sharp teeth without any embarrassment, and then completely clung to them in a huge piece of the primordially Russian land, called Ukraine, re-emerged and went into growing doubts and perplexities about who is it actually a historical and unchangeable enemy of Russians and Russian civilization? And was not the same Germany, despite its immense self-conceit, just a simple tool in the hands of those who stood behind her and used the Germans in their own interests? Who skillfully directed their ambitions and focused the offenses actually inflicted on this country by the unjust Versailles world on the object that posed the greatest threat to the West from its point of view. That is, to Russia - then the Soviet Union.

Today, when we personally see how, through the efforts of the same Anglo-Saxon West, the next “ninth wave” of the most brutal Russophobia rises, turning into direct threats of a war against Russia, as with this end more and more ridiculous reasons are invented every day, It does not seem too surprising that in the late 1930s, the Anglo-Saxons managed to incite Hitler against Russia. Even though Germany itself, which had captured the whole of Europe by this time, the war with the Soviet Union, with which it had already agreed on everything and which, moreover, was much inferior in military and economic potential, was objectively not needed for nothing. The German defectors in June 1941, almost in one voice, told the Soviet command that at least half of the Wehrmacht soldiers were categorically against the war with the USSR, because they don’t understand why Germany really needs it. 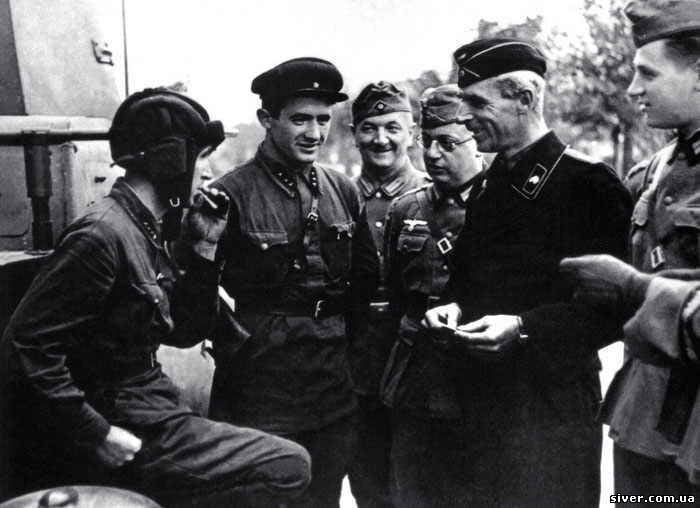 Brest. Autumn 1939 of the year. German and Soviet soldiers peacefully communicate and talk in a friendly manner during the events in Poland. Nothing indicates that they are burning with hatred towards each other and are ready to come together tomorrow in a deadly fight.

Those intrigues against Russia, which weave modern Anglo-Saxons with almost the same purpose, of course, take place in somewhat different historical and geopolitical scenery and therefore are not a literal repetition of the Hitler scenario.

But, at its core, this is all the same “good old” Anglo-Saxon meanness, the main purpose of which is to provoke a head-on collision of Europeans, led by the same Germans on the one hand and the Russians on the other. Today's Germany needs such a war with Russia even less than at the beginning of the forties of the last century. But this does not mean that she and the rest of Europe will not be pushed towards it. As a detonator of such a war, Ukraine is already being used, the policy which the involuntary Anglo-Saxons will, at a strictly definite moment, paralyze the entire energy supply system of the western part of the European continent and put the Europeans in a completely hopeless situation. The exit from which they will be kindly prompted by the same Anglo-Saxons - go east and take there everything you need, including energy.

There are only a few steps left to complete the implementation of this scenario. The first is already under steam. Kiev exposed the Russian Federation to such unrealistic conditions for further gas supplies, that their continuation became absolutely unprofitable for Russia and, in fact, impossible. The second stage is complete paralysis and disruption of alternative channels for the supply of Russian gas to Europe bypassing Ukraine. Germany is actively resisting this. But it is unlikely to be able to do it further in the conditions of artificially fanned anti-Russian hysteria. After that, a real energy crisis will arise in the European Union countries and the issue of getting out of it even at the cost of war will no longer seem something quite incredible.

At one time, the Anglo-Saxons put Hitler in about the same position in which he simply could not help attacking the Soviet Union. In fact, London and Washington gave him from the strength of two or three years to the final decision of the "Eastern Question", for which they fed him all of Europe.

The current European Union, with all its looseness and amorphousness, can be brought to the necessary condition by the same global players in approximately the same way. And this similarity is only reinforced by the fact that one of the main reasons for the attack of the Third Reich against the Soviet Union was precisely the seizure of its vast resources, which the rest of Europe was extremely poor. Since then, Europe has never become richer in resources. True, she is trying to get them from Russia on a completely good neighborly basis. How Hitler tried to do this at the time, concluding a large trade agreement with Stalin.

But Europe, alas, is not the mistress itself. And there is still no phone in it where you can call to learn about the course of European politics. But the course of the geopolitical world of Anglo-Saxony as it was, remained so. Like its fundamental principle - "Divide and rule!".

So, present-day Germany and other European societies have not a zero chance for the third time, in just one century, to become an instrument for implementing geopolitical, Russophobian, plans of the Anglo-Saxon West. Which, in turn, can also be a tool for global manipulation from quite dark forces, the true nature of which we can only guess.

However, sometimes these guesses for some moments become quite visible. As it happened, for example, in 1941, when one, undoubtedly, devoted to the secrets of this world, an American senator, who obviously later became the president of the United States, did not casually allow himself to voice something that he shouldn’t bring to the notice: “ Germany will win, we must help Russia. And if Russia will win, we must help Germany. And so, let the Russians and Germans, kill as many as possible! ”

This remarkably eloquent phrase should not be forgotten today. Especially those who continue to naively believe that Auschwitz, Khatyn and Babi Yar are only and exclusively a product of the gloomy “German genius”. And that, in dealing with supposedly more humane Anglo-Saxon nations, we can avoid all this.