Day of the submariner. How did the Russian submarine fleet begin

March 19 2018
50
March 19, Russia marks the Day of the submariner. This is a professional holiday of the submarine forces of the Russian Navy, as well as civilian personnel and everyone related to underwater the fleet.


In our time, the submarine fleet remains one of the most important tools for the defense of our country, an integral component of the nuclear shield. Submariners - the elite of the Russian fleet, the most complex and honorable naval profession. Meanwhile, a little more than 100 years ago, the submarine fleet was only taking its first steps in Russia. In memory of the events of those years, the date of March 19 was chosen to celebrate the Day of the seaman - submariner. This date is associated with a landmark event in stories Russian Navy. 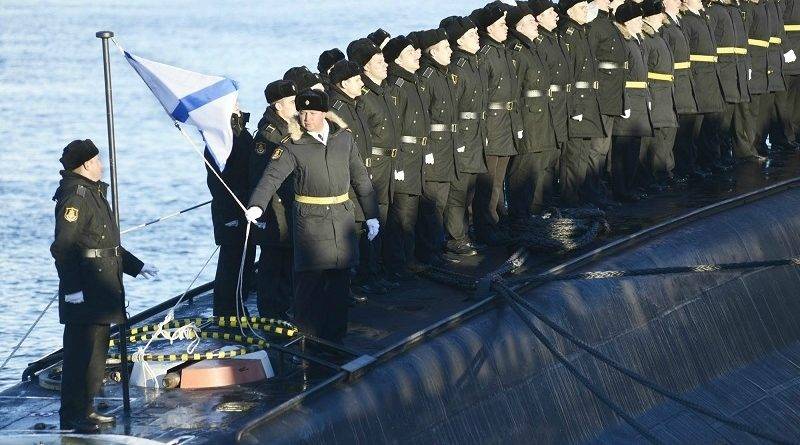 19 March (old style 6 March) 1906 of the year, 112 years ago, Emperor Nicholas II included a new type of ships - submarines - in the classification of ships of the Russian Imperial Navy. The order on the inclusion of submarines in the fleet was signed by the then naval minister, Vice Admiral Alexei Alekseevich Birilev. That was the beginning of the official history of the Russian submarine fleet, although in fact they thought about the possibilities of using submarines in Russia much earlier.

Back in 1718, the carpenter Efim Nikonov submitted a petition to Peter I with a proposal to build a “hidden vessel” that could suddenly attack the enemy ships. Peter I liked the idea of ​​Nikonov and he even summoned a talented artisan to Petersburg, where the shipyard began building a ship. However, with the death of Peter the development stopped. 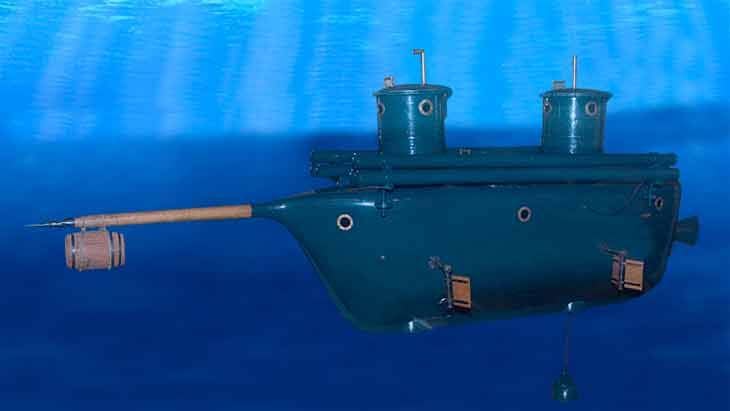 We returned to the theme of a submarine in Russia only in the 1834 year, when a submarine armed with special rocket launchers was built at the Aleksandrovsky Foundry to the design of a military engineer adjutant general Karl Schilder. The boat was moved with the help of four strokes arranged in pairs on each side of the boat, and they were actuated by the efforts of sailors-rowers. However, the speed of the underwater boat did not exceed half a kilometer per hour. Schilder had planned to translate strokes into electrical movement, but the current level of technological development did not yet allow this idea to be realized. As a result, in the 1841, the testing of the boat and the work on its improvement were discontinued, and the date of the creation of the submarine fleet in Russia was postponed again.

Nevertheless, it was in the Russian Empire for the first time in the world that mass production of submarines was established. Stepan Karlovich Drzhevetsky, a Russian engineer and designer of Polish origin, stood at its source. Coming from a wealthy and noble family, Drzewiecki received a technical education in Paris, where he met and became close friends with Gustave Eiffel, the famous author of the Eiffel Tower. Dzhevetsky's extensive knowledge attracted the attention of Grand Duke Konstantin Nikolayevich - the Russian governor in the Kingdom of Poland, who offered Stepan Karlovich to get a job in the Marine Technical Committee in St. Petersburg. During the Russian-Turkish war 1877-1878. Dzhevetsky voluntarily went to the Black Sea Fleet as a simple sailor, participated in the battle of the Vesta steamer with the Turkish battleship Fehti-Bulland, received the St. George's Cross for bravery. 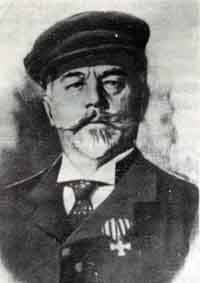 After demobilization, Dzhevetsky lived in Odessa, where he designed the first submarine built at the local shipyard with the money of the patron Theodore Rodokonaki. The second submarine was built according to the project of Drjevtsky in 1879, already in St. Petersburg, and its 29 was tested on January 1880 of the year at Silver Lake in Gatchina, in the presence of the heir to the throne, Grand Duke Alexander Alexandrovich. The heir to the throne was delighted and soon followed the order for the production of a whole series of submarines, which were to ensure the safety of Russian fortresses. In 1881, the boats were built and distributed among the fortress garrisons, but they were not used in battle. The low efficiency of Dzhevetsky's submarines led to the fact that in 1886, they were removed from service and no longer produced.

The next major milestone in the history of the Russian submarine fleet was the construction of the Dolphin submarine in the 1900-1904. The chief designer of "Dolphin" was a Russian engineer, Ivan G. Bubnov, in 1903 - 1904. supervised the shipbuilding drawing of the Marine Technical Committee. In March 1902, the "destroyer No. 113" was credited to the fleet lists under the name "The destroyer No. 150". In October, 1903 was enrolled in the Baltic Fleet, in 1904, it was transferred to the Far East to participate in the Russo-Japanese War, and on February 28, the submarine Delfin under the command of Georgy Zavoyko for the first time went to sea.

24 May 1904 of the Year The Russian Empire has signed a contract for the construction of three E-type (Karp) submarines for the needs of the Russian Navy, manufactured at the Friedrich Krupp shipyard in Kiel (Germany). Since Krupp promised to donate his first submarine to Russia in the event of a contract, 7 June 1904, the submarine "Trout" was transported by rail to Russia. She was accompanied by German officers who were supposed to train the Russian crew. In Russia, two torpedo tubes were installed on the boat, the crew was prepared, after which the boat was credited to the fleet as the destroyer Trout and August 25 1904 was transferred by rail to the Far East, where it became part of the Siberian military flotilla. "Trout" was the first real and valuable submarine of the Russian fleet in the Pacific Ocean.

Two more submarines Russian Empire acquired in the United States. So, 31 of May 1904 of the year was purchased by the boat "Fulton", designed by Holland-VIIR by John Philip Holland. As part of the Russian fleet, it received the name "Som". 18 June 1904 of the year, the American submarine “Protector” was adopted as a part of the Russian fleet, which received the new name “Sturgeon” in Russia. Submarine "Som" gave rise to a series of Russian submarines. In the Far East, a detachment of destroyers was formed from six submarines.

Naturally, the appearance in the Russian Empire of its submarine fleet demanded that the maritime command take appropriate measures to train personnel. First of all, it was required to train submarine commanders and officers. Already 29 May 1906 of the year at the naval base in Libau was created Training team scuba diving. His commander was appointed Rear Admiral Eduard Nikolaevich Shensnovich - one of the "founding fathers" of scuba diving and mine work in the Russian navy. 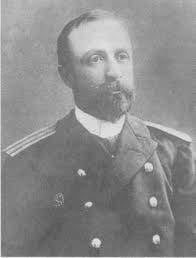 A graduate of the Naval School, Rear Admiral Shensnovich, went from a mine officer of a gunboat to the commander of the battleship, and then the youngest flagship of the Baltic Fleet. During the Russo-Japanese War, Captain 1 of the rank of Edward Schensnovich, who then commanded the battleship Retvizan, was seriously wounded, after which he returned to the Baltic Fleet. It was to him that Nicholas II and the Navy Department were entrusted to lead an unusual and very important area - the creation and strengthening of the Russian submarine fleet. It was on the initiative of Schensnovich that the first full-fledged base for submarines in the Russian Empire was created in Libava, and a special pool was built that could hold up to 20 submarines. Rear Admiral Shensnovich made a huge contribution to the development of the “Rules for sailing in the submarine fleet and the selection of people for service on submarines”, to the system of additional education for naval officers who were trained in the training detachment for service on submarines.

The first graduation of scuba diving officers took place in the 1907 year - the Russian fleet received 68 certified submariners. Only during 1907-1909. The training unit in Libau released 103 officer and 525 specialists of lower ranks for Russian submarines. Interestingly, in 1906-1911's. 12 maritime doctors, who also received the specialty of scuba diving officers, underwent training in the Libavsky detachment. From doctors, in addition to having a specialized medical education, they needed experience of serving on a ship by a doctor and a two-month experience of sailing on a submarine during their studies. As we see, the training of submariners in Libau was approached quite thoroughly.

For Russian sailors, at first, submarines were something outlandish, but this rather aroused interest in the submariner's profession among officers and non-commissioned officers. In those early years, the service of submariners was very heavy, not going to any comparison with the service on an ordinary ship. The technical features of the then submarines could not provide a comfortable performance of service, but this did not frighten the heroic sailors who were trying to try themselves in the profession of a submariner. During the voyage, the officers of the submarine slept in a small mess-room, and the lower ranks slept right on the mines to hold mines. 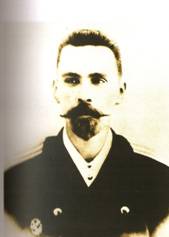 25 February 1911 was the first in Russian history brigade of submarines consisting of two divisions, and the brigade was headed by Rear Admiral Pavel Levitsky, who replaced Rear Admiral Eduard Schensnovich as commander of the Scuba Diving Training Unit in Libava. Levitsky was a hereditary sailor, served all his life in the navy, participated in the Russian-Japanese war as commander of a cruiser, and then commanded the Scuba diving training detachment.

The pace of creation of domestic submarines intensified before the First World War. So, already in 1912, at the Baltic Shipyard, a diesel submarine “Bars” was launched, armed with 12 torpedo tubes, 2 artillery guns and 1 machine guns. After the outbreak of the war, 1915 and 1916 were in service. The Baltic Fleet received 7 Bars-type submarines and 5 American Holland submarines, which were acquired in the United States but assembled at a Russian shipyard. During the First World War, the submarine fleet was fully used. So, the listed boats made 78 combat trips, sinking 2 cruisers and 16 enemy transport ships.

At the same time, it is unlikely that the submarine fleet could boast in the Russian Empire with particular love from the admirals and the Navy Department. For the most part, Russian admirals brought up by the “old school” favored cruisers and battleships of the surface fleet, believing that they deserved more attention than inconspicuous submarines. The importance of the submarine fleet was understood and recognized by a few devotees, like Rear Admiral Shensnovich, but there were not so many such officers in the naval command. Only World War I, which gave submariners the opportunity to truly show what submarines are capable of and what role they will play in the modern naval war, contributed to a change in attitude to the submarine fleet from the naval command. However, in 1917, the February and then the October Revolutions occurred, seriously affecting the position of the Russian fleet and the domestic shipbuilding industry.

The most difficult conditions of service, constant risk, being away from home for many months, the need to master the most modern and difficult equipment perfectly - all this requires from officers and warrant officers and sailors not only great abilities, professional knowledge and excellent health, but also unprecedented psychological stability. The service in the submarine fleet of the Russian Navy is not for nothing that it enjoys such prestige - both military personnel and even people completely distant from the army and navy understand the whole significance of the submariners for the country, and the volume of difficulties and hardships they face.

On this momentous day, “Military Review” congratulates all submariner sailors - admirals, officers, warrant officers, foremen and sailors, submarine veterans, as well as civilian personnel and their family members on the Submariner's Day. Eternal memory to the submariners who died and left this world, long life, good health and lack of combat and non-combat losses — to submariners and veterans who do not work.