Expert: Russian heavy armored vehicles have not been tested in Syria

March 15 2018
23
The Ministry of Defense of the Russian Federation tested a large number of models of military equipment in Syria. Some models for the ground forces, such as Tanks T-90A, BMPT Terminator, armored cars of various models, writes Messenger of Mordovia. 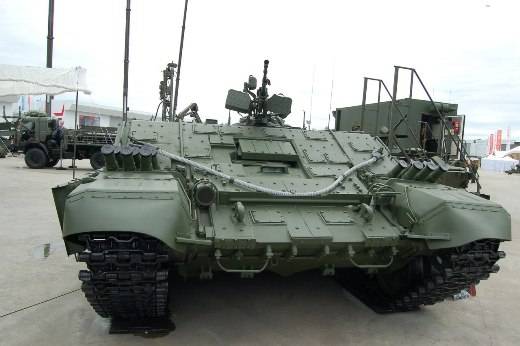 “According to military experts, in the Middle East it would be nice to test the concept of using heavy armored personnel carriers and armored infantry vehicles made on a tank base. Since it is still too early to send equipment on the Armata platform to real battles, the BMO-T combat vehicle carried out on the chassis of the main battle tank T-72B could play the role of a heavy infantry fighting vehicle, ”said Dmitry Meleshko, the author of the publication.

He notes that the car is well protected - “on the frontal projection, the built-in dynamic protection“ Contact-5 ”is mounted, there are powerful side screens with built-in“ reactive armor ””. According to the author, they are much more effective than those on T-90A and are well protected against anti-tank weapons.

However, he believes that it is necessary to install a remote-controlled machine-gun installation on the armored vehicle. Currently in Russia there are several models of such installations.

“As a result of the modernization, an armored vehicle capable of transporting 7 motorized infantry units, which is sufficiently well adapted to Syrian conditions, would appear. The experience gained will definitely come in handy when creating a new generation of equipment, ”concludes the author.

Ctrl Enter
Noticed oshЫbku Highlight text and press. Ctrl + Enter
We are
The escalation path in the Novorossia theater is back in force. Memo to counter Ukrainian T-80BVArmata can become a base for BMO-2
Military Reviewin Yandex News
Military Reviewin Google News
23 comments
Information
Dear reader, to leave comments on the publication, you must sign in.