Will the skeletons talk from the Theresa May political cabinet?

March 17 2018
23
Permanent Representative of Russia to the UN Vasily Nebenzya called the high-ranking members of the British government "the collective inspector Lestrade" - a stupid detective from Scotland Yard from Arthur Conan Doyle's stories about Sherlock Holmes. It happened on Wednesday at a meeting of the UN Security Council, which, at the request of the UK, discussed the poisoning of the former GRU officer Sergei Skripal and his daughter Yulia. The event has grown to the scale of a world scandal. 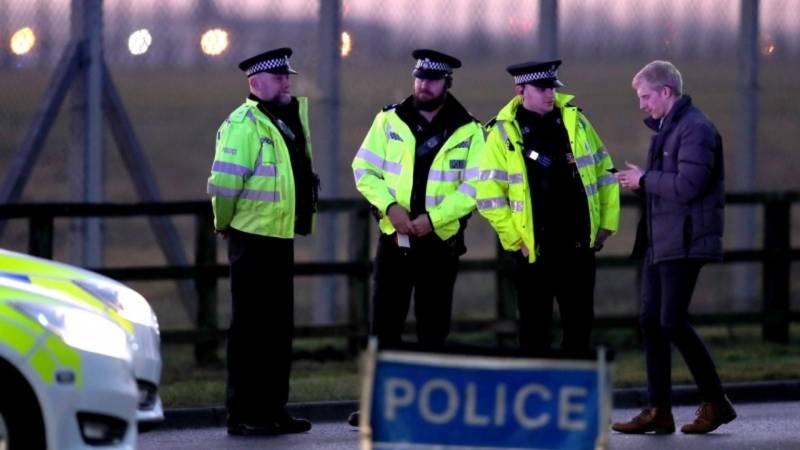 Trail of the British Premiere

Many considered the statement by a Russian diplomat for a bright polemical move. Moreover, Nebenzya argued his scathing comparison of the British cabinet with an unlucky detective of the similar nature of the charges - the surface of assessments, lack of evidence and, ultimately, irresponsibility.

As we remember from the literature, the thoughtful and meticulous detective had to refute the hasty conclusions of Inspector Lestrade. Vasily Nebenzia specifically made a reservation that he could not "suspect modern employees of Scotland Yard of being unprofessional. Although today's modern Sherlock Holmes would not hurt. "

Not only the high-ranking Russian diplomat doubted the professionalism of the current British detectives. The press in London has long been replete with publications about the "flaws" of the local department of internal affairs. Most often they write about the violence of "those who come to a halt" over British minors.

This infection has received not only widespread, but also a certain consistency. Every now and then in different cities of the United Kingdom (Roterem, Newcastle, Neweme, Rochdale, Oxford, London, Telford), gangs of Asians are identified, forcing British girls (in the assessment of criminals - "white trash") to engage in prostitution.

In this shameful business with the use of juvenile sex slaves, people from Pakistan and Bangladesh make millions of people. The British police know the problem, but do not give it proper value. They explain this for the most part by the fact (it is impossible to suspect such a democratic country of corruption!) That the police do not initiate criminal cases for fear of passing for racists or xenophobes.

For the first time a scandalous topic received a public sound in 2014 year. Then, human rights activists published a report on the situation in the English city of Roterem, which is part of the Sheffield metropolitan area. Pakistan gangs are operating there. Human rights activists estimated that in 16 years in the city they raped and involved in prostitution more than 1,4 thousands of white girls between the ages of 11 and 15.

At the time of the publication of the report, Theresa May was the UK Home Secretary, now well known as the head of the British Cabinet. May did not show much activity. The problem was poured in the media, let off steam and calmed down to new scandalous stories.

One of them received publicity this year. The network of pedophiles, whose victims were more than a thousand children, opened in another British city - Telford. This network has operated since the mid 80-s of the last century. For decades, "immigrants from South Asia, migrants in the first, second or third generation" raped British underage girls. The police and local authorities knew about this, but did not react at all.

It is noteworthy that the “Telford network” was opened not by the police, but by journalists. The media stunned the British with blood-chilling facts. For example, the brutal massacre of criminals over teenage girls who tried to resist them. Three victims in Telford burned alive, several were stabbed to death. It was with the Minister of the Interior, Theresa May.

The British were determined to have a public discussion of this. stories, but there was a poisoning of Sergey Skrypal and his daughter. Theresa May family drama inflated to the level of international scandal. In his shadow remained the drama in Telford, which has not yet received a real public assessment.

Will the secret be revealed?

But the case with Skripalem returned attention to the stories of the mysterious death in the British Isles of other famous people, whose affairs were secretly recorded by Minister May at the time. Three of them recalled on the occasion of the official representative of the Russian Foreign Ministry, Maria Zakharova. She noted that so far the society has no clear picture regarding the death of Boris Berezovsky, Alexander Litvinenko and Alexander Perepilichny.

Yvette Cooper, head of the British parliamentary interior committee, expanded this list to 14 people. True, Cooper's motivation is somewhat different. She is looking for new accusations for Russia and demands that Amber Rudd, the head of the Ministry of Internal Affairs, investigate "14 deaths that the British police did not consider suspicious, but which, as far as we know, the US intelligence services are considered potentially related to the Russian state."

This is without taking into account the Litvinenko case, with which Cooper, apparently, everything is clear and understandable. In addition to Berezovsky and Perepilichny’s list, two more former Russians - Igor Ponomarev (Russia's permanent representative at the International Maritime Organization, died in London on the eve of the meeting with Alexander Litvinenko) and Yuri Golubev (one of the founders of the Yukos oil company and long-time partners of Mikhail Khodorkovsky) were found dead in his london apartment).

The rest of the person - almost entirely British, little-known in Russia. These are Stephen Moss, Stephen Curtis, Daniel McGrory, Gareth Williams, Paul Castle, Robbie Curtis, Johnny Elichaoff, Scot Young, Matthew Puncher and the notorious Badri Patarkatsishvili. Most of them are united by cooperation with Boris Berezovsky or Alexander Litvinenko.

It seems that MP Yvette Cooper, Scotland Yard (by the way, from 2010 to 2016 years, which accounted for the majority of mysterious deaths, led by Teresa May) did not clarify the cause of death of these people. Here is a businessman, Scot Young. In December, 2014, he fell out of the window of an apartment located on the fourth floor of a house in central London.

The apartment belonged to Yang's girlfriend. The body of the businessman was found "strung on the pins of the metal fence of the building." Scott Young helped Berezovsky to withdraw money through offshore trusts to Britain, then covered up the deals of a runaway oligarch in Moscow and London. He was, as they say, in the subject of all the affairs of Berezovsky, but he did not survive much of his partner.

Young's relatives immediately noticed the media that “some of the circumstances of his death may indicate an outside intervention. For example, all the street surveillance cameras at the time of his death were directed to the other side. ” In Scotland Yard, their suspicion was not denied.

Only added even more fog. They say that sources in MI-6 with reference to the American special services made it clear that "Yang's death may be connected with Russia." Why Russia needs this, they didn’t explain to the police and, under the plausible pretext, put the brakes on it as a suicide.

Even before the death of Scott Young in different years, his friends and business partners Paul Castle (in November 2010 of the year), Robbie Curtis (in December 2012 of the year) and Johnny Elichaoff (in November of 2014) committed suicide (according to the police). The May Office was not looking for answers to these tragedies, confining itself to an unofficial leak: these guys "got into trouble, making risky deals with gangsters connected with the Russian mafia."

Similar reasons and excuses to the police can be found in the tragic history of almost all the people who are now included in the list of "mysterious deaths" by the chairman of the parliamentary committee Yvette Cooper. We note, by the way, neither Theresa May, the then Minister of the Interior, nor the deputies and politicians tore their hair at hysterics about the untimely death of their compatriots and the death of teenage girls at the hands of pedophiles.

Meanwhile, the British society already had to have questions about the quality of the work of their police, how it investigates resonant deaths. Experts explain the low efficiency of Scotland Yard for two reasons. One of them is in pathological British greed.

New york news Internet media company BuzzFeed interviewed 17 current and retired employees of the US and British intelligence services. The publication wondered why the British authorities "did not make sufficient efforts to investigate these episodes and to prevent new attacks."

The answer surprised. It turns out that the whole thing is London’s fear of "losing the billions of pounds coming in from Russia every year." In addition, the short-sighted policy of Minister May. She was fascinated by the budget savings of the police and reduced it to 2,3 a billion pounds, and Scotland Yard is not working for free.

Meanwhile, another death of a fugitive Russian happened in London. On Tuesday night, March 13, Nikolai Glushkov, a 68-year-old Nikolai Glushkov, was found dead in his house, one of the companions of the late Boris Berezovsky, convicted in Russia for fraud. Glushkov did not believe in Berezovsky’s suicide. Now there is no faith in the "quiet death" of Glushkov himself. Local media write that there are signs of forced suffocation around the neck of the deceased.

The flaws of the British investigation create a wide field for manipulating public opinion. The case of Scripal poisoning is a clear confirmation of this. Therefore, it is not soon that the secret in London stories will become apparent, and the skeletons in Theresa May’s political cupboard will show her true relevance.

Ctrl Enter
Noticed oshЫbku Highlight text and press. Ctrl + Enter
We are
Bitter thoughts of the West. Will Russians poison Donald Trump and Theresa May?Odessa, 2 May. We remember and remember ...
Military Reviewin Yandex News
Military Reviewin Google News
23 comments
Information
Dear reader, to leave comments on the publication, you must sign in.