On the edge of the abyss… 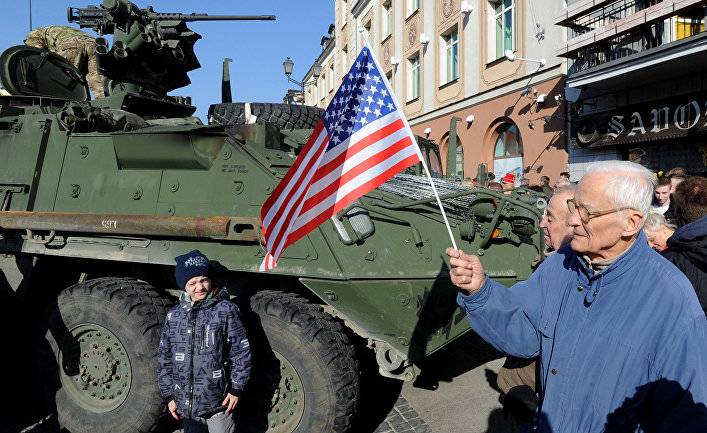 The military-political leadership of the member countries of the North Atlantic Alliance is louder and louder about the likely conflict with Russia. The European public has consistently been convinced that Moscow’s main intention is to seize the Baltic countries and Poland, and in order to confront the perfidious enemy, it is necessary to increase spending on the army and expand the military infrastructure.

In this regard, the New York Times calls the militarization of Eastern Europe the most significant US military move since the end of the Cold War. However, this significant step is not only military, but also political, of which the most influential American edition, of course, is silent, arguing only about "deterring possible Russian aggression in Europe."

The most active initiative for locating and expanding the presence of US troops and heavy weapons in Europe, including nuclear missiles, is supported by a pro-American group: the United Kingdom, Poland and the Baltic countries. They are trying with all possible forces and means to show that militarization will strengthen the security of the “Old World” from the “Russian threat”. In fact, the strengthening of the American military presence only strengthens the dependence of European allies on Washington, and the risk of slipping into war from an arms race only increases.

The military budgets of Poland, the Baltic countries, Romania, the Czech Republic and other countries from the former socialist bloc, as well as other NATO member countries in Eastern Europe, are strictly growing, as is the way, the infrastructure of military facilities and the number of foreign troops in their territory are expanding.

Thus, according to the law on the allocation of 2% of GDP for defense in Poland, size of the military budget this year will be about 10,3 billion euros, which is a billion more than in 2017 year. A significant part of the funds will be allocated for capital expenditures (about 27%), including the expansion of the military infrastructure in the east of the country, designed to receive and deploy NATO troops, create bases weapons and ammunition, weapons and military equipment.

There is an increase in spending on ensuring the daily life of the troops (in 2018 year - more than 1,8 billion euros, in 2017 - 1,6 billion), which is associated with a significant increase in the intensity of operational and combat training. It's no secret that the amount teachings near the borders of Russia and Belarus will double, and the number of participants in the maneuvers, as can be seen in the example planned in Poland “Anaconda-2018” - three times.

Needless to say, Poland and the Baltic countries are fatally dependent on EU financial investments. At the same time, the governments of the countries of Eastern Europe are investing, collected in the form of payments, taxes and other budget revenues, in the destruction of themselves, as there is an increase in the combat potential and the construction of military infrastructure. The concepts of an external enemy, naturally in the person of Russia and its allies, are imposed on the population of Eastern European countries. Against this background, expenditures on health care, culture, education, and other socially significant sectors are significantly reduced.

For example, in Poland, the “500 + Family” program is a monthly funding of about 120 euros (500 Polish zlotys) for the second and each subsequent child is depreciated every year, and its purchasing power is expected to decrease twice during the years. The program was presented to the public as an incentive to increase the birth rate in the country, but statistics show that at the end of 10, a thousand fewer children were born less than in the same period of the previous year, and the situation does not change.
In order to avoid mass outflow of the population in Latvia, which is the leader in terms of population decline in the European Union, the state plans to pay an allowance of € 11,38 for each child. However, this amount is so insignificant that it is not enough for even a pair of shoes.

I would like to mention another vulnerable category of the population - the elderly. Currently, about half of retirees in Eastern Europe barely make ends meet.

Against this background, new military infrastructure is being built, and multimillion-dollar deals for the purchase of weapons are being concluded.

The level of outrage and distrust of governments is rising. The political leadership of Eastern European countries is balancing between the demands of Washington and the possibility of internal protests. States actually lose their sovereignty.

However, common sense dictates that Europe should act in the interests of its citizens, working to ensure that the EU does not become a victim of some American malady.

It would be desirable to hope that common sense will prevail in the confrontation of the pro- and anti-war forces. Progressive public organizations and movements have a huge amount of work to do to clear the minds of Europeans from the ideology imposed on them and the superiority of the dictates of power.

Ctrl Enter
Noticed oshЫbku Highlight text and press. Ctrl + Enter
We are
What you didn't want to know about EnglandInterview by President Bashar Al-Assad to the Sunday Times
Military Reviewin Yandex News
Military Reviewin Google News
19 comments
Information
Dear reader, to leave comments on the publication, you must sign in.