The most expensive helmets. Helmet Crosby Garrett. Part one

March 25 2018
32
Archaeologists always hope to find ... a treasure. Well, or not a treasure, but something very valuable, even if not necessarily golden. And they are really lucky. In Egypt, they found a golden coffin and the mask of Pharaoh Tutankhamun from gold of a high weight 10,5 kg, and everyone seems to know this. But the fact that several masks similar to “tutankhamenova” have been found, they know, alas, mostly specialists. Not everyone knows about the silver coffin of Pharaoh Psusennes I and his mask, although it is no less an excellent example of ancient Egyptian art. However, the discovery was made in 1939, when war was raging all over Europe and people just had no time for archeology. They find pots with coppers and arrowheads, find silver hryvnias (one such settlement found at Zolotarevsky, we had to hold in our hands ... a strange feeling), and a lot of other things - tons, tens and hundreds of tons of very different metal and stones. So, when someone begins to assert (drunk or foolish, I really do not know) that all this is buried in the ground specifically to ... distort history, This is ridiculous. It is not worth this hard work for the manufacture of all these products of the meager results that we end up with. And it is much easier to enrich descendants if you put money in a reliable bank. 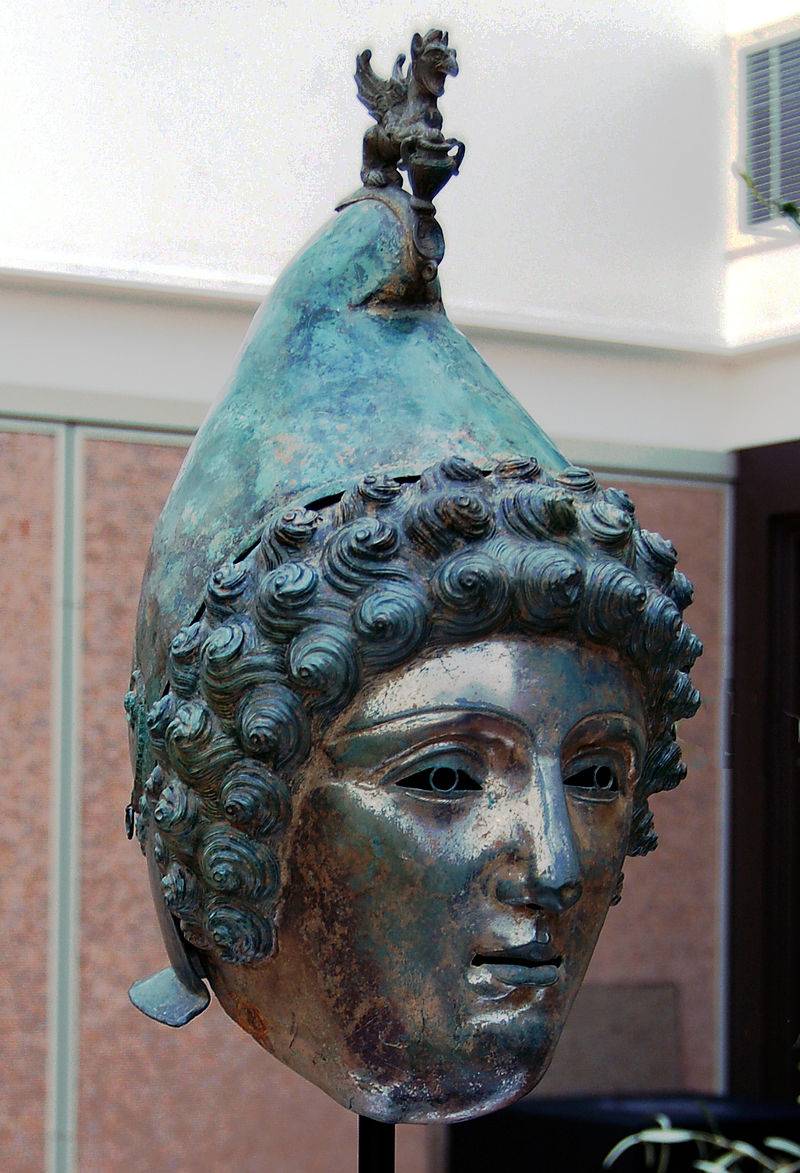 Although, yes, it also happens that people find unique items just where no one expects to find them. However, not quite. We have never found a Roman helmet near Nizhny Novgorod, but quite a lot of them have already been found in England, and why this is so hardly needed to be explained. And today we will tell just about the finds of the most expensive ... helmets. And almost all of them are made in England, although unique and expensive (from a financial point of view, as well as from a historical one!) Helmets were found in other places. Well, one should begin, of course, with the discovery of the most expensive helmet in history, called “Crosby-Garret helmet”.

This is an ancient Roman helmet, made of copper alloy and belonging to the time of manufacture of approximately I - III century of our era. This helmet was found in May 2010 by a local resident with a metal detector in Crosby-Garret in Cumbria, England. Apparently, this is not a combat helmet. Most likely, it was intended either for some ceremonies, or for participants of the paramilitary equestrian games "hippika gymnasium." This is supported by the fact that such helmets have already been found here and this one is the third one.

But the most important thing is still not the case, but the fact that 7 of October 2010 of the year “Crosby-Garrett helmet” was sold at Christie’s auction for a fantastic amount of 2,3 million pounds sterling (3,6 million dollars) to a certain anonymous buyer by… phone. And, by the way, who this man is still unknown!

And it was so that many residents of England at the first opportunity buy their own metal detector and bypass with it their own possessions, as well as public fields and forests in search of antiquities. And since on the land of ancient Britain whom and what did not exist, quite often they are accompanied by luck. So it was this time: the helmet was discovered by a private search engine, who also wished to remain anonymous, with the help of a metal detector on the farm pasture territory, owned by a certain Eric Robinson, in the Crosby-Garret area. The fact that in these places were located some ancient Roman settlements or camps, nothing was known. But then an ancient Roman road passed through these places, which led to the northern border of Roman Britain. This road had an important, one might say, of strategic importance, and if so, then it was possible to assume both a significant military presence and the movement of military forces in these places in the distant past. That is, the Roman legions marched north to it and galloped cavalry, including Sarmatian cataphracts, and here they could easily make their own camps.

The find was not a whole helmet, but 33 large and 34 small fragments, and most likely, it was wrapped in cloth and placed face down. Since there were no Roman settlements, as they say, it can be assumed that the helmet was buried in the ground at the moment of danger that threatened its owner. But, nevertheless, he still had time to bury him! However, it is quite possible that now thorough archaeological research will be conducted here. However, when will it be? This is only still being said.

As already mentioned, from a long stay in the ground, the helmet collapsed heavily, with the result that it was a set of different fragments from 67. But the auction house Christie hired restorers, who restored it in its previous form. It is believed that since the restoration was carried out before the helmet was provided to the British Museum for scientific expertise, it is possible that important information regarding the origin of this helmet was lost. On the other hand, the examination confirmed the main thing, namely, that this is not a fake. Interestingly, some fragments of the helmet bear the traces of white metal, which suggests that the entire helmet was completely covered with white metal "under the silver." 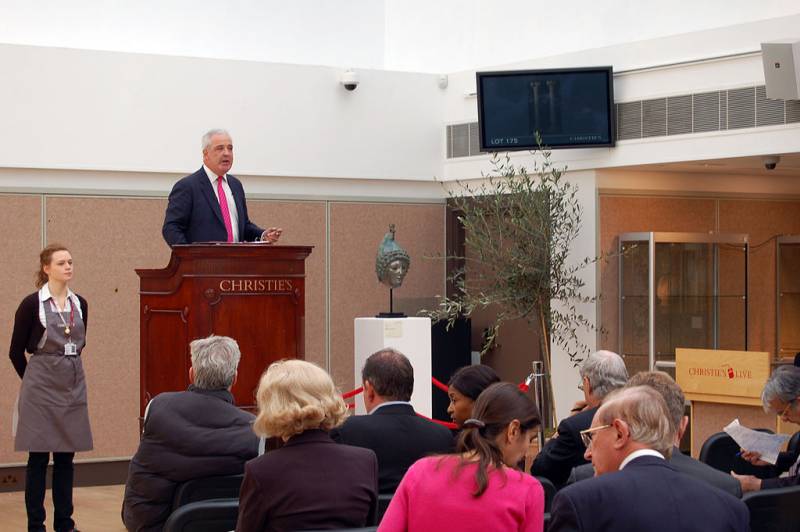 After the restoration, a typical cavalry helmet of the Roman cavalier was used, which were used during the hippika gymnasium games. The appearance of a helmet with a mask was the head of a young man with curly hair and in a Phrygian cap. At the pointed top of the helmet was a winged sphinx, which was quite unusual for this kind of helmets. It is possible that the mask and helmet depict the god Mithra, whose cult was popular among Roman legionnaires in the 1st-4th centuries. n er

If the helmet were officially recognized as a treasure, then a long bureaucratic procedure for its examination would begin, and the state museums of England would receive the priority right to buy a helmet from an amateur archaeologist, due to which the amount they would pay to the helmet finder and landowner. he was found, could not be so great. But since museums did not receive such rights, the helmet was sold at 7 on October 2010 for 2 281 250 pounds sterling ($ 3 631 750), including an auction commission, and an anonymous buyer who placed bids on the phone. The amount of sale of the helmet significantly exceeded the preliminary estimates of its sale: most experts believed that the amount of 200 - 300 thousand pounds would be quite sufficient, and the assumption that the helmet would be bought for 500 thousand pounds was considered too bold. 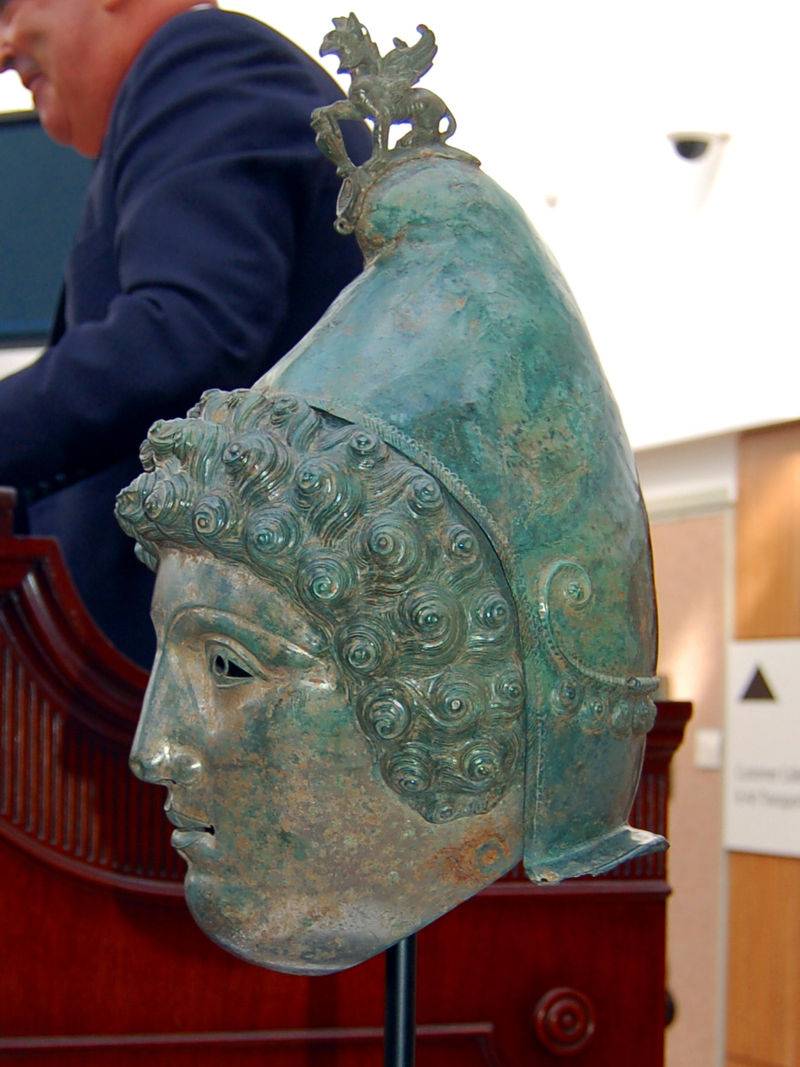 The Tully Museum of Carlisle suggested starting a fundraiser in order to buy a helmet for them and place it in his exposition, that is, leave it in the county where it was found. One of the patrons said he was even willing to donate one pound for each collected public pound. Thus, it was possible to collect more than 50 000 pounds, plus 50 000 came from an anonymous patron, that is, more than 100 thousand pounds - a huge amount in total, to which was also added a special grant of 1 million pounds from the National Heritage Fund . But ... even such means were not enough and the helmet went into private hands. The museum offered the buyer to place a helmet in the museum at least for a while, but these negotiations did not bring any success.

All these events provoked a lively discussion in England about the treasure law and the assessment of its conformity with possible situations. By law, it turns out that five silver coins of the XVI century, which cost only 50 pounds, are subject to the law on treasures, and although museums do not need these coins, they nevertheless have a priority right to buy them. But the value like "Crosby-Garrett helmet" they can not buy due to lack of funds. In addition, the staff of the Tully Museum, as well as a number of officials called on the government to ban the export of a helmet from England.

In general, it’s great that there are still places on earth where such finds are possible at all, but what’s important is that in the country where they take place there would be laws worked out in this area!