How to fix on samurai sashimono? Part one

March 24 2018
48
The problem of identifying their own and others on the battlefield has always been very serious. At the beginning of the “epoch of chain mail” in Europe, for example, people came out onto the battlefields, dressed in gray-red armor from head to toe, almost all of them were the same, and how could anyone recognize this mass? In the battle of Hastings in 1066, William Bastard (known as William the Conqueror) had to take off his helmet so that the warriors could recognize him, and Count Eustace pointed his hand at him and loudly shouted: "William is here!" 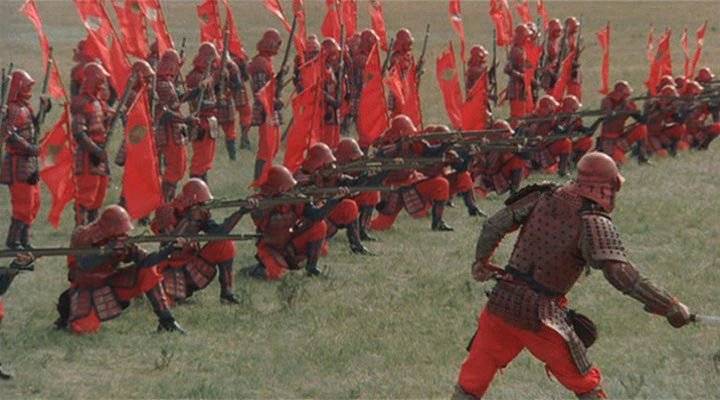 That is why shortly after that, the knights appeared coats of arms, and after them a whole science - heraldry, which can rightly be called "shorthand stories". She served primarily the needs of military affairs and why this is understandable. And in Japan, heraldry was even more widely spread than in Europe. Indeed, for centuries, Japan was a military community, the civil war lasted for five centuries there, and it is hardly surprising that the Japanese learned to distinguish their troops from the enemy by the symbols they know. Even more important than in Europe, in Japan was the individual personification. After all, the samurai was awarded for ... the heads of his enemies cut off. And the nature of the award, and its size entirely depended on the identification of a particular head (unknown heads were not particularly needed by anyone), and on the rank of the one who got it. It was also necessary to confirm from eyewitnesses who could witness the feat of the person representing the head. And in all these cases it was simply impossible to do without identification marks. 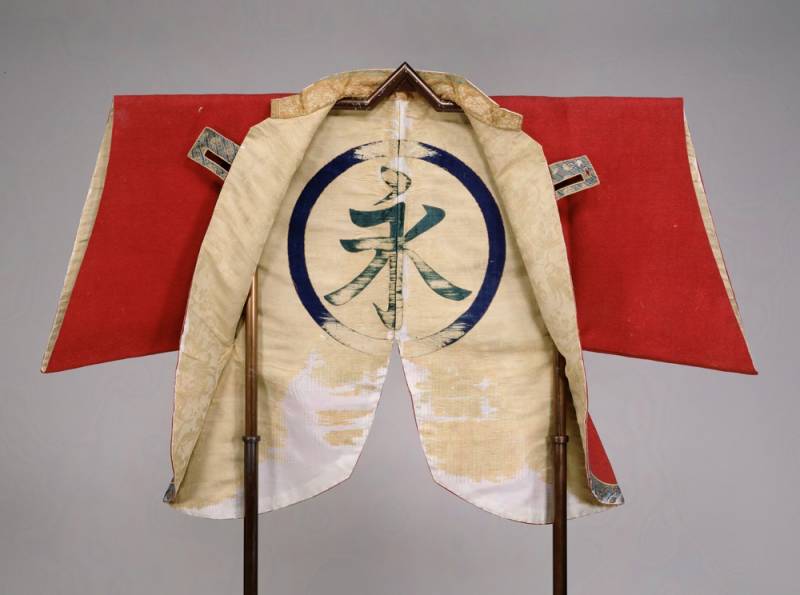 Jimbaori is a “daimyo jacket” (or “battle coat”), which was taken to be worn in a combat situation. It belonged to Kabayakawa Hideake (1582 - 1602), the famous "traitor from Mount Matsuo." Front view. (Tokyo National Museum) 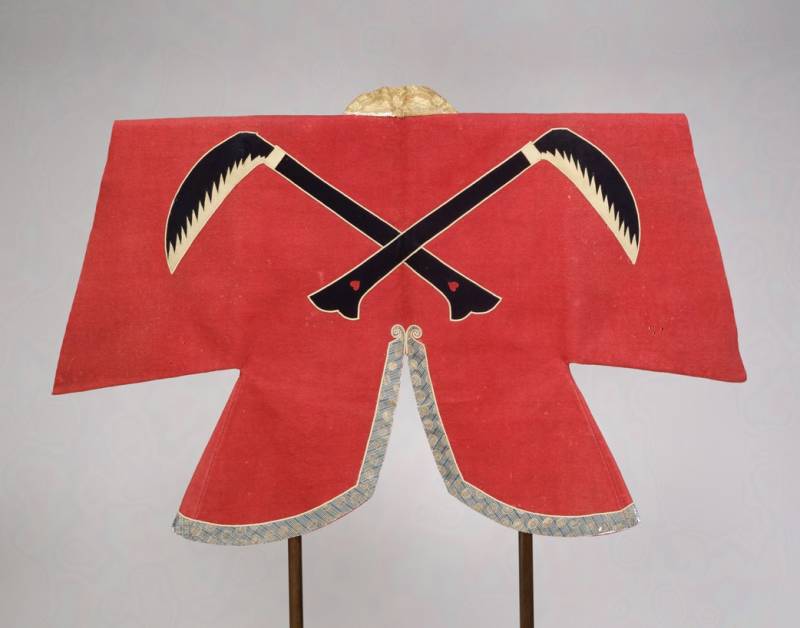 Heraldic signs were used to gather troops on the battlefield. And also for giving signals. Another thing is that the Japanese, unlike the Europeans, have never kissed their banners and did not swear at them. That is, they were not a shrine in the Middle Ages. The thing is important, but purely utilitarian, like horse-stirrups, they thought. They could even be thrown over the wall of the stormed castle, that is, in essence, given to the enemy. They say that our flag is already there, we climb behind it and bravely cut heads! 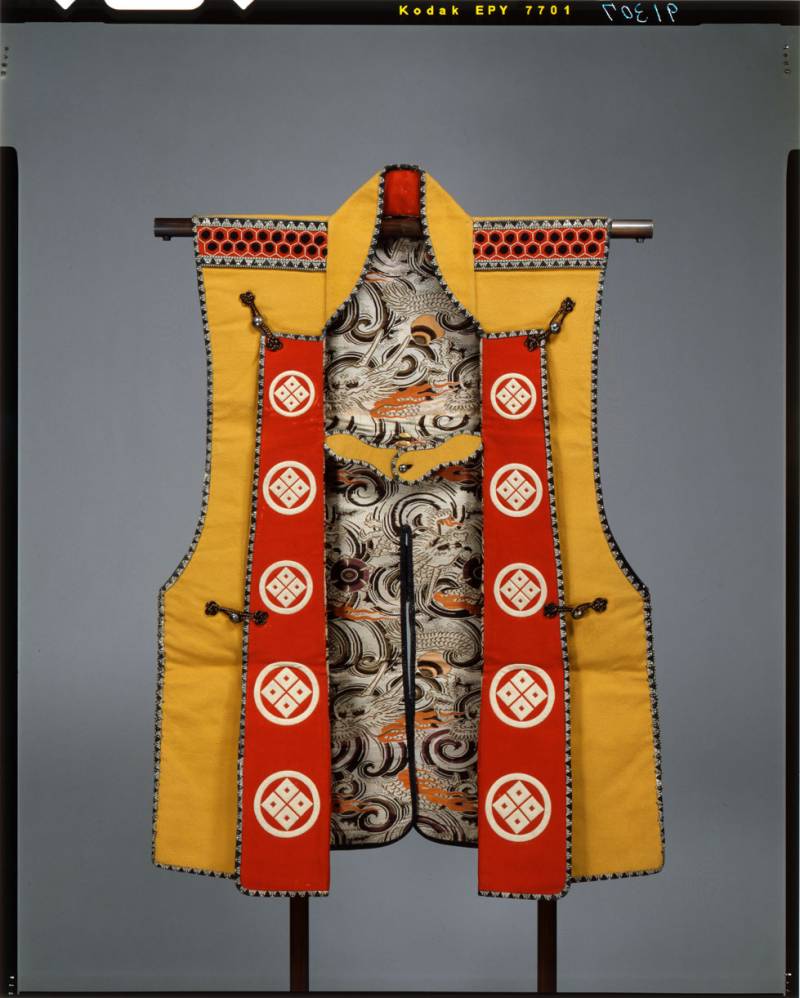 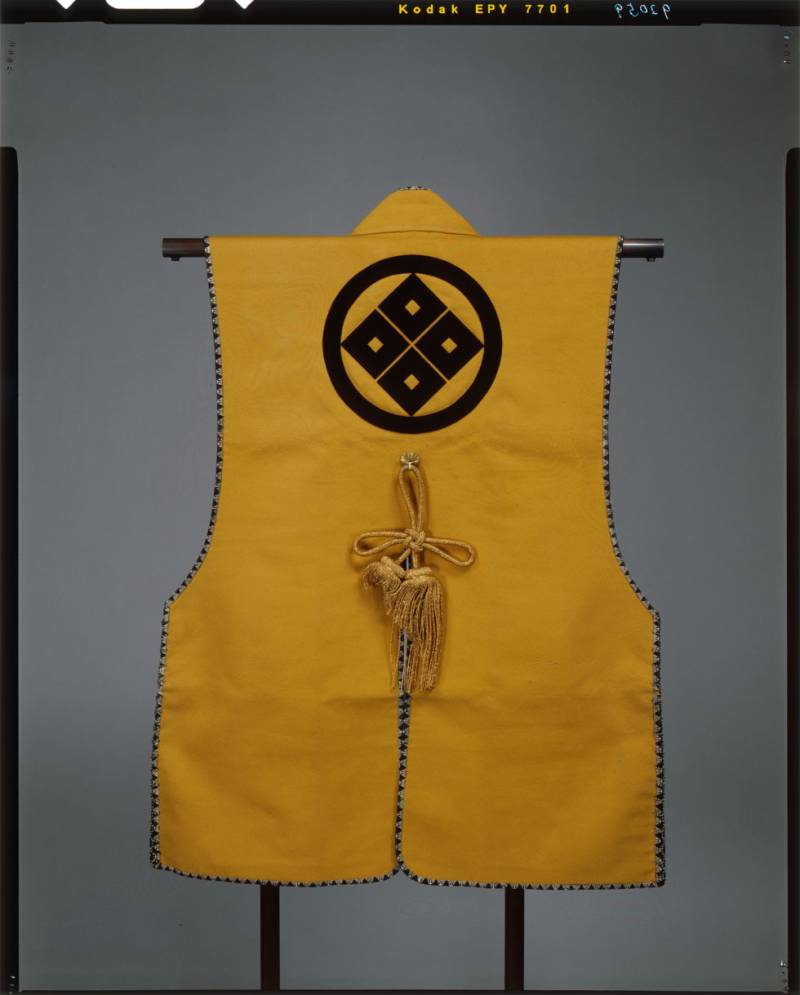 Recall that at the heart of Japanese heraldry lay Mon - a very simple but elegant sign, which was visually remembered much easier than the colorful, but complex European emblems. Monks were usually drawn in black on a white background. Any other color solution was not forbidden, but ... these two colors were the main ones. Mones were depicted on samurai banners (though not always), on their weapon, saddles and clothing. 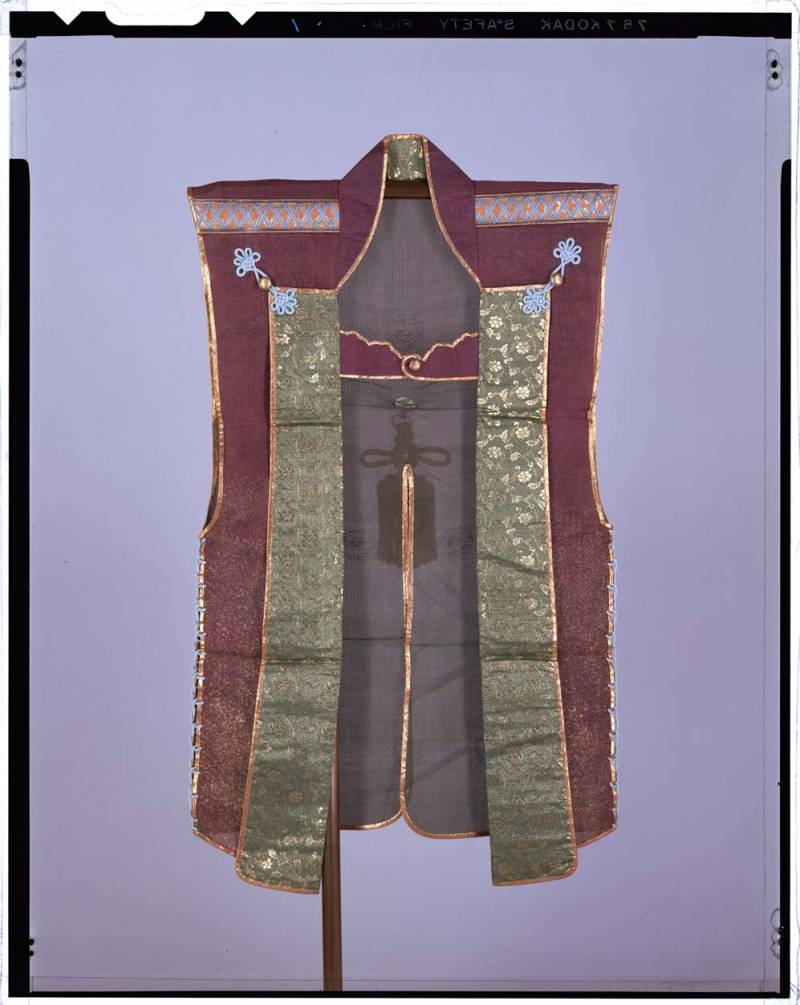 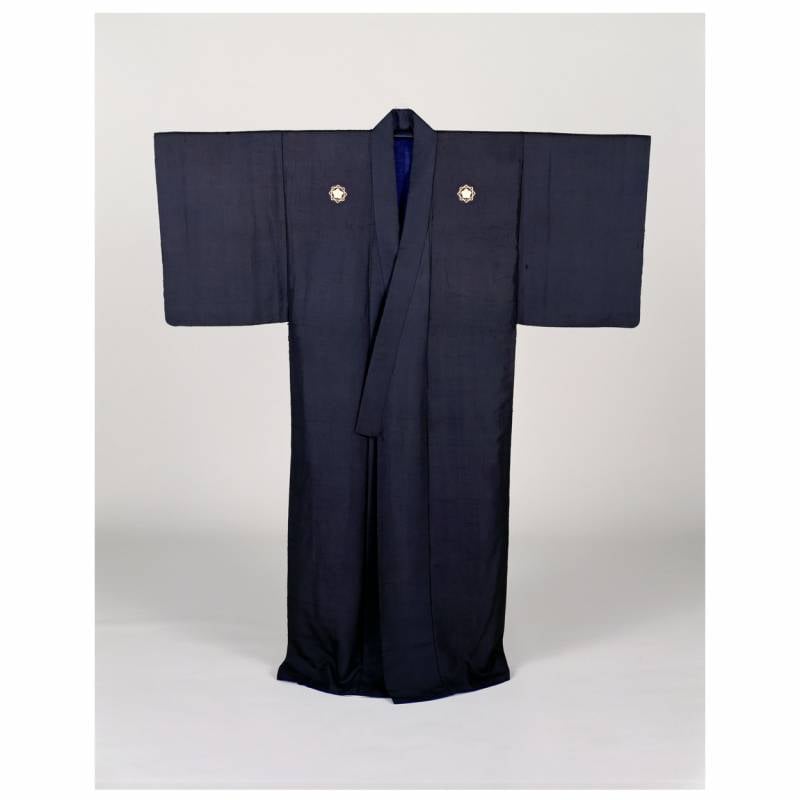 Plain kimono with coats of arms. Belonged to the legendary hero of the Japanese "perestroika" Sakamoto Ryoma.

It should be noted, however, that the famous Jinbaori - sleeveless jackets that noble samurai wore over their armor, monks were depicted, but ... not always. It also happened that they were sewn from brocade or were rich in embroidery, but they did not carry any official stamps on themselves. 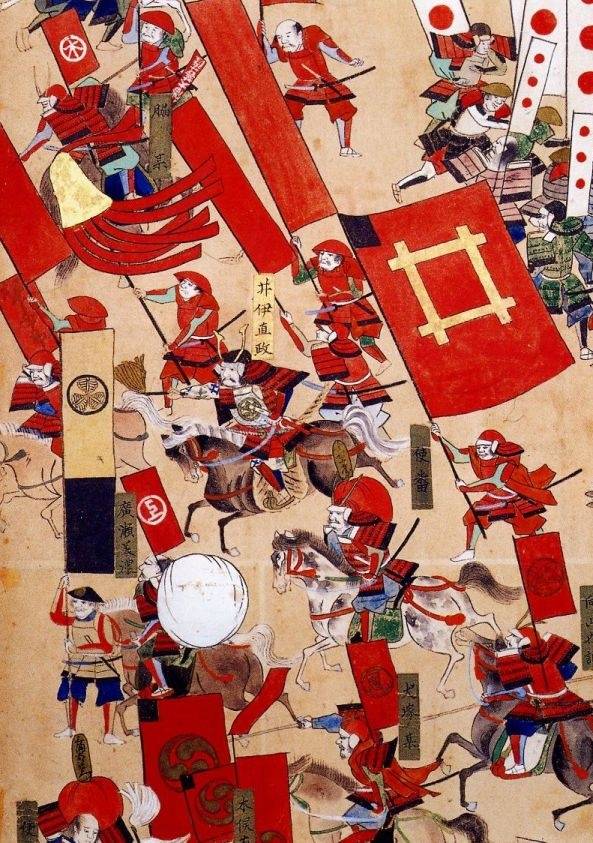 "Red Demons" - the warriors of the clan Yi in the battle of Sekigahara. Fragment of a painted screen. As you can see, there were a lot of flags in the samurai army. Both big and very small. And if in the West, knights in battle were distinguished primarily by the emblems on shields, by embroidered horse blankets and pennants, in Japan identification was carried out by flags.

Interestingly, the first battle flags of the era of the first emperors, which they presented to their commanders, were sheets of yellow brocade. It is known that the imperial mon - 16-petal chrysanthemum, was already known in the period of Nara 710 - 784. That is, long before the appearance of the first emblems in Europe. 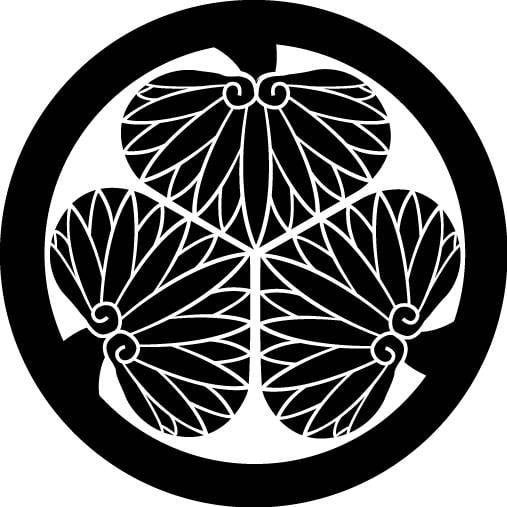 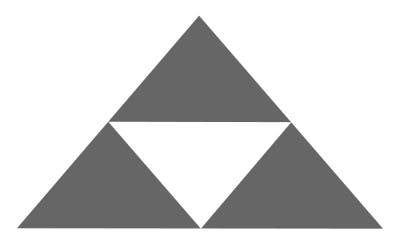 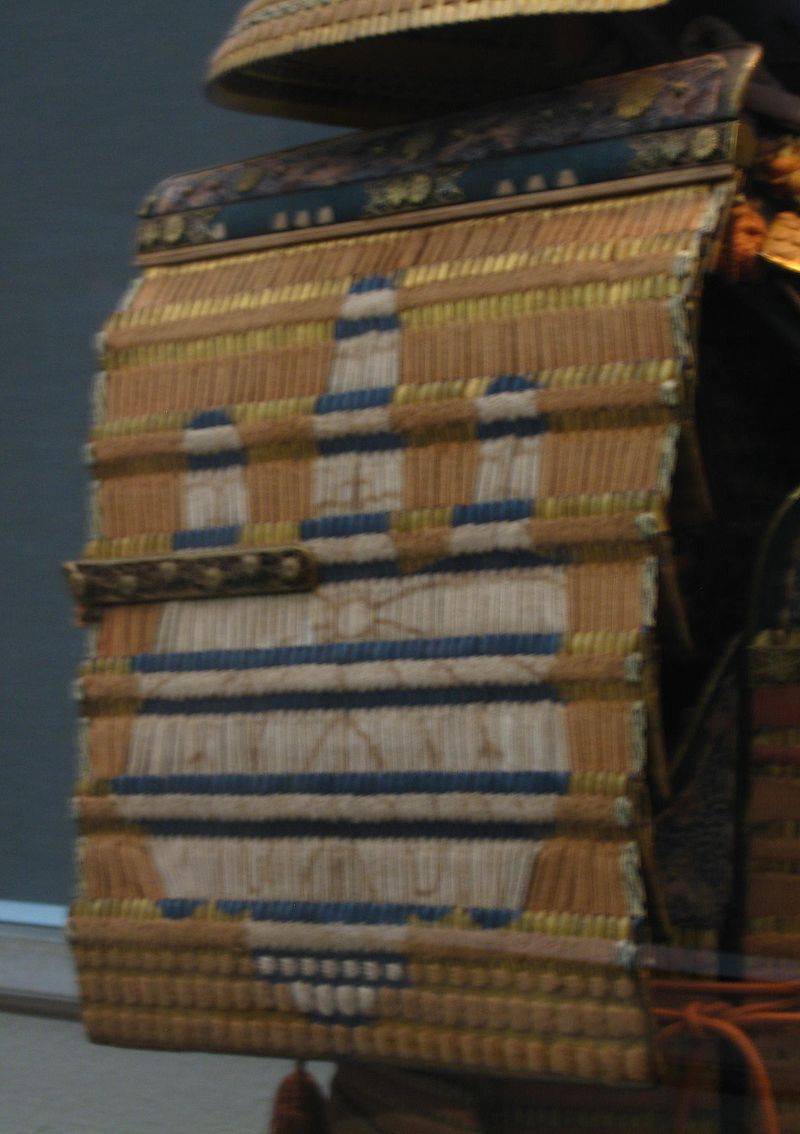 Mon with the image of pavlonia on o-soda - the shoulder pad of Japanese armor. Belonged to the Ashikaga clan.

A characteristic feature of the Middle Ages was its cronyism. However, the clans in Japan meant more than again in Europe. Here a person dissolved in his clan, in Europe - he simply belonged to a certain clan, to a family, but no more than that. Clashes between clans took place everywhere, but it was in Japan that they led to the rise of the samurai class itself and the establishment of the shogunate Minatomo, the first military government in the country's history that resulted from the long rivalry between two clans - Minamoto and Tyra. 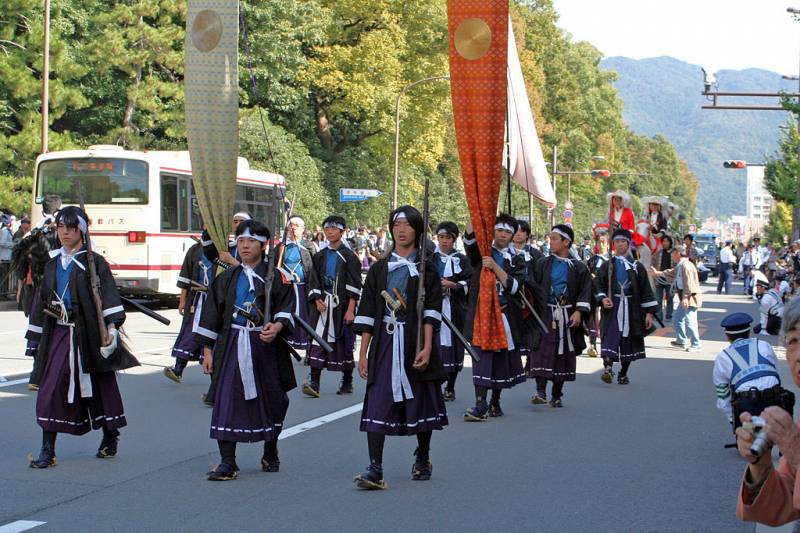 Modern Japanese with the flag of Hata-Jirushi

By this time, the early form of the Japanese military flag hut jirushi was formed - it was a vertically long and narrow panel attached to a horizontal crossbar on a pole in its upper part. Taira had red flags, Minamoto had white. In Tyra they depicted a black butterfly, in Minamoto - the Rindo badge - “gentian flower”. But a simple white cloth was also used without any images. 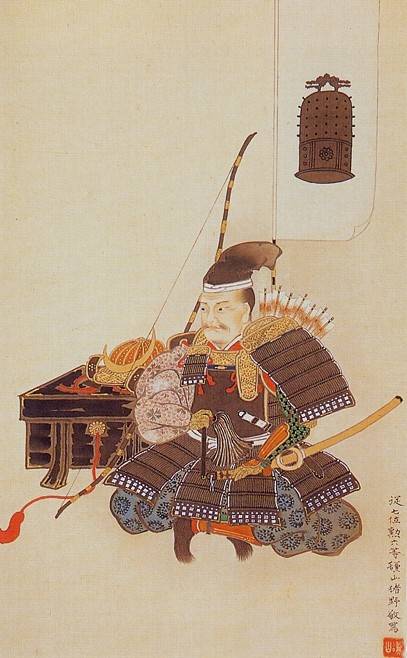 Samurai under the flag of Sashimono with the image of a Buddhist bell. (Museum of the city of Sendai)

Then fashionable ... hieroglyphic texts on white panels. For example, in Asuke Jiro, an active participant in the Nambokutyo war (the Northern and Southern Courtyards), his autobiography was written on the banner, which the samurai traditionally read before challenging the enemy to a duel. The whole inscription can be translated as: “I was born in a family of warriors and loved courage, like the young men of bygone days. My strength and determination are such that I can chop a ferocious tiger into pieces. I studied the path of the bow and learned all the wisdom of war. Thanks to the grace of heaven, I met on the battlefield with the most famous rivals. At the age of 31, despite the attack of fever, I arrived in Oyama to pursue an important enemy, fulfilling the duty of loyalty to my master and not staining myself with shame. My glory will thunder all over the world and go to my descendants, like a beautiful flower. The enemies will take off their armor and become my servants, the great sword master. Hatiman Dai Bosatsu’s will! Yours sincerely, Asuke Jiro from Mikawa Province. ”
Modest man, do not say anything!

However, it is precisely this type of identification that has proven ineffective. From the middle of the 15th century, a growing number of samurai began to fight not with a bow and arrow, but with a spear, and the ashigara infantry began to play the role of archers.

The samurai themselves began to dismount more and more often, and how in the midst of the battle was to find out who was his own and who was a stranger, if everyone wore about the same and very colorful armor. There were small flags that began to mount directly on the armor. These were the sode-jirushi - “shoulder badge” —a piece of cloth or even paper that was worn on the plates of the sode that protected the shoulders. Kasa-jizushi - “badge on the helmet”, which looked like a small flag repeating the pattern on the mind-jirushi. At the same time, kasa-jirushi could be mounted on the helmet both in front and behind. These signs and samurai servants wore vakato, so that in all this you can see the first steps towards the creation of a military uniform. 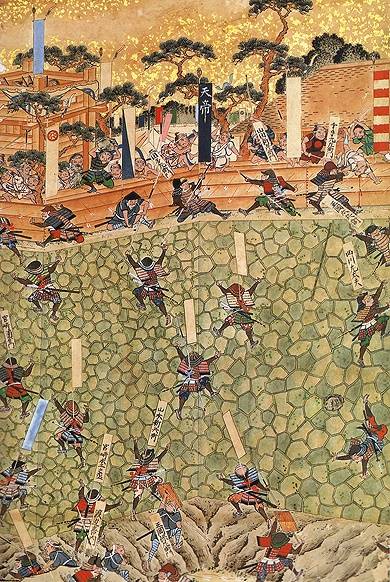 Storm by the troops of the shogun of the castle of Hara.

From the middle of the 15th century, when the samurai armies were divided into units with uniform weapons, the role of recognition increased even more. Now, in the army of one daimyu, units of ashigaru with bows, muskets, long spears, as well as detachments of foot samurai with naginat and horse with long spears could act. All these divisions needed to be effectively managed, they sent messengers to them, who also needed to be quickly identified. Therefore, the number of people wearing flags in the armies of the samurai has increased dramatically. In addition, the old khata-jirushi, whose cloths were often twisted by wind and entangled, which made it inconvenient to view them, replaced the new nobori flags - with L-shaped shafts, on which the cloth was stretched between the shaft and the vertical crossbar.

This picture shows the heraldic insignia adopted by the army of Arima Toyouji (1570 - 1642), who participated in many battles on the side of the Tokugawa clan. 1 - double ashigaru sashimono, white with a black badge, 2 - golden rays sign "sunshine" - belonged to the Arima messengers, 3 - samimonos wore a golden crescent in the form of a golden crescent gold trefoil, 4 - o-crazy jirushi (“big standard”), 5 - nobori with monom Arima Toyouji. Drawing from S. Turnbull's book “Symbolism of Japanese Samurai”, M .: AST: Astrel, 6.

There is a very difficult identification system for a European, according to which the signs are to the ashigaru, others are samurai, the third are messengers, and the headquarters and commanders have a special designation. Nobori usually served to identify individual units within the samurai army, but also simply to show strength.

Thus, in the army of Uesugi Kensina in 1575, there were 6871 people, of whom 6200 were foot soldiers. In turn, out of this number, 402 people wore flags, and there were more of them than arquebusiers!