The same "Spencer." Rifles by country and continent - 10

March 19 2018
76
Many VO readers, having become acquainted with the story about carbines and rifles developed in the USA and used in 60-70 years of the 19th century, in a number of comments commented on why the famous Spencer carbine was not mentioned among them. Accordingly, many would like to look at him and, accordingly, read about him. And the reason for such a “bad attitude” was very simple: according to the plan, the materials in the series “Rifles by Countries and Continents” were to go first about the samples that preceded the sliding gate and, mainly, with reloading on one cartridge. About the famous "Winchester" M1866 on the VO materials have already been, so it hardly made sense to repeat, but about the "Spencer", yes, it was already time to tell in more detail.

Well, the story about this interesting system should be started with a story about its designer, who at the time of creating his famous carbine barely turned 20 years old! A typical “Connecticut Yankee” Christopher Miner Spencer was born in 1833 in a poor family. And so poor that the education of young Crete (as he was called as a child) and could not get it, and everything was forced to learn independently. Already 12 years he left his home and entered the disciples of the hero of Connecticut, unsurpassed gunsmith and the shooter of the well-known then "Kentucky rifle" - Josiah Hollister, who was known for doing weapon to George Washington himself. He taught Crete a lot, and he also infected him with a passion for hunting, in which he excelled and which he practiced until old age. 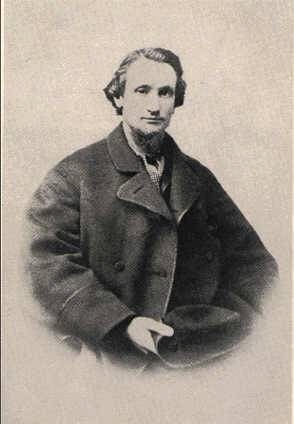 Christopher Spencer in his youth.

In 1854, Spencer began working at the Samuel Colt factory in Hartford, but then went to work for Robins and Lawrence, whose company produced Sharps rifles. And so, having studied this rifle, Spencer thought that its design fully allowed the possibility of turning it into a weapon from which it would be possible to shoot without bothering with the long and troublesome procedure of reloading it. In the very rifle he was fascinated by the simplicity of design: vertically moving in the grooves of the receiver shutter, driven by a long lever, convenient in work, but made in the form of a separate part, bending around the trigger bracket. 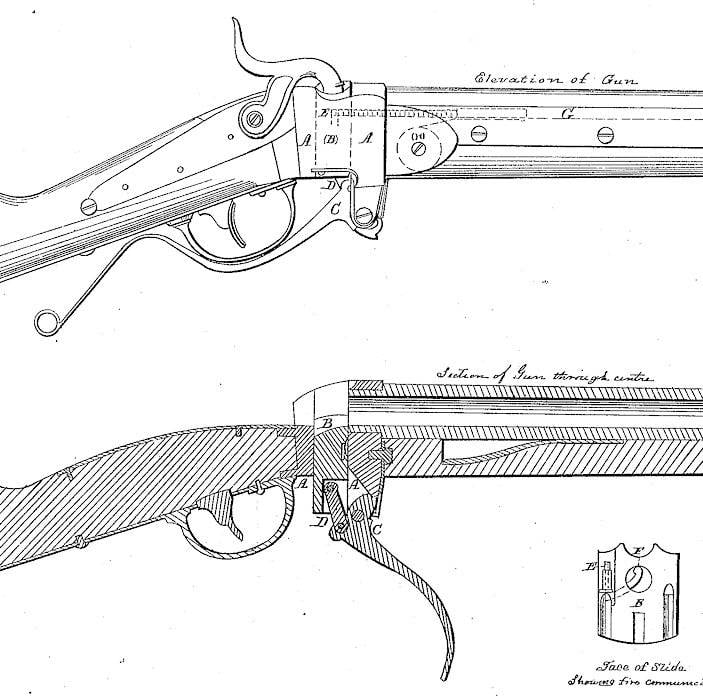 The work was arguing, and now 6 March 1860, Christopher Spencer received a patent for his invention - the magazine rifle - and the "Spencer carbine." Outwardly, this weapon looked like the most ordinary single-shot rifle with a shutter controlled by a lever arm. But he had a "zest": inside the butt there was a magazine in the form of a tube with a spring inside, in which seven cartridges were inserted forward one after the other. At the same time, the spring was compressed, and then in the process of reloading it pushed them out of it one by one to be sent into the chamber. It was necessary to reload the carbine by dragging the lever under the receiver, which, unlike the Sharps system, was designed as a trigger hook. The trigger, however, was not automatically cocked, it had to be manually cocked before each shot. It was possible to store pre-equipped shops in specially designed tubular canisters that contained 6, 10 and 13 shops.

Smith and Wesson cartridges of the 1854 model of the year with a copper sleeve and a pointed pure lead bullet were used for shooting. The first carbines had a .56-56 caliber, well, and the actual bullet diameter was .52 inches. The 45 gran (2,9 g) of black smoke powder was placed in the sleeve, and ammunition of the .56-52, .56-50 and wildcat .56-46 calibers were used. It should be understood in such a way that at that time the calibration of the bullets was somewhat different from that adopted later and had two notations. The first number - showed the diameter of the liner, the second - the diameter of the bullet in the place where it entered the grooves of the barrel. The most popular were carbines of the .52 caliber or 13,2-mm. It should be noted that the .56-56 cartridge was almost as powerful as the cartridges for the largest-caliber musket of the American army .58 caliber, and therefore differed in high lethal force.

The Spencer immediately showed itself as a very reliable and rapid-fire weapon, from which it was possible to fire with a rate of fire exceeding 20 rounds per minute. Compared to conventional blasting rifles, which gave 2-3 shots per minute, this was, of course, fantastic. However, the lack of effective tactics prevented him from appreciating. Detractors pointed out that when shooting there is so much smoke that it was difficult to see the enemy behind him, and that the situation on the battlefield would be as if the soldiers were standing in thick fog, and therefore there would be no point in fast shooting. 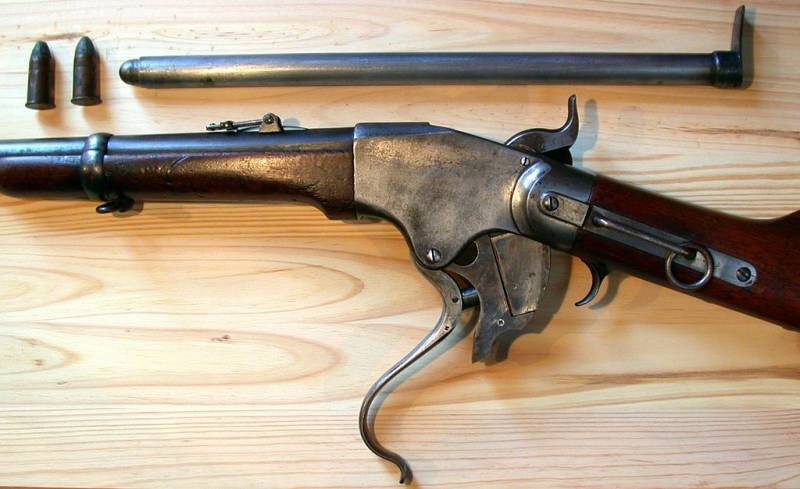 Spencer M1865 carabiner open-bolt. Above it is the cartridges and the shop.

Weapons capable of shooting several times faster than existing single-shot carbines would also require a significant restructuring of the supply lines and create a greater load on the already overloaded railways, would require tens of thousands more mules, wagons and locomotives. In addition, with the money that cost one Spencer carbine, it was possible to purchase several rifles of Springfield, which was also not in his favor.

On the other hand, the advantage of the “spencer” was its ammunition, which was waterproof and could withstand long-term storage and transportation in shaky carts. Meanwhile, the experience of the war showed that the same, for example, paper and linen ammunition for the Sharps rifle, transported in railcars by rail or after long storage in warehouses, were often dampened and therefore spoiled. Spencer's ammunition had no such problem. 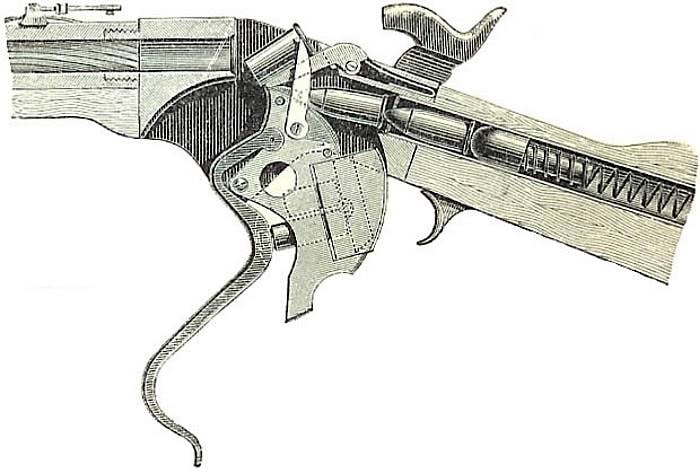 The principle of the mechanism of the Spencer carbine: extraction of the spent cartridge and the filing of the next cartridge.

The principle of the mechanism of the Spencer carbine: the shutter is closed and locked, the trigger is cocked.

The war between the North and the South created an excellent market in the country for weapons of sometimes dubious quality, and Spencer, who believed in the high combat characteristics of his model, hastened to enter it as soon as possible. In the summer of 1861, at the Chickering Boston factory, he placed an order for the first prototypes of his carbine, and then began to look for ways to the White House. Fortunately for him, his friend in Washington turned out to be a friend of the Minister of the Sea, Gideon Welles, who helped Spencer get an audience with the Minister. Welles immediately ordered a comparative test of his carbine, comparing it with Henry's rifle. The result of the competition was the first government order for 700 carbines for the American fleet. 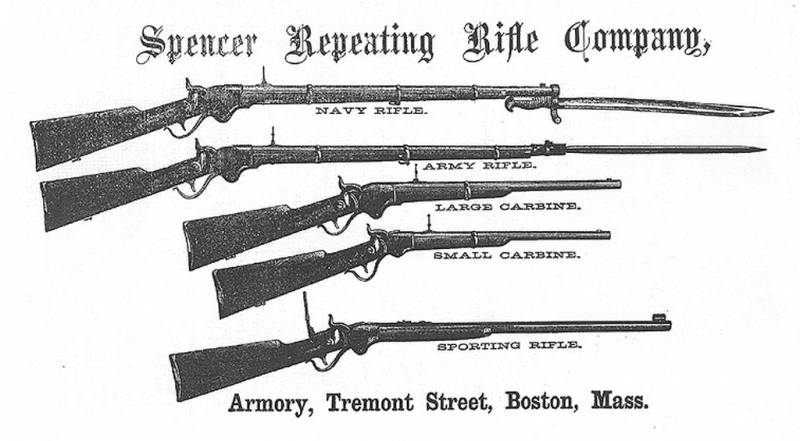 American poster showing samples of Spencer rifles and carbines. From top to bottom: a rifle for the Navy with a bayonet-yatagan, an infantry rifle, a “big carbine”, a “small carbine”, a sport rifle.

It is believed that the first shot at the enemy from the Spencer carbine was made on October 16 1862 of the year during a shootout near Cumberland, Maryland. The carbine was used by a friend of its creator - Sergeant Francis Lombard from the 1-th Massachusetts cavalry regiment. Soon carbines at their own expense began to buy and other mobilized. Shipments of carbines to the fleet began in December 1862 of the year. All 700 units were made in six months, after which these carbines armed the Mississippian airborne brigade, and Spencer began to seek to extend the contract with the federal army, although the rate of fire of this weapon still caused great doubts from the federal generals. 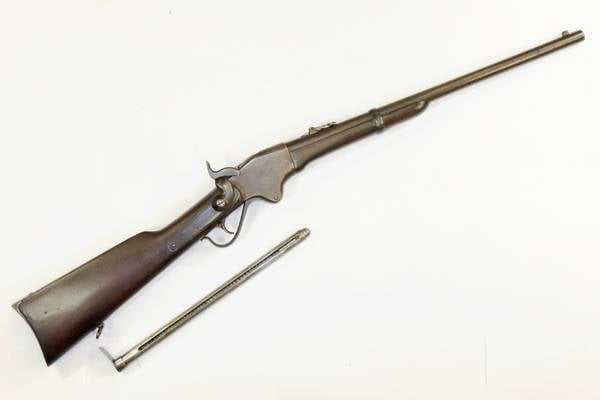 The first commander of the Armed Forces of the Union, General Winfield Scott, turned out to be the most decisive opponent of the armaments of the northerners with the Spencer carbines, because he believed that this would only lead to a waste of ammunition. However, Spencer was able to get through to the reception to Abraham Lincoln himself, and he personally tested his carbine, was very pleased with them and immediately ordered his production for the army to begin. With this sanction of the supreme commander and began his triumphal march on all fronts of internecine war in the States. 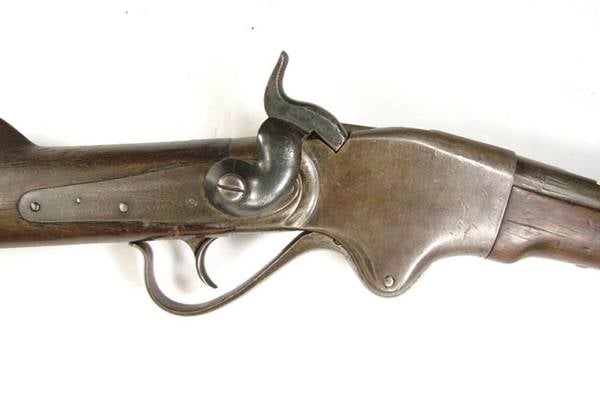 First of all, Spencer's carbines were sent to the elite units of the “Army of the Potomac” - “Arrows of the United States”, which made up the brigade of Colonel Hiram Berdan. 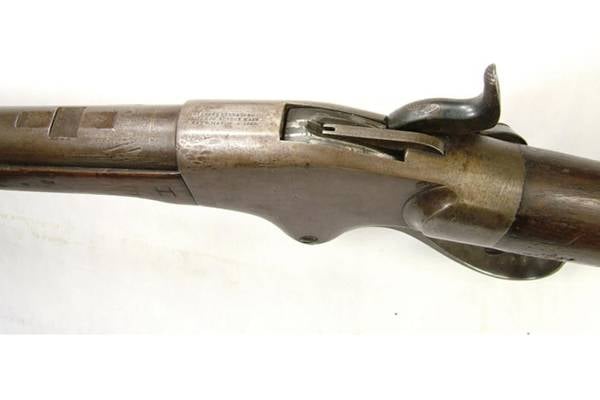 Receiver. View from above.

From the middle of 1863, not only the elite, but also the usual infantry regiments of the northerners began to arm it with magazine rifles. There are cases of their use in the Battle of Gettysburg, in the “Battle of Hoover”, where the “Lightning Brigade of Colonel John T. Wilder” armed with them operated very effectively, as well as in other places. They showed themselves well in the Battle of Hanover, in the Chattanooga campaign, during the Battle of Atlanta, and in the Battle of Franklin, where the Northerner soldiers inflicted great damage on the Southerners in manpower. Well, the last "military" carbine Spencer entered service 12 April 1865 of the year. 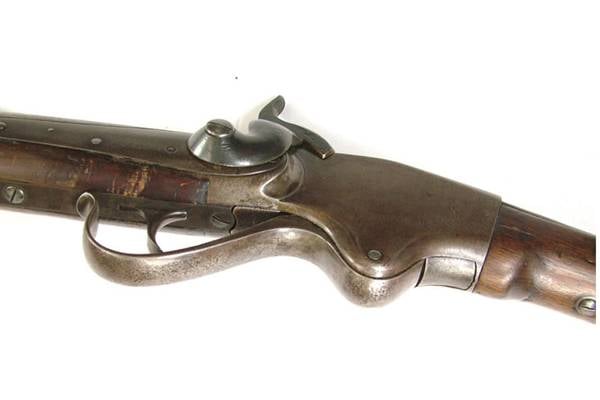 View of the reload lever. The internal mechanism is well protected from contamination.

In the battle of Nashville 9 000, mounted riflemen armed with Spencer carbines, commanded by General Major James Wilson, bypassed General Hood's left flank and attacked him from behind, exposing his troops to a killing attack. By the way, the assassin of Lincoln President John Wilkes Booth also carried Spencer's carbine at the time when he was captured and killed. 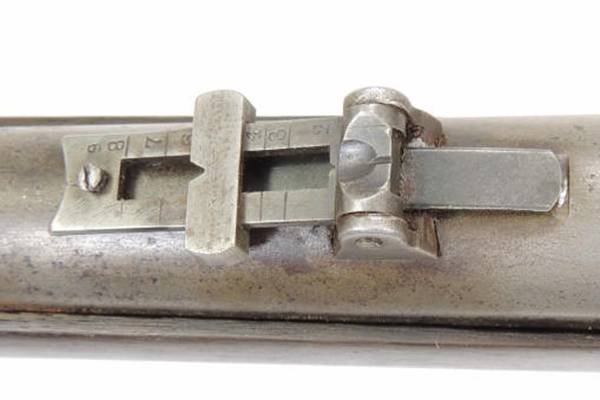 At the end of 1860, Spencer’s company was sold to Fogerty Rife Company and, ultimately, Winchester. After that, Oliver Winchester stopped the release of Spencer carbines, and sold the remaining butts for firewood to get rid of the only worthy competitor. Many Spencer carbines were later sold to France, where they were used during the Franco-Prussian war in 1870. Despite the fact that Spencer’s company went out of business in 1869, cartridges for its carbines in the United States were made even in the 20s of the last century. 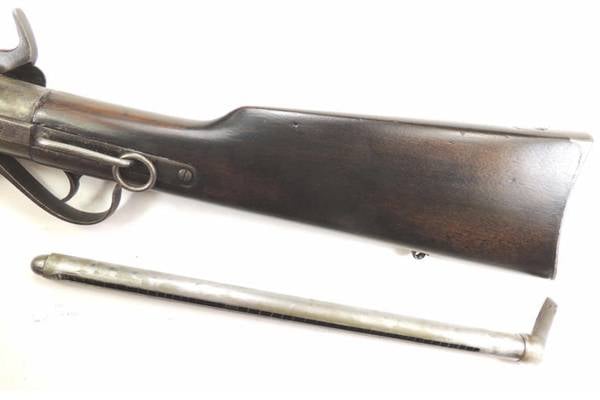 Butt and shop with a characteristic protrusion to extract it from the nest.

It can be said that the “spencer” of the 1860 of the year became the first American magazine rifle, moreover, produced in the USA in more than 200 000 copies by three manufacturers from 1860 to 1869 a year. It was widely and successfully used by the army of the Union, especially the cavalry, although it did not replace completely old single-shot samples that were used at that time. The Confederates sometimes captured them as trophies, but since they could not make ammunition for it due to the lack of copper, their ability to use it was severely limited. 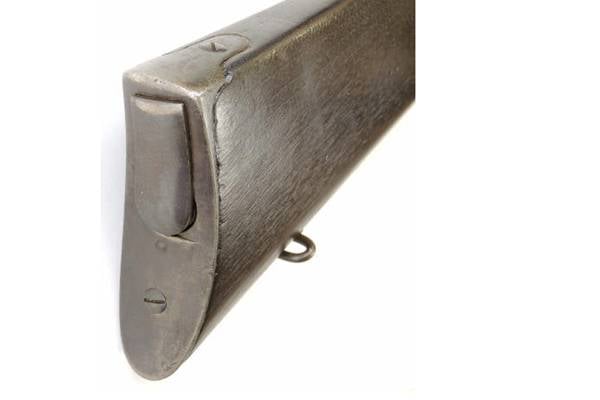