March 16 2018
17
This war has been going on for seven years now and is drawing in more and more new participants. Criminal “skirmishers” of this war (above all, overseas) are doing everything possible to ensure that it lasts and lasts further. And at the same time, they constantly build themselves peacemakers and humanists, saying that they want it to cease. By itself, this major political speculation unleashes the hands of terror and contributes to the death of the civilian population. Every speech by an American or European official on the theme of “peace in Syria” is a declaration for terrorists that they can do anything. 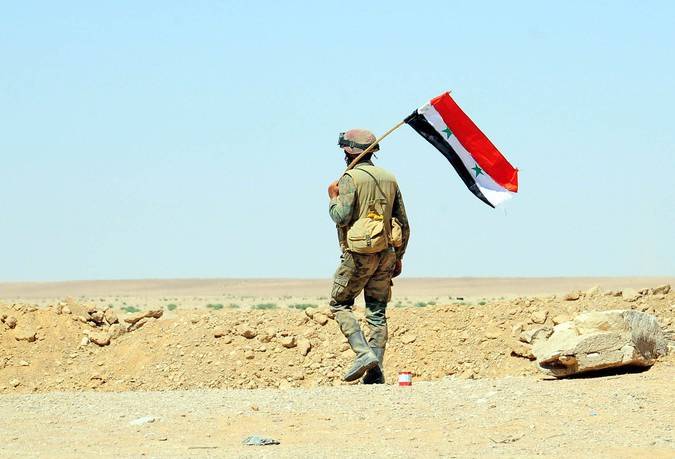 March 15 The first riots broke out in the Syrian city of Daraa. But these were not the first unrest that broke out in the Middle East region. Power has already changed in Tunisia and Egypt, Libyan cities have already burned in the flames of a terrorist war. The case was going with might and main to the NATO bombing of Libya, against which only Syria was opposed in the Arab world.

Interestingly, if it were to return seven years ago, would the position of those Arab players who approved the actions of the West in the region be the same? Saudi Arabia and Qatar - everything is clear with them. These obedient US oil monarchies are more “pro-American” than America itself. And what about neighboring Lebanon with Syria? And Jordan? These countries were directly affected by the Syrian conflict, and the threat of terrorism has arisen for them, and the problem of refugees makes itself felt.

And then, seven years ago, two countries - Libya and Syria - put up active resistance to world gangsters, who were trying to redraw the whole region. Libya lasted eight months and fell under the onslaught of NATO forces working together with internal traitors.

Syria has been holding for seven years. Keeps at an incredible price. Practically in all cities and villages under the control of the army, there are portraits of soldiers and civilians who died at the hands of terrorists, both local and international. And every day the number of such sad portraits increases.

Syria has not yet turned into Libya (a state that actually does not exist anymore) thanks to these guys, who are now looking at their native landscapes from portraits. Thanks to the living - to those who are now fighting in Eastern Gute, who are defending the provinces of Latakia and Tartus, who liberated Aleppo. Thanks to the resilience of an intellectual, a doctor, President Bashar al-Assad, who has long been sentenced to death, but did not run away like Yanukovych. He turned out to be much more courageous than the old warriors who stood at the head of Tunisia and Egypt and were unable to organize any resistance. Thanks to Iran and Hezbollah, which from the very beginning announced solidarity with Syria. And, of course, thanks to Russia and its warriors, who came at the end of 2015 to help the exhausted but not surrendered country.

Syria is now facing a new threat. The threat of large-scale provocation. Actually, this war was held on provocations. As soon as a truce was planned, followed by an end to the war, some sort of “nastiness” followed, which broke all agreements. Now the West has a “favorite” weapon - fake test tube, allegedly with some chemical "rubbish". Now, not only Syria is accused of using chemical weapons, but even Russia (yes, these two conflicts - around Syria and around Skrypal - are difficult to separate from each other. These are two episodes of the same global confrontation of different scale).

Is it possible to somehow objectively calculate (at least approximately) the number of human lives that the seven-year Syrian Golgotha ​​claimed?

At the moment, data have been published very odious organization: the so-called Syrian Observatory of Human Rights. This office, which is based in London, has been caught repeatedly in lies and falsifications. But, since we have no other data yet, we will consider its statistics. According to her, 353 thousands of 935 people died in seven years.

True, the question then arises: how was it possible to calculate exactly to the person when there were so many missing? Okay, go ahead. The Syrian army, according to these data, has lost 63 thousands of 820 soldiers. Fighters of the national militia, Hezbollah and other friendly forces of Syria - 58 130 thousands. But the loss of terrorists: 63 thousands of 360 members of the "Islamic State" and "Al-Qaeda" (banned in the Russian Federation) and 62 thousands of 39 people - from the "moderate opposition". Losses among civilians, according to the same organization: 106 thousands of 390 people (without specifying who died from whose hands and how many people whose lives were killed by the pro-American "coalition" bombing).

Even from these data it is clear what losses the Syrian army and friendly forces suffered. This number is about the same as the loss of terrorist groups. What kind of "popular uprising" can we talk about? If there really was a certain "popular uprising", the number of dead "moderate oppositionists" would have to significantly exceed the number of dead soldiers. It is clear that the regular army fights more professionally than the so-called “rebels”, who are supposedly “from the people”.

And the truth is simple: the units of this very “opposition” from the very beginning were trained, trained, supplied with weapons, ammunition, replenished with foreign mercenaries brought to Syria from around the world. There was no "popular uprising". There was a carefully planned and prepared aggression against the Syrian state. At first it was carried out by the hands of terrorists, and now they have been joined by other forces that mercilessly bomb the country.

And the worst of all is that they threaten to increase the intensity of these bombings and without any UN mandate, without any cover by the “anti-terrorist struggle” - to kill the Syrians en masse and already in the open. Russian diplomats are fighting as best they can with this terrible force. The General Staff of Russia has had its say: a response may be followed to attacks on Damascus bypassing the UN Security Council. It remains to hope that such determination will help stop the provocation and overt aggression, otherwise the consequences will be the most disastrous.

On the anniversary of the beginning of the Syrian war, it is worth remembering all the fighters of the Syrian army and the militia, all the Russian military, all civilians who no longer see the Victory. But Syria has no other choice but Victory.

Ctrl Enter
Noticed oshЫbku Highlight text and press. Ctrl + Enter
We are
Reports from the militia of New Russia for 27-28 September 2014 of the yearResults of the week. "Well, do not change me because of every idiot!"
Military Reviewin Yandex News
Military Reviewin Google News
17 comments
Information
Dear reader, to leave comments on the publication, you must sign in.