Poroshenko found an alternative to war

March 15 2018
20
For Petro Poroshenko and his inner circle, the question of maintaining power, without any exaggeration, is extremely important. It depends on him not only the safety of their business and capital, but perhaps freedom, and even life. The property of the junta’s leader is more than enough, and there are so many people who want to settle scores with him that becoming a persecuted stateless person like Saakashvili after losing the presidential chair would be a tremendous success for him. 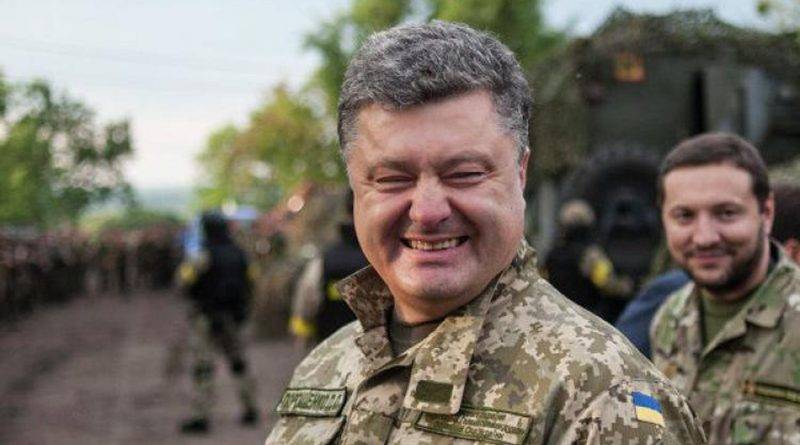 And so for this chair Poroshenko will hold with all his might. Moreover, his popularity in Ukraine is such that he is unlikely to be re-elected, even taking into account the administrative resource.

Finding a successor to whom to transfer power, under the guarantee of personal safety and the inviolability of property, is also unlikely. Having made his business, including on the “kiddies”, Poroshenko understands this very well.

Most experts agree that the only chance for the leader of the junta to preserve power (as well as life and capital) is the cancellation of elections under the pretext of martial law.

The easiest way to justify it is the civil war that has been taking place for the fourth year. But, not by that sluggish conflict, with shelling of the positions of the defenders of the People's Republics and “toad jumps” in the “gray zone”.

We need quite intense fighting, with a large number of forces involved, with significant losses. So that in every town there is a solemn funeral, so that civilian hospitals and their morgues in Central and Western Ukraine will be packed with cyborg. So that the population, who have already had time to get used to the "dull" "ATO", felt that a real war was going on. So that everyone acknowledges: under the conditions of “large-scale Russian aggression”, martial law is not just justified, it is necessary.

But here, as they say, there are nuances. Moscow has repeatedly and unequivocally made it clear that a large-scale attack on the People's Republic will not be left unanswered, and will force the Russian Armed Forces to conduct an operation to force the Kiev junta to peace.
Verbal warnings are confirmed by very specific steps.

For example, on the border with Ukraine and the People's Republics, the 8 Army is deployed, practically all of whose commanders have experience of participating in peacekeeping operations.

Moreover, it is not at all necessary that within the framework of "coercion" Russian troops, in accordance with Brzezinski’s dreams, will be able to be drawn into protracted urban battles.

Recall that the late political analyst wrote: “We should turn to the lessons we learned from episodes of resistance in the conditions of cities during the Second World War and the war in Chechnya, whose capital was the site of fierce fighting for three months. The bottom line is that in order for intrusion attempts to be successful in a political sense, it is necessary to capture the largest cities. If large cities, such as Kharkov or Kiev, begin to resist and fighting in urban conditions will not be avoided, the conflict will be prolonged and entail huge costs. ”

However, it is not the liberation of the whole of Ukraine, with numerous costs, but an exit to natural boundaries — for example, along the bank of the Dnieper, or the LDNR borders coinciding with the administrative borders of the former Donetsk and Luhansk regions — that can be a sufficient outcome of a peace enforcement operation.

Be that as it may, but a new large-scale aggravation in the Donbass, especially if Russia is drawn into it, would mean another defeat of the Armed Forces of Ukraine, and most likely, Poroshenko’s fall, even without the “fighting in Kiev”.

In addition, this scenario is unlikely to suit the United States. Since he, having extremely exposed all the "pitfalls" of the confrontation, will significantly reduce the space of political maneuver and manipulation, depriving Washington of the possibility of his favorite game of raising stakes. After that, the Americans will have to either “open the cards” or say “pass”.

Dead end for the leader of the junta, it would seem. But Poroshenko, or one of his advisers, found a way out of such an unfavorable situation. And what if to declare martial law in the country not because of a direct "external attack", but because of an internal, or "hybrid" war?

It seems that exactly this option is trying to implement Poroshenko today. This is evidenced by the energetic actions of the SBU.
Recall that the March 8 held the arrest of the head of the Prisoners' Liberation Center "Officer Corps" Vladimir Ruban, suspected of "preparing an act of terrorism to assassinate the President of Ukraine, the heads of law enforcement agencies of Ukraine and other government officials and law enforcement officers; killing a large number of people in Kiev; destruction and damage to buildings and infrastructure in the government quarter; create a "state of chaos."

According to the Security Service of Ukraine, Ruban planned bombardment with mortars, grenade launchers and small arms weapons Verkhovna Rada, the Presidential Administration and other buildings in the government quarter during their stay at a meeting of the presidential parliament, leaders of law enforcement agencies and other government officials.

The "conspirators" allegedly planned to seize the Verkhovna Rada at night, killing the law enforcement officers who were guarding it. And also to carry out armed attacks on the housing of statesmen and political leaders, in particular, Petro Poroshenko, Arsen Avakov, Arseniy Yatsenyuk, Oleksandr Turchynov and others in order to kill them.

Now they are trying to “pull up” Nadezhda Savchenko, a deputy of the Ukrainian parliament, to this business. 12 March SBU summoned her for questioning in the case of the detainee, but she left the territory of Ukraine.

Ukrainian media have already claimed that, in fact, Savchenko is the main suspect. That she allegedly has been preparing a coup for half a year, for which she recruited Ruban, who was supposed to deliver her weapons from the DPR. In the "conspiracy" is also involved one of the battalions that fought in the "ATO" zone, ready to stand under the banner of Savchenko.

In addition, according to the statement of the head of the SBU administration Igor Guskov, Ruban worked closely with the “Ukrainian choice” Medvedchuk and led one of the projects related to the federalization of Ukraine.

Also, the Ukrainian media, citing sources in the Security Service of Ukraine, associate Ruban with oligarch Igor Kolomoisky and his “Dnepropetrovsk team”.

So, according to UNIAN, the oligarch's closest associate, Gennady Korban, publicly stated that Ruban was engaged in negotiations on the exchange of prisoners in close cooperation with people of Kolomoisky, and called him "our man."

Even earlier, the “hut” (as the SBU is called in Ukraine) carried out over 25 searches of individuals who allegedly “assist the aggressor country in conducting anti-Ukrainian actions”.

“During the searches, propaganda materials, weapons, explosives and many other evidences of subversive work against our country were seized. More detailed information will be made public on the SBU website after the completion of all necessary legal proceedings. Unfortunately, among these citizens there are those who are related to the journalistic workshop, ”announced SBU press secretary Elena Gitlyanskaya.

It is likely that these "anti-Ukrainian persons" will try to attach to the "Ruban's case", which Poroshenko and his associates are trying to turn into a "process of the century."

The goals of this grand provocation are obvious. First, to create a pretext for large-scale political repression to eliminate their opponents, and possibly commercial competitors. Secondly, this provocation can be used to toughen the regime, up to the imposition of martial law on the eve of elections, under the pretext of an allegedly terrorist threat from Russia.

Thirdly, the fact that a significant part of the supposed participants, “the desires of the century,” declared “pro-Russian,” will be used by the Poroshenko clique to rise in the eyes of the Ukrainian nationalists, whom they are really afraid of. It is possible that the Ukrainian “leader”, under this “process”, may even allow Banderovites to hold a “crystal night” against Ukrainians and organizations declared “pro-Russian”.

It must be said that in the Ukrainian society the “Ruban's case” does not cause much confidence. However, Poroshenko has few options. So you have to use what you have without being picky.

Ctrl Enter
Noticed oshЫbku Highlight text and press. Ctrl + Enter
We are
Situational analysis of the death of the MH17 flight (Malaysian Boeing 777), made on the basis of engineering analysis from 15.08.2014Results of the week. "God forbid to see Russian revolt, senseless and merciless!"
Military Reviewin Yandex News
Military Reviewin Google News
20 comments
Information
Dear reader, to leave comments on the publication, you must sign in.