March 15 2018
60
Gazprom chairman Alexei Miller, having met with Russian Prime Minister Dmitry Medvedev this week, said whether the company intends to terminate contracts with the Ukrainian Naftogaz, and if so, when exactly. According to Alexey Miller, the contract gap cannot be immediate, since a whole range of (bureaucratic) procedures must be observed, and therefore the contract will be terminated not earlier than 2019 of the year.


With such a statement, which was mostly addressed to Ukrainian and European “partners” rather than to the Russian prime minister, Gazprom makes it clear that, in fact, it does not intend to terminate the current contract before its expiration date. The fact is that the contract concluded in 2009 and for which, by the way, Yulia Tymoshenko has already managed to “sit down,” ends exactly in 2019, 31 in December.

The meaning of the statement is also that Ukraine is indirectly asked a question: what are you, a “friend”, going to do if gas supplies and gas transit, which, we must not forget, are also provided by the contract, also stop? The gap (or termination) of the contract implies a complete lack of prospects for virtually the entire Ukrainian economy. But who cares about it today at all? ..

For only one transit of Russian gas (even without taking into account the “anti-aggressor” theft from a pipe), Ukraine earns from 1 to 2 billion UAH per year. Today, Kiev is trying to beg for smaller sums from the IMF, but the IMF simply “drops” calls, each time answering in absentia that a number of conditions of the International Monetary Fund are not fulfilled in Ukraine.

In 2015 and 2016, the level of transit of Russian gas to Europe through the gas transportation system of Ukraine was approximately 67 billion cubic meters. This is more than impressive transit volumes, which Ukraine could have saved if it had at least some state subjectivity. Instead of subjectivity today - a monkey with a pipe. What are the guarantees for the supplier and the buyer of “blue fuel”? - a thing absolutely unpredictable. And therefore, behind the scenes, both the supplier and the European buyer are interested in the fact that in the presence of a monkey with a pipe, this very pipe would be empty.

It is clear that in the old Europe, no one recognizes this openly, nor does it openly admit that they would have long been happy to cut the ribbon on the Nord Stream-2, and then at least the grass in Ukraine does not grow. But at the same time, they understand that this evil, maidan-afflicted organism, which is also deprived of the main energy source, can rush in a westerly direction. This organism doesn’t care what direction to shout about “protecting the civilized world”, if only the floods flowed against the background of the total cut of the remaining under-sawn assets. They do not flow by themselves - they will beg, crawl on their knees, smeared with mud and shit, it does not matter - with Russian or European passports in their hands as “proof of aggression” - perhaps someone will regret it.

Now Ukraine has a chance. It is associated with several factors. The first: the desire of the West (first of all, the United States, of course) to use the Ukrainian plague territory to weaken Russia (which, at least, has been happening in recent years). The second is a suspension with transit for Gazprom itself, which would have said long ago, “drown with dung fish,” but there is currently no alternative to the Ukrainian transit. Moreover, the second (concern of Gazprom) is a more significant factor, since Europe, for a long time, to put it mildly, looks askance not only at Ukraine, but also at the United States, which, demanding support from the EU (including in Ukraine), they themselves, in fact, frankly turn to master-vassal relations. Take at least the recent gift of Trump in the form of increased duties on European metals. There he got to the Ukrainian as well, but the master is not going to deal with the degree of vassal in this situation. Only blind obedience!

Here we recall such an important nuance for Ukraine as the statement of Hyuga Mingarelli (EU representative for Kiev). Mingarelli actually made it clear to Ukraine that it has the ability to save transit in virtually all cases for itself: to attract European companies to manage the Ukrainian gas transportation system. At the same time, it was also a signal to Gazprom: if the CTS at least partially passes into the hands of European companies, then a) Ukraine will not be able to steal gas, b) Ukraine will not be able to blackmail those who from both ends of the pipe and, as a result, ) you, in Gazprom, could save the gas route to Europe through Ukrainian territory. 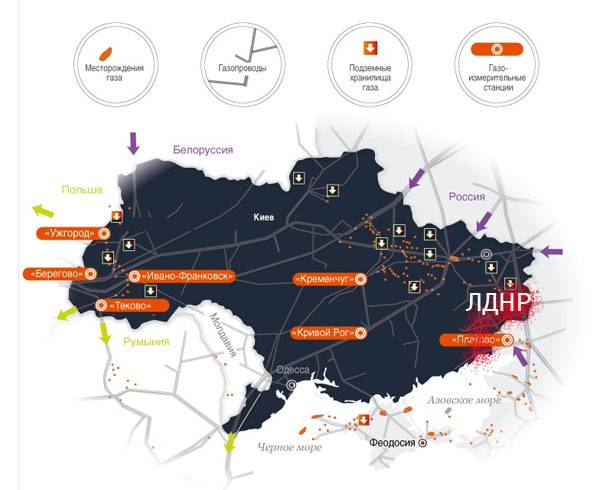 Several months have passed since that announcement, but the situation has not progressed much. It is clear why. In "Naftogaz" understand that as soon as the signature on the document on the agreement with European companies will be delivered, so goodbye to the total control over the transit. At the very least, it will be necessary to work more thoroughly with statements both in the direction of Gazprom and in the direction of the EU. This is not so "fun" for a monkey with a pipe, because the pipe will be firmly held on both sides - it’s not particularly frolicking ...

In such a situation, Gazprom decided to sustain the Mkhatov pause also because the appeal was filed by the decision of the Stockholm arbitration. This arbitration, as is known, obliged the Russian company to pay 2,56 billion dollars to Naftogaz. There is a pause here, rather, for the Europeans - on the subject of whether such insinuations of various European courts will be repeated if Gazprom nevertheless agrees to keep the Ukrainian transit even after 2019 of the year? If Stockholm insists on the payment, then the chances for the Ukrainian GTS will remain slim - only bypassing, only hardcore!

Thus, a combination of several components can save Ukrainian transit of Russian gas in more or less serious volumes: positive (in relation to Gazprom), a decision on appeal to the verdict of the Stockholm arbitration and access with European companies directly to the Ukrainian pipe (albeit with the participation of "Naftogaz") - so as not to tyril.

Against this background, Naftogaz agreed to enter into negotiations with Gazprom to terminate the contract. A real “surprise” for both the Ukrainian people and the Europeans will be if Naftogaz itself, under pressure from “friends from Washington”, agrees to terminate the contract, and then shout a good word about the fact that its pipe is empty, and for that give compensation ... That is, the Ukrainian bet on "zero"?

Ctrl Enter
Noticed oshЫbku Highlight text and press. Ctrl + Enter
We are
Situational analysis of the death of the MH17 flight (Malaysian Boeing 777), made on the basis of engineering analysis from 15.08.2014Results of the week. “In our cooperative, the board is always agreed”
Military Reviewin Yandex News
Military Reviewin Google News
60 comments
Information
Dear reader, to leave comments on the publication, you must sign in.